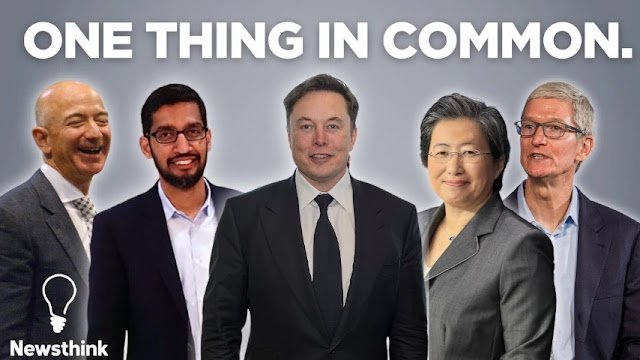 These days, the heads of some of the most successful companies in the world have one thing in common. They are engineers.

For those who aspire to one day become the CEO of a company, an MBA – a Master of Business Administration degree – used to be the way to go. But this is no longer so true. Harvard Business Review used to publish an annual list of the top 100 best-performing CEOs.

In 2018, they found that for the second year in a row, there were more CEOs with engineering degrees than MBAs. 34 compared to 32. Some had both. Getting an MBA can come with a hefty price tag.

Top graduate schools like the University of Pennsylvania’s Wharton or Harvard Business School will set you back more than $200,000. Now, some CEOs are telling you to save your money.

In an interview with the Wall Street Journal, Elon Musk even said, “I think there could be a lot of companies running MBAs”. He believes that people with business degrees spend too much time in board meetings when their focus should be on the product.

The thinking is that if the product is good then so will the profit. In Musk’s case, that means building great electric cars at Tesla or the great reusable rockets at SpaceX. That’s where being an engineer is helpful.

Their background in math, science, and technology allows engineers to design, build, manufacture, and improve their products. And they can help solve challenging technical problems that might otherwise sabotage their dreams.

Technically, Musk has degrees in physics and economics, not engineering. He is a self-taught engineer who reads books to learn about rocket science.

When engineering consultant Sandy Munro interviewed him for his YouTube channel, Monroe Live, he said it was Musk’s knowledge that sets him apart. I was blown away. I’ve seen dozens of CEOs. I’ve never seen a CEO or president who knows more about the product. That technical know-how that comes with an engineering background goes a long way towards building better products.

Just ask Microsoft engineer Satya Nadella who became the CEO. When he took the top position in 2014, he had to figure out a way to make Microsoft relevant as it faced an onslaught from Apple. Now we need to make Microsoft a success.

The software company struggled to thrive under the leadership of its predecessor, Steve Ballmer. Its products were far from revolutionary. The Surface was the answer for the iPad, Windows Phone, and iPhone. Ballmer has degrees in math and economics from Harvard, which helped balance the books, but didn’t do much when it comes to innovation.

When Nadella took over, he turned to Microsoft – moving its software to non-Windows devices. For example, bringing Microsoft Word to the iPad and iPhone. They also expanded their cloud business Azure which has become the biggest rival to Amazon’s AWS.

In his first email to employees as CEO, Nadella wrote: “Our industry doesn’t respect tradition – it only respects innovation.” That innovative spirit of engineering saved Microsoft. But it’s not easy. It requires risky steps and failure should not be accepted.

As the American inventor, Thomas Edison famously said: “I haven’t failed. I’ve only found 10,000 ways that won’t work.” British engineer, James Dyson, knows a thing or two about never giving up. He got frustrated when a vacuum he had in the house was losing suction.

So he decided to build a better vacuum himself. He spent 15 years working with over 5,000 different prototypes for the bagless design. The payoff for his persistence was a multi-billion dollar company that bears his name.

To be successful, Dyson was invested in the finer details of his company. Engineers aren’t afraid to be involved in day-to-day business—especially when it comes to getting hired. Amazon is notorious for having tough interviews.

Bezos, who holds a degree in electrical engineering and computer science, used to personally meet every candidate in the early days of Amazon. He used to ask strange questions like: How many gas stations are there in America?

He was not behind the correct answer but wanted to see if the candidate had an analytical approach to come up with an informed response. Bezos once said that setting the bar high for hiring was the single most important factor in the success of an online retailer.

It’s no surprise that engineers have made it to the top of the tech industry, which has seen explosive growth over the years. But they are also doing well in non-tech companies. Like Jeffrey Sprecher, CEO of the holding company that owns the New York Stock Exchange.

He has a degree in Chemical Engineering. I’ve never had a job that had anything to do with chemistry, but the discipline I got there taught me about problem-solving and business. Engineers are very good at solving problems and this is the key to everything from building a bridge over a river to designing a rocket to go to Mars.

Thanks for reading till the end. Comment what’s your opinion about this information “Why So Many CEOs Are Engineers”.

2 thoughts on “Why So Many CEOs Are Engineers”