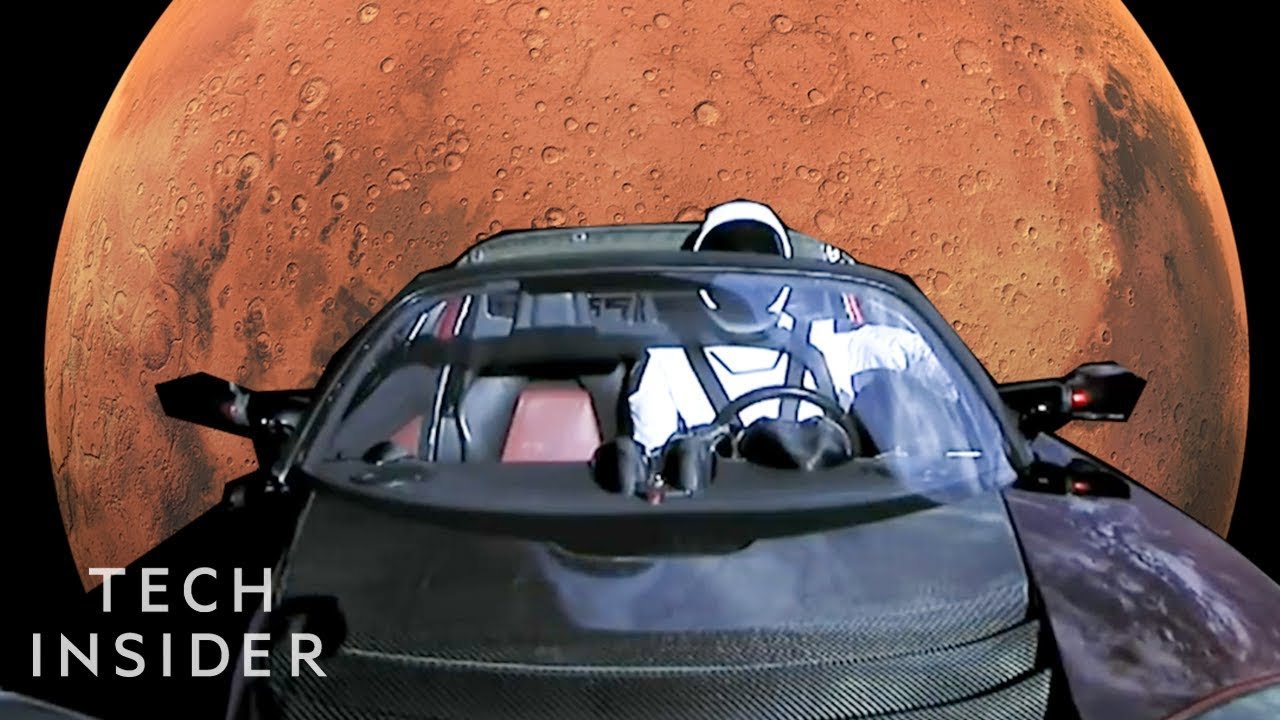 Why Elon Musk’s SpaceX Sent a Tesla Roadster to Space on a Falcon Heavy?: We all know about Elon Musk. This founder and CEO of half a dozen companies are always known for doing unusual things. And when they sent the Tesla Roadster into space, people thought it was the weirdest thing ever sent into space and there was no point in wasting so much money for a dummy object to be sent into space.

But trust me, it really helped SpaceX assess a lot of things and they are still collecting the data today, more than two years later. So, let’s discuss “Why did Elon Musk send the Tesla Roadster into space?“

In March 2017, SpaceX’s founder, Elon Musk, said that because the launch of the new Falcon Heavy vehicle was risky, it would take “the strangest thing we can imagine”. In June 2017, one of his Twitter followers suggested the silly thing to be a Tesla Model S, to which Musk replied “Suggestions welcome!”.

In December 2017, he announced that the payload would be his personal “Midnight Cherry Tesla Roadster”. Later that month, pictures of the car before payload encapsulation were released.

One of the objectives of the test flight was to demonstrate that the new rocket could carry payloads to Mars orbit. Elon Musk’s Tesla Roadster is an electric sports car that served as a dummy payload for the February 2018 Falcon Heavy test flight and became an artificial satellite of the Sun.

“Starman” – a mannequin dressed in a spacesuit, occupies the driver’s seat. The car and rocket are products of Tesla and SpaceX respectively, both companies headed by Elon Musk.

The 2008-model roadster is personally owned and was previously used by Musk for commuting to work. It is the first production car to be launched into space and orbit the Sun.

The car on the second stage of the rocket gained enough velocity to escape Earth’s gravity and enter an elliptical heliocentric orbit, crossing the orbit of Mars. The orbit reaches its maximum distance from the Sun at an indifference of 1.66 astronomical units.

During the early part of the journey outside Earth’s atmosphere, live video was broadcast back to the Mission Control Center and live-streamed for a little over four hours. Advertising analysts noted Musk’s brand management sense and use of new media for his decision to launch Tesla into space.

Musk explained that he wanted to inspire the public about “the possibility of something new happening in space”, as part of his larger vision to spread humanity to other planets.

The Roadster was attached to the upper stage of the Falcon Heavy rocket. The car was mounted permanently on the rocket in an inclined position above the payload adapter.

Tubular structures were added to mount the front and side cameras. Located in the driver’s seat is “Starman,” a full-scale human mannequin dressed in a SpaceX pressure spacesuit.

It was placed on the steering wheel with the right hand and the left elbow rested on the open window sill. The mannequin was named after the David Bowie song “Starman”, and the car’s sound system was set prior to launch to continuously loop the Bowie song “Space Oddity”.

The glovebox contains a copy of Douglas Adams’ novel “The Hitchhiker’s Guide to the Galaxy”, as well as a reference to the book in the form of a towel and a sign on the dashboard that read – “Don’t panic!”.

A Hot Wheels miniature roadster has been fitted with a miniature starman on the dashboard. A plaque bearing the names of the employees working on the project is placed under the car, and on the vehicle’s circuit board a message read “Made on Earth by Humans”.

The car also carries a copy of Isaac Asimov’s Foundation Trilogy on 5D Optical Discs, a proof of concept for high-density long-lasting data storage donated to Musk by the Arch Mission Foundation.

The US Office of Commercial Space Transportation issued a launch license for the test flight on February 2, 2018. The rocket took off from Launch Complex 39A at Kennedy Space Center on February 6 at 15:45 EST (20:45 UTC).

The upper stage supporting the car was initially placed in Earth parking orbit. It spent six hours coasting through the Van Allen radiation belts, demonstrating a new capability requested by the US Air Force to directly insert heavy intelligence satellites into geostationary orbit.

Then, the upper stage gave a second boost to reach the desired escape trajectory. The launch was live-streamed, and video feeds from space showed the Roadster at various angles, with Earth in the background, thanks to cameras mounted inside and outside the car.

Musk estimated that the car’s battery would last over 12 hours, but the live stream lasted only four hours, thus ending before the final boost from Earth orbit.

The Roadster is in a heliocentric orbit that crosses the orbit of Mars and reaches a distance of 1.66 au from the Sun. With an inclination of about 1° at the ecliptic plane, compared to Mars’ 1.85° inclination, this trajectory by design would not intercept Mars, so the car would neither take off from Mars nor enter Mars orbit.

The car’s maximum speed relative to the Sun would be about 121,000 km/h (75,000 mph) at perihelion. It was the second object by SpaceX to leave Earth orbit, after the DSCOVR mission at the Earth-Sun L1 Lagrangian point.

Even if the rocket targeted an actual Mars transfer orbit, the car could not be placed in orbit around Mars, because the upper stage that it carried was not equipped with the necessary propellant, maneuver, and communications capabilities.

This flight only demonstrated that the Falcon Heavy is capable of launching significant payloads in potential future missions toward Mars.

The car in space quickly became the subject of internet memes. Western Australia Police distributed a photo of a radar gun aimed at the Roadster over Australia. An attempt was made by Donut Media to launch a Hot Wheels Tesla Model X into the stratosphere using a weather balloon.

Tokyo, a Russian start-up, sent a scale model of a Soviet-era Lada carrying an effigy of Roscosmos head Dmitry Rogozin to an altitude of 20 km to collect test data for the design of the ‘stratostats’.

The SpaceX launch live stream reached more than 2.3 million concurrent viewers on YouTube, making it the second most-watched live event on the platform, behind another space-related event: Felix Baumgartner’s leap from the stratosphere in 2012.

Simulations over 3 million years found the roadster to hit Earth at about 6%, or Venus at about 2.5%. These collision probabilities are similar to those of other near-Earth objects.

The half-age for the tested orbits was calculated as about 20 million years, but the trajectory varied significantly after the close approach of the Earth-Moon system in 2091. Musk originally estimated that the car could drift in space for a billion years.

According to chemist William Carroll, solar radiation, cosmic radiation, and micrometeoroid effects will structurally damage the car over time. Radiation will eventually break down any material with a ‘carbon-carbon bond’, including carbon fiber parts.

Tires, paint, plastics, and leather may only last a year, while carbon fiber parts will last much longer. In the end, only aluminum frames, inert metals, and glass that will not be broken by meteorites will remain.

In the end, we can say that “Starman” will continue to symbolize SpaceX’s imaginative approach to space launch.

Thanks for reading till the end. Comment what’s your opinion about this information “Why Elon Musk’s SpaceX Sent a Tesla Roadster to Space on a Falcon Heavy?”.