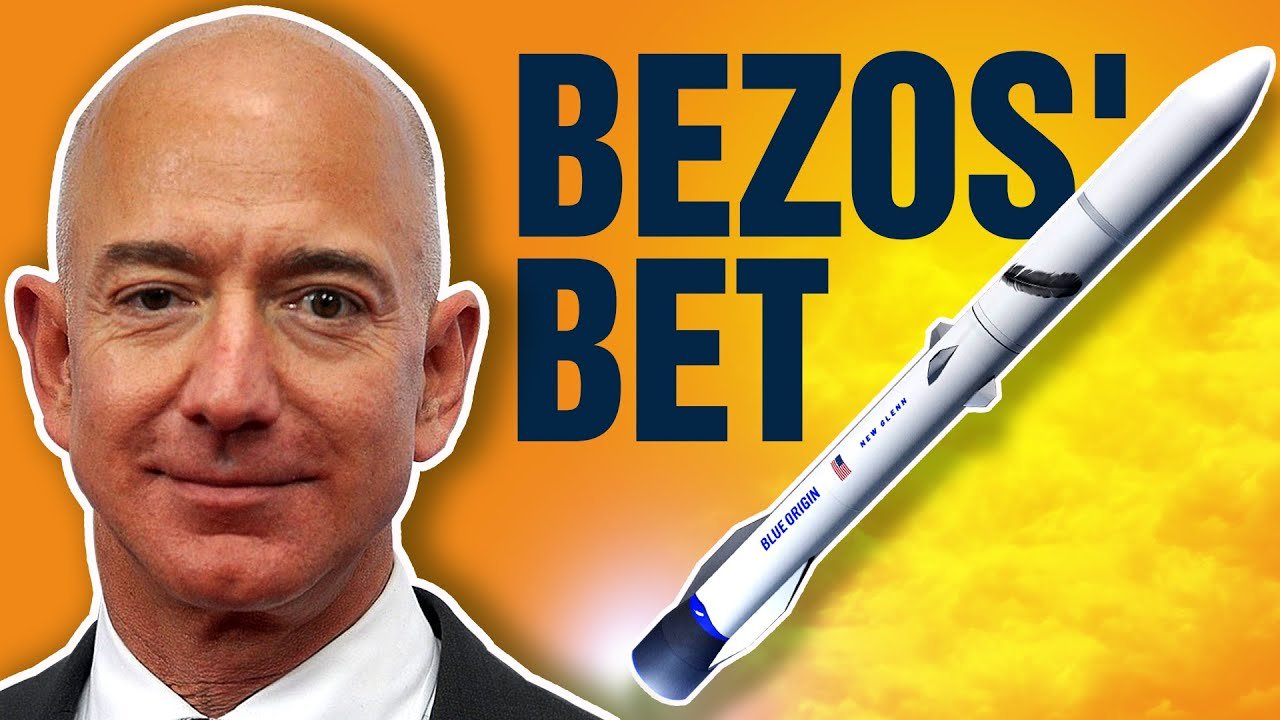 New Glenn: Bezos’ Dream Rocket to Orbital: Lawsuits aside, Jeff Bezos is planning to give spacex a run for their money and it’s evident as Jeff recently took off into space in his New Shepherd rocket. However, his eyes are set on even something bigger. Orbital flights with his New Glenn rocket. But, What is the new New Glenn rocket? Well, you will find out in just a second.

On Jeff Bezos’ short trip to space, he was accompanied by Mark Bezos, his brother, Wally Funk, an 82-year-old pioneer of the space race, and an 18-year-old student. He traveled in a capsule with the largest windows that flew into space, offering stunning views of Earth.

When the capsule touched down back after a 10-minute, 10-second flight, Jeff Bezos exclaimed: “Best day ever!“. Built by Bezos’ company Blue Origin, the New Shepard is designed to serve a growing market for space tourism and is positioned as a close competitor to the SpaceX Falcon spacecraft to gain an edge in NASA support contracts for development Is.

In this flight, the oldest person to go into space – Ms. Funk – and the youngest student was Oliver Damon. The spacecraft took off from a private launch site near Van Horn, Texas. At the news briefing after the launch, Jeff Bezos said: “My expectations were very high and they were dramatically exceeded.”

Two minutes into the flight, the capsule detached from its rocket and continued upward towards the Karman Line – the most widely recognized boundary of space, which is 100 km above.

Jeff Bezos recently resigned as chief executive of Amazon, to focus on his other ventures, including Blue Origin, which he founded. So, you can understand how serious he is about his dreams of building a highly capable spacecraft.

However, there are some issues with his next spacecraft project in line for completion, New Glenn. In the fall of 2017, shortly after becoming CEO of Blue Origin, Bob Smith received an extensive briefing on the state of the New Glenn rocket program.

He was told that the estimated launch date for the massively reusable rocket was 2020. As Smith assessed progress on New Glenn to date and drew on his long experience at Honeywell Aerospace, he soon came to the conclusion that this launch date was inappropriate.

“This is not a 2020 launch event,” he said at the meeting. “It’s a 2022 program, at best.” Jeff Bezos was not present for this, but his response later was that he would absolutely not accept any modifications to the launch date of the larger Orbital rocket.

Not only did New Glenn not launch in 2020, last week Blue Origin said it wouldn’t launch until the fourth quarter of 2022 at the earliest. As part of its announcement, Blue Origin also didn’t take much blame for the rocket’s delay.

Instead, the company attributed the delay mostly to a potential customer, the US Department of Defense. Blue Origin’s New Glenn project is incredibly ambitious. If successfully developed, it would provide a revolutionary heavy-duty service for low Earth orbit, geostationary space, and even the Moon.

So what exactly has gone wrong? As part of his overall space strategy, Bezos has long been thinking about building a large, reusable orbital rocket. The first step was to learn how to reuse rockets with the smaller New Shepard launch system, which consists of a single-engine booster and capsule.

And over the past five years with company engineers, New Shepard has successfully completed more than a dozen suborbital missions with picture-perfect rocket landings. But long before New Shepard made his maiden flight, Bezos was already deep into planning his next rocket.

Instead of being powered by seven BE-4 engines and being as tall as NASA’s Saturn V rocket, Bezos originally envisioned a more modest-sized rocket than the Falcon 9 or United Launch Alliance’s Delta IV. In some iterations, the New Glenn had only three main engines.

This launch represents a more incremental step for a company that has yet to put a gram of material into orbit. But instead of offering a route between the New Shepard and a giant orbital rocket, Bezos ultimately opted to jump straight to the massive, 313-foot-long version.

Bezos told his engineering team to start running toward the launch pad. The engineering challenges of building such a large rocket are enormous. But since the New Glen is so expensive to build, the company needed to recover it from the start.

SpaceX enjoyed a learning curve with the Falcon 9, only to successfully recover the first stage on the rocket’s 20th launch. Blue Origin engineers will be expected to return New Glenn safely on its first mission. Thus the demands placed on Blue Origin’s engineers were clearly too heavy.

Blue Origin is now working on several other major projects in addition to New Glenn. There is an ongoing effort to place humans on sub-orbital New Shepard flights, which could take place in late spring or early summer.

It’s been a long slog, as Bezos once suggested that humans could fly on the Suborbital Launch System as early as 2017. Work is in progress on the BE-4 engine itself, which would eventually power the New Glenn.

As part of its development process, Blue Origin engineers corrected a number of technical problems with the engine’s turbopump system. Technicians and engineers are working hard to deliver the flight-ready BE-4 rocket engine to United Launch Alliance, a key customer, by this summer.

This is probably Blue Origin’s most immediate priority. Blue Origin is also leading a “national team” that includes industry veterans such as Lockheed Martin and Northrop Grumman, which seeks to build a lander for manned missions to the Moon.

It’s a heated, high-profile competition with a team led by two other bidders, SpaceX and Dynetics, and has a huge reputation for billions of dollars in prize contracts and getting astronauts to the surface of the Moon.

NASA expects to choose one or two finalists in April to go ahead. Bezos desperately wants to win here and get the contract, turning down SpaceX. Obviously, for now, New Glenn has taken a back seat.

Vehicle delays into the fourth quarter of 2022 and let’s be honest, means that at least 2023 comes down to a combination of two things. First, there’s the enormity of the engineering challenge, which is what led to Bezos’ decision to opt for the larger New Glenn design.

The rocket will be larger than any other vehicle currently flying, and the company says it has invested $2.5 billion in New Glenn’s development. New Glenn is approximately 320 feet long and is designed to lift approximately 45,000 kilograms of payload into low Earth orbit.

Blue Origin has built a mockup of New Glenn’s booster stage for a test run ahead of its first launch from Florida and has invested heavily in manufacturing and testing facilities in Cape Canaveral with nearly 1 million square feet of real estate.

The company noted that, of the $2.5 billion invested in New Glenn, approximately $1 billion was spent rebuilding the LC-36 launchpad. Blue Origin’s work on the LC-36 includes building a tower that can assist launches on New Glenn, which the company hopes to do later.

Bezos personally funded Blue Origin’s growth by selling part of his Amazon stock. While he has said he sells about $1 billion worth of Amazon shares annually to fund the space company, Bezos has recently increased Amazon stock sales, cashing in more than $10 billion in 2020.

Bezos’ vision is compelling. Without a doubt, we can say that if New Glenn is completed, it will be a formidable competitor to SpaceX. If there is one-on-one competition and Bezos’ efforts are fueled by that, rapid advances in aerospace technology will emerge.

so what do you think? Do you think New Glenn will be able to compete or will Jeff Bezos experience another failure this late in his successful life of entrepreneurship?

Thanks for reading till the end. Comment what’s your opinion about this information “New Glenn: Bezos’ Dream Rocket to Orbital”.