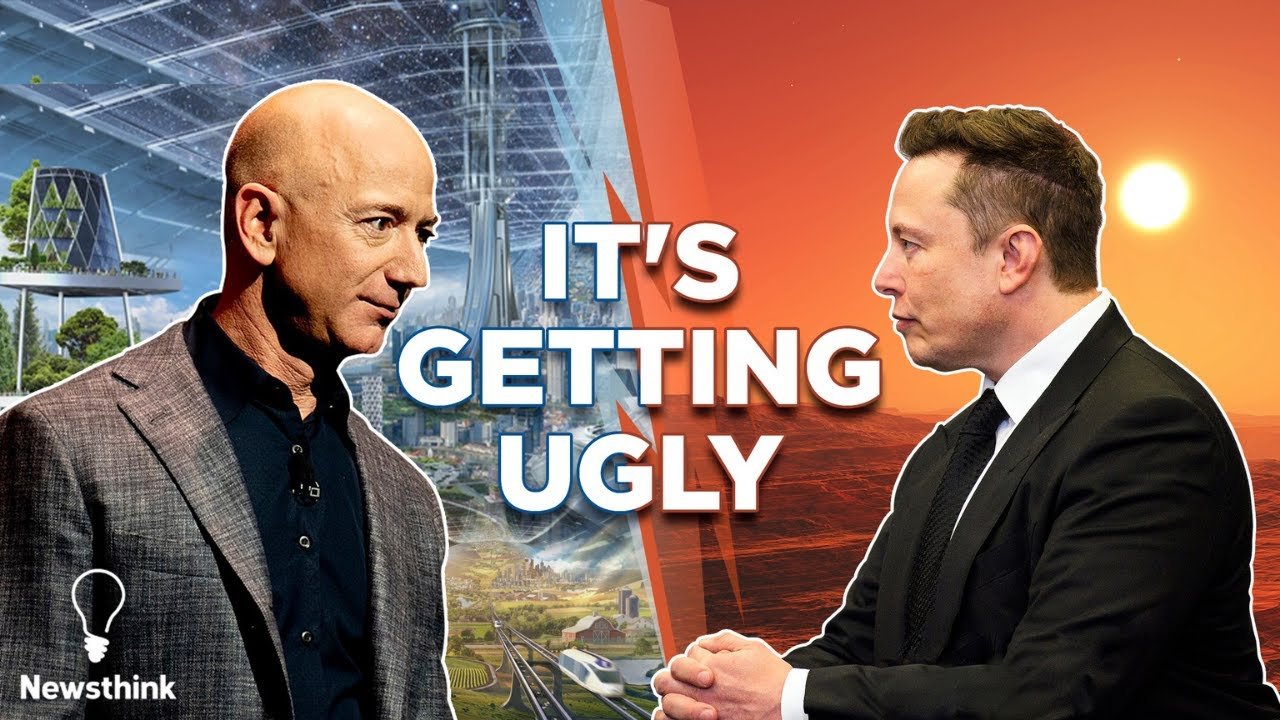 Elon Musk vs. Jeff Bezos: It’s Getting Ugly: The two richest men in the world have a long history of squabbling over their ambitions in space. To understand the rivalry we have to go back to 2004. When Musk and Bezos met for a dinner.

According to Christian Davenport’s book, the Space Barons, Musk tried to give some tips to the Amazon CEO about building rockets, saying: “I actually did my best to give good advice, which he largely ignored.”

Their space companies were just start-ups at the time. Bezos – who has always been infatuated with space – had the means to start Blue Origin in 2000 as he was flush with cash from Amazon. Bezos is so keen, he recently stepped down as CEO of Amazon to focus more attention on Blue Origin.

Musk started SpaceX two years later with the money he made when his company was sold to PayPal which was then bought by eBay. They spent the first decade building up their ventures without a lot of bickering. But that all changed in 2013.

When SpaceX secured a long-term lease of launchpad 39A at NASA’s Kennedy Space Center in Florida where the Apollo moon missions took off from. Bezos wasn’t very happy about the deal.

Blue Origin filed a formal protest with NASA to prevent SpaceX from using it exclusively, arguing it should be turned into a “commercial spaceport available to all launch companies.”

In reaction, Musk called the protest a “phony blocking tactic” in an email to SpaceNews and said SpaceX would accommodate Blue Origin should their vehicle be launch-ready. But he couldn’t resist taking a swipe at Blue Origin’s progress, writing “Frankly, I think we are more likely to discover unicorns dancing in the flame duct.”

SpaceX secured a 20-year lease of the historic launch pad. The next year, it was SpaceX that had beef with Blue Origin. In 2014, the U.S. Patent and Trademark Office granted Blue Origin a patent for landing rocket boosters on drone ships.

This would have meant that SpaceX would have to pay to use the technology. SpaceX argued that the concept of drone ships had been around for decades. A judge sided with Musk’s firm, forcing Blue Origin to withdraw most of its patent claims.

Since then, SpaceX has successfully landed its Falcon 9 boosters on drone ships 66 times to date – the first time was in April 2016 on the ship “Of course I still love you”.

He told Ashlee Vance who wrote a biography about him that Blue Origin’s tactic has been to snag talent away from SpaceX by offering “double their salaries.” Adding, “I think it’s unnecessary and a bit rude.”

While SpaceX has sprinted ahead, Blue Origin has progressed at a far slower pace. It successfully landed New Shepard for the first time in 2015 – after which Bezos tweeted it was “the rarest of beasts – a used rocket.” To which Musk pointed out it wasn’t exactly rare.

SpaceX did the same with its prototype Grasshopper three years before, in 2012. And Blue Origin still has not gone into orbit. It carried passengers for the first time on a sub-orbital flight in July.

Bezos and three crewmates flew past the Karman line, the internationally-recognized boundary of space, before returning to Earth. On the other hand, SpaceX has gone into orbit with the Falcon 9 over 100 times, including taking astronauts to the International Space Station.

Both billionaires have their sights set on sending people much farther. When SpaceX beat out Blue Origin to win a coveted contract with NASA to land the next humans on the moon using this modified Starship, Musk joked Bezos ‘can’t get it up’…to orbit!

And speaking of sexual innuendos: Musk also poked fun at the name of Blue Origin’s lunar lander, Blue Moon, tweeting: “Putting the word ‘Blue’ on a ball is questionable branding”. Blue Origin is suing NASA for awarding SpaceX that contract worth $2.9 billion.

The government agency originally planned on investing in two lunar landers going forward. The choices were SpaceX, Blue Origin, and Dynetics. However, budget concerns and a lack of funding from Congress scuttled those plans – forcing NASA to choose just one.

Blue Origin feels it’s dangerous choosing only one company, writing in an open letter on its website: “Competition will prevent any single source from having insurmountable leverage over NASA.” And created this infographic blasting SpaceX’s Starship.

The contract is only for an uncrewed test flight and the first crewed landing on the moon. Blue Origin and others can still bid on further contracts. However, Blue Origin argues that SpaceX now has a huge head start.

And after this loss, it lost a lead engineer who had been working on the lunar lander. Nitin Arora announced in a LinkedIn post he was moving over to SpaceX. Bezos’ other company Amazon also has a problem with SpaceX’s satellite internet service, Starlink.

Over a thousand Starlink satellites have already been launched, serving 90,000 customers worldwide according to SpaceX. The company aims to launch many thousands more.

However, Amazon has urged the Federal Communications Commission, the FCC, to reject SpaceX’s updated plans that call for two different satellite configurations, arguing SpaceX should have made these changes “…before filing its application – not after.”

Why does Amazon care? Because it plans to launch its own satellite internet service dubbed Project Kuiper – which led Musk to call Bezos a “copycat”. There’s no word on when Amazon’s service will start operating.

SpaceX responded to Amazon’s protest by calling it “…a continuation of efforts by the Amazon family of companies to hinder competitors to compensate for Amazon’s failure to make progress of its own” and also noted that Amazon has “lodged objections to SpaceX on average about every 16 days this year.”

Musk then tweeted: “Filing legal actions against SpaceX is *actually* (Bezos’) full-time job.” SpaceX is banking that its high-speed internet service will bring in billions of much-needed dollars to fund the colonization of Mars. Settling on Mars is not an idea Bezos likes at all.

He’s made veiled comments about Musk’s plans, once saying that Mount Everest would be a “garden paradise” compared to living on the freezing red planet. He also took a shot at one of the reasons Musk wants to reside on Mars.

In case Earth was to get destroyed. Bezos called this kind of backup plan “very unmotivating” without naming the SpaceX CEO. On the other hand, Bezos envisions a universe populated by floating space colonies that hold a million people, some of which can resemble our own cities in order to take the pressure off of Earth’s resources.

But Blue Origin doesn’t have a timeline to turn his vision into reality, nor has it discussed how big of a role it would play in trying to make this happen. Whereas SpaceX is operating with concrete goals in mind. Musk has said he’s aiming to send people to the red planet for the first time by 2026 on Starship.

It all depends on the rate of progress of the gigantic launch vehicle which is under development in south Texas. SpaceX conducted its first test flight of the Starship in December 2020, a huge achievement that even Bezos acknowledged, posting on Instagram: “Anybody who knows how hard this stuff is impressed by today’s Starship test.

Big congrats to the whole @SpaceX team. I’m confident they’ll be back at it soon.” Blue Origin is now working on its own answer to Starship. New Glenn was originally designed to have a reusable first stage but not a reusable upper stage.

However, the company is reportedly working on making the second stage reusable as well to compete with Starship which is a fully reusable rocket. The secretive Blue Origin project has been code-named “Jarvis”.

When someone on Twitter suggested that Blue Origin is acting like a kid copying someone’s homework, Musk replied with laughing emojis. New Glenn was supposed to go on its maiden voyage in late 2021. That has now been pushed to late 2022.

Blue Origin’s motto is gradatim ferociter which in Latin means “step by step, ferociously”. But at its pace so far, Musk jokingly dismissed the idea that Blue Origin was a true competitor in an interview with the BBC a few years ago.

Thanks for reading till the end. Comment what’s your opinion about this information “Elon Musk vs. Jeff Bezos: It’s Getting Ugly”.

1 thought on “Elon Musk vs. Jeff Bezos: It’s Getting Ugly”