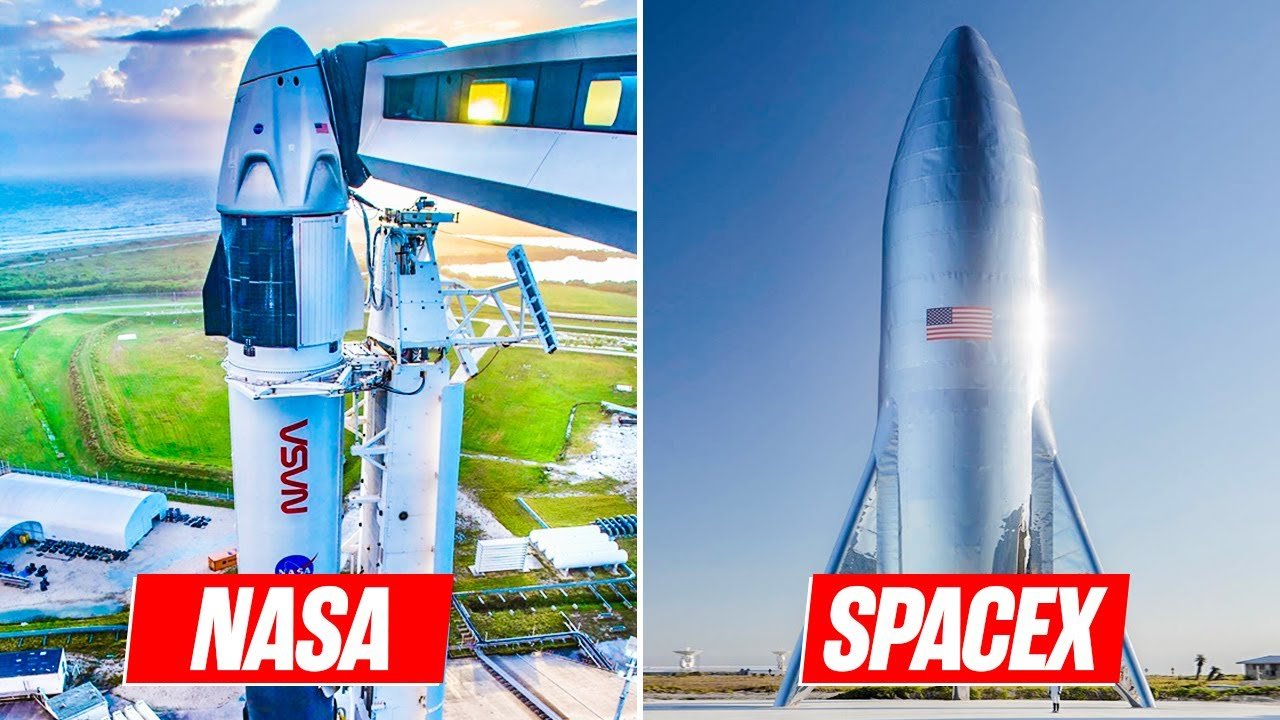 Why Spacex And Nasa Both Are Needed?: In today’s age of private aerospace corporations dominating the industry, it’s easy to pin all our hopes on them. SpaceX has already achieved what NASA could not for 50 years since the Apollo missions.

This begs the question, why is NASA still around? If you’ve ever asked the same question, then you need to read this article to the end. Well, we will find out in just a second.

Previously, government organizations collaborated with major aerospace companies to launch objects into space. But not any longer. Over the last two decades, startup space firms have demonstrated their ability to compete with, and in some cases outperform, bigger rivals.

There is no greater illustration of this than SpaceX, a Hawthorne, California-based firm that lands space rockets to create sights right out of a science fiction movie. SpaceX became the first commercial business to take astronauts into space in 2020, and they are presently developing a massive new rocket system that might one-day transport people to Mars.

When you see these remarkable accomplishments, you might ask if NASA is still necessary, or if NASA and SpaceX are competing. Isn’t it? Well, in fact, the two companies are quite distinct and rely on one another to succeed. How?

At first, let’s isolate the two and set in stone their differences. SpaceX is a private business led by Elon Musk that presently develops and launches two rockets: the Falcon 9 and Falcon Heavy. These rockets’ booster stages often return to Earth for refurbishment, saving money and allowing SpaceX to undercut competitors’ costs.

SpaceX also manufactures and operates the Dragon space spacecraft, which can transport people and cargo to the International Space Station. Eventually, the firm intends to carry private astronauts aboard Dragon.

They’re working on the Starship to follow up to Dragon. A Starship may one-day transport humanity to Mars for permanent settlement. In addition, the firm is launching Starlink, a large constellation of tiny satellites designed to give worldwide high-speed internet access.

The satellites, which now number approximately a thousand, have caused controversy due to worries that they may produce light pollution and interfere with astronomical studies.

And what about NASA? NASA on the other hand is a U.S. government organization financed by taxpayers with more than a dozen offices around the country.

It reports to the executive branch, and its administrator is appointed by the president. NASA’s activities are authorized by Congress through legislation, and the agency’s yearly budget is provided by Congress.

NASA’s budget is determined by a political process, and it is not dispersed equitably because human spaceflight projects use over half of their funding.

The International Space Station, a permanently crewed, multinational space laboratory in low-Earth orbit, is the most visible of these initiatives to the general public. Their Artemis program is also trying to send people to the Moon and Mars.

NASA’s scientific division, which encompasses planetary science, Earth science, astrophysics, and heliophysics, receives around one-third of its budget. NASA sends spacecraft to explore planets and other worlds, study Earth’s environment, solve basic questions about the nature of the cosmos, and study the Sun.

Now, from all the news and speculation about SpaceX’s advances, we may think that they are competing. They aren’t. SpaceX is a for-profit corporation, whereas NASA is a taxpayer-funded organization that is free to explore scientific discoveries that are not directly related to commercial benefits.

So where exactly does the idea of competition between both entities stem from? Well, perceptions of SpaceX and NASA competing generally revolve around NASA’s Artemis program.

President George W. Bush revealed a plan in 2004 to retire the Space Shuttles and return humans to the Moon’s surface. This resulted in the development of the Orion crew capsule and a rocket that developed into the Space Launch System, or SLS.

Lockheed Martin and Boeing build Orion and SLS, respectively, with their own private vendors and subcontractors. The vehicles are built in NASA facilities under NASA supervision, and NASA owns the finished product.

Because the initiatives create tens of thousands of well-paying jobs in the communities where they are created, they have significant political backing from their local Congressional members. Both the SLS and Orion are behind time and over budget.

Meanwhile, SpaceX has evolved from a tiny startup to a serious rival to conventional aerospace firms. Despite the fact that SpaceX routinely misses deadlines, its advocates say that SLS and Orion are excessively costly and rely on antiquated technology that is outmatched by vehicles like Starship.

SLS and Orion supporters argue that the vehicles ensure the United States will be able to launch big payloads and passengers into space.

An example is aircraft carriers, which the United States continues to construct and own despite the fact that private businesses can build comparable-sized cruise ships.

NASA’s stated stance is that SLS and Orion are the best spacecraft for returning people to the Moon right now. Furthermore, the agency will be unable to reverse direction without the necessary political support.

Meanwhile, SpaceX has no one but Elon Musk to answer to and may proceed with Starship development to meet Musk’s ambition of transporting humans to Mars. Because of their differences, NASA has been paying SpaceX to carry out part of its work. How did that come to be?

To learn that, we must travel nearly 20 years back to a horrible accident. The space shuttle Columbia disintegrated when it re-entered the Earth’s atmosphere on February 1, 2003.

The accident claimed the lives of all seven astronauts aboard. The loss of the space shuttle Columbia and its crew triggered a major shift in direction for America’s human spaceflight program.

President George W. Bush declared on January 14, 2004, that the space shuttle will be decommissioned following the completion of the International Space Station (ISS). America would replace it with a new vehicle capable of returning people to the Moon.

The following year, then-NASA Administrator Mike Griffin said that the ISS’s completion will, for the first time, offer up commercial options for the routine delivery of cargo and people to low-Earth orbit.

Griffin reasoned that this was necessary in order to free up enough cash for a Moon return. To manage the project, NASA created the Commercial Crew & Cargo Program Office (C3PO).

SpaceX was just a few years old at the time. Musk has ambitious goals such as lowering the cost of spaceflight by reusing space gear and establishing people on Mars, goals he got closer to with Falcon, Dragon, and Starship.

SpaceX was shortlisted for evaluation under the NASA cargo program in 2006. But by 2008, SpaceX and Tesla, the electric car manufacturer in which Musk had invested, were running low on cash.

Musk was faced with an impossible choice: “I could either split the funds that I had between the two companies or focus it on one company – with certain death for the other,” he told Business Insider in 2013.

Fortunately, on 23 December 2008, NASA awarded SpaceX with a $1.6bn contract to ferry cargo and supplies to the ISS. The Dragon 1 capsule could transport freight and supplies but not passengers. Nonetheless, it was a watershed moment for the firm.

Barack Obama was elected president in November 2008. His government initiated a study of human spaceflight, which resulted in the abandonment of his predecessor’s plan to return to the Moon.

The Obama administration, on the other hand, supported the ongoing commercialization of space by supporting the development of private crew spacecraft.

But it would take time, and once the space shuttle was decommissioned, NASA was forced to fill the void by paying Russia tens of millions of dollars per seat to send its personnel to the ISS on the Soyuz spacecraft, which launches from Baikonur in Kazakhstan.

Congress was originally skeptical of the Commercial Crew Program and did not offer adequate funding. But Charles Bolden, the former astronaut who succeeded Griffin as NASA Administrator under Obama, persisted and was finally rewarded.

From their initial $50m investment in the program in 2010, the space agency whittled several competing companies down to two, SpaceX and Boeing in 2014. Since then, they have been refining and testing their spacecraft designs.

In March 2019, SpaceX performed a triumphant launch of the Crew Dragon without astronauts. Using automated procedures, the capsule successfully approached and docked with the space station.

A successful in-flight test of the Crew Dragon’s launch abort system in January 2020 helped clear the way for the historic first lift-off with astronauts from Florida’s Kennedy Space Center on 30 May.

In our estimates, both SpaceX and NASA are important tools for the US government to further its goals in space and as a byproduct, bring humanity closer to the stars.

But what do you think? Do you think NASA should give away to a whole array of private aerospace companies doing what SpaceX does? Or do you agree with us completely?

Thanks for reading till the end. Comment what’s your opinion about this information “Why Spacex And Nasa Both Are Needed?”.

2 thoughts on “Why Spacex And Nasa Both Are Needed?”