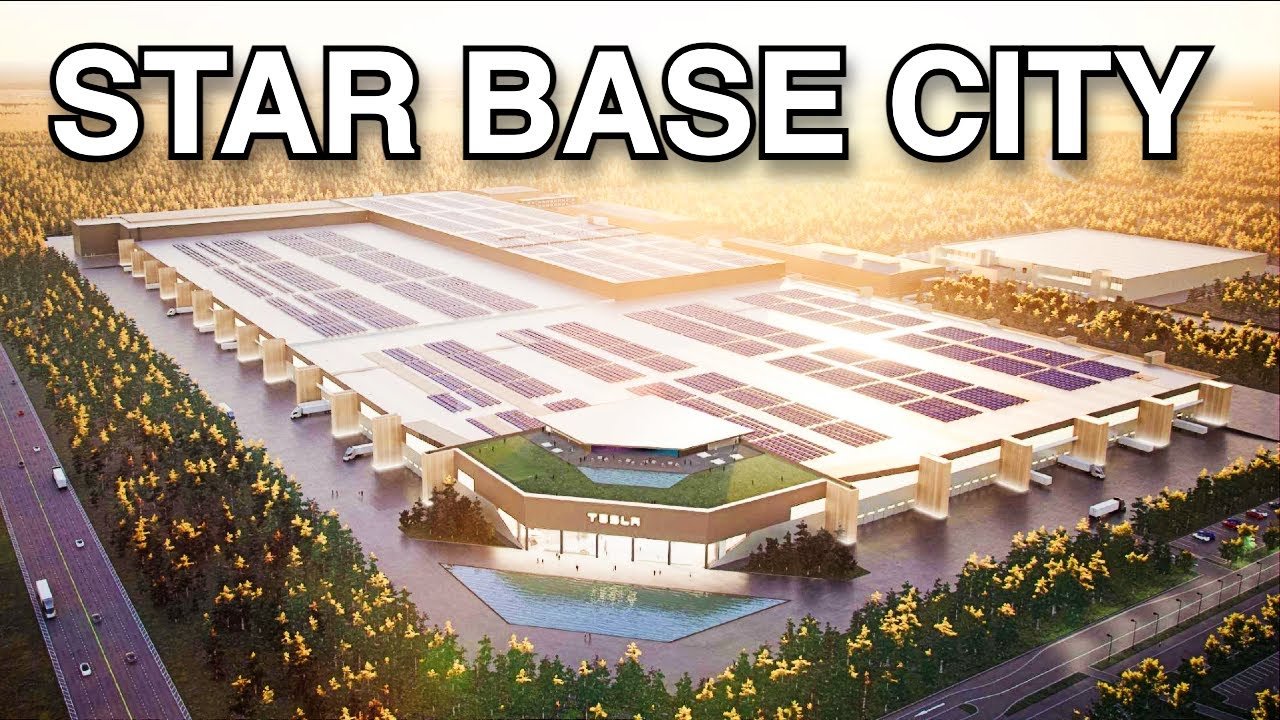 Take A Look Inside SpaceX’s Launch Site: The Starbase: Elon Musk’s dream of making life multi-planetary becomes ever more real with each passing day. Central to his vision is SpaceX’s first working spaceport, currently taking shape at breakneck speed out in the boondocks of South Texas.

So what’s onsite already, what are those giant chopsticks everybody’s going on about, and what can we expect to see springing up next? Join us for a historic peek inside SpaceX’s launch site: The Starbase.

First things first, it’s worth asking why Musk chose Texas for his Starbase in the first place. After all, SpaceX’s operation remains headquartered in California, where many of the brightest minds in engineering and tech are based.

Florida would be another obvious choice, with its rich spacefaring pedigree. Musk’s new Boca Chica site in south Texas, just by the border with Mexico, is superior for several reasons.

For one, it’s close to the equator, so rockets can take advantage of the earth’s natural spin to help accelerate away from the earth’s gravity. Texas, usefully for Musk, is also seen as a soft touch in terms of regulatory oversight.

Meaning he can move quicker than in a more litigious, regulation-inclined state like California. Florida’s Kennedy Space Centre and Cape Canaveral Space Force Stations certainly have a past for yeeting hardware in origin.

But they’re secure federal facilities that necessitate a great deal of red tape for private companies. Put simply, in Texas, Musk has a much freer reign. Texas authorities even went above and beyond to woo SpaceX to the state, loosening tiresome existing legislation around noise limits, and permitting temporary closures of state beaches to facilitate SpaceX’s ambitious testing schedule.

The ground was broken at Boca Chica in September 2014. So where are we at now, seven years later? The launch site – which is entirely distinct from the Starship manufacturing facility a few miles up the road – currently looks like a construction site.

And all those vast cranes are all, for now at least, on hire from run-of-the-mill construction firms, each to the tune of several thousand dollars a day. When Musk needs a bigger crane, he just gets on the phone and hires one.

When a crane outlives its usefulness, back to the hiring company it goes. It’s quicker that way, and speed is always Musk’s overriding concern. The Boca Chica launch complex can be roughly divided into two distinct zones.

The suborbital launch site, on the western end of the complex, is where all the starship prototypes have, to date, been put through their paces. Some more explosively than others. These twin suborbital launch pads – Pad A and Pad B – are served by a modest tank farm.

Having served SpaceX well up to now, this half is already being overshadowed, quite literally, by the far more impressive Stage Zero. In a tweet back in July, Elon Musk declared “Stage Zero… is everything needed to launch & catch the rocket.

It’s at least as hard as the booster or ship”. And it’s an extraordinarily complex piece of kit. Not least the skyline-dominating 400-foot tall orbital launch integration tower, or OLIT. SpaceX’s design philosophy can be summed us as ‘build, fly, fail, redesign, fly.’

When the firm gets something wrong on a rocket, they change it and build another one. That’s not really an option with something the scale of this tower. Which, aside from its great height, also incorporates a couple of nifty mechanical devices that have led its creators to dub it ‘Mechazilla’.

First, take the QD, or ‘quick disconnect’ arm. The retractable QD is designed to pump propellant – liquid methane and liquid oxygen – into the super-heavy booster rocket, as well as steadying the craft, potentially, when docking.

More on that shortly. The QD – which is attached to the fifth launch tower segment – has nothing on the so-called chopstick arms that are, at the time of writing, still being assembled on the ground nearby.

Musk’s vision of making mankind multi-planetary hinges on being able to reuse rockets quickly, in much the same way that modern jet airliners are able to fly multiple journeys in a single day. To do this, the biggest flying object ever – the fully stacked Starship – needs a reliable, accurate landing routine.

To this end, a pair of giant arms – described as chopsticks – will be installed on the top of the gigantic launch tower. These will, the thinking goes, catch the descending booster and ship from mid-air, using pins attached to the rocket body, or snagging onto the ship’s reinforced grid fins.

After being snagged by those chopstick arms, the spacecraft can be transported back and forth along them using tank treads. This means the craft can be set down more accurately on a booster, or the launch table.

The launch table itself rests on six gargantuan steel supports, buried deep in the Texas soil. It weighs 370 tonnes and took a year to install. It’ll need to be tough, as the fully laden stack, when complete, will weigh 5,000 tonnes.

This table also incorporates a deluge system, which uses running water to suppress noise. The water for that deluge system is supplied by a nearby tank farm, which has been gradually taking shape over the past few months.

This GSE – means ‘ground support equipment’ – orbital tank farm is the largest of its kind anywhere on earth. It comprises six giant containers up to 30 meters in height that may look a little familiar to longtime SpaceX watchers.

That’s because they’re made using the same 4mm thick steel cylinders used to make the rockets themselves. Musk’s attitude, as so often, is ‘how can we do it cheaply?’ And using existing parts needn’t require expensive new designs of tooling regimes.

You might be thinking if you’re clever and know about these things, that Musk’s rocket propellant can’t be held in 4mm thick steel tanks. And you’d be right.

The cryogenic rocket fuel – stored in seven of the eight tanks, while the other holds water for that deluge system we mentioned – would warm up unacceptably. So engineers put a sleeve – also known as a ‘cryo shell’ – around the tanks, sealing the void between tank and shell with an insulating gas.

Voila, the tanks can now hold liquid oxygen, or liquid methane, for days or even weeks at a time. In case you’re thinking from the pictures that the fuel store looks dangerously close to the launchpad, you needn’t. The tanks only hold enough fuel for one stack.

So by the time the rocket is blasting off, the tank farm will be empty. This is the theory anyway. Incidentally, engineers originally hoped fuel could be piped into the booster using pipes that ran underground, but the QD arm solution was favored as it reduced the amount of hardware – and therefore mass – needed on the rocket itself.

Not everybody is delighted with Musk’s progress. The Federal Aviation Authority has suggested it could force SpaceX to take the launch tower down as it’s not clear if it satisfies planning regulations.

Embarrassingly, the FAA is said to have only become aware of the tower after seeing a video of it online. SpaceX recently faced a legal challenge from the Dallas Petroleum Group, which had previously owned some of the land currently occupied by Starbase.

The group hoped its claim on some inactive wells at Boca Chica would enable it to put a spanner in Musk’s works, but the all-powerful Railroad Commission of Texas decided Musk’s plans, to actually build natural-gas-fired power plants and extract liquid methane from the ground, were more legit and worthy of permission.

Going forwards, the suborbital section of the launch site would appear to be used to pre-flight test firings of the orbital rockets – like SN20 – before they’re stacked on the tower. What does the future hold for the Boca Chica starbase?

Plans suggest a second orbital launch pad and tower, an additional landing pad, and two dedicated structural test stands will join the current complement of buildings at the launch site.

The little craft that started it all around here, Starhopper, will be situated at the entrance to the facility. Although Texas is, as we said, light touch when it comes to regulations, the necessity of allowing beach access on weekends will sooner or later create operational headaches.

Musk is trying to make it work – to the extent, his Boring Company has met with county officials to discuss the possibility of creating a tunnel. But this is very much pie in the sky for now.

Musk’s near-term vision is to incorporate the region as a city, named Starbase. As he rather grandly tweeted early this year: “Creating the city of Starbase, Texas,” “From thence to Mars, And hence the Stars.”

That’ll require the company to jump through plenty of hoops, but if anybody can do it, it’s Musk. Who knows what developments will take place in this briny corner of the US over the coming years.

As the man of the hour himself said of his mad chopsticks scheme: ‘Success isn’t guaranteed. But excitement is!’ What do you think? Are Elon’s chopsticks the future of space travel, or is he out to lunch? Let us know in the comments.

Thanks for reading till the end. Comment what’s your opinion about this information “Take A Look Inside SpaceX’s Launch Site: The Starbase”.

6 thoughts on “Take A Look Inside SpaceX’s Launch Site: The Starbase”