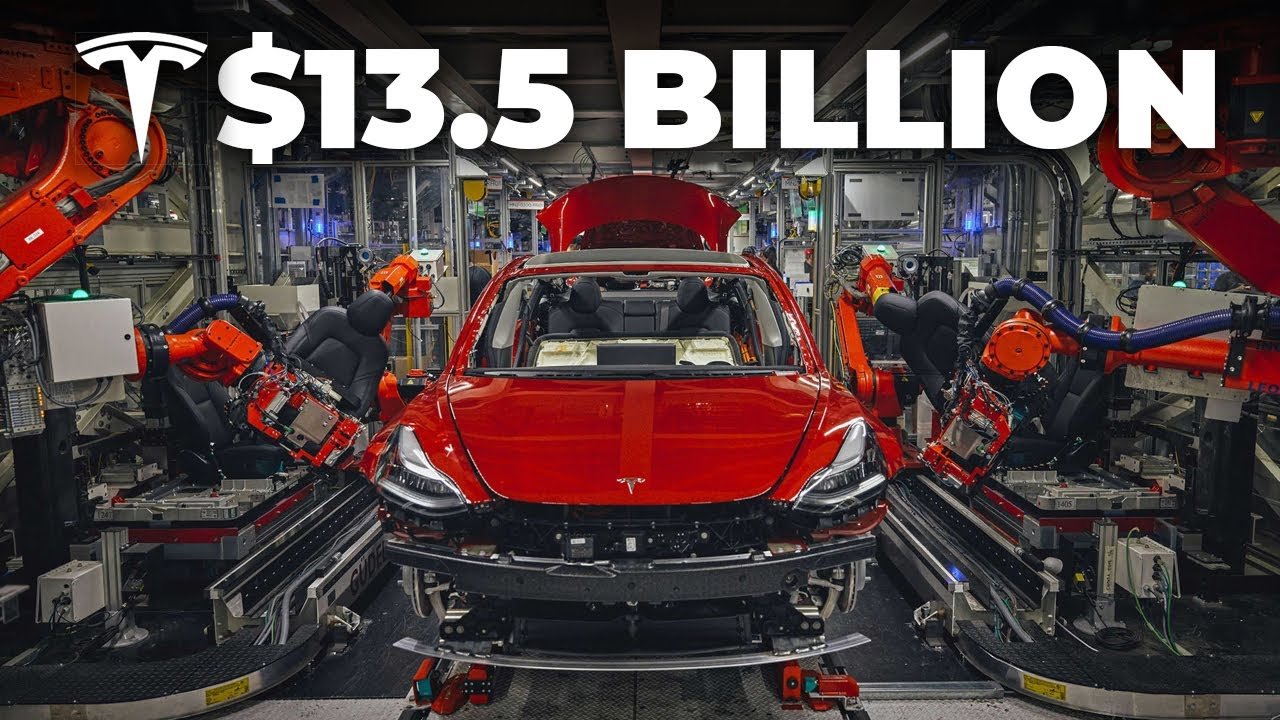 Elon Musk MASSIVE NEW $13.5 Billion Tesla Gigafactories: Tesla’s investors had a great time in 2021. The company joined the ranks of heavy hitters like Microsoft, Alphabet (Google’s parent company), and Facebook as companies that have traded with a market capitalization of $1 Trillion.

Tesla’s stock continues to rise, and we can say the EV manufacturer has done well for itself. Tesla currently manufactures four electric cars in its various factories around the world. With the Cybertruck, the semi-truck, the 2nd generation Roadster, and the $25,000 Model 2 on the way, there is still a lot of manufacturing for the electric manufacturer to do.

Gigafactory 1 is located in Sparks, Nevada, just after Reno. It is the first of Tesla’s growing number of factories. Giga Nevada sits on a massive area that spans 1.9 million square feet. It is 71 feet tall and has an operational area of 5.3 million square feet.

The funny thing about Giga Nevada is that despite these large numbers and functional space, it is only 30 percent complete. The Gigafactory produces electric motors and lithium-ion battery packs for the Model 3 sedan. It also manufactures Tesla’s energy storage products, the Powerwall and Powerpack, which it inherited from Tesla’s factory in Fremont, California.

At its full potential, Giga Nevada will have the largest footprint in the entire world and would be the only self-sustaining energy plant. Because Giga Nevada produces batteries, it was created in partnership with Panasonic, with several of its machines and products being owned by Panasonic.

All the battery packs for all Tesla Vehicles, except for vehicles produced in Giga Shanghai, are made by Panasonic. Giga Nevada employs more than 10,000 workers. The factory is aligned with the true north so that its equipment can be tracked on GPS, and the solar panels on its roof can be accurately aligned.

Tesla believes that production is more important than the product. It employs more engineers to create more machines instead of focusing on its products. It might seem like a good tactic, but the drawback is too much wastage.

A report in 2019 showed that half a million battery cells were scrapped per day because of production defects caused by carelessness or the overall pressure to increase production. In Giga Nevada, the main products are batteries.

These lithium-ion cells, also called 2170 cells, are assembled and packed using a combination of humans and robots. But the motors for Tesla cars and the gearboxes are manufactured with 90 percent automation.

The minimal involvement of humans in Giga Nevada shows that NASA only utilizes human resources for innovation and saves money by using automated robots. Giga Nevada aims to shift its operation entirely to solar power and become a self-sustainable plant.

A rough estimate shows that the economic impact of Giga Nevada comes to about $5 billion annually. This is without considering the $2.4 billion spent on building the Gigafactory.

Unlike all the other factories on this list, Giga New York, located in Buffalo, is focused on solar energy, not electric vehicles. Construction of the Giga New York started in 2014. The State of New York formerly owned it before it was leased to SolarCity.

By acquiring SolarCity in 2016, Tesla secured the factory. Tesla and Elon Musk have said this quite a lot of times. “Green energy is the future, and Tesla wants to move away from using depleted sources like water, petroleum, and coal for energy, to using nature’s biggest energy source, the sun.”

By acquiring SolarCity, Musk has revolutionized the solar panel industry by making cheap, cost-effective, and commercially practical photovoltaic cells. Musk wanted these cells to be introduced to the domestic circuit as well, and he has been successful at his ventures.

Production at the Giga New York began in conjunction with Panasonic, but SolarCity began producing photovoltaic cells and commercial solar panels independently after a while. Giga New York employs up to 15,000 workers. Tesla’s cell production unit is still taking baby steps, but it is worth an enormous 700 million dollars.

This is the second factory owned by Tesla that assembles vehicles. It is a 9.3 million square feet space that currently hosts the final assembly of the Model Y and Model 3. Giga Shanghai is one of the largest production units owned by Tesla.

It is located in Shanghai, secured within the Pudong District. Construction of Giga Shanghai began in 2018, and Tesla began producing the Model 3 at the factory in the fall of 2019. Since then, the Gigafactory has doubled to create more production capacity for Tesla’s Model Y.

Tesla is using Giga Shanghai to expand its footprint. Musk and Tesla are looking to hire Chinese designers and implement a design studio to design vehicles specifically for the Chinese market. One of those vehicles could be the $25,000 Tesla Model 2.

The sheer size of Giga Shanghai is mind-boggling. It has a maximum capacity of 18 million square feet and a height of 100 feet. The component parts for the Model 3 and Model Y vehicles manufactured in Giga Shanghai are shipped in from the United States. Tesla and Elon Musk want this Gigafactory to be entirely autonomous for producing electric, cost-efficient intelligent vehicles targeted at the Chinese market.

Giga Shanghai produces about 700,000 cars per year with just 2000 employees. Some of the cars assembled at Giga Shanghai are exported to Australia and other parts of Asia. Giga Shanghai is pretty expensive; it costs 10.85 million yuan for every 7200 square feet. The math is about $2 billion. That’s not even all because Giga Shanghai isn’t complete yet.

Giga Berlin was announced by Elon Musk in 2019. The factory, located in the municipality of Grünheide outside Berlin, had its construction kick off during the summer of 2021. According to Tesla, Gigafactory Berlin-Bradenburg will be the most advanced high-volume electric vehicle production plant in the world.

Starting with the Model Y production at launch, we will establish original vehicle design and engineering for worldwide markets out of Germany. Europe has been thrown into a frenzy because of the current revolution in energy consumption.

The demand for electric cars as an alternative to internal combustion engine cars is beginning to rise. This demand has put Asia at the forefront because it supplies electric batteries. Countries in the European Union wanted to have a piece of the electric cake when Elon Musk announced another Gigafactory.

Everyone knows how much of an economic difference the presence of the Gigafactory in any location will make. Germany won the lottery, and Giga Berlin came to life in 2021. This Gigafactory spans about three square kilometers, and it has additional areas for offices and logistics.

Giga Berlin hopes to manufacture batteries, battery packs, and powertrains. It would also be the assembly unit for the Model Y and other electric cars in Tesla’s lineup in the future. The plant employs over 8000 workers, and Tesla is confident it can produce a car every 45 seconds.

In terms of production, Giga Texas is not a Gigafactory yet. This factory is on this list because Tesla plans to manufacture battery cells and assemble cars. It is located in Austin, Texas, and it now serves as the corporate headquarters for Tesla.

Construction of the factory began in 2020, with the first Model Y rolling off the line late in August 2021. Giga Texas covers an area of about 10 million squares, and it employs thousands of people. It is planned to be the primary production plant for the Tesla Cybertruck and the Semi-Truck.

It will also be responsible for producing Model 3 and Model Up cars for the eastern part of the United States. Giga Texas is still in its early stages, but it already costs over $1 billion. We can’t close this article without mentioning the Fremont factory.

This is where Tesla’s initial projects began, and it is said to be the mother of Tesla’s creations. The Fremont factory employs over 10,000 employees and has 5.3 million square feet of area. There are whispers and rumors that this billionaire CEO has plans to build another Gigafactory on the Asian continent.

If we are to guess, it would probably be in Japan. With Panasonic so close, it would be the practical choice. Nothing is confirmed yet, but who knows how Musk thinks? We wouldn’t be surprised if he announced a Gigafactory for the United Kingdoms.

Thanks for reading till the end. Comment what’s your opinion about this information “Elon Musk MASSIVE NEW $13.5 Billion Tesla Gigafactories“.