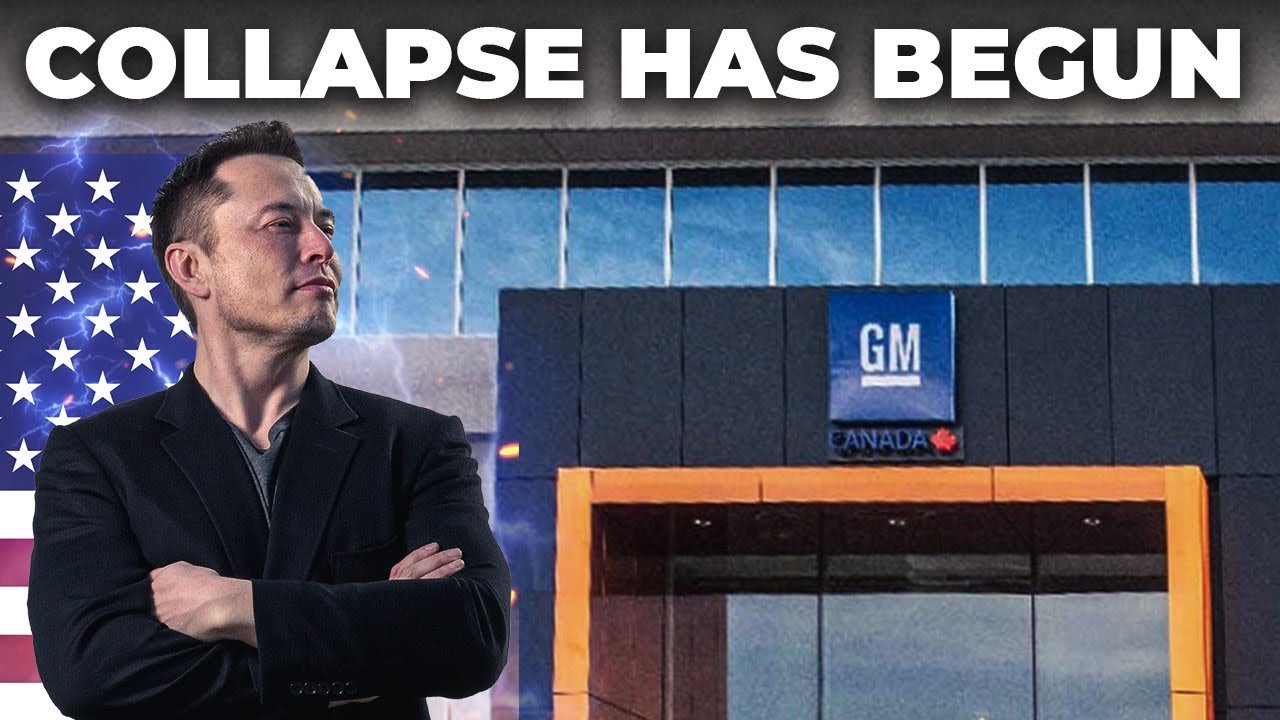 Elon Musk’s “Tesla Destroyer” General Motors(GM) Is Down Nowadays: For some reason, President Joe Biden seems to think General Motors is the gold standard for EVs. Tesla has been and continues to dominate the EV market. Other car manufacturers are only trying to catch up.

Some car manufacturers, especially those slowly transitioning from internal combustion engines to electric vehicles, have made it evident with the slump in sales of their EV products that they are just finding their feet.

An example is General Motors; the automotive manufacturer announced that its total sales for the fourth quarter of 2021 were 440,745 vehicles; their sales saw a decline of 43 percent. That’s not even the point; out of these 440,745 vehicles, only 26 were EVs.

If this performance is what President Joe Biden refers to as the gold standard for electric cars, the EV market shouldn’t exist because it would be a failure. Tesla’s supposed killer, General Motors (GM), is down, and it is down pretty bad. Join us today as we look at how far GM has fallen in the EV market.

You must have heard about the electric offerings from GM, right? The Chevrolet Bolt EV was very popular at some point, but sales have dropped by 99.63 percent. They sold only 25 units in the fourth quarter of 2021.

With its exemplary crab walk mode, the highly anticipated Hummer EV didn’t do anything to raise sales. GM only sold one in the last quarter of 2021, bringing EV sales to 26. Steve Carlisle, GM’s Executive Vice President, stated that the company is more focused on high-demand products.

He said that GM focused on high-demand products all year, and the strategy worked. He also mentioned that GM’s dealers, engineers, and supply chain moved mountains to satisfy their customers despite the record low inventories caused by semiconductor supply chain issues during the third and fourth quarter of the year.

If you wonder why the sales of Chevy Bolt have dropped to almost nothing, don’t go anywhere, we are about to clear things up for you. It all started with a recall. Everyone knows how bad that can be for an automotive manufacturer’s reputation.

In August 2021, GM had to recall more than 140,000 bolts for battery fire risk, and since the recall, it has kept its Orion Assembly Production plant closed. They only opened it for a couple of weeks in November to make replacement bolts for customers waiting on recall repairs. This is not the end; a spokesman for GM hinted at the situation lingering this year.

GM has notified its employees that the downtime of the Orion Assembly Production Plant will extend till February 2022. It has also mentioned that it will continue to prioritize recall repairs and the replacement of battery modules in the meantime.

The article in which GM made this statement also revealed that GM has plans to repurpose the Orion Assembly Production Plant to make new electric trucks using their new electric platform called Ultium.

The automotive manufacturer has submitted a tax exemption request to Orion township to invest 160 million dollars for a new battery pack assembly line at the plant. The Tesla owners club of Silicon Valley dropped a tweet saying that GM only sold 26 EVs in the last quarter of 2021.

They mentioned Elon Musk, and he replied with “room to improve.” In a press release in 2021, GM spoke about the first 2022 GMC HummerEV Pickups being produced at Factory Zero. It stated that customer deliveries would soon begin as part of its vision for an all-electric future.

GM might not be keen to say it, but that vision hasn’t taken off very well. Other manufacturers are fast-tracking their move towards an all-electric future. Tesla has dominated this round of the new energy age; it keeps capturing investors’ imaginations with a vision of what the next generation of vehicles will look like.

Volkswagen AG and Toyota Motor Corporation are the world’s two biggest automakers, and they are working overtime to catch up to Tesla. For every Tesla Elon sold last year, both companies sold roughly 10 to 11 cars. But those cars are internal combustion engine cars that are slowly being phased out of production.

The former chief of Aston Martin, Andy Palmer, said that when the two biggest car companies in the world decide to go all-in on electric, it is no longer a question of speculation. The mainstream is going electric. In his view, the shift to electric vehicles will be faster than everyone expects.

Andy has a history at Nissan and is often referred to as the godfather of EVs because of his role in developing Nissan’s battery-powered vehicle, the Nissan Leaf. Volkswagen and Toyota have taken different approaches to the EV market.

Volkswagen is facing Tesla head-on gunning for the competition. Toyota is spending heavily on EV development, but it is still spreading its bets, biding time as the electric revolution kicks in.

Volkswagen AG is a massive company with many brands under its umbrella, from Lamborghini supercars to Scania Trucks. The car company manufactures in over 120 locations and has more employees than the citizens of Detroit. It generates roughly 280 billion dollars annually.

Volkswagen’s CEO Herbert Diess keeps allocating huge sums of money for electrification. His largest plan is to give 100 billion dollars to EV and software development for the next five years. Diess keeps using Elon Musk as a yardstick, so much that he has got some people in VW’s ranks annoyed.

In October 2021, he welcomed Elon Musk as a surprise guest at an executive conference with about 200 top VW executives present. VW’s entry to the EV market is luxury cars like the Audi E-Tron and the Porsche Taycan.

They have tried more mainstream offerings like the ID3 hatchback and the ID4 SUV. VW has done well for itself, delivering more than 322,000 EVs 10 months into 2021. Just over 50 percent of its sales goal for the year. Analysts anticipate that VW will sell around 450,000 for 2021, but VW doesn’t think the number is good enough for a celebration.

The architecture shared by ID3 and ID4 will be the same platform used for 27 new EV models proposed for 2022. Volkswagen’s previous offerings are doing well. The Taycan is poised to outsell the famous Porsche 911. More electric offerings like the fully electric Porsche Macan are also expected from the manufacturer in 2023.

Toyota is a long way ahead of GM regarding EV potential. Even though they doubled down on the concept of hydrogen-powered cars, which didn’t work out well some years past, its plans for the future look solid. Toyota has stated at a news conference that it doesn’t want to tie itself to just one option, so as they head into uncertainty, they believe diverse solutions would be the answer.

However, Toyota has regaled the public with a view of its fleet of future products. At a media briefing in Tokyo bay, Akio Toyoda, the current president of the Toyota Motor Corporation, had five EVs surrounding him.

He delivered a brief sales pitch for each car before raising his palms to the skies, where another curtain dropped to reveal 11 more EVs. Toyoda announced plans to roll out at least 30 EVs by the end of the decade.

He stated that Toyota would dedicate 70 billion dollars to electrification in that span, and half of that money will go to fully electric models. By the end of the decade, Toyota hopes to sell 3.5 million EVs annually. This is almost double the target it had set for itself about seven months earlier.

Toyota wasn’t always open to the idea of electrifying its lineup, but in December 2021, the company vowed to sell only zero-emission cars in Europe by 2025. A few days in North Carolina after that declaration, Toyota hosted the governor and hundreds of other guests at a news conference to announce that the state would be home to its first battery plant in the United States.

The investment totaled 1.29 billion dollars. Toyota has a lot of enthusiasm for its electric campaign, but VW already has a headstart, a very good one, to be frank. Tesla isn’t resting on its heels, and it is doing some upscaling of its own.

The company closed in 2021, with a delivery of over 936,000 vehicles, an increase of almost 90 percent. Tesla has plotted an investment plan of 188 million dollars for its Shanghai plant to upgrade equipment and increase production far beyond the stated 450,000 units annually.

It also plans to employ 4000 more workers, increasing its workforce to about 19,000. It has invested in two new assembly plants outside Berlin and in Austin, Texas. These plants are also gearing up to start making Model Ys.

The best part is that Tesla isn’t running out of demand, so all these additional upgrades to scale up production would prove to be profitable. Tesla’s investor relations chief Martin Viecha told the Deutsche Bank Conference that wait times for the Model 3 and the Model Y have stretched to more than six months.

A Deutsche Bank analyst Emmanuel Rosner said that with the demand for EVs outdoing the industry’s ability to produce, success in EV is no longer about the order book; it is rather about production capacity and the ability to secure supplies and best cost.

It is in this aspect where Tesla feels it has a considerable lead. Many people are glad to see Tesla competing for the EV throne, as other carmakers are rising to the challenge.

The Silicon Valley-based company has the edge over everyone in software; Toyota and Volkswagen will have to catch up on that. Let’s hope that GM is not left behind in this fascinating race to an all-electric future for cars.

Thanks for reading till the end. Comment what’s your opinion about this information “Elon Musk’s “Tesla Destroyer” General Motors(GM) Is Down Nowadays“.