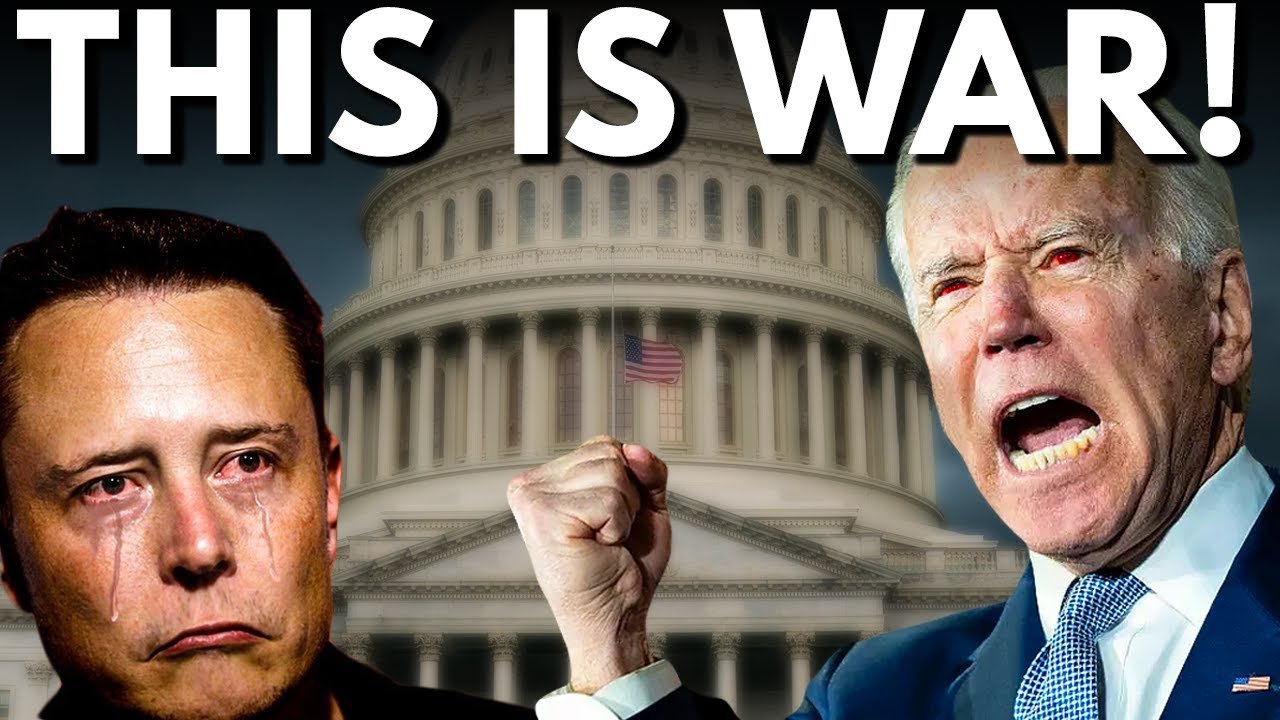 Why Joe Biden Hates Elon Musk – Musk Vs Biden: Elon Musk has never held back in calling people out. May it be his constant war of words with Jeff Bezos or replying to flippant Twitter users, Elon Musk has never been one to shy away. Now, he’s taken on someone you will never believe! The US President! Joe Biden.

Join us in today’s article, we will explain what our new president did that made Elon Musk so angry and exactly why Elon Musk has a bone to pick with Joe Biden.

At the Code Conference held in Beverly Hills, California, while giving a speech on stage, Elon Musk criticized Biden’s administration by saying that it was biased against Tesla and controlled by unions.

This seemed like a pretty direct verbal attack on Biden. But why is Elon Musk taking shots at the President? Let us explain. It all began when in early August of 2021, Joe Biden, the president of the United States, called all the leading auto industry stakeholders to the White House.

We have the top brass General Motors Co., Ford Motor Co., and Stellantis NV in attendance but do you Notice who is clearly missing from the list? A popular name and the leading name for electric vehicles? Yes, Tesla was snubbed from the invitation.

To put this into context, it’s the same as if the football coach decided to discuss game strategy with the entire team except for the captain.

Also Tesla, Toyota Motor and other automakers are also criticizing a proposed $12,500 in electric vehicle tax incentives that includes extra cash for union-made cars and trucks produced in the U.S. Executives with the automake rs, including Tesla CEO Elon Musk, said the $4,500 incentive for vehicles assembled in a union plant unfairly favors General Motors, Ford Motor and Stellantis.

Hourly workers for those automakers – traditionally known as the Detroit 3 – are represented by the United Auto Workers union. Elon Musk tweeted, “This is written by Ford/UAW lobbyists, as they make their electric car in Mexico. Not obvious how this serves American taxpayers,”

Elon Musk has more reason to be angry at the White House Recently the SpaceX Crew Dragon Endeavour successfully returned from its second space flight. The team of four astronauts had completed a 200-day long-duration space mission on behalf of NASA.

A little while before sunset, following an automated re-entry descent at 7:06 PM Eastern Standard Time as shown during a live SpaceX webcast on its YouTube channel, the mission lifted off to orbit the SpaceX Falcon 9 rocket last Wednesday.

This fully automated capsule reached an unprecedented altitude of 585 kilometers, thus bypassing the international space station by 160 kilometers. The Dragon’s Hold has been inspired by the design of the cupola of the social law, and nonprofit organizations provide the astronauts with breathtaking views of Earth from space.

One major goal of the Inspiration4 mission was to raise $200 million for St. Jude Children’s Research Hospital. It had raised $160.2 million by Saturday. Celebrating after Inspiration4 splashed down, Musk pledged to contribute $50 million personally — pushing the campaign’s total raised to $210 million.

The SpaceX flight has received many messages via Twitter to congratulate the crew for a successful mission. Top NASA officials have congratulated Musk and SpaceX on the Inspiration4 mission.

To explain how important this mission was, even SpaceX competitors came forward and acknowledged it too. Not only did accolades pour in from Boeing, Lockheed Martin, but Blue Origin and Musk’s peer and rival Jeff Bezos also congratulated Elon Musk on social media.

But who did not comment on this great ordeal? The White House! Even though Elon Musk had recently stated he would stay out of politics, he could not help himself and publicly talked about his disappointment that Joe Biden had not congratulated him or his company SpaceX.

Why was Tesla snubbed? The only reason that comes to mind when we wonder why Tesla was snubbed is because of two obvious differences. One that the giants Ford, General Motors, and Stellantis have deep roots in the U.S.

Also, the three companies that have been invited use union laborers. This was highlighted by the fact that United Auto Workers President Ray Curry, was also invited to be on the White House lawn.

Tesla was probably not invited because the Tesla factory workers are not unionized and President Joe Biden is an ardent supporter of unions.

Biden’s nod to the union comes as his party is working to recapture the white working-class voters who used to be part of the Democratic core ahead of the 2022 midterm elections, said Paul Sracic, a Youngstown State University professor of politics and international relations.

The White House was asked if Elon Musk had not been invited to the Auto Conference due to his anti-union stand. In response, the White House Press Secretary said, “Well, these are the three largest employers of the United Auto Workers, so I’ll let you draw your own conclusions.’

What was the White House response? Elon Musk, the CEO of Tesla, used his usual battleground, Twitter, and took a shot at President Biden after the success of SpaceEx flying civilians commercially into space.

The White House has yet to respond directly to Elon Musk and his comments but the union auto workers president has responded. She tweeted that Elon Musk needs to stop whining.

According to her tweet she believes that good workers should not have to punch out of democracy when they punch into work. Good leaders embrace their smart workers instead of being afraid of them.

Well, we find it a big irony coming from Estrada who, in 2017, was under investigation by the Federal Bureau of Investigation due to union corruption. Now this makes us wonder, when she says smart workers is she talking about people who work smart?

That is, people who don’t get caught while taking advantage of the money from the people they’re supposed to be taking care of? Tesla and unions The Tesla plant in Paolo Alto, California employs about ten thousand employees.

The United Auto Workers has made several attempts to organize a union there but Tesla has resisted all of its efforts. In 2019 Tesla made it clear that he had violated Labor Laws when he tweeted some anti union comments in 2019.

In 2018 Tesla tweeted that his workers would lose their stock options if they attempted to unionize which brought him under the scrutiny of the National Labor Relations Board. They declared his stance as illegal.

Later, Musk had to delete his tweet and also rehire a Tesla Union Worker who had been fired. Others respond to the snub Now let’s talk about some very interesting tweets.

One of Musk’s 60 million followers on the social networking platform Twitter asked him, “The President of the United States has refused to even acknowledge the 4 newest American astronauts who helped raise hundreds of millions of dollars for St. Jude.

What’s your theory on why that is?” Musk replied, “He’s still sleeping.” This is an echo of Trump’s joke for Biden in which he called Biden Sleepy Joe. A short while later someone else tweeted a modified image from the movie Alien in which an Alien labeled United Auto Workers is grabbing onto the victim which is labeled Biden.

Musk responded to this provocative image by saying it seems that way. Tesla has benefitted in the past from a $7500 tax credit for buyers of electric vehicles. This allowed sellers to charge more for the cars than they otherwise would have.

Now, however, buyers of electric vehicles from Tesla and General Motors do not qualify for that tax credit any more due to the number of plug-in cars they have distributed in the past.

Biden has pointed out that the United States is very much behind China when it comes to electrification and that it’s time to catch up. China is one of the most massive and fastest growing markets full of eager buyers for electric vehicles.

Congressman Peter Welch agrees. When he was asked why buyers should be given incentives to purchase electric vehicles he said “We really want to accelerate adoption that requires that we make it affordable and we also want to accelerate implementation so that our car manufacturers are going to be the center of electrical vehicle manufacture in the whole world.” Going back to the tweets, a twitter user defended Biden from Electric Cyberfarmer’s tweets.

The other Twitter user pointed out that Biden was running a nation during a pandemic, he was dealing with post-war intelligence briefings, security threats, tax and legislation issues and more and that stoking the egos of billionaires wasn’t his job.

Thanks for reading till the end. Comment what’s your opinion about this information “Why Joe Biden Hates Elon Musk – Musk Vs Biden”.