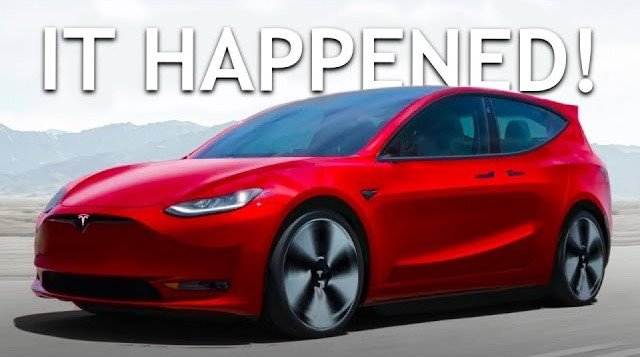 Elon Musk Just Revealed The Insane New Tesla Model 2 Update: By now, it shouldn’t be any surprise that Tesla is fully on the path to total domination of the car market, in every segment possible. They tackled the large sedan with the Model S, the small sedan with the Model 3, sports cars with the Roadster, and so on.

But what is missing from the Tesla lineup? Maybe, something similar to a Volkswagen Golf? Well, they’ve got you covered with their upcoming project, with the Tesla Model 2. Want to know more? Stay tuned.

The $25,000 Tesla You may find the idea laughable now as all of Tesla’s cars have been getting more and more expensive as time goes on. Tesla made a big statement in the auto business when it unveiled the Model S Plaid as the quickest (0-60 mph) series-production automobile on June 11, 2021.

It wants to push the envelope at the low end of the spectrum over the next few years, not in terms of acceleration and performance, but in terms of price. Alongside working on the new 4860 batteries, it is designing an EV with a price tag of $25,000 to fully democratize electric automobiles.

Tesla hasn’t released the name of their $25,000 electric car, but it’s been dubbed the Tesla Model 2 and even the Tesla Model Q in the media. Elon Musk, the company’s co-founder and CEO, indicated during the company’s 2021 annual shareholder meeting that it does not intend to employ the former.

We’ll call it Model 2 for ease of comprehension and conversation though.

The development of the $25,000 Tesla is expected to be influenced by its first R&D facility outside of the United States, from basic design to final testing. Tesla China President Tom Zhu acknowledged in an interview with Xinhua Net that the business will be able to design, engineer, develop, and test models at this foreign plant.

The new R&D facility will most likely open this year. Tesla has discussed the ultimate aim of the Tesla China R&D center on several public occasions, according to Zhu, signaling that the $25,000 project will be the center’s star project.

He hinted that the next entry-level Tesla will be a worldwide model rather than a China-only vehicle. Tesla’s objective of 100 percent localization in China is close to becoming a reality. Xinhuanet.com reported on August 18, 2021, citing a Shanghai Pilot Free Trade Zone (FTZ) source, that the firm might achieve 90 percent localization there by the end of 2021.

With 100 percent localization, Tesla might charge a very cheap price for the Model 2. Meeting the goal price of $25,000 is difficult given the high level of quality Tesla plans to provide even in its most basic car. The corporation, on the other hand, is adamant about achieving that goal.

Although the LFP chemistry will keep the battery costs low, the corporation can do more. A Drastically Different Tesla? The entire self-driving package (Tesla Autopilot) will most likely be available in the cheap Tesla Model 2, providing autonomous features to a wider audience.

Musk verified this during the 2020 Battery Day event, stating that Tesla is confident in producing a fully autonomous $25,000 Tesla model in three years. The Tesla Model S features one of the most futuristic automotive interiors, and its new yoke-like steering contributes significantly to this impression.

Tesla is planning ahead and may not include pedals or steering in a production Model 2, according to the Twitter user and Tesla tracker Sawyer Merritt, who cited Musk at a company meeting.

Of course, we don’t expect this to work on every Model 2, given most nations’ rules need pedals, brakes, and controls, but it’s possible that a variation with the highest version of FSD may have a cleared-out cockpit.

Having no steering wheels or pedals would be a sharp departure from the very concept and expected features of a production car. It will remain to be seen exactly what direction Tesla will take. But what will it look like from the outside? Instagram user Sugarchow (Instagram handle: sugardesign 1) created a Tesla Model 2 doodle that has been making the rounds online.

It depicts the $25000 Tesla car as a tiny hatchback to compete with the VW ID.3 and Nissan Leaf, like with other rumors. Customers in Europe might be the primary target for Tesla’s VW ID.3 rival, but in the current scenario, China has the most promise for a cheaper Tesla.

Following the Made-in-China Tesla Model 3 launch event in January 2020, Tesla shared a design drawing on Chinese social media. Musk also claimed at the event that the business wants to establish a design and engineering center in China in order to build an original automobile for global consumption.

Tesla then requested Chinese designers to submit portfolios in response to the statement. Soon after, the business went on a hiring binge in China for the Gigafactory.

The Tesla Gigafactory Shanghai has a manufacturing capacity of 450,000 units per year, and according to a new report from new.qq.com, Tesla is already operating at full capacity. If current trends continue, the firm will reach 100% capacity utilization in its first full year of operation.

According to Bloomberg, the Tesla Gigafactory Shanghai produces electric vehicles for Hong Kong, European nations, Australia, New Zealand, and Singapore, in addition to China. We’ve heard all about China but what about one of its neighbors? No, it’s not North Korea.

Russia isn’t the most EV-friendly country right now, so it’s no surprise that a Tesla facility there was never really considered.

However, after argumenti.ru claimed on September 19 that Tesla was preparing to build a facility near Korolev, Russia, Musk responded the next day on Twitter that the business had not made a choice on a new Gigafactory location.

Russia aims to have 72,000 electric vehicle charging stations and 1,000 hydrogen filling stations by 2030, according to local media sources, which should be of interest to Tesla’s strategists as they design additional gigafactories this decade. Blade Battery Use According to recent media speculations, Tesla may employ BYD’s Blade batteries in the Model 2.

BYD expects to provide Blade batteries to Tesla beginning in Q2 2022 (April-June 2022), according to the Financial Associated Press, and that these batteries have entered the C-sample test phase.

According to tech.ifeng.com on August 11, 2021, BYD later issued a statement claiming that it has never hinted or claimed that Tesla will utilize its Blade batteries. The Financial Associated Press reported on October 21, 2021, that Tesla has placed a 10 GWh battery pack order with BYD.

If we assume each battery pack has an energy value of 50 kWh, that translates to 200,000 battery packs. That would probably be enough for a quarter. Tesla sold 232,025 Model 3 and Model Y vehicles in the third quarter of 2021.

The Blade batteries with Lithium Iron-Phosphate cells, according to BYD, provide unprecedented levels of safety in the EV sector. The Blade Battery’s surface temperature reached just 30o – 60o C in a nail-penetration test, and it released neither smoke nor flames.

Another advantage is its longevity, which the manufacturer claims may endure for 1.2 million kilometers (almost 750,000 miles) after 3,000 charging/discharging cycles. With the BYD Battery, the BYD Tang has a range of 505 kilometers (314 miles).

These batteries are made in the Chinese city of Chongqing. There are some issues though. Tesla is experiencing hiccups with the 4680 cells, Musk suggested during the Q2 2021 earnings conference call.

Prototype production or limited production isn’t challenging, but mass-producing them is proving difficult. “We have a challenge with basically what’s called calendaring, or basically squashing the cathode material to a particular height,” Musk said.

Musk mentioned at the end of the Q2 2021 earnings conference call that the Model 2 battery cells might not be in the 4680 configurations and that an alternative format might be available.

He said: “I see us sort of like consolidating around a 4680 nickel-based structural pack for long-range vehicles. And then not necessarily a 4680-format, but some other format for iron-based cells.”

Tesla may employ a 45 kWh (total/gross) LFP battery pack with a range of roughly 250 miles, making it a reliable daily vehicle in urban environments.

The business provides a CATL 55 kWh LFP battery pack in the Model 3, which has a range of 468 kilometers or 291 miles (NEDC/China). Renault revealed in July 2021 that the new Renault 5, a possible contender to the Tesla Model 2, will have a range of 400 kilometers (249 miles) in Europe’s WLTP test cycle when it releases in early 2024.

It will be 33% less expensive than the Renault Zoe, which will cost roughly $24,000 new. Other prospective tiny EVs in Europe are expected to have similar pricing and range predictions.

To retain its competitive position, the Tesla Model 2 must have a range of at least 250 miles in addition to a base price of around EUR 28,000. The majority of options might use a single rear-wheel-drive powertrain, with an AWD performance variation competing with the Alpine R5 and possibly the Seat Urbano Cupra.

The internal environmental impact assessment procedure for the Tesla Model 2 began in January 2021, according to Sina Auto, and the reveal might take place in the second part of the year at the 2021 Guangzhou Auto Show (November 19-28, 2021).

Tesla doesn’t make premieres at motor shows, and we didn’t think that would change anytime soon. The Tesla Model 2 was not unveiled at the Guangzhou Auto Show.

Tesla will almost probably have a business celebration for the world premiere of a critical product like the Model 2, which promises to democratize electric vehicles. According to a fresh rumor from The Paper, the ceremonial unveiling may only take a few months, and most likely not until 2022.

Thanks for reading till the end. Comment what’s your opinion about this information “Elon Musk Just Revealed The Insane New Tesla Model 2 Update”.