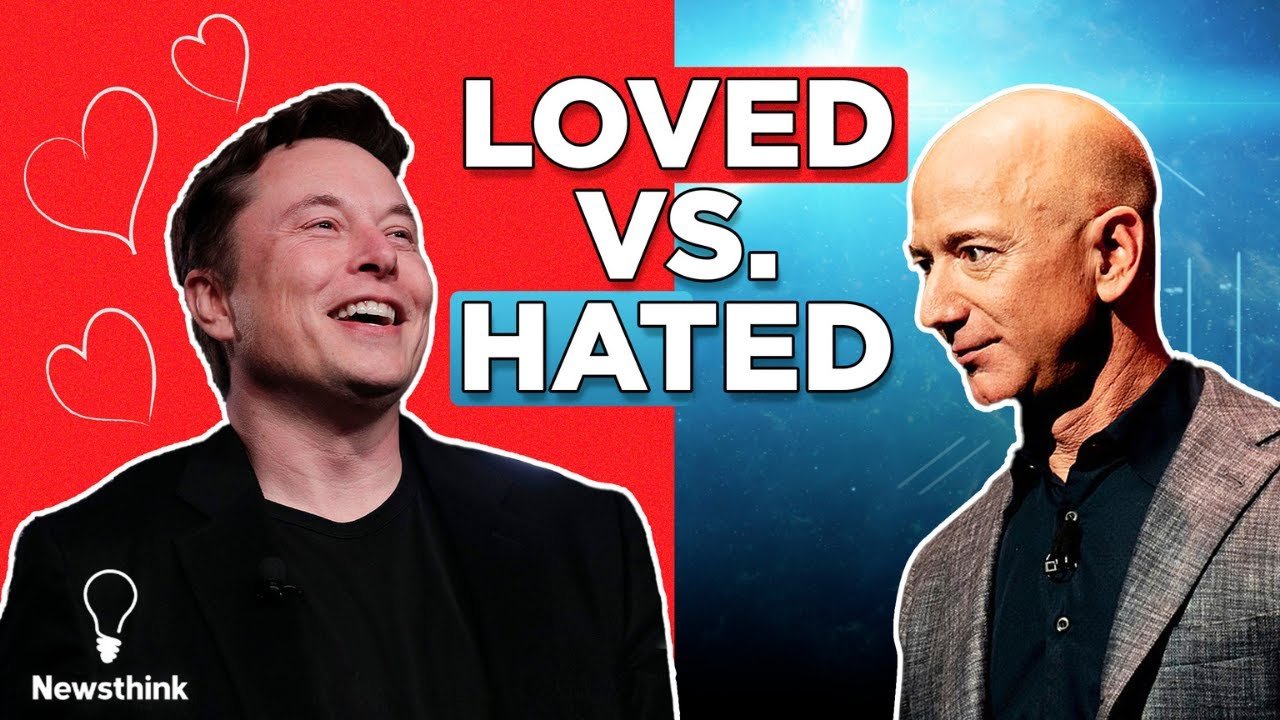 Why Jeff Bezos Gets More Hate than Elon Musk: When Jeff Bezos announced he was blasting off to space in the summer, there was a petition that he shouldn’t return to Earth. Actually, there were quite a few. Questions like this often pop up online: “Why do people like Elon Musk and dislike Jeff Bezos?” And Musk has just been named the 2021 Time person of the year.

We’re going to examine the reasons Musk has an army of fangirls and fanboys whereas Bezos not so much, and why Musk is starting to alienate some people as well.

A Quora user gave his two cents on why he thinks Musk is more likable: Maybe because…He engages people more via his social media. Musk loves to respond to the general public on Twitter, allowing him to build a powerful connection with his 65 million and counting followers.

He shares memes, dad jokes, inappropriate jokes – the opposite of a carefully crafted corporate image that appeals to his fan base. When Bezos uses Twitter, he’s super professional. Like this tweet about how Amazon proved its early doubters wrong.

NASA didn’t think so when it awarded SpaceX a contract to return American astronauts to the moon. Blue Origin protested the decision by suing and ended up losing, prompting Musk to share this meme of Judge Dredd from the film saying: you have been judged.

Bezos’ space venture is still trying to catch up to SpaceX. Although Blue Origin has now flown humans to space on New Shepard, it has never sent them into orbit around Earth, something SpaceX accomplished in 2020.

It has been a long and difficult road to get SpaceX to where it is today. Musk has opened up about his company often to the point of tears like in this 60 Minutes interview. So it’s really tough Letting out his emotions makes him appear real and relatable.

His blood sweat and tears are all in the name of trying to build a city on Mars. I call upon the public to support this goal. His supporters believe he’s the savior of humanity. Comparing him to Tony Stark aka Iron Man whereas Bezos has been likened to Dr. Evil which possibly has something to do with him being bald.

It might also have something to do with his riches from Amazon. Bezos grew Amazon into the behemoth it is today by brilliantly giving shoppers what they wanted when they didn’t even know they wanted it, like same-day delivery.

Amazon accounts for nearly 40 percent of all online retail shopping in the U.S. Despite his stunning success, e-commerce isn’t all that sexy so it doesn’t attract the kind of fans you’d get if you developed cool products, like what Steve Jobs did with Apple, or what Musk is doing with electric cars at Tesla.

Not to mention Amazon has its chorus of critics accusing it of acting like a monopoly and of mistreating workers. Headlines describe delivery drivers working long days with no bathroom breaks, reportedly peeing in bottles, and warehouse workers being pressured to work even faster.

Bezos has defended the treatment of Amazon’s staff but acknowledged the company needs to do a better job in his final letter to shareholders before he stepped down as CEO earlier in 2021. One of the reasons he stepped away was to focus on his space company.

Up until recently, Blue Origin wasn’t all that well-known. When it IS in the spotlight, Bezos has gotten flak. When he chose to rocket to space on the first Blue Origin flight carrying passengers, Democratic senator Elizabeth Warren was not too pleased about what she called a “joy ride” by a billionaire.

And on the following flight that took Star Trek star William Shatner to space, he appeared to interrupt Shatner’s emotional post-fight speech. Because you’re shooting up.

Some people called out Bezos for this moment. Musk has gotten his fair share of bad press, too. Tesla has recently faced lawsuits alleging sexual harassment and racist abuse at its Fremont factory in California, and a complaint that it failed to tell the public that its solar panels could catch fire.

Musk has apparently responded to the whistleblowing by promoting a new Tesla product, the Cyberwhistle inspired by the Cybertruck. He even tweeted: “Blow the whistle on Tesla!”

Further cementing the belief that he doesn’t act like a typical CEO which again plays to his fan base. However, the cult of Elon may be showing some cracks. Especially with his tweets about the pandemic. He’s called the coronavirus panic dumb.

Falsely predicted there would be no new cases of covid in the US by April 2020 And defied a local lockdown order to reopen Tesla’s Fremont factory. He also once called a diver who refused his offer of a submarine to save Thai boys trapped in a cave a “pedo guy” in a now deleted tweet.

When Musk surpassed Bezos to become the richest person in the world in early 2021 – his wealth appears to have rubbed some the wrong way. Democratic senator Bernie Sanders has been demanding billionaires be taxed more to which Musk responded: I keep forgetting that you’re still alive.

The United Nations food program director, David Beasley called on billionaires and specifically Musk to donate $6 billion, or 2% of his wealth, to help solve world hunger during an interview on CNN. Wake up, smell the coffee, and help.

In response, Musk said: “If WFP can describe on this Twitter thread exactly how $6B will solve world hunger, I will sell Tesla stock right now and do it.” Beasley clarified that the money is needed to solve the current crisis, not all world hunger.

Thanks for reading till the end. Comment what’s your opinion about this information “Why Jeff Bezos Gets More Hate than Elon Musk”.