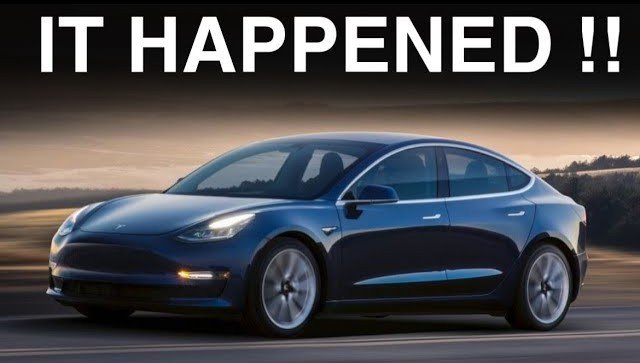 Take A Look Tesla Model 3 Update Leaked by Tesla Employee 2022: When electric vehicles hit the market in their initial stages, people looked at them in a different way; “eww, is that an electric car, who buys that?” But, now, people really love the way it is, and the main reason for the electric revolution is Tesla with their Model 3.

The new 2022 Model 3, which was evident to be, coming a few months back, with the company’s online update. With Tesla shifting its production to the 2022 model year. These model years aren’t much of a big deal for Tesla, as they are for most of the other manufacturers, as the electric automaker doesn’t wait for a new model year to implement significant changes in its vehicles.

Throughout the year, as they prepare for production, they regularly offer new features and improvements. Specific model years, however, correspond with more extensive modifications, just like the conclusion of each year. Why don’t we start our episode from the vehicle’s pricing itself?

Tesla has raised its prices by $1000 for the new Model 3. An unnamed base rear-wheel-drive Model 3 trim level has replaced the Tesla Model 3 Standard Range Plus, which was formerly the de facto base model. The all-wheel-drive Long Range and Performance variants continue to be in the lineup itself. Let us now look at the new model’s range.

The previous base Model 3 had an EPA-estimated range of 272 miles and provided a 10-mile improvement on a single charge over the Standard Range Plus. However, the new Model 3 is believed to have slower acceleration, with a 0-60 mph timing of 5.8 seconds as opposed to 5.3 seconds for the previous Standard Range Plus. “That’s odd!”

While its highest speed remains at 225km/h, it is powered by a single rear-mounted electric motor. Tesla automobiles are often improved in terms of performance with each year’s revisions, and now many Tesla lovers complain that the new Model 3 is lazier.

Furthermore, the only charging claim verified on the company’s website is that a 15-minute session on a Supercharger adds 327km of stated travel. Aside from that, unlike the regular 18-inch wheels, which are merely standard in terms of pricing, Tesla now comes standard with 19-inch wheels, which are selected by default on the online configurator.

The range is reduced to 267 miles with the 19-inch wheels. How about we talk about the car’s performance baselines? The Tesla Model 3 is pushed by an electric motor with 283 horsepower and 307 pound-feet of torque.

The Long Range model boasts a dual-motor configuration with a combined power of 346 hp and 389-pound feet of torque. The top-tier Performance variant produces 450 horsepower and 471 pound-feet of torque.

The base model seems to have a Rear-wheel-drive drivetrain, while the other two models get an all-wheel-drive drivetrain. For a better grip on speed, they all have a single-speed drive mechanism. Hmm, not bad, right? But guess what, it’s bad, for a little bit of loss in power. That’s just for the base variants; you could always buy more power with a little bit more cash. (Note to VO: sound ‘little’ by modulating voice as needed.) Well, it isn’t much of a deal, if you don’t mind it.

So, does this imply that the new Model 3 disappoints its customers? Well, when compared to the Model Y, the vehicle may appear to be expensive, despite the power drop. Range enhancements are made to the Model 3 and Model Y long-range variants.

These are around five and four-mile advances, respectively. Some of this may be a probable movement ahead of the introduction of the Model Y versions built in Texas with bigger 4680 cells and a new body structure. Apart from all of that, the car is simply great. Let’s do some taxes, huh?

Regarding tax incentives, Tesla is optimistic about the return of the federal EV tax credit for it, which, at $7,500 or more, raises the price variation to $500 but may play a significant role in generating sales for the company.

Unfortunately, Tesla is not now eligible for the incentive because they have recently reached a manufacturing ceiling of 200,000 units, although new legislation may soon repeal that law. Tesla pricing fluctuations are nothing out of the ordinary, but in this case, it might be due to the carmaker being caught off guard by the ever-increasing demand for Electric Vehicles.

Regardless of what Tesla tries to attempt to moderate the demand, it appears that consumers are still screaming for the new Model 3 Standard Range Plus SR+. Despite the significant increase in price, large audiences continue to crave it.

Orders for the SR+ Model 3 are currently showing a July 2022 delivery date. The incredibly long wait can be seen on both the Canadian and US sites, and it only applies to the normal white paint and aero wheels. The Model 3 SR+ in all other configurations will be available in April 2022.

Don’t worry; these are only estimates, and there’s a strong chance you’ll get your hands on the car sooner than you might expect, but the predictions provide a solid indication of how many people are putting orders over time.

The new date comes just two weeks after Tesla pushed their delivery dates into June, indicating that they might have cleared out an entire month’s production capability in that time frame. “That quick?” That could be resolved! Tesla might aim to shorten consumer wait times by delivering a vehicle equipped with the LFP battery.

Tesla used this method a few months ago in California, and the first LFP Model 3s appeared on Canada’s existing stock website only yesterday. Customers that were chosen for these upgraded batteries received their automobiles right away, rather than having to wait until the new year.

The Tesla Model 3 is one of the most fuel-efficient electric vehicles on the market today. Even the entry-level Model 3 has a competitive span and range statistics in the market. Obviously, the Long Range and Performance models have shorter ranges.

The Model 3’s price range varies based on the trim level selected. So it is evident that the Model 3 overshadows all its competitors, like the Chevy Bolt and Kia Niro, which hits the market with bigger battery packs than the Model 3, but their range is shorter.

The Nissan Leaf has the smallest battery capacity in the competition; hence its distance estimations and range are the lowest. Coming to the end of the episode, let’s ask ourselves, does this new 2022 Model 3 a great deal?

Well, if you are a big Tesla enthusiast, you might be hurt by the lack of power with the new model, but that can be solved with a little bigger budget. Anyways do make sure to drop your views about the new model in the comments section below.

Thanks for reading till the end. Comment what’s your opinion about this information “Take A Look Tesla Model 3 Update Leaked by Tesla Employee 2022“.