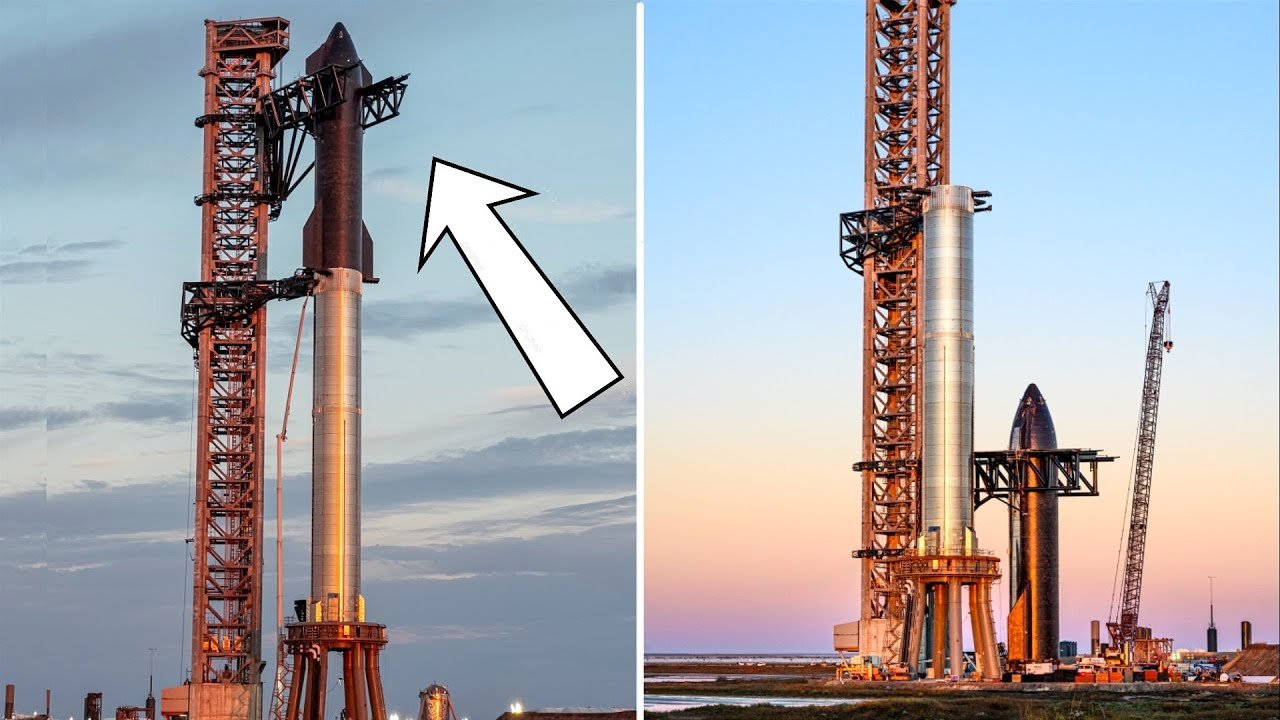 SpaceX LIFTED Ship 20 With Chopstick Arm’s For The First Time: SpaceX is developing Starship at the Starbase facility in Boca Chica, South Texas. SpaceX founder Elon Musk will provide an update about the spacecraft’s development progress and share details about the planned debut orbital flight test on Thursday, February 10 at 8:00 p.m. CST.

For the second time ever, SpaceX has fully stacked a two-stage Starship rocket, once again creating the largest launch vehicle prototype ever assembled. This time around, though, SpaceX used building-sized arms installed on Starbase’s ~145-meter-tall (~480 ft) ‘launch tower’ to lift to grapple Starship, lift massive upper stage more than 80 meters (260 ft) off the ground, and lower on top of a Super Heavy booster.

After multiple days of apparent troubleshooting and false-starts and weeks of proof-testing with water bags weighing dozens to hundreds of tons, the giant robot seemed to perform perfectly, pausing only once during the ascent.

After holding Starship S20’s weight for about an hour and attaching two smaller stabilization arms to the side of the rocket, the Mechazilla arms began to lift Starship in earnest around 10:27 pm CST. Around 10:45 pm, with the tip of Starship S20’s nose just shy of the top of the launch tower, the lift reached its apogee – multiple SpaceX drones swarming the rocket to document the milestone.

At their peak, the tower’s arms then swung Starship about 45 degrees until it was directly above Super Heavy Booster 4’s interstage. The launch tower’s Starship quick-disconnect (QD) arm – responsible for connecting the upper stage to ground systems – then swung in, partially deploying and ‘grabbing’ Super Heavy to fully stabilize the booster.

Finally, once the booster was secured and SpaceX was confident in the alignment of the two massive rocket stages, the tower arms carefully lowered Starship onto Super Heavy’s interstage, where several clamps grabbed onto the ship to fully mate the pair.

While the actual near-term utility of those arms remains ambiguous at best, their first successful use is an undeniably impressive technical achievement. SpaceX began assembling them less than nine months ago, beginning with the Starship QD arm around May 2021. SpaceX began installing the two main Mechazilla arms in October 2021, three months after assembly began.

Just three months after that, all three have come together for the first time to lift and stack the world’s largest rocket. Perhaps most impressive of all is that on the very first try, lifting Starship and stacking it on top of Super Heavy with the launch and integration tower took just three hours from the start of the lift to a fully mated rocket.

Additionally, though SpaceX did get lucky with minimal wind, it’s also impressive just how little uncontrolled movement was visible as Starship hung in the air hundreds of feet above the ground. Virtually no swaying was visible, meaning that the arms were doing their job of stabilizing the massive rockets in a situation where even a gentle breeze could make stacking Starship with a crane far too risky.

CEO Elon Musk will now have one of the most impressive accomplishments in modern spaceflight as a backdrop when he presents an update on the same rocket, hopefully shedding light on Starship’s next steps and the roles Ship 20 and Booster 4 might play in them.

Stay tuned for updates on the event, which is scheduled to begin no earlier than 8pm CST, February 10th (02:00 UTC 11 Feb). While the company prepares for the first spaceflight, it is already moving forward with its plans to build a second Super Heavy-class launch tower in the East Coast.

The company plans to build the second Starship launch site at NASA’s Kennedy Space Center Launch Complex-49 in Cape Canaveral, according to the agency. SpaceX officials previously mentioned plans to build a Starship launch tower at historic Launch Complex-39A, the launch site from where NASA Apollo astronauts lifted off atop Saturn V on a journey to the Moon half a century ago.

NASA and SpaceX are working to return humans to the lunar surface by 2025. SpaceX is developing a lunar-optimized Starship Human Landing System (HLS) to land astronauts on the moon as part of the Artemis program that aims to build a sustainable presence on our closest celestial neighbor.

The Starship launch tower will be built at the empty Launch Complex-49, it is an 175-acre land located north of Launch Pad-39A and Pad-39B at NASA Kennedy Space Center premises, shown in the map below.

SpaceX seeks to hire Build Engineers for ‘Starship Launch Pads’in Florida. “Our Build Engineers build unique, large-scale launch infrastructure associated with Cape Starship orbital launch pads. This team is on the front line as we design and build the launch pads for the world’s largest rocket,” the job application states.

Some of the tasks they are responsible for are: “actively participate in the design, fabrication and installation of complex infrastructure that help manufacture and launch Starship.” Engineers are working to develop a fully-reusable spacecraft.

The launch tower is designed to stack Starship atop the Super Heavy rocket and catch the vehicles as each return from space after completing a mission. SpaceX also seeks to hire Build Engineers for ‘Integration and Catch Tower’construction in Florida.

“The integration and catch tower will redefine ground support systems for launch vehicles as we know it, with the ultimate goal being to launch, catch, and relaunch orbital boosters in hours or days instead weeks or months,” the application says. “The Build Engineer role covers design for manufacturability concepts through integration and testing of the full tower.

You will be highly engaged on the primary and secondary structures of the tower, including designing tooling (assembly aides, welding, part fixturing, etc.) and processes (welding, large part movement, large structure integration) to rapidly build early versions of the tower.”

For Now, The company is preparing to conduct the first orbital flight test in early 2022. Musk aims to have a space-ready Starship spacecraft and Super Heavy rocket by 2023. If all goes as planned, the earliest inter-planet Starship cargo spaceflights could take place as soon as 2024 or 2026, when the orbits of Earth and Mars line up; both planets get closer to each other every 26 months.

Musk calculates that if SpaceX manufacturers a fleet of 1,000 Starships within the next 20 years to launch megatons of cargo and hundreds of humans to the Martian surface, humanity could achieve a self-sustaining Mars colony by the year 2050.

A fleet of Starships could launch every 26 months with all the necessary equipment so the first Mars settlers could build the foundation of humanity’s second home planet. “In order for life to become multi-planetary, we’ll need maybe 1,000 ships or something like that,” Musk said in November during an event with the U.S. National Academy of Sciences meeting.

“Long term, it’s essential for preserving the light of consciousness. Eventually, something will happen to Earth, hopefully not soon, either natural or man-made that would cause the end of civilization. The probable lifespan of civilization is much greater if we’re a multi-planet species.”

Thanks for reading till the end. Comment what’s your opinion about this information “SpaceX LIFTED Ship 20 With Chopstick Arm’s For The First Time“.