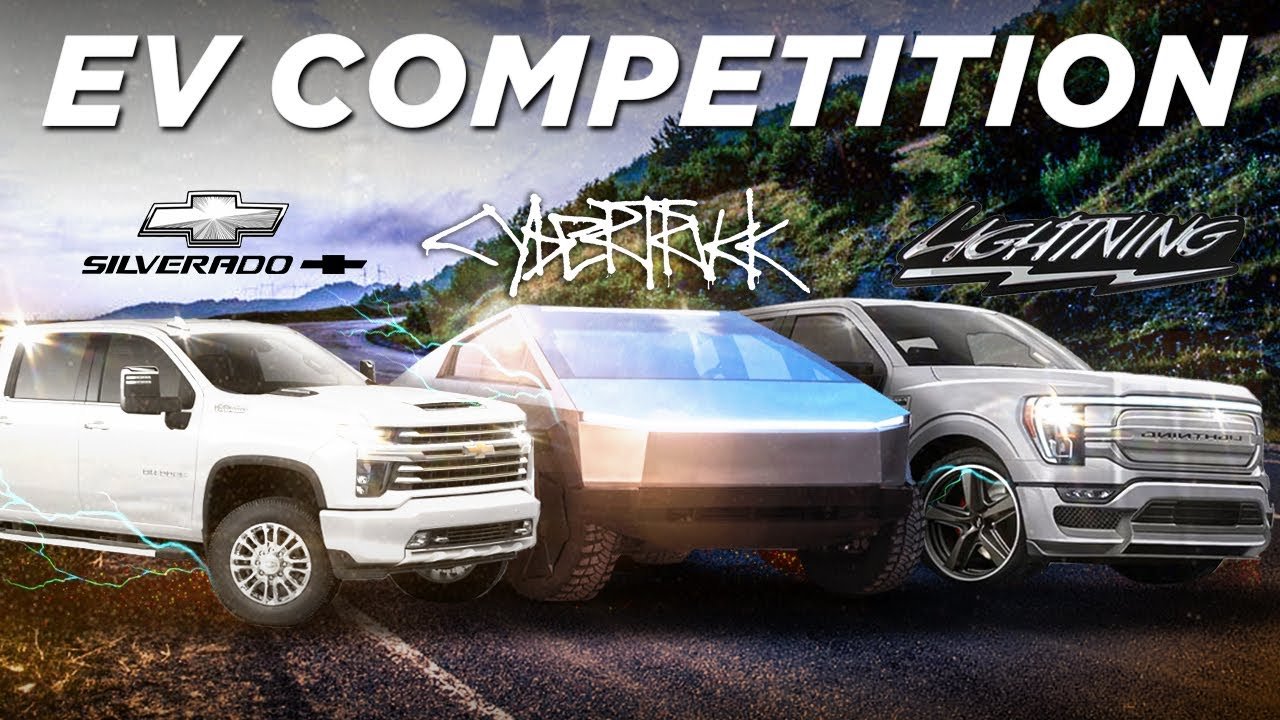 Tesla Cybertruck vs Chevy Silverado vs Ford Lightning: In today’s article, we will be going over the different Electric Trucks that will be available in the market and which one is the best option. All the top companies in the world like Ford, Tesla, and Chevrolet have started releasing their own line of electric trucks. So which one of these suits you the best? And are they all worth the price that the companies are charging them? Stay tuned till the end to find out more.

Electric is the new default. With Tesla currently leading the movement, almost all major car companies have started releasing electric models. From Mercedes to Volkswagen to GM, electric cars are found in most countries and will be more common in the coming years.

Once more charging spots and maintenance stations are built on the streets, we believe that there is nothing that can stop one from switching to electric. And that is exactly where these beasts come into the picture. Electric trucks are some of the best-looking motors on the roads right now.

Currently, there are five trucks whose names have dominated the game: the Chevrolet Silverado EV, the Ford F-150 Lightning, and the Tesla Cybertruck. It can be very confusing to decide among these three, especially when every car has a feature that the other one doesn’t. So today, we will be analyzing these three trucks using the following categories, price, range, charging, power, towing, and payload we will be helping you decide which truck suits you the best.

For an average middle-class person, price is perhaps one of the most critical factors. We do not mind compromising a bit on the quality if that means that we can save a couple of extra bucks from being shelled out.

There are a lot of expensive trucks in the market, such as the Rivian R1T, which would cost an individual nearly $70,000 to purchase, and the GMC Hummer, whose base model starts at $79,000 and the Edition 1 that sells for over a $100,000! But do not get demotivated because not all-electric trucks are sold at a price that will cause such a dent in your pocket.

The three models we are talking about today are sold in the same bracket, or so we can assume until their actual price is confirmed. The Chevrolet Silverado is expected to be sold at a price of $39,900, which seems to be the most common prediction across the internet. Other price predictions suggest that it could be sold for $42,000 or even $44,000, but they are all in a $5,000 range up or down from each other.

Moving forward, the Ford F150 Lightning is set to start off at a price of $39,975 and can go up to $95,000 once every available option is set to be released. There is a $1,700 destination charge that can be charged depending on where the delivery of the car is, but to start with, just like the Silverado, the Lightning is also somewhere between the $39,000-$40,000 range.

And lastly, the Cybertruck, which is one of Tesla’s most monstrous creations, is also set to be launched at $39,900, with the tri-motor drive, which can cost up to $69,900. So, as you can see, all three cars mark a point when it comes to price since they are all in the same range.

The range is essential when it comes to an EV. Depending on how far a car can travel on a single charge, many people consider the range to be the deciding factor while comparing EV’s. So let us see how our titans perform when it comes to range.

While Chevy hasn’t revealed the Silverado EV’s total capacity, we may reasonably assume it’s the same 200.0 kilowatt-hours as the Hummer in RST trim. Chevy claims that the standard Work Truck will have a reduced battery pack and capacity.

The maximum range on this battery pack is estimated to be anywhere 350 miles to 450 miles, which is fantastic if you are planning a long road trip. Moving on, there are two battery capacities available on the standard Ford Lightning. The business confirms 110.0 kWh for the base trim and 145.0 kWh for the extended-range model.

The Ford faces an upset in this round as its maximum estimated range is 300 miles. If the Tesla Cybertruck hits the market with the promised battery pack equipment, then it will be the undeniable winner of this round.

With a maximum capacity of 250kw per hour, this mammoth will be able to cross the 500 miles mark comfortably, giving it the upper hand over the other two competitors. The next judgment is based on.

The Ford F-150 Lightning yet again faces a setback, as it provides the slowest charging of the pack. The charging on this auto is 150 kilowatts. Now, just because we said it is the slowest, don’t misunderstand that it is slow in general.

Charging this car from 15% to 80% will only take approximately 40 minutes. Seems reasonable if you happen to step out for lunch while leaving your Ford to charge. Tesla comes a bit above the Ford with a 250 Kilowatt charger.

The Cybertruck may not have the fastest charging, but it definitely makes up with the range provided. The charging speed is something that many Tesla users have complained about, and thus Tesla is working on faster chargers and has introduced supercharging stations across multiple paths.

Finally, we have the winner of round 3, the Chevrolet Silverado, which charges at 350 Kilowatts, making it a lightning-fast charger as compared to the others. This speed means that the truck will be able to pick up 100 miles worth of charge in a matter of just 10 minutes, making it the best option of the 3.

Now, this is the one characteristic most people are looking for in a truck. The good news is that all these trucks are certainly packing some guns inside them. The Silverado comes at nearly 665 horsepower, which means that it can pace from 0-60miles per hour in approximately 4.5 seconds, making it pretty fast for a truck, yet the slowest among the three.

Up next, we have the Lightning, which certainly does live up to its name. Even though the car is only 426 horsepower, the car’s weight balances out the other factors, giving it a great pickup and the ability to pace from 0-100 in nearly 4 seconds, making it half a second faster than the Chevy.

And now, for the undoubted winner of this round, we once again have the Cybertruck. This car may seem like one that may not run the fastest, but don t forget, its a Tesla. Tesla is set to launch the world s fastest car this year, and they plan to do the same with their trucks.

With 800 HP, this truck can speed from 0-100 in just 2.9 seconds. So good news for all you fans of speed, the cybertruck will treat you well. And finally, we come to our last judging criteria:

At the end of the day, these are trucks, after all, so they need to do the standard “truck stuff.” Towing and Payload are two really big factors that most truck buyers take into account before purchasing a truck. In terms of towing and Payload, both the Lightning and the Silverado stand at the same level.

They can both pull up to 10,000 pounds, or almost 5000 kg in the right spec, and the Chevy has even promised a future HD version of their truck that will be able to pull up to 20,000 pounds. On the other hand, the Lightning wins the payload award, with the potential to tow up to 2,000 pounds with the smaller battery pack, while the Silverado comes up just short with a maximum payload capability of 1,300 pounds.

However, the Cybertruck yet again steals the show in both Payload and towing. It stands at a whopping estimated payload of 3500 pounds, which is almost twice the Payload of the Chevy and has a maximum towing capacity of 14,000 pounds on the basic model as well.

These specs only go to prove that automobile design has come a really long way, and with the rate that car manufacturers are progressing at, it only makes sense that they will get better at designing as the years pass. Which one of these trucks is your favorite?

Thanks for reading till the end. Comment what’s your opinion about this information “Tesla Cybertruck vs Chevy Silverado vs Ford Lightning“.