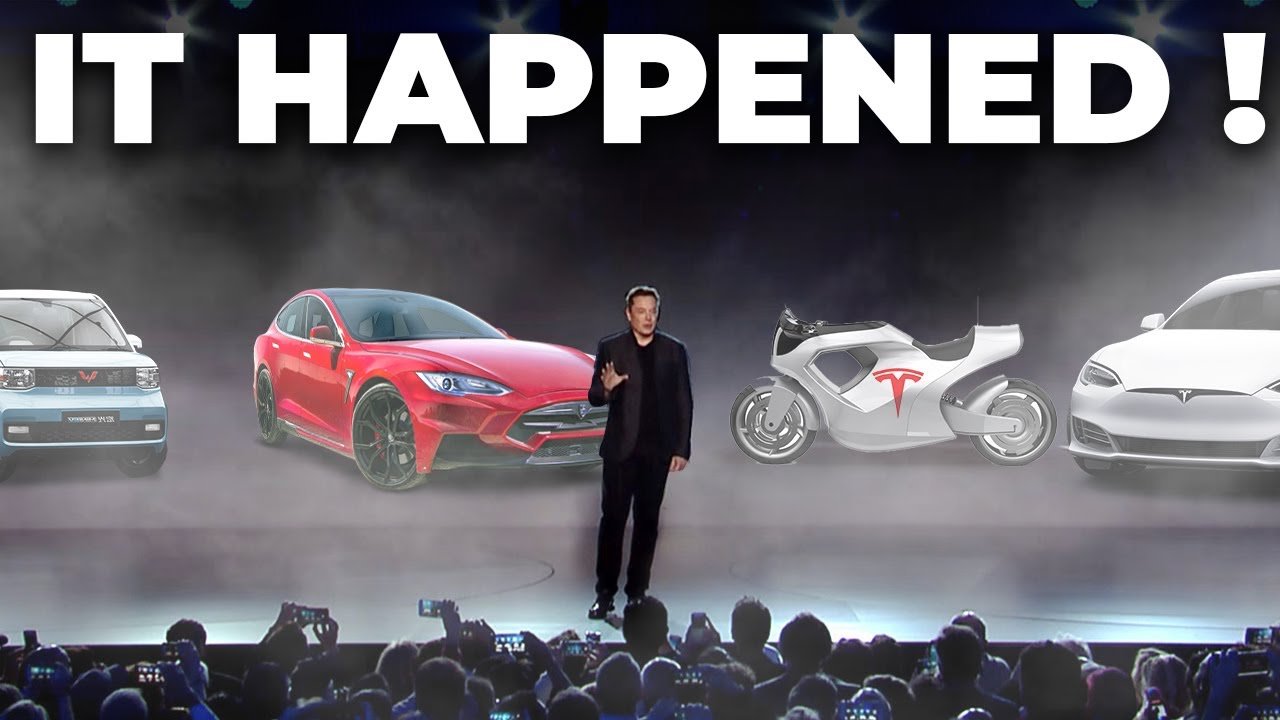 Take A Look Elon Musk Revealed 5 New Tesla Models for 2022: It’s no small business being one of the world’s largest and most successful automobile producers. Toyota, Volkswagen, and General Motors all have something in common.

They have an eye-watering number of vehicle models on offer. Tesla’s repertoire of cars, in comparison, is practically nothing, but how can Tesla change it?

Fully electric vehicles are becoming more popular. There are numerous causes for this, including increased safety and vehicle emissions requirements, technological advancements, and altering customer expectations.

However, Tesla Motors Inc. and its unique business model can be credited for a large part of the public’s acceptance and enthusiasm for electric vehicles. There are significant parallels between Tesla and the tech industry.

Tesla has embraced the tech industry’s disruption mantra. Like other tech startups, Tesla is attempting to disrupt established business structures in the staid automobile industry by selling directly to consumers.

Its product pipeline and founder have a devoted following similar to that of well-known tech businesses like Apple. And, like many other technological businesses, Tesla investors were patient through a protracted period of quarterly losses. They were eventually rewarded: Tesla reported profitability for the sixth consecutive quarter in the third quarter of 2020.

Perhaps all of this explains the way Tesla’s offerings are arranged. Tesla has been a one-car corporation for a long time. From the beginning of production of the Roadster in 2008 through the end of the program and the commencement of Model S manufacturing in 2012, Tesla has made significant progress.

Tesla currently has four major vehicles to choose from: the Model S, 3, X, and Y. Yes, it does say ‘SEXY.’ They were released in the following order: S, X, 3, and Y. Each of these vehicles caters to a specific vehicle category, ranging from high-end sedans to more economical sedans.

With that being established, let’s take a look at the cars Tesla is expected to release in the future. Some of these are confirmed, some are speculative.

The Tesla Cybertruck is, without a doubt, the most distinctive vehicle to hit the road in decades. It appears like whoever created the car has a personal hatred against curves and is a little too fond of PS1-era aesthetics.

Elon Musk’s pet project, however, has a lot more to offer than its strange angular form. The Cybertruck will also include all of the features that make a Tesla a Tesla. This includes a minimalist appearance, some of the industry’s longest range, and all of the high-tech features you could want.

There are a lot of similarities between Tesla and the IT business. Unfortunately, Elon Musk has stated that the Cybertruck will not be released this year, which means it will not be available until 2023 at the earliest. Elon Musk claimed that Tesla would be unable to produce enough 4680 battery cells for the Cybertruck and that the steel frame would necessitate the development of a completely new casting machine.

The single-motor Cybertruck, which is believed to be the last to be produced, will start at $39,990, $5,000 less than the cheapest Model 3. In the meantime, the dual-motor variant with an all-wheel drive was expected to cost $49,990.

The tri-motor Cybertruck, which was previously the top-of-the-line model, will cost $69,990. The price of the newly disclosed quad-motor model is still unknown, as it was never listed on the Tesla website.

Basic Autopilot will be standard on all four models, but the Full Self Driving option will be offered for an extra charge. That package costs $12,000 for now, but we expect the Cybertruck to be qualified for the $199-per-month FSD subscription as well.

The Tesla Roadster, which had previously been delayed a couple of times, was slated for a 2022 release. However, due to supply chain constraints, production will not begin until 2023. Elon Musk first announced the situation in September via Twitter and later verified it during Tesla’s annual shareholders’ meeting. That might be a slap in the face for those who have put down a $50,000 deposit on a car that is expected to cost $200,000 for the base model.

Tesla is planning a Founders Series vehicle that will be limited to 1,000 units and will cost $250,000; that’s real supercar money. The Tesla Roadster 2022 will be equipped with a 200-kilowatt-hour battery pack that, according to Tesla, will provide 620 miles of range. That’s an unheard-of level of range for an electric vehicle.

Even Tesla’s other vehicles, which offer an industry-leading range, fall short. The tri-motor Tesla Cybertruck, with a range of nearly 500 miles, and the Long Range Model S, with a range of 405 miles, are the next best options.

Good things take time, and given that the car was built from the ground up, unlike the original Tesla Roadster, which was built on a Lotus chassis, the ongoing delays are unsurprising. However, while the headline-grabbing power and performance stats are remarkable, they are only that for the time being. If the car lives up to the anticipation, only time will tell.

Electric vans and last-mile delivery vehicles have become a hot issue in recent months, and we expect that trend to continue in light of President Biden’s plan to electrify the entire US government vehicle fleet. The decision to purchase the vehicles from an American manufacturer was a significant part of that announcement, and we’ve seen GM, Rivian, and Ford all come up with electric van alternatives.

When an institutional investor brought it up during Tesla’s fourth-quarter results call on Wednesday, CEO Elon Musk popped that particular balloon.

Musk knocked down a question about whether Tesla would follow through on prior assertions that it would construct an electric van. Musk stated that Tesla would make an electric van in the future, but that cell production, like the Tesla Semi and a slew of other projects, is holding it up.

Tesla is working with its battery suppliers and on its own battery production plant to boost the number of available cells, but as with the last two cars we discussed, that remains the bottleneck for the time being. It could work as Tesla’s battery technology is still steadily improving, and Musk would definitely want to get into the action due to the rising lucrativeness.

Tesla hasn’t released the name of their USD 25,000 electric car, but it’s been dubbed the Tesla Model 2 and even the Tesla Model Q in the media. Elon Musk, the company’s co-founder and CEO, revealed at the company’s 2021 annual shareholder meeting that it had no plans to deploy the former.

According to rumors, Tesla has completed the Model 2 prototype in China. Ray4Tesla, a Twitter user, stated this in 2021 based on a Weibo post by a trusted source who goes by the moniker. The Chinese social media handle Ray4Tesla typically gets it right before others, according to Ray4Tesla, and the Weibo post is as follows.

The Tesla Model S boasts one of the most futuristic automotive interiors, with its new yoke-like steering playing a big part in that. Without pedals and steering, the interior of the Tesla Model 2 may look even more futuristic.

Autonomous driving concept cars with retractable pedals and steering are being developed by traditional automakers. Tesla is planning ahead and may not include pedals or steering in a production Model 2, according to the Twitter user and Tesla tracker Sawyer Merritt, who cited Musk in a company meeting.

Of course, because most countries require pedals, brakes, and controls, we don’t expect this to work on every Model 2, but it’s possible that a variation with the highest version of FSD has a cleared-out cockpit.

However, Musk has recently indicated that it won’t be happening anytime soon, likely due to the aforementioned battery issues. That does not mean that it won’t happen ever, and a Tesla EV in this segment may turn out to be absolutely crucial in the future rather than optional.

This is something that car enthusiasts would love a lot. Tesla does not yet produce convertibles. The Tesla Roadster, the automaker’s first automobile, was a convertible, but with Tesla’s current performance, many people have desired a convertible electric car as the new Roadster was still far away.

It prompted a few third-party companies to provide Model S and Model 3 convertible conversions. In a more recent example, the luxury Italian design studio Ares was tasked with converting a Model S convertible and revealed the results.

In order not to weaken the strength of the Model S chassis too much, Ares engineers tried to retain structural integrity by “reinforcing the chassis with additional strengthening to the side members, beneath the cockpit and rear seating area.” The results are quite impressive.

There is reason to believe that a 2-door variant of the Model S would sell well thanks to its sleek exterior and the fact that it boasts serious performance credentials. Musk has not officially said anything about such possibilities, but a more technologically solvent and secure Tesla may attempt something towards that in the future.

Thanks for reading till the end. Comment what’s your opinion about this information “Take A Look Elon Musk Revealed 5 New Tesla Models for 2022“.