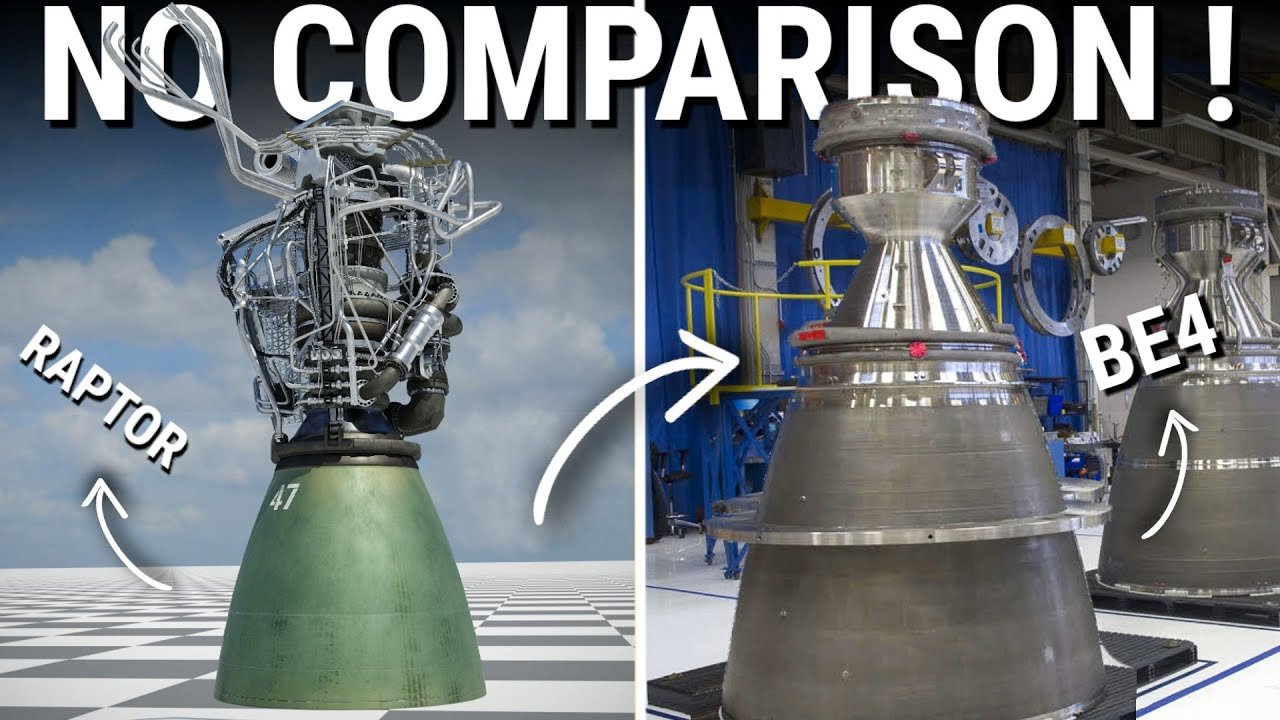 SpaceX Raptor Engine Completely Humiliation Blue Origin BE4 Engine: SpaceX and blue origin have been competing with each other, for many spacecraft and commercial contracts. Both the companies are developing their next-generation rocket, But SpaceX is the leading space company that has made many rocket engines, since its launch in 2002.

A few months ago SpaceX completed its 100th raptor engine, this extraordinary milestone was achieved in just 29 months, a little over two years blue origin’s rocket engine’s development started, work on the be 4 engine since 2011.

Importantly, they said the be4 would be ready for flight by 2017, but at this very moment, blue origin’s powerful be4 engine is more than four years late. The first flight test of the new engine is now expected no earlier than 2022, on the Vulcan rocket, this is a big problem and we need to talk about it. So how did blue origin’s be4 turn into a joke, whereas SpaceX’s raptor is the leading example of the industry? Let’s find out.

First, how has be4 gone through almost a decade of failure, this was their first engine to combust liquid oxygen and liquefied natural gas propellants. It was initially planned for the engine to be used exclusively, on a blue-origin proprietary launch vehicle new Glenn, the company’s first orbital rocket.

However, it was announced in 2014, that the engine would also be used on the united launch alliance, the Vulcan Centaur launch vehicle.

The successor to the atlas v launch vehicle, this was labeled a stunner choice the company planned to begin full-scale engine testing, in late 2016 and expected to complete the development of the engine in 2017.

However, the first engine was not fully assembled until March 2017, also in march united launch alliance indicated that the economic risk of the blue origin engine selection option had been retired. But, the technical risk on the project would remain until a series of engine firing tests, were completed later in 2017.

A test anomaly occurred on the 13th of may 2017, and blue origin reported that they lost a set of powerpack hardware, blue origin be4 rocket engine powerhead and combustion chamber, was the first be4 engine to be hot-fired tested, the test occurred on the 18th of October in 2017.

Finally, in July of 2020, the first pathfinder be4 was delivered to the united launch alliance, for integration testing with the Vulcan centaur in august of 2020. U L A century Bruno stated the second test be4 would be delivered soon, followed quickly by the first flight-qualified ones.

However, he noted an ongoing issue with the be4 turbopumps at the time, blue origin was still troubleshooting the 75 000 horsepower pumps, that brings fuel to the be4’s main combustion chamber.

Bruno said adding that he was confident the issues would be resolved soon, in October Bruno stated that the issue was resolved and that the engine was moved into production. But it wasn’t remarkably by august of 2021, it had become clear even publicly that the be4 engine program was in trouble, delays had been accruing in the program for four years.

Including turbopump problems combustion instability overheating, and shorter than planned engine life, in addition, company management issues have left insufficient hardware to build. Development engines leading to extended periods, where no testing could be done as well as issues related to companies.

C E O bob smith and the distraction of jeff Bezos, himself thus blue origin has had difficulty getting the engines to run successfully, at full power for a full duration burn.

The company recently made the risky decision to ship the flight engines, currently not fully assembled to their customer UNITED LAUNCH ALLIANCE, before they have completed full qualification testing, which delivery may still be early 2022 rather than the earlier promised dates.

The relationship with U L A has deteriorated in part mostly because blue tried to renegotiate for a higher price in 2017 than had been agreed to in 2014. The be4 delayed development has increasingly been the subject of keen interest, this is partly because U L A has been working on its new Vulcan rocket, for a number of years, and that rocket is important to the future of the company.

The military is also eager for this delivery, as U L A is a primary provider of launch services to the department of defense, alongside SpaceX they hope Vulcan provides lower-cost launch services. with engines manufactured in the united states, finally many in the space community are genuinely curious about the cause of the delay, because of the launch services agreement, the u.s military contributed 255.5 million dollars, toward be4 development.

Money that comes from taxpayers, so the public has a right to know despite this widespread interest, however, blue origin has said almost nothing publicly about engine development. But during that time, what has SpaceX done SpaceX first mentioned the term raptor in 2009, but SpaceX only had a few staff working on the raptor upper stage engine.

At a low level of priority, they indicated quickly that details, on a new SpaceX rocket, would be forthcoming in one to three years, and that the large engine was intended for the next-generation launch vehicle.

Using multiple of these large engines, that would be expected to launch payload masses of the order of 150 to 200 tons, which is around 330 to 440 000 pounds to low earth orbit. Exceeding the payload mass capability of the NASA space launch system, then in October of 2013, SpaceX announced that they would be performing methane engine tests of raptor engine.

Components at the john c Stennis space center in Hancock county Mississippi, and that SpaceX would add equipment to the existing test stand, infrastructure to support liquid methane and hot gaseous methane.

Engine component testing in April of 2014, SpaceX completed the required upgrades and maintenance to the Stennis test stand, to prepare for testing of raptor components and the engine component. The testing program began in earnest focusing on the development of a robust startup, and shutdown procedures.

Finally, SpaceX successfully began development testing of injectors in 2014 and completed a full-power test of a full-scale oxygen pre-burner in 2015. 76 hot-fire tests of the pre-burner, totaling some 400 seconds of test time were executed from April to August of 2015.

SpaceX completed its planned testing using NASA’s status facilities in 2014 and 2015. By early 2016, SpaceX had constructed a new engine test stand at their McGregor test site, in central texas for raptor testing by august of 2016.

Testing its first full-flow staged combustion Methylox engine ever, to reach a test stand it performed an initial nine-second firing test, on the 26th of September and 2016. Until now, SpaceX broke ground with a second production facility for raptor engines, and the facility will concentrate on the serial production of raptor 2.

While the California facility will produce raptor vacuum, and new slash experimental raptor designs, the new facility is expected to eventually produce 800 to 1000 rocket engines, each year. Incredibly, Elon musk confirmed that raptor production is approaching one every 48 hours, SpaceX aims at a lifetime of a thousand flights for raptors in 2019.

The marginal cost of the engine was stated to be approaching, one million dollars, SpaceX plans to mass-produce up to 500 raptor engines per year, each costing less than 250 thousand dollars.

No one can deny that blue origin is definitely far behind, this only proves that the be4 is not how it was supposed to be, and no matter how many similarities it has with SpaceX’s raptor, it can’t reach the level of the SpaceX rocket engines.

Thanks for reading till the end. Comment what’s your opinion about this information “SpaceX Raptor Engine Completely Humiliation Blue Origin BE4 Engine“.