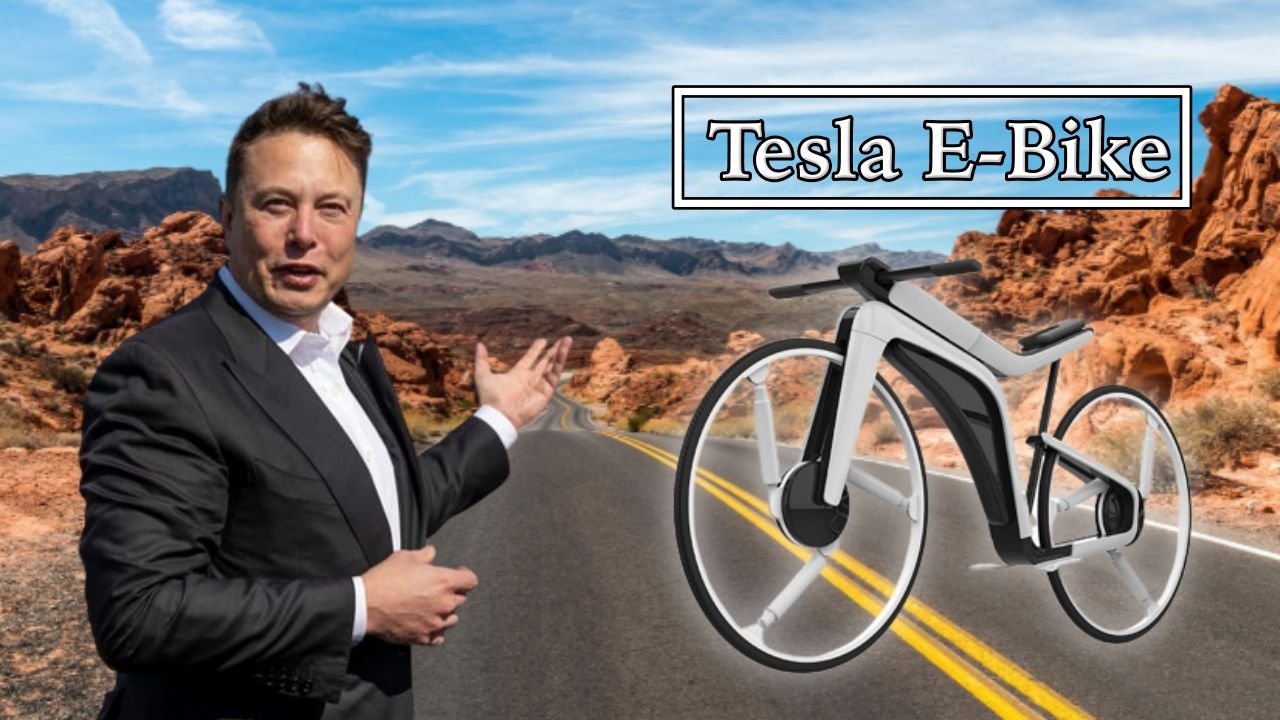 Elon Musk Revealed Tesla’s E-Bike – Model B: Electric propulsion has been catching on big time for a while, and people are coming up with new ways to apply it. If it could be done with cars, why not planes? Well, the sky may still be too high, but what about motorcycles or bicycles? Now we’re on to something.

A motorized bicycle with an integrated electric motor for propulsion is known as an electric bicycle. There are many different types of e-bikes available across the world, but they typically fall into two categories: those that help the rider’s pedal-power and those that have throttle and moped-style capabilities.

Both are not electric motorbikes because they may still be pedaled by the rider. E-bikes have rechargeable batteries and can go up to 32 kilometers per hour (16 to 20 mph). High-powered types may frequently reach speeds greater than 45 km/h (28 mph).

In certain markets, like Germany in 2013, when they started gaining popularity and displacing traditional bicycles, while in others, such as China in 2010, they began displacing motorized scooters. Many e-bikes are categorized as bicycles rather than mopeds or motorbikes, depending on local rules.

This exempts them from the stricter regulations that govern the certification and operation of more powerful two-wheelers, which are commonly referred to as electric motorbikes. E-bikes can potentially be classified as a different category with their own set of legislation. E-bikes are essentially battery-powered variants of motorized bicycles, which have been around since the late 1800s.

E-motorcycles, on the other hand, are electric-propelled versions of full-size motorcycles. This prompts separate regulation and lawmaking for them. In addition to electric motors and some type of control, e-bikes employ rechargeable batteries.

The cost of operating an e-bike is low in terms of energy, but battery replacement can be costly. A battery pack’s lifespan varies depending on how it is used. Shallow discharge/recharge cycles will help the battery last longer. Model B?

The internet was abuzz with rumors about a new Tesla e-bike design set to debut in late 2020, featuring a futuristic silhouette with electronic steering, autopilot technology, and a novel suspension system. First and foremost, it’s more of a moped than an e-bike (it has no pedals).

The second reason is that it isn’t from Tesla. Kendall Toerner, the designer, is not affiliated with the firm; he just utilized its name and emblem to accompany the mock-ups. Nonetheless, it’s worth discussing.

The Model B has a sleek frame design with front, side-facing, and rear proximity LiDAR sensors that scan the environment and create a “protective bubble” around the rider, alerting them to any potential hazards.

Furthermore, each wheel has its own dedicated motor, producing the Model B’s dual-drive system, and the spokes on the wheels have been replaced with shock-absorbers, assuring a smooth ride.

The Model B’s frame also has foldout footrests and handlebars that don’t spin separately but instead detect force, allowing the user to turn by simply providing more force to one side of the bike while the front wheel moves independently based on applied force.

The bike also has its own autopilot capability, which allows the built-in AI system to take control and securely steer the bike using several sensors on its frame. There’s also a sleek integrated dashboard that goes flush within the bike’s frame and displays route stats alongside navigation maps for the rider to view.

As previously said, the Model B e-bike is currently only a concept, with no information on cost or availability. On the other hand, Elon Musk’s followers and proponents of clean micro-mobility are certainly hoping for its manufacturing.

Although e-bikes are zero-emission vehicles since they produce no combustion by-products, the environmental implications of energy generation and distribution and the manufacture and recycling of batteries must be considered.

Even with these drawbacks, e-bikes have a smaller environmental effect than vehicles and are typically seen as more ecologically friendly in urban areas. According to recent research in England, e-bikes have the potential to “reduce automotive carbon dioxide (CO2) emissions in England by up to 50% (about 30 million tonnes per year) if utilized to substitute car travel.”

Thus, Model B sounds perfect, right? The Model B’s Issues Toerner’s “Model B” is a wonderful piece of industrial design that raises some interesting questions concerning dashboards and sensor technology.

However, it is physically impossible to carry out. The handlebars don’t move, but when you press down on them, sensors detect the force and inform the fork (which is still attached to an articulating column) to turn in the desired direction.

Riders would need to relearn how to steer as a result. There’s also a mention of autopilot, which is paradoxical given how important balance is when riding. You will tumble if the rig abruptly shifts course without warning.

Cycling is a lasting metaphor of things that become second nature after you learn them, which is paradoxical. It’s just like riding a bike, as the cliché says. Except it isn’t in this situation. The insertion of a silicon chip into a perfectly working piece of analog technology ruins it. It’s not uncommon to see concept motorcycles that are completely impractical.

Alex Pong of Cannondale invented a now-famous carbon-fiber monster that replaced a road bike’s front wheel with an enclosed inline skate in the mid-1990s. The objective was to eliminate one of the most significant sources of aerodynamic drag (the front wheel).

Cannondale deserves credit for actually developing a working prototype rather than merely creating a CAD model. The little inline wheels, however, were hard to balance on, as everyone who tried to ride it learned. It was a dead end as a problem solution. That isn’t to imply idea designs aren’t valuable.

Another of Pong’s wacky mid-nineties innovations was a mountain bike with a mono-blade suspension fork, which Cannondale quickly adapted into the Lefty. Specialized’s headquarters in Morgan Hill, California, is a true collection of one-of-a-kind bikes designed by Robert Egger, the company’s long-standing creative director.

They’re all insane in their own way, but many of them can be traced back to genuine goods, such as his Renegade FSR drop-bar suspension bike, which inspired the Diverge and Roubaix lines’ Future Shock system. There are several positive aspects to the Model B.

It’s understandable that pothole-sensing or stability-assistance technologies might pique one’s interest. In addition, the general appearance is rather nice. Cars are seen as status symbols by considerably more people than bicycles, as Toerner pointed out in his presentation.

Beautiful city e-bikes might help to alter that. Concepts exist to elicit discussion and thought. Egger occasionally utilizes his art to express a statement, like the FUCI road bike, which contained every single technology that the Union Cycliste Internationale has outlawed.

They should also communicate concepts that technology cannot yet achieve as this advances technology. Tesla could consider other configurations and designs when it comes to making an e-bike. Some e-bikes, such as the Cytronex bicycles, which use a tiny battery disguised as a water bottle, are not ordinary push-bikes with an integrated motor.

Some are meant to seem like low-capacity bikes but are smaller in size and have an electric motor instead of a gasoline engine. The Sakura e-bike, for example, has a 200 W motor, as well as plastic cladding, front and rear lights, and a speedometer, which are all regular features on e-bikes.

It’s designed to look like a contemporary moped and is frequently mistaken for one. An e-bike design that puts a motor and batteries into a trailer that propels any bicycle is known as an Electric Pusher Trailer.

The two-wheeled Ridekick is one such trailer. Other, more unusual designs include a ‘chopper’ styled e-bike, which is designed as a ‘fun’ or ‘novelty’ e-bike rather than functional mobility assistance or form of transportation.

Electric cargo bikes enable riders to move huge, heavy things that would be impossible to transport without the assistance of electric power. There are a variety of e-bike designs available, some with batteries mounted to the frame and others with batteries placed within the tube.

Various designs (including those listed above) are intended to comply with most local ordinances, and those with pedals can be used on roads in the United Kingdom and other nations. Finally, foldable e-bikes are also available.

The environmental credentials of e-bikes, and electric / human-powered hybrids in general, have prompted several local authorities to adopt them, such as Little Rock, Arkansas’ Wavecrest electric power-assisted bicycles, and Cloverdale, California’s Zap e-bikes.

China’s e-bike producers, such as Xinri, are now collaborating with universities to develop their technology and bring it in line with international environmental regulations. This effort is sponsored by the Chinese government, which wants to boost the export potential of Chinese-made e-bikes.

Thanks for reading till the end. Comment what’s your opinion about this Tesla E-Bike.