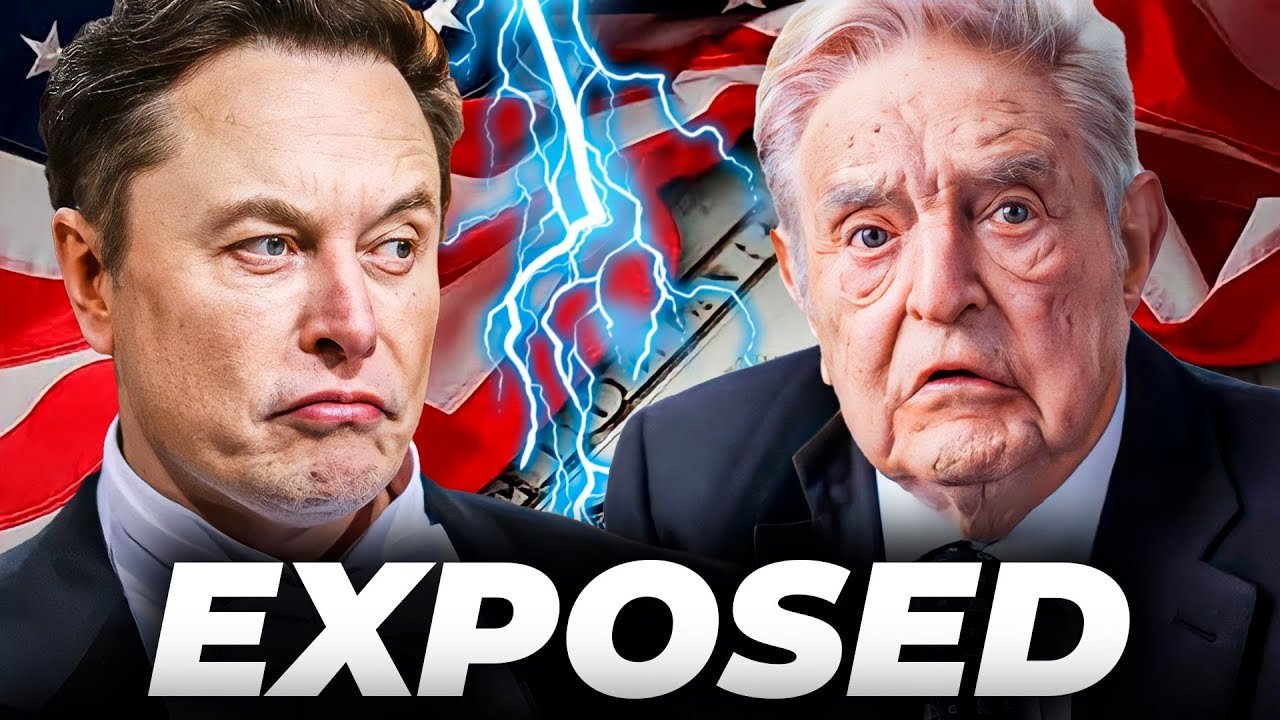 Elon Musk Finally Exposed George Soros:- Elon Musk finally exposed George Soros. The sunlight is the best disinfectant Elon Musk said while revealing his plans to unmask a scheme to thwart his Twitter takeover bid. Which according to the billionaire is underhanded by prominent individuals and organizations.

So who are the individuals against Elon Musk’s Twitter takeover who are supposedly funding them? And are their actions just. Since Elon Musk may public his intentions of purchasing Twitter, there have been growing fears in many over ethical issues more so in the content shared on the platform.

As a believer in free speech, Elon Musk made his intentions public that no utterances made on the platform should be bounded. In fact, he wants to bring changes and new features to enhance the platform.

In a tweet, he dropped a hint of one of the anticipated changes which is a slight fee for commercial and government users to boost their social media platforms’ reach. Hinting that Twitter was providing certain services for free which it could have been commercialized.

In another tweet, “he said Twitter will always be free for casual users”. Musk hasn’t had much to say about how he’ll run Twitter. But here on the points of free speech he’s been the clearest.

Twitter should allow more speech. In his own words, he said. I hope that even my worst critics remain on Twitter because that’s what free speech means. In an earlier tweet, he characterized himself as a free speech absolutist. And went on to clarify the statement by saying “by free speech I simply mean that which matches the law”.

But his new policies have been met with the loudest outcry voices across America. According to a report by the CNN group of 25 left-wing advocacy groups have written a letter to the biggest brands including Coca-Cola, CCEP, Disney, DIS, and Craft KHC.

Asking them to make sure advertising deals made with Twitter are contingent. That will keep in place policies to police hateful conduct, and transparency, and enforce civic integrity or risk losing advertising dollars.

According to the letter which addresses business corporations and major brands using Twitter. Elon Musk’s take over Twitter will further toxify information ecosystems. And be a direct threat to public safety, especially among those already most vulnerable and marginalized.

It warned that the advertising on Twitter would see their company risk associated with a platform amplifying hate, extremism, health misinformation, and conspiracy theories. The authors continue.

Under Musk’s management, Twitter risks becoming a cesspool of misinformation. With your brand attached polluting our information ecosystem in a time where trust in institutions and news media is already at an all-time low.

Your ad dollars can either fund Musk’s vanity project or hold him to account. We call on you to demand Musk uphold these basic standards of community trust and safety and to pull your advertising spending from Twitter if they are not.

The letter went on to state that the basics of non-negotiable standards short of which the business corporation and brands must boycott the platform. This is what it said. Keep accounts including those of public figures and politicians that were removed for egregious violations of Twitter rules such as harassment, violence, and hateful conduct off the platform. And continue to enforce the civic integrity policy along with the hateful conduct policy.

A reversal of Twitter’s content moderation policies including its recent climate commitments. Its protections for transgender people and its restrictions on other forms of hate, harassment, and violence.

Would be toxic not just for those targeted but also for businesses advertising on the platform. Beyond algorithmic transparency ensure algorithmic accountability. Preserve people’s privacy and commit to depolarizing the algorithm.

Consider the implications of full-scale public visibility into Twitter’s algorithm and put protections in place to prevent bad actors from gaming the system. Listen to privacy experts and others whose expertise includes protecting communities that are discriminated against and speaking truth to power.

Continue Twitter’s commitment to transparency and researcher access. And to give some kind of strength and power to the letter it concluded with signatories of twenty-six companies, including Access Now Accountable Tech Black Lives Matter Global Network Foundation.

In response to this letter, Elon Musk has called for an investigation into these advocacy groups demanding to know who is behind the letter signed by more than two dozen liberal groups. That urges advertisers to boycott Twitter if he completes his takeover of the social media giant.

On Twitter, Musk queries, who funds these organizations that want to control your access to information. Let’s investigate.

Adding that the sunlight is the best disinfectant. Then Musk went on to share an article by Daily Mail that has been widely read. It first revealed the people behind the 26 groups. The George Soros, Clinton, and Obama staffers and European governments are behind the anti-Musk campaign that urged big corporations to boycott Twitter.

One of the groups accountable tech is a Washington DC-based led by Nicole Gill, a political campaigner and founder of the 2017 tax march. And Jesse LaRich, a former foreign policy spokesman for Hillary Clinton’s campaign and the nephew of David Axelrod, former senior advisor to Barack Obama.

Another called Media Matters for America began in May 2004 by David Brock. A former conservative journalist who turned liberal in 2017 was described by Politico as the Democrat’s attack dog.

The ultraviolet group is backed by numerous family foundations including that founded by Warren Buffett’s son Peter, Novo Foundation. The Access Now Group has its largest donor in the Swedish Government’s Development Agency Sita followed by Soros Open Society Foundations.

The article also revealed that the governments of Denmark, Germany, Netherlands, and Canada have contributed large amounts to these groups. On the morning after these revelations Elon Musk tweeted interesting I wonder if those funding these organizations are fully aware of what the organizations are doing.

Then Twitter’s chief threw a suspicious eye on Soros asking him to slide into his DMs. But it’s not a secret that the chief financer of these organizations is the Hungarian American businessman George Soros.

In fact two such advocacy groups Free Press and Media Matters for America have received funding from the Hungarian American George Soros Open Society Foundation. The billionaire financier who has donated to several liberal causes has not only had issues with Twitter.

In his own word, the billionaire investor and philanthropist George Soros added they have become a menace and their days are numbered. But George Soros’s recent hostility to Twitter has grown beyond bounds.

By funding his organizations and others he has attempted to exercise some kind of control to supposedly bring the new Twitter management to soberness. He has not been alone.

Open markets also believe the deal violates existing law and that the Federal Communications Commission or FCC the Department of Justice DOJ and the Federal Trade Commission FDC have ample authority to block it.

The most obvious problem is that the deal would give to a single man one who already wields immense political and economic power direct control over one of the world’s most important platforms for public communications and debate as has been true from the founding of the American people have an absolute right to ensure the full openness and neutrality of all essential public infrastructure.

But Republican FCC commissioner Brandon Carr is contrary to Barry Lynn’s statement. He says that the FCC has no authority to block Elon Musk’s purchase of Twitter and who suggests otherwise is absurd. But as for this quantum fund director George Soros, there was not always bitterness with Elon Musk.

In fact, this man Soros was once a shareholder in Tesla. He threw his support behind Tesla Inc’s TSLA bonds when they were being heavily sorted.

The billionaire’s investment firm Soros Fund Management LLC took a $35 million dollar stake in the electric automakers’ convertible bonds in the first three months of 2018, according to SEC filings the bonds which can be converted into a predetermined number of common shares giving investors the ability to choose between profiting from stock price changes or earning a steadily fixed income yield expired on March 2019.

Musk who likes Soros and is also a billionaire has been under pressure from investors to prove the company can solve production problems. STEM senior staff departures and resolve questions about crashes involving its electric cars.

At one time, Tesla’s bonds came under heavy selling pressure. Investors worried that delays in manufacturing the electric automakers model three sedans would lead the company to run out of cash.

A bet against the bonds pushed the cost of opening up new positions shorting Tesla’s debt to an all-time high. Concerns that Tesla could go broke were also fueled by several crashes involving its autopilot technology. And an exodus of high-profile staff. But the company was relieved by the Titan entrepreneur George Soros.

Later that year Tesla acquired the solar panel firm for $2. 6 billion dollars. Soros also held Tesla stock although according to Reuters he sold off his stock last year But with his recent flare-up it could be that he was not happy with the profits he had received when he had invested in Tesla.

It could be that he had received less than his right due. Plus the fact that he is by default left-wing the free speech policy by Elon Musk settles him at the crossroads with the Twitter owner. Musk’s forty-four billion-dollar Twitter deal was consummated early this year.

It is now left to the new management under Elon Musk to prove that free speech is not harmful. As it has been feared by his who claim it is a direct threat to democracy and time will tell who is right and who is wrong.

Thanks for reading till the end. Comment what’s your opinion about this information “Elon Musk Finally Exposed George Soros“.