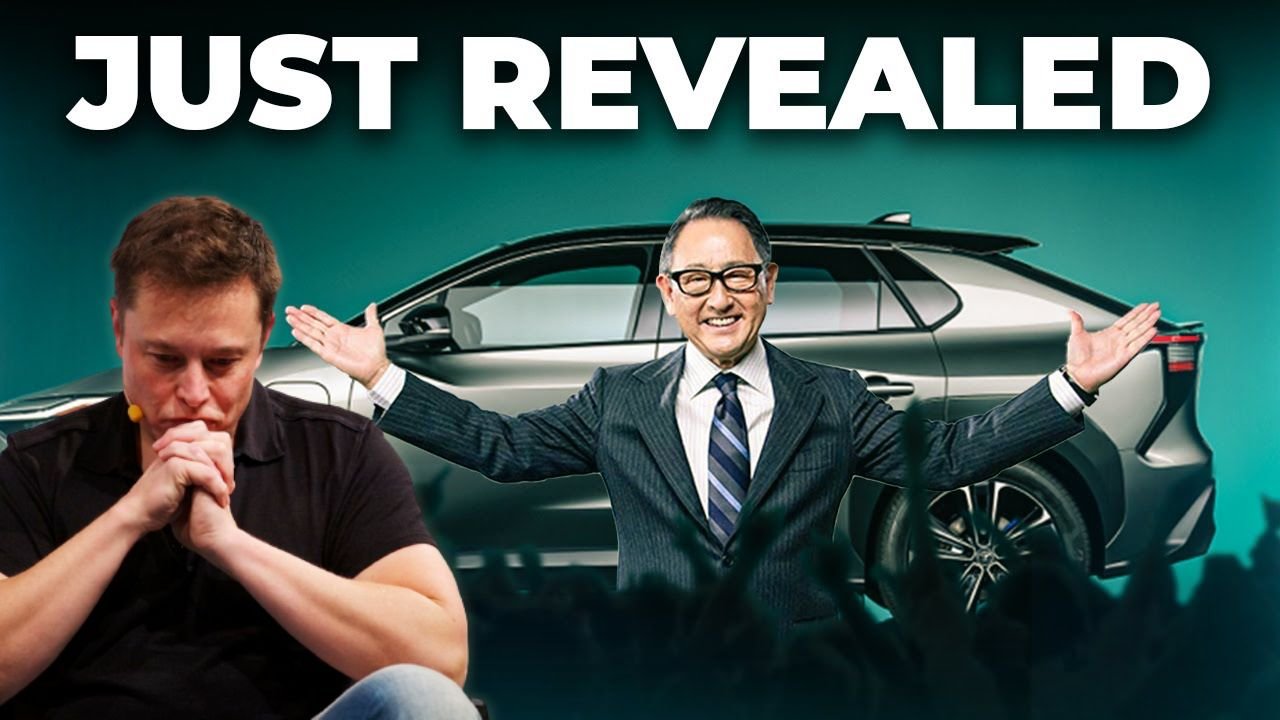 Elon Musk FEARS Toyota’s New Bz4X Model – This Is Why:- Electric vehicles seem to be the future of the automotive industry right now. But before now, electric vehicles were overweight and slow due to the low energy densities of batteries.

Thanks to advancements in technology and innovations from Tesla and its CEO, Elon Musk, that perception of EVs has changed. Tesla is the leading company in the EV industry, and it looks like it’s going to hold that position for quite a long while. But that is a talk for another day.

Toyota, a company that has not shown any interest in manufacturing an electric vehicle, has shocked the car industry with its Bz4X SUV. This car is sophisticated and outstanding. How outstanding is the Toyota Bz4X SUV? Let’s see if it even shares any similarity with any Tesla car.

Toyota has been doing everything possible lately to get into the electric vehicle market. And the plan right now is to manufacture a dozen EVs or more for the next few years. But the first one, the Bz4X SUV, is already here.

Toyota is one of the numerous traditional automakers that have made a smart move by transitioning to electric vehicles. It has two brands, Toyota and Lexus, which are among the most reliable worldwide.

The Japanese automobile powerhouse has built up a decent lead with its Prius hybrid, which should have been a natural precursor to its purely electric vehicle. Toyota recorded more than 15 million sales for the Prius hybrid, cementing the model’s iconic status.

When the Lexus brand was accounted for, Toyota at one time had 44 hybrids on the market. It calculated it had prevented more than 120 million tonnes of dangerous emissions from polluting the environment.

However, several bad decisions and uncommitted leadership are behind the point where Toyota is presently in the world of electric vehicles. The company decided to focus on hydrogen fuel cells to the detriment of EVs.

The company reconsidered its moves and began showing interest and signs of getting back to the EV track earlier this year with the shocking announcement that it would turn on the fire hose by launching 70 alternatively fueled vehicles globally by 2025.

Even for a company as large as Toyota, it was a sort of bold step. Fifteen of the lot would be purely electric, and seven would come under the BZ brand. BZ means Beyond Zero. Toyota unveiled a concept SUV, the Bz4X, which has developed into an actual product.

This follows a similar pattern as the Volkswagen ID Buzz, which also started life as a funky retro minivan, but has graduated into an upcoming product. Now that the Bz4X is here, will it attract buyers? The Bz4X comes at a time when competition in the EV industry is extremely intense.

New entrants like Tesla, Rivian, and Lucid are carving market share for themselves with excellent EVs like the Model 3, SA1T electric pickup truck, and the Lucid Air Dream Edition, which has the longest range ever in a production electric car.

Also, the old brands like Volkswagen, Ford, and Mercedes-Benz are flexing muscles with pumped-up cars like the ID 4, Mustang, Mach E, and the EQS. They already know how crowded the market is, but Toyota has come out swinging with a feature-packed SUV for its first electric model.

The Bz4X is the first absolute electric model to use a platform entirely developed for battery-electric vehicles. It is based on the eTNGA platform. It was built in conjunction with Subaru, in which Toyota has a small investment. TNGA stands for Toyota New Global Architecture.

The collaboration of Toyota and Subaru makes lots of sense design-wise. It enables the Bz4X to pick up Toyota’s legendary quality, durability, and reliability while benefiting from Subaru’s all-wheel-drive expertise. The eTNGA is a breakthrough for Toyota because of its highly customizable nature.

Many of its features could be altered to fit the type of vehicle that is being built on it. For example, the platform can handle different wheelbase sizes, overhangs, variable numbers of batteries, and the like.

This means – Toyota can manufacture 2 motor power trains with all-wheel drive or a single motor with either rear or front-wheel drive. Therefore, using a single platform, Toyota can build the larger cars American drivers prefer and the smaller cars that are in demand in Europe.

One of the vital benefits of this eTNGA platform is that building EVs has become faster and costs less, as most of the research and development work has been done already. Outside, the Bz4X has retained most of the looks of the concept car.

The aggressive styling that has been characteristic of Toyota’s recent models is there with sharp, well-defined edges. Now inspecting the Bz4X, Toyota has revealed it is not above courting controversy or lifting features from other automobile makers.

For example, the Bz4X features a yoke in the place of a steering wheel Ala Tesla’s Model S. The butterfly-shaped yoke enables drivers in the Bz4X to see the dashboard better as the top part does not obstruct the steering wheel.

For drivers who scare easily, it will be awkward, making turns harder when they have to grip and regrip the yoke, the special feature of the Bz4X’s steering system erases the fear. Unlike the yoke in the Tesla Model S, the Bz4X’s yoke is not connected to the front wheels mechanically.

Toyota applies software to tell the tires how much to turn. This feature is known as steer-by-wire; the yoke can’t turn more than 150 degrees. Also, Tesla is working on a steer by wire system but apparently couldn’t get it to ship with the refreshed Model S.

Think of the system as the bicycle’s handlebar that you can turn without having to regrip. The yoke steer by wire combination makes the Bz4X easy to steer in tight corners. In addition, vibrations from the tires do not affect the yoke due to the lack of connection between them.

The yoke makes it easier to get into and out of the driver’s seat and creates more legroom while driving. The Bz4X will even let you change the steering characteristics with drive mode selection. So, for now, the yoke in the Bz4X is better at low speeds than the one in the Model S.

Toyota, however, is willing to compromise. Because it will sell a version of the BZ4X with the popular steering wheel. Unlike Tesla’s yoke, the BZ4X has physical buttons on both the yoke and the steering wheels to access settings. You’ll find more buttons on the Touch Screen Center Console 2.

The BZ4X has a 71.4 kWh battery pack which will yield a cruising range per charge of 500 kilometers or 310 miles. According to WLTC standards for the front wheel version, the all-wheel drive sacrifices about 40 kilometers.

Only a few other EVs have this feature. The Bz4X has an optional solar roof that can harvest the sunlight and convert it into energy in the battery. You can gain 1800 kilometers of extra driving range per year with the secondary power source. Moreover, the BZ4X can do bidirectional charging.

This means it can send out power from the battery, which can charge another car, power electronics or even supply power to your home. Are you not stunned to know this? Speaking of batteries, Toyota is not joking with its battery supply at all; its busy ambitions depend on it.

The company is committed to spending $13.6 billion on battery supply systems and R&D on EV battery tech by 2030. Toyota plans to cut the cost of its battery by 30%.

A significant amount because its spare battery is the biggest in the bill of materials for electric vehicles, but that is not at all the improvement Toyota will make to its batteries. It will also improve power consumption, which is the amount of electricity used per kilometer, by 30%.

The first electric vehicle to benefit from these changes is the BZ4X. Toyota is also working on solid-state batteries that increase energy density and enable faster charging and safer battery operation.

The company remains optimistic about getting its solid-state battery ready by 2025 when it starts powering production vehicles. The goal of Toyota is to achieve carbon neutrality by 2050.

As it uses its electrified lineup to get there. Working with batteries is nothing new to Toyota, which has thousands of patents after selling millions of hybrid cars. Some other features of the Toyota BZ4X SUV include high soundproofing glass and a wind noise reduction that ensures quietness and clear conversation while driving.

There are also unwilling heaters in the front seat radiant for two-foot heating to keep your lower extremities toasty during cold weather. This feature is a first for Toyota. Toyota has also promised over-the-air updates to make the BZ4X always better.

Unlike the battery electric vehicle that Toyota has offered in the past in China alone. The BZ4X will be sold globally – starting in Japan. For American buyers, Toyota will have to disclose information regarding the date later.

Thanks for reading till the end. Comment what’s your opinion about this information “Toyota Launching The bZ4X – But Can It Take on Tesla“.