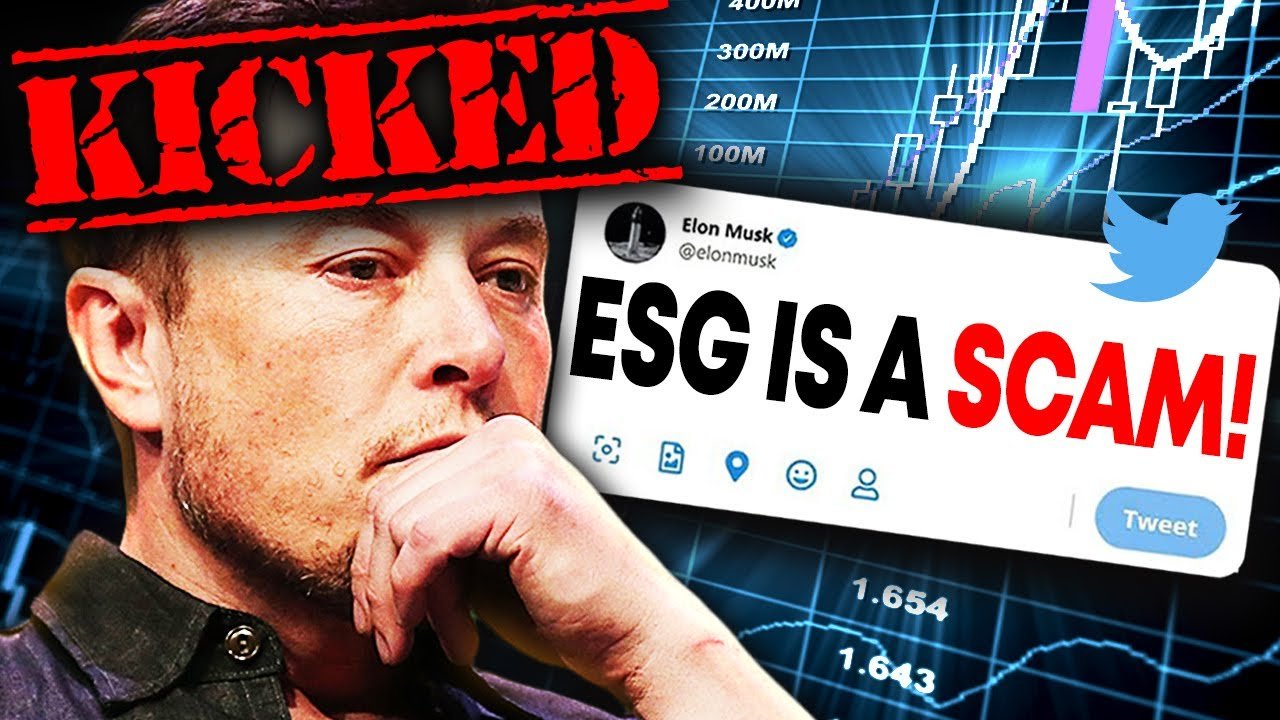 Elon Musk JUST Got KICKED OUT Of ESG: On May 18, a top executive from the S&P Dow Jones revealed that Tesla had been removed from the S&P 500 ESG Index.

This mystery executive cited some of Tesla’s woes as the reason for the removal, explicitly mentioning the lack of disclosure, racial discrimination (0.00 to 0.16), and the company failing to meet ESG criteria.

Elon Musk has responded to this removal with a fury of tweets, calling the ESG a scam. “Exxon is rated top ten best in world for environment, social & governance (ESG) by S&P 500, while Tesla didn’t make the list! ESG is a scam. It has been weaponized by phony social justice warriors.” The people in power are not happy about how much influence Elon Musk has on the world, and they would do anything to stop him.

Elon Musk JUST Got KICKED OUT Of ESG

S&P’s Integrity Down Bad Tesla produces electric cars and promotes the use of sustainable energy through the myriad of products it has. But for some reason, ExxonMobil, a publicly traded oil and gas company that does the opposite of what Tesla does, sits right on top of the S&P 500 ESG index while Tesla gets kicked out.

ESG stands for Environmental, Social, and Governance. The index is managed by S&P Global, and they have a list of requirements that a company needs to fulfill before it gets added to the index.

With the removal of the largest electric automotive manufacturer from the index, S&P Global has just thrown its integrity out of the window. Musk confirmed this in a tweet, “.@SPGlobalRatings has lost their integrity.”

In changes that took effect on the 2nd of May, Tesla was ousted from the index, while Twitter Incorporation, soon-to-be-controlled by Elon Musk and oil refiner Phillips 66, was added to the index.

These changes have brought a debate about the metrics used to judge corporate performance on ESG issues, an area raking in many investors. Investors concerned about issues like climate change and diversity use the S&P 500 ESG Index criteria to pick stocks and have poured billions of dollars into funds.

There has been a debate about whether these funds from investors push the change they seek or push companies too much about issues that should be settled with government policy.

Musk and some other individuals have complained that the S&P Dow Jones, majority-owned by S & P Global Incorporation, conflates too many issues by bundling ESG concerns into a single score.

Their argument is that the ESG score accorded to companies is an inaccurate medium of measurement and favors some parties instead of being fair and square.

The Reason Behind Tesla’s Removal

Musk went insane when Tesla lost its spot on the widely followed S&P 500 ESG Index. Tesla is the most valuable automotive company in the EV industry and the auto world combined. It doesn’t just create EVs. It has expanded its horizon of products to battery storage for electric grids and solar-powered systems.

Still, she went on to say this about Tesla, “Its other issues and lack of disclosures relative to industry peers should raise concerns for investors looking to judge the company across environmental, social, and governance (ESG) criteria.”

In a blog post that reviewed the changes from April 22nd, Margaret Dorn mentioned that the Index aims to keep the industries weighted the same as they are in the regular S & P 500 Index while enhancing the overall sustainability profile of the index.

This means that it can keep oil companies while leaving out the big companies like Meta, Facebook’s parent platform, and Wells Fargo & Co. Dorn also mentioned that Tesla’s ESG score has dropped from the 22 it received last year. In contrast, the scores of other automotive manufacturers improved.

Tesla was pushed out of the ESG Index because of its rule against including the lowest-quartile performers. While Dorn had a reason for pushing Tesla out, she couldn’t explain why Twitter or the oil refining company Phillips 66 were added to the index.

The Controversy Of Tesla’s Autopilot

On August 16, 2021, U.S. auto safety regulators opened a formal safety probe into Tesla’s driver assistance system, Autopilot. While Tesla cars help to reduce carbon emissions on the road, they have been involved in accidents that have claimed the lives of at least ten people since 2016.

These accidents are caused by a fatal flaw in Tesla’s Autopilot system. From January 2018 to 2021, NHTSA said at least 11 crashes involving Tesla cars and emergency vehicles have been identified. In 2017, the safety agency carried out an investigation and closed it without taking action.

The autopilot system allows drivers to take their hands off the wheel of their Tesla cars for extended periods. NHTSA has come under fire for not ensuring the system’s safety. Elon Musk has defended the autopilot system in one of the reported crashes. As seen from the data logs, the billionaire CEO pointed out that autopilot was not enabled on the car.

The NHTSA said that in the 11 crashes that resulted in 17 injuries and one fatality, all the cars were engaged in either autopilot or traffic-aware cruise control. The safety agency mentioned that most of the crashes took place after dark, and the crash scenes included measures like road cones, emergency vehicle lights, and flares.

Tesla’s director of autonomous driving technology, Andrej Karpathy, identified a problem with Tesla’s Autopilot system in 2020. He mentioned in a conference that the autopilot has difficulties recognizing when a parked police car has its emergency flashing lights turned on.

He went on to say that “This is an example of a new task we would like to know about.” Musk rejected claims about autopilot being blamed for these crashes.

After one of the crashes involving a Tesla Model S in Texas, a County Precinct Constable told multiple media outlets, including The Wall Street Journal and consumer reports, that investigators were 99.9% sure that no one was behind the wheel when the vehicle crashed.

The board of NHTSA has also criticized Tesla for its lack of safety safeguards. The chairman of the board, Jennifer Homendy, was happy about the probe. She said that the board has urged the NHTSA to develop standards for drive monitoring systems and require automakers to “incorporate system safeguards that limit the use of automated vehicle control systems to those conditions for which they were designed.”

While the safety boards and agencies have tried to pin this autopilot incident on Tesla’s autopilot, it seems to be more of a people problem. NHTSA stated that “no commercially available motor vehicles today are capable of driving themselves,” and it has asked drivers to use them correctly and responsibly.

Tesla is being punished for these crashes, which have been cited as to why it was removed from the S&P 500 ESG Index. Margaret Dorn has mentioned that Tesla’s lack of published details regarding its low carbon strategy or business conduct codes is also a factor.

On February 10, California State’s Department of Fair Employment and Housing (DFEH) sued Tesla over allegations by some workers. The workers stated that Tesla was tolerating racial discrimination at one of its assembly plants.

This lawsuit adds to claims made in several other lawsuits made against the electric carmaker. These workers have referred to Tesla’s factory as the plantation or the slave ship.

The lawsuit, which Tesla said it was expecting, tagging it as misguided, is one of the major reasons its ESG score took a dive, kicking it out of the ESG index. The lawsuit was filed against Tesla’s factory in Fremont, California. Black workers claimed that this factory is racially segregated, and black workers are subjected to racist slurs and drawings from co-workers and managers.

The lawsuit also said that black workers were assigned the most physically demanding and low-paying jobs. Black workers are segregated in areas of the factory known as the black side and are hardly promoted to managerial positions.

Terry Wiley, Chief Assistant District Attorney of Alameda County, mentions that it is rare to see a government agency file a lawsuit against a Fortune 500 company for discrimination. Tesla did not respond to the request for comment.

On February 9, a day before the lawsuit, it mentioned in a blog post that the California Department of Fair Employment and Housing intends to file a lawsuit against it, alleging systematic racial discrimination and harassment. The lawsuit is focused on events that took place between 2015 and 2019.

Tesla mentioned that despite several requests, the regulator didn’t provide it with the specific allegations or the factual bases for the lawsuit. The company has also said that it will ask the court to pause the case as soon as the state’s civil rights regulator files its lawsuit.

Tesla executives pointed out that the department has investigated it in the past due to claims by employees who believed they were being discriminated against or harassed. Still, there wasn’t any misconduct to be found.

The DFEH concluded that almost 50 individual discrimination complaints have been made against Tesla in the past five years. However, Tesla says that all these complaints lacked merit, thereby contracting the state department’s claims of widespread discrimination.

Tesla mentioned that it doesn’t tolerate harassment and has disciplined or fired workers involved in such misconduct. However, last year, a Black contract worker won a jury award of $137 million concerning workplace racism in Tesla.

Tesla claims that this lawsuit is a narrative spun by the state department and a handful of plaintiff firms to generate publicity and not factual proof. As Tesla has grown to become the world’s most valuable automaker, these claims about pervasive racial and sexual harassment at its flagship Fremont factory and other facilities have only increased.

In recent years, Tesla has denied any wrongdoing and said it has implemented several policies to punish and prevent racist conduct. The DFEH’s lawsuit will cover many Tesla employees because many have signed to bring legal claims in arbitration instead of court.

Since the state’s department is not bound by this agreement, these workers will get their day in court. Tesla might have a problem in its hands. The DFEH has pointed out that its human resource department is understaffed and inadequately trained.

As of 2020, Tesla had one human resource professional for 740 employees. The penalties for these kinds of lawsuits can be very significant. Tesla is in for a rough ride beyond just an exit from the S & P 500 ESG Index.

Amid all this ruckus, Tesla faces difficulties in China, crippling supply shortages, and the rising cost of raw materials used in production. Its stocks have seen a 14% drop in a single week. Musk maintains that ESG investing is an outrageous scam, and Tesla’s values and core missions haven’t changed.

1 thought on “Elon Musk JUST Got KICKED OUT Of ESG”