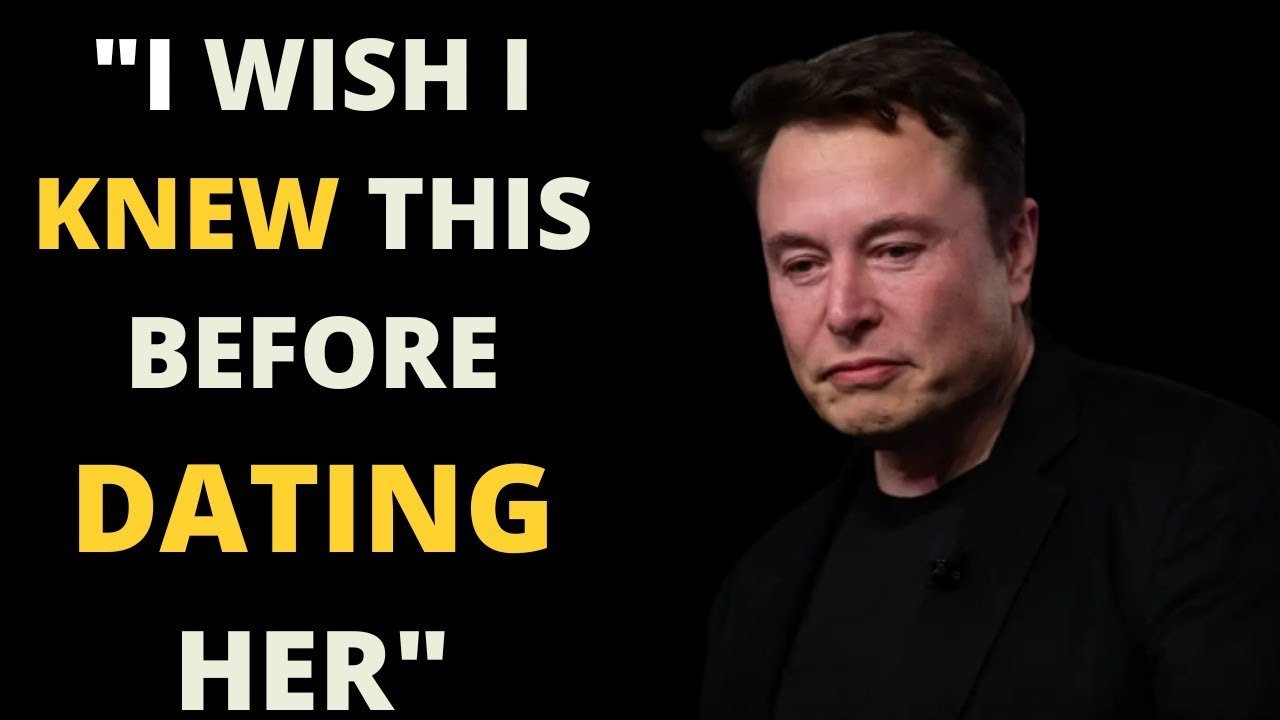 I wish I knew this before dating her: Elon Musk once stated that he would “rather stick a fork in his hand than write about his personal life” in 2010. However, Elon Musk, the CEO of Tesla and SpaceX, is a fascinating figure who has opened up about his childhood, parents, and relationships on a few occasions over the years.

In an in-depth Rolling Stone interview by Neil Strauss, published in November 2017, Musk got uncharacteristically candid for perhaps the first time.

He expressed his heartbreak over his breakup with his ex-girlfriend, as well as his strained relationship with his father, Errol, whom he described as a “terrible human being.” So what did Musk reveal about his love life?

There appears to be nothing Elon Musk can’t accomplish. Musk appears to be everywhere at once, pushing all kinds of futuristic technologies as CEO of SpaceX and Tesla, founder of The Boring Company, and cofounder of OpenAI and Neuralink.

He has stated that he will not be satisfied until we have escaped Earth and colonized Mars. Musk is basically a real-life Tony Stark, thanks to his space rockets, electric cars, solar batteries, and the billions he’s made along the way, which is why he was the inspiration for Marvel’s 2008 “Iron Man” film.

Musk, on the other hand, hasn’t always had it easy. Musk’s childhood was far from idyllic. Musk was also bullied a lot in school. His classmates shoved him down a stairwell made of concrete. He was beaten so badly in one instance that he had to go to the hospital.

Musk moved in with his father soon after his parents separated in 1980. Musk, on the other hand, has a strained relationship with his father, Errol. According to the Tesla CEO, his father is a “terrible human being,” who has committed “nearly every crime you can imagine.”

When it comes to Musk’s relationship history it’s almost as confusing as his ventures into space. Elon Musk’s first wife, Justine Wilson, married the tech mogul in 2000.

The couple’s first child, Nevada Alexander Musk, was born in 2002 but died at the age of ten weeks due to Sudden Infant Death Syndrome. The couple did, however, have five children together.

Elon and Justine divorced in 2008. Following that, actress Talulah Riley became engaged to billionaire Elon Musk six weeks after he filed for divorce from Justine, and they married in 2010. In 2014, the couple went through a rough patch when Elon requested that they divorce for the first time.

Riley filed for divorce in 2016, 18 months after the couple had reconciled and remarried. Musk then moved on to Amber Heard, whom he started dating in late 2016, shortly after her divorce from Johnny Depp.

However, their relationship didn’t last, and in April 2018, Musk began dating musician Grimes, just a month before the couple made their Met Gala red carpet debut. The couple did have two children together, before separating in 2021.

Since the exact dates of their relationship’s start are unknown, Johnny’s legal team is however claiming that Amber cheated on him with Elon. Musk, on the other hand, confirmed in a statement that his relationship with Amber was unrelated to her marriage to Johnny.

During their time together, Heard and Musk may have appeared to be in love. However, recent trial revelations suggest otherwise. For instance, it appears that Heard and Musk only decided to date after seeing each other at the 2016 Met Ball gala.

Moreover, Heard’s text messages with her former agent, Christian Carino, revealed that she never had true feelings for her billionaire ex. “You weren’t in love with him, and you told me a thousand times you were just filling space,” Carino reportedly told the actress when she complained about the media’s coverage of her breakup with Musk.

In response, Heard admitted, “I know.” “However, I needed time to grieve and recover on my own.” While Heard’s relationship with Musk wasn’t exactly real, Musk has made it clear that his feelings for her were genuine. He also admitted that their breakup was close to breaking him.

During a 2017 interview with Rolling Stone, the billionaire admitted that he was really in love, and it hurt a lot. Following their split, Musk struggled at his Tesla Model 3 event.

Musk went on to say that he was in intense emotional pain for a few weeks after the breakup and that it took all of his willpower to get through the Model 3 event without looking like the most depressed guy in the room.

Amber also texted Christian, a close friend of hers, after the breakup that she didn’t like her breakup news being all over the press. He then responded by stating that if she “stopped dating uber famous people,” she could “avoid” getting into trouble with the press.

He went on to tell Amber that if she didn’t want her personal life to be in the spotlight, she should avoid dating famous people.” Carino also recalled his close personal relationship with Amber and Johnny at the time, even arranging for them to meet with a couple’s counselor in 2015.

He claimed he had never witnessed any abuse and that the ‘Aquaman’ actress had never told him Depp had physically assaulted her. Amber allegedly physically abused Elon after he was photographed with a black eye with Amber Heard, which only magnified Amber’s history of domestic abuse, according to sources.

The relationship between Johnny Depp and Amber Heard did not end well, with Amber accusing Depp of being violent and abusive. However, audio recordings of Heard admitting that she started their fights and that she hit Depp were leaked, leading many to believe that the victim was Depp rather than her.

Many people believe Musk’s cut and bruise under his right eye were caused by Heard after Depp exposed him. Before their breakup made headlines, an insider said they broke up because the technology entrepreneur had had enough of her “manipulative and selfish behavior.”

According to the insider, Musk had heard some things about her behavior that he didn’t like. Amber has a tendency to be manipulative and self-centered. However, Heard and Musk were still photographed holding hands in public at the time, and a source close to the billionaire said it was just to keep up appearances because Musk isn’t a confrontational person.

He’s a laid-back guy who prefers to stay away from drama at all costs. Elon Musk’s name has been dragged into the Depps and Amber trial and has been accused of a variety of things during Amber Heard’s trial, including the former spouses’ agent Christian Carino testifying at the trial that Heard was dating Musk around the same time she was trying to reconcile with her husband.

Elon Musk, who stayed away from the Johnny Depp-Amber Heard defamation trial, appears to know the truth about the couple’s relationship because he did not get involved in the legal battle.

He didn’t say anything negative about him and took a balanced approach to the ex-couple, stating that he hopes that they both move on, and that they’re all incredible when they’re at their best.

The business tycoon stayed away from the explosive trial that exposed the ex-celebrity couple’s good, bad, and dirty secrets. What are your thoughts on Elon Musk’s relationship with Amber Heard? Let us know what you think in the comments section below.

Things appear to be going well for Musk yet again. For a long time, dating rumors have swirled around Musk and Bassett. According to a source, the two had been dating for “a couple of months” and were “already in a monogamous relationship,” according to HollywoodLife in February.

According to sources, Elon Musk and Natasha Bassett celebrated Memorial Day with a romantic getaway in St. Tropez over the weekend. On Sunday afternoon, the world’s wealthiest man, 50, and the Australian actress, 27, were photographed having a leisurely lunch at the posh Cheval Blanc hotel.

While sipping rosé and sharing a basket of French fries in the coastal town on the French Riviera, the two were seen gazing at nearby pool-goers and sunbathers. According to a source close to the couple, Maye Musk “is hinting and pushing for an engagement for her son and Natasha” and believes she is the “perfect” woman for him!

The sources further claim that His mother adores Natasha, and they get along pretty smoothly, which is important. She has also met both of his siblings, who all think Natasha is incredible.

Elon Musk, on the other hand, is facing allegations of misconduct after it was revealed that he paid a SpaceX flight attendant $250,000 to settle a previous claim in 2018.

He has since issued a statement on Twitter, claiming that the allegations against him should be viewed through a political lens, and that this is their standard playbook — and that nothing will stop him from fighting for a better future and the right to free speech. What are your thoughts on Musk’s relationship with Bassett? Do you think it will last? Share your thoughts in the comment section below!

1 thought on “I wish I knew this before dating her”