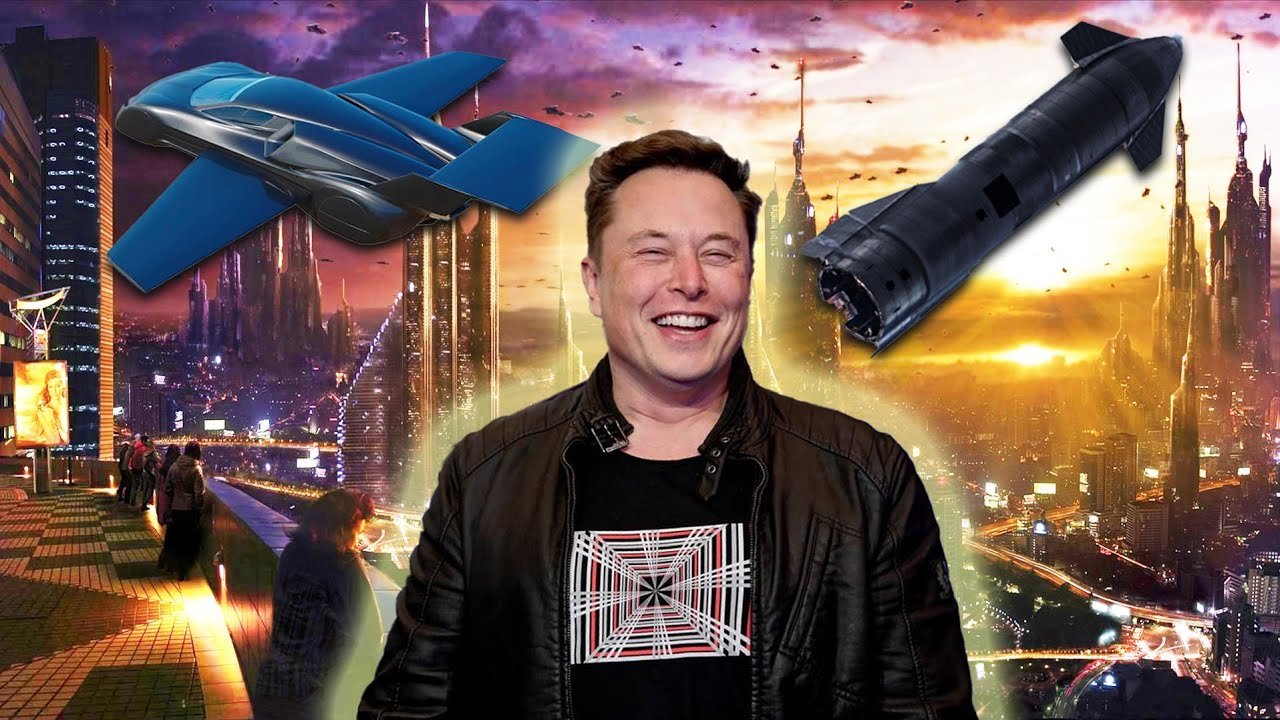 Tesla’s News Future Planned Mega City Infrastructure: One of the reasons nations like Japan thrived so much after the second world war, or South Korea after the Korean war, was because these nations industrialized.

However, Japan was much later to industrialize than the US, Japan actually wasn’t that wealthy a nation at the turn of the 19th century. Back then nations still used currencies backed by specie, Japan had chosen silver as it reserve. But the price of silver crashed and thus Japan’s economy with it.

Fiat currency isn’t great but specie backed currencies arent without issues either. Anyway, follow the war the US was able to move Japan on a path to capitalism, and was able to industrialize, except unlike the US, Japan was basically using a fresh canvas, and was able to leapfrog old technologies, legacy systems that were already antiquated.

Of course Japan kept growing like crazy, until everyone started freaking out, and thought his was going to be the global superpower. The property prices went so absurd that Tokyo was more valuable than the entire United States.

Eventually we realized that there are limits to progress, and the bubble popped in the 90s, and to this date has still not recovered to those highs. Similar scenarios to the 4 Asian Tigers, Taiwan, Korea, Hong Kong and Singapore.

Hong Kong and Singapore going from basic fishing towns, to mega hubs for the Asian financial centers, Taiwan become the biggest global supplier of chips, and Korea is amazing at manufacturing electronics. They have found their places within the global economy.

And now China too, noticing what was happening around them, and that opening up free markets actually does help the citizens and economy, and a lot less people die of famine, when compared to a command economy.

China also got to industrialize without legacy infrastructure getting in the way, and requiring massive retrofits, and China’s economy has jumped as a result. And once again we have people saying China will over take the US in GDP, just like they said the same thing about Japan.

Alright, so with all the latest advances in technology, right now we could pre-design a city, and make it better than previous cities. The infrastructure is so much more advanced today, and so much can now be done wireless. But that’s today’s technology, what about tomorrow’s? What about the future infrastructure of a city?

Now I have a strong inkling that Tesla are going to set up big in Indonesia. I think Tesla is going to help with Indonesia’s congestion and pollution issues, as Tesla literally have the right solution. But imagine if Indonesia was also able to industrialize in a big way.

Jakarta is already notorious for some of the worst congestion in the world, and with pollution to accompany it, resulting in thousands of people dying due to such bad air quality, and many years taken off the citizens life expectancy due to these conditions.

Believe it or not, more people live on the small island of Java, than in Russia. Although this may sound like something that Tesla can help with, but what if Tesla went the next level again.

In fact this wouldn’t be just Tesla, this would be Elon and his portfolio of companies, which could all potentially help in someway. In fact Indonesia are so concerned about the long term sustainability of Jakarta.

With a population of around 10 million people, and over 30 million people in the full metropolitan area, Jakarta has served as the national capital since Indonesia’s independence.

Aside from over population, the city happens to be built on a swamp, and is actually sinking, creating lots of flooding. In fact the city is rumored to sink by 2050, it’s actually that bad.

With fresh water running dry, more water is taken from the waterbed, and the surface continues to sink and compact, along with massive skyscrapers with lots of heavy metal and concrete creating more pressure to push on the soil below.

There are almost 5 million cars each day driving in Jakarta and 13 million motorcycles. Only 1/3 of city commuters use public transport. On top of that there are coal power stations within 100 km radius, only further adding to the pollution of the city.

One solution, for lack of better word, is that Jakarta are going to build a giant sea wall, that will go across the ocean bay, to protect the city, by around 2025. Along with working on the pollution in the rivers.

It is estimated to cost $40 billion. But with all these pressures, the president of Indonesia, Joko Widodo, has decided to move the capital of Indonesia, to the Island of Borneo. This is something nations occasionally do for various reasons, whether political or geographic.

Recently Burma has shifted capitals, along with Kazakhstan, even Brazil did a while back, and Egypt is currently shifting Cairo. Borneo is more central to the Indonesian islands, it also happens to free of volcanoes, unlike the other major islands.

The estimated cost of building the new capital there is estimated to be around $30 billion. This is a planned city that gets to utilize modern day infrastructure. And here enters Elon.

What if the Indonesian government are so impressed and overwhelmed with Elon, that they are willing to take a real plunge in the deep end with him? What if they were to let Tesla and associated companies, lay down the infrastructure of this new mega city.

What if this city was capable of becoming the most futuristic in the world, with commerce flowing like we have never before seen. Also supplemented with Tesla’s main international EV export hub. Can you picture it?

Of course we go beyond Tesla, and start to think Boring and SpaceX or Starlink. Imagine if Elon was able to set Boring tunnels throughout this new city? Granted, I think the Boring drills are still a bit too slow just yet, but we don’t know the timelines here.

Think what there would be outside of the city, a massive solar farm with huge battery storage, feeding renewable clean energy into a city. I am sure it’s likely every building may have to have a solar roof.

All the roads in the city can be designed around inner city micro transport, along with roads that are further oriented around autonomous driving. Due to the fact there being Robotaxi public transportation, that the vast majority of commuters could use.

Ubiquitous low cost internet everywhere in the city, or the entire country, finally all those islands that can have internet, that simply wasn’t before possible. If necessary they could even desalinate saltwater, apparently it’s only $3 per 1000 liters.

Although Elon actually said it was only 1/3 that price in the past, at just 0.1 cents a liter. Not sure why the price went up 3 times over the last 4 years, when solar costs are coming down. Think of how many people this could lift out of poverty, and give healthy living standards.

Think of how much more impact this has on the world, compared to you getting your $25,000 compact Tesla that you so badly covet, compared to children getting fresh drinking water. Do you see? The opportunity cost of you being able to afford your own Tesla, means that there are more people in the world suffering.

This is why I am much more excited about the overall mission, than getting my Cybertruck, or even my Plaid. If the world became the world I hope Tesla can make it, then I would gladly give away my shares tomorrow if that was necessary.

Yes, you probably are going to be rich, from holding your Tesla shares, but to me that satisfaction is feeling more empty when compared to the greater picture. So Tesla builds the infrastructure of a new city, and can hopefully do a reasonable job retrofitting old ones.

Creates tunnels in and out of important areas of the city for very fast electric transport. The entire city is electric only, no internal combustion engines.

They could use electric garbage trucks, I think BYD make them, It would be using AI systems for transport and energy, making the city run as efficiently as possible in unison. This would be a futuristic city.

Corporations would start to base themselves in Indonesia, perhaps as their central Asian hub, due to all the technological advancements. Who knows, they may even build the Indonesian Institute of Technology & Science.

Alright, I may be jumping the gun a little here, and overstepping some of my areas of expertise, perhaps in city planning, or civil engineering. But does it matter? I think I have said enough for you to get the point, and the specifics are not so important yet. The idea is. This is the start of something new.

It will take time. Maybe Indonesia can serve as a test city. It may not be until next decade when Tesla get to the city level, who have hopefully acquired Boring at this stage, yes, I am in favor of Tesla and Boring becoming one, due to the fact I think Boring is more valuable than Robotaxis and serve as a perfect complementary product.

It may not be until well into next decade when Tesla is digging tunnels under Paris, New York, and London, to relieve their traffic congestion. Tesla are doing things to such a large scale, that it will take a lot of time, decades.

They aren’t making a smartphone than can be produced in the 100s of millions in just years. These are far more commodity-intensive products. But the point is, that Tesla is more than just a product. It’s the future.

Thanks for reading till the end. Comment what’s your opinion about this information “Tesla’s News Future Planned Mega City Infrastructure“.