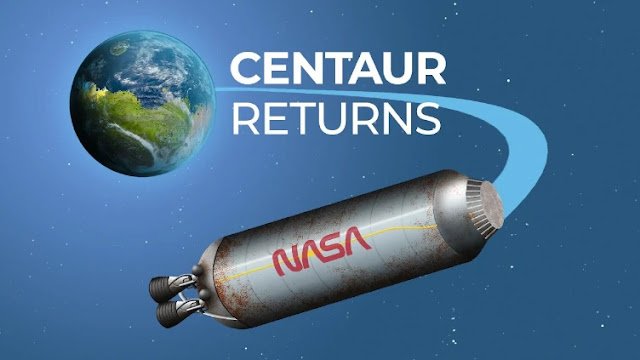 Mysterious Object Coming on Earth – NASA’s Centaur Rocket: On 6 February 2018, Falcon Heavy launched Starman and his Tesla Roadster into space. After leaving Earth, Starman ended up in orbit around the Sun.

Starman’s return to Earth is extremely unlikely. Its orbit is not expected to intersect Earth until the year 2047. Even if this happens, it will only pass 2 million miles for a brief period of time.

After this close encounter, it will continue in its orbit around the Sun, not returning to Earth for at least a few decades. Throughout the history of spacecraft, we have launched hundreds of objects beyond Earth’s orbit.

Few objects, such as the Voyager space probe, have moved fast enough to leave the Solar System. Once something is sent into space, that is usually the last goodbye.

And unless something is specifically designed to return, these objects are destined to spend the rest of their lives in space. Although natural objects enter the Earth’s atmosphere every day.

Most of these are large fragments of asteroids that broke up in our solar system a long time ago. Some of these are so large that they can survive rapid travel through Earth’s atmosphere and reach the surface.

Back in September of this previous year, astronomers were observing some of these asteroids using the NASA survey telescope on the island of Maui. This specific group of astronomers was focusing on asteroids moving toward Earth.

He discovered an object that was heading towards Earth with some unusual features. This object passed our Moon at 3,000 km/h, much slower than the normal speed of an asteroid, which can sometimes reach thousands of km/h.

Most asteroids have a more oval-shaped orbit, which is on an inclined plane than Earth’s. Preliminary calculations of this object showed that it has a very circular orbit around the Sun, similar to that of Earth.

Upon further inspection, the orbital plane of this object was not inclined, and in fact, corresponded perfectly to Earth’s orbital plane.

This low velocity, coupled with an Earth-like orbit, made astronomers think that it was not an asteroid but was actually an artificial object that originated from Earth.

He continued to observe the object and named it 2020SO. After further analysis and tracing its orbit, they found that object 2020 made its close approach to Earth back in 1966.

Looking at launch archives from this time period, they found one mission that almost entirely stood with it: the Surveyor 2 mission. Lifting off Cape Canaveral on an Atlas-Centaur rocket, Surveyor 2 headed for the Moon.

It was designed to conduct experiments on the lunar surface and send back detailed images that would help NASA plan for the upcoming Apollo missions.

After all, humans were just 3 years away from walking on the Moon, and yet little was known about the world they would enter. After launch, Centaur’s upper stage kept the spacecraft on a path toward the Moon.

But as Surveyor tried to refine its path, one of its thrusters failed and the spacecraft lost control until it hit the Moon at about 10,000 km/h. The centaur’s upper stage continued, flying over the Moon and entering an unknown orbit around the Sun.

For decades, this rocket booster was revolving around the Sun. But its orbit was slowly changing due to the constant pressure of the Sun.

Radiation from the Sun exerts a small but constant force on objects in space, like a very gentle wind. Since the Centaur Booster is essentially an evacuated metal tube, it is very light but still has a large surface area.

This makes it more vulnerable to solar winds than the denser and heavier asteroid. After observing this gradual change in orbit, astronomers confirmed that it could not be an asteroid and must have been something that was created by humans.

But astronomers still weren’t sure whether the object was actually the Centaur rocket that made the surprise return to Earth from the ’60s.

2020 was on a trajectory to enter Earth’s orbit in November – and astronomers calculated that it would make several close approaches during its stay, before returning to an orbit around the Sun in March.

This would be a great chance to see the object in more detail and determine if it was actually a Centaur rocket. However, the object was incredibly faint and required some of the most powerful telescopes in the world to see it.

At its closest approach, it will reach an apparent magnitude of only 14. On the magnitude scale, objects are visible to the human eye only after reaching 6 or below.

To put this in perspective, most of the planets in our solar system have a magnitude less than 1 and even they can be difficult to see with the naked eye. The only way scientists could prove this was the Centaur rocket, would be to find out if it was made of the same material, 301 stainless steel.

To do this, scientists took over NASA’s Infrared Telescope in Hawaii and began making spectroscopy observations. This telescope has a 3-meter wide mirror and is located on top of a mountain at an altitude of 4,000 meters.

It can measure a wide range of wavelengths in the infrared spectrum, allowing it to make spectroscopic observations. This technique is often used to study the environments of distant exoplanets, to determine what elements they are composed of.

As a planet passes in front of its star, molecules in the atmosphere absorb light at specific wavelengths.

By observing these dips at specific wavelengths, we can compare this to the data we have on Earth and determine which atoms and molecules are present in the atmosphere.

The same technique can be used on a solid object to determine its content. The atoms and molecules that make up stainless steel will emit and absorb light at very specific wavelengths.

The data showed some similarities, but the match was far from perfect. They realized that the difference in results could result from observing ordinary stainless steel against stainless steel that had been exposed to the harsh conditions of outer space for 54 years.

To get a real match, they would have to compare it to a piece of stainless steel, which has also seen the rigors of space.

Fortunately, there have been 245 Centaur launches since 1962 – and many older stages still remain in Earth orbit. But seeing one of these older rocket stages last longer would be a major challenge.

Objects in Earth’s orbit can move across the sky at incredible speeds. This means that NASA’s infrared telescope will struggle to lock onto the object for long enough to receive a good amount of data.

He chose to observe a Centaur rocket stage that carried a communications satellite into orbit in 1971. Despite the challenge, the scientists managed to lock onto the 49-year-old rocket and gather all the data they needed.

This happened on the same day that Object 2020 made its closest approach to Earth. The data came back and the spectrum graph of this old rocket stage perfectly matched that of Object 2020.

This proved that Object 2020 was made of 301 stainless steel and was undoubtedly the lost Centaur booster from 1966. So as we continue to launch more and more objects into space, our ability to detect which objects are headed toward Earth will become increasingly important.

As our presence in space increases and our technology becomes more advanced, observing such objects will become much more routine.

For object 2020, it will leave Earth’s orbit in March and continue to orbit the Sun until it eventually returns to Earth again in the distant future. Like Starman, these objects are on a journey we humans could never have imagined. But because of the laws of physics, they always come home at some point.

Thanks for reading till the end. Comment what’s your opinion about this information “Mysterious Object Coming on Earth – NASA’s Centaur Rocket“.