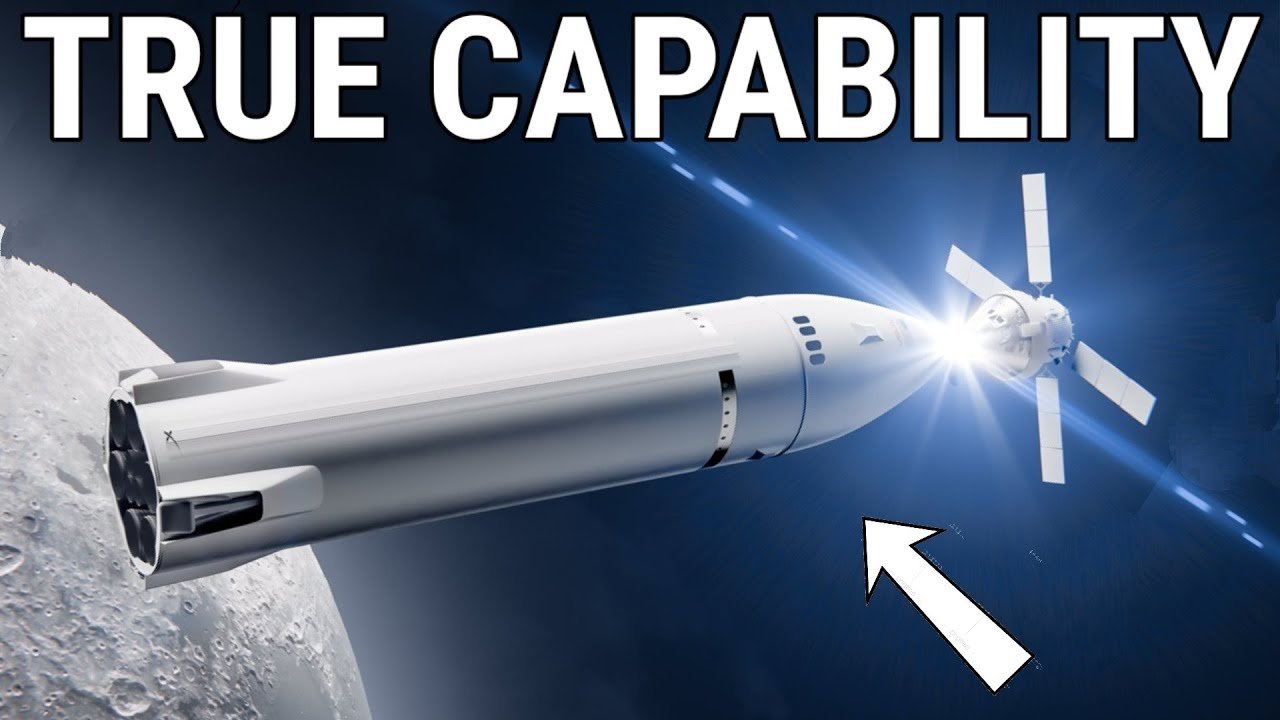 Elon Musk Says The Capability Of Starship Is Completely Shocking: Over the last couple of years, we’ve seen SpaceX go from a dirt field in Texas, to launching prototypes of the most advanced rocket ever made. The exciting developments down in Boca Chica have been mesmerizing to watch, and it’s clear that SpaceX is now all-in on making Starship a success.

In the future, they plan to have a fleet of Starships, launching all around the world with destinations such as the Moon, Mars, and even other places here on Earth.

As part of its Artemis program to return humans to the Moon this decade, NASA has a minimum requirement that its, human landing system, must be able to deliver 865 kg to the lunar surface.

This is based on the mass of two crew members, and their equipment needed for a short stay. However, in selecting SpaceX’s Starship vehicle to serve as its human lander, NASA has chosen a system with a lot more capability.

Starship will, in fact, be able to deliver 100 metric tons to the surface of the Moon—more than 100 times NASA’s baseline goal. Starship can land 100 tons on the lunar surface,” said Aarti Matthews, Starship Human Landing System program manager for SpaceX.

And it’s really hard to think about what that means in a tangible way. One hundred tons is four fire trucks. It’s 100 Moon rovers, that it’s the weight of more than 11 elephants.” Matthews made her comments last week at the ASCENDxTexas space conference in Houston.

She was responding to a question from an audience member, Jeff Michel, an engineer at Johnson Space Center. He works in the area of in-situ resource utilization, the processing and use of local materials known more colloquially as “living off the land.

What role, he asked, should NASA’s technical workforce play in developing these technologies? In answering the question, Matthews urged Michel and his colleagues, and NASA to think bigger about what they could do on the surface of the Moon, with a vehicle as capable as a Starship.

This would be wholly different from any capability NASA has ever had before. By way of comparison, in a “truck” configuration for cargo only, it was estimated that this Apollo Lunar module vehicle, could bring about five tons down to the lunar surface.

“NASA specified a high-level need, but we, industry, are taking away one of your biggest constraints, that you have in designing your payloads and your systems, she said. It’s a significantly higher mass. It’s essentially infinite volume for the purposes of this conversation.

And the cost is an order of magnitude lower. I think that our NASA community, our payload community, should really think about this new capability that’s coming online.” Think Bigger. Matthews noted that all space projects face extremely challenging mass and size limitations.

This, in turn, constrains the performance of the payload, be it a scientific experiment or some kind of demonstration. We all need to be thinking bigger and better and really inspirationally about what we can do,” Matthews said.

Precisely because Starship is so ambitious—it is larger and more powerful than a Saturn V rocket, and fully reusable—it has been easy to dismiss the vehicle.

And in reality, SpaceX still faces major technical challenges, before it is ready to deliver a flight-worthy, interplanetary transport system. But the message from Matthews was clear: NASA has already made a bet on Starship.

With its selection as the Human Landing System for Artemis, the large, cutting-edge vehicle is now on the critical path to landing humans on the Moon, NASA’s most ambitious human spaceflight program in half a century. And if NASA’s astronauts are betting that Starship will succeed, then the rest of the space agency probably should be, too.

There is some evidence, that this notion is beginning to take hold in the broader space community. A group of planetary scientists, for example, have started warming to the idea, that Starship could open up the Solar System to a new era of exploration.

When SpaceX sends its first test missions to Mars, these scientists say, NASA should have experimental payloads ready to take advantage of the mass, and volume capabilities of the new vehicle.

With her comments last week Matthews extended that challenge to Michel and other engineers and scientists at the space agency. “If you, as an engineer, are developing an in-situ resource utilization system, what does your system look like when you have no mass constraint?” she asked.

“What about when you have no volume constraint? That would be the exciting thing that I would like to hear from NASA engineers, what they can do with this capability.” Starship was created with the original purpose of helping humanity preserve civilization.

If Earth were to experience a cataclysm, such as a large asteroid impact, Musk also plans to use the Starship for satellite launches. In June of 2021, he wrote on Twitter that Starlink missions would move over to Starship, but that’s not all with the billionaire’s vision.

Musk has set his eyes on the cargo transport sector in plans to revolutionize it, and now it’s bringing huge profits for Musk. SpaceX one hundred and two million dollar Five-year contract from the US Air Force to help transport military, cargo, and humanitarian aid around the world.

Using a heavy rocket, this is the largest contract awarded to date for rocket cargo, and they certainly have compelling reasons to choose SpaceX. This responsibility requires a powerful Starship configuration, so how much can the Starship really carry.

And how will SpaceX deploy it for cargo transportation? Business products, or whatever it is you expect your shipment to arrive quickly, at the cheapest price, and without a hitch. Choosing a shipping method depends on a variety of factors.

Most importantly weight class and destination from the very beginning, the need to transport goods appeared with the most rudimentary tools. Gradually over time the forms of transportation have also increasingly diversified.

The fact is each year, more than ten billion tons of cargo is moved by ship, and billions of tons more are moved by road. International trade was the driving motivator behind advancements in global transportation.

As new inventions and discoveries were applied, travel time decreased while the ability to move more and larger loads increased. Innovation continues as transport researchers are working to find new ways, to reduce costs and increase transport efficiency.

The need to move cargo, however, is not limited to the Earth. For example, spaceship cargo to the ISS for NASA, and now they’ve gone on to win an important contract. The Pentagon is interested in being able to deliver cargo anywhere in the world, in order to support humanitarian aid.

During mid t2021, the US military expanded a small development program, that wants to leverage reusable rockets, like those of SpaceX, to deliver cargo quickly to anywhere in the world. The experimental program, called Rocket Cargo, is led by the US Space force.

The Pentagon said at the time the program will research, and help develop capabilities such as landing a rocket, on a wide range of nontraditional materials and surfaces.

Engineering a rocket, cargo Bay and logistics for rapid loading and unloading, and air dropping cargo from the rocket after reentry in order to service locations. Where a rocket or aircraft cannot possibly land, this contract has proven that SpaceX is the best choice right now.

Thanks for reading till the end. Comment what’s your opinion about this information “Elon Musk Says The Capability Of Starship Is Completely Shocking“.