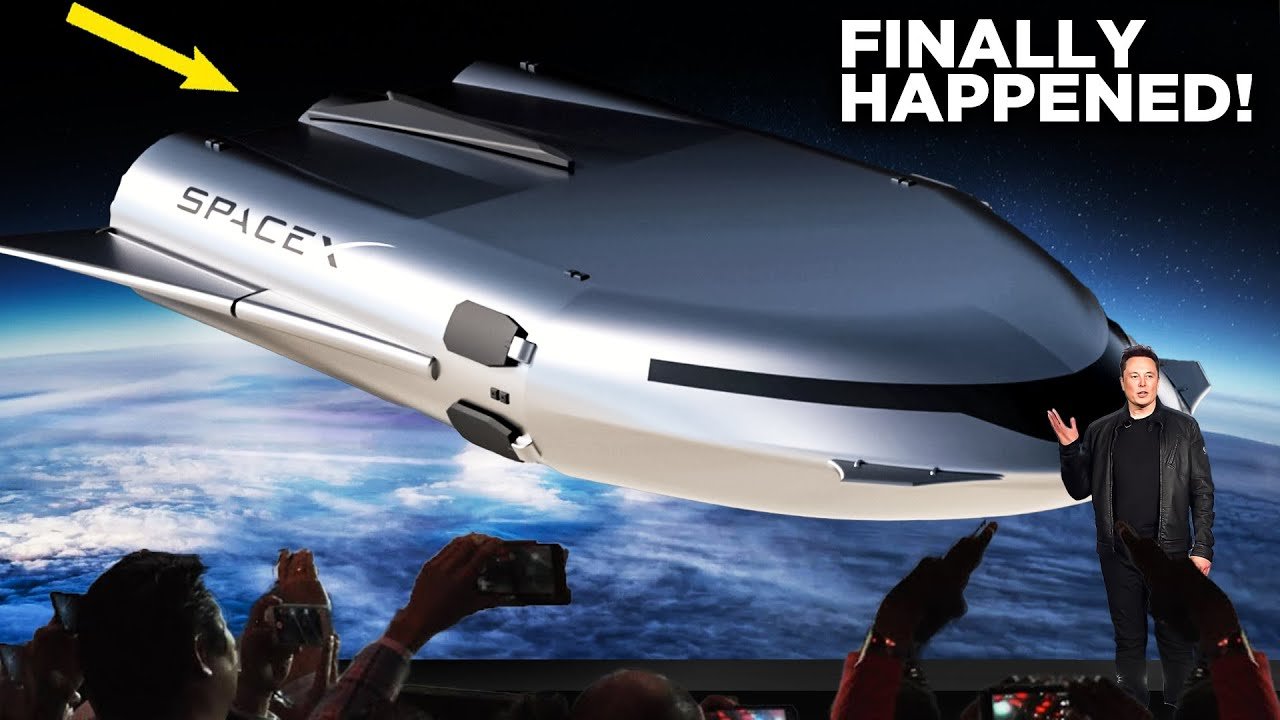 Elon Musk’s ALL NEW Starship 2.0 SHOCKS the Entire Space Industry: Elon Musk has always been a man with visions of overstepping the boundaries of what may seem impossible.

Ever since the visionary founder of the private space company SpaceX openly declared his dream of colonizing Mars, he had been working tirelessly on his Starship rocket, a massive next-generation rocket that Elon Musk hopes will soon carry humans to the moon and eventually to Mars.

Recently, he has hinted at its jaw-dropping successor, a much bigger and better rocket called Starship 2.0. The SpaceX Super Heavy Starship 1.0 will be able to launch 100 tons into orbit on a fully reusable basis, but Elon plans for the Starship 2.0 to be 4 to 8 times bigger.

The minimum distance from Earth to Mars is about 33.9 million miles, and Musk wants to send over 1 million people to the red planet by 2050. For the colony to be self-sufficient, Musk needed to transport a ton of other things, which he said would amount to up to a million tons of material therefrom Earth.

This would cost a whole lot of money, so Musk has to figure out an affordable yet effective means of ferrying mankind between planets. That’s when Starship 1.0 came to light.

To get a feel of how big Starship 2.0 is, let’s take a look at the current first generation of Starships, the Starship 1.0. Standing at nearly 400 feet tall when fully stacked together with the Superheavy rocket booster, Starship 1.0 stands taller than the Statue of Liberty.

It also towers above the Saturn 5, the rocket that sent American astronauts to the moon during NASA’s Apollo program. Since 2019, the huge rocket has been steadily emerging as a silvery sentinel built with stainless steel alloy.

Starship has a diameter of 30 feet — wider than any other orbital spacecraft — which is meant to make it possible to transport large amounts of cargo, giant celestial observatories, or perhaps many people. In terms of power, the Starship is more powerful than any other known rocket in human history.

To get to orbit, Starship sits atop a towering rocket booster called Super Heavy which measures around 69 meters. Once the two pieces of the spacecraft plow through the stresses of Earth’s atmosphere, the two parts separate near the edge of space.

As Starship continues farther toward orbit, the Super Heavy booster that helped it off the ground returns for a landing near its launchpad. A massive tower equipped with mechanical arms, which Mr. Musk calls “chopsticks” will attempt to grab the descending rocket to softly land it.

Subsequently, newer versions of the Super Heavy rocket Booster (B7) – will use up to 33 Raptor V2 engines to further expand the engine-related capabilities of the Starship compared to the 29 Raptor V1 engines installed on Super Heavy B4.

You need a massive ship like that to function as a reusable colony wagon, and as a space “liner” to carry passengers and freight back and forth. However, considering the size of the payload needed to establish a self-sufficient city on Mars, Starship 1.0 doesn’t really cut it.

According to Musk, the next generation of Starships dubbed Starship 2.0 will be twice the size of the spaceships that will transport personnel and cargo to the moon and mars. Elon tweeted that Starship Version 2.0 will be 18 meters in diameter instead of 9 meters.

He made the comments in response to a question from one of his numerous Twitter followers about his plan to build a larger version of the Starship in the future. This would mean that Starship 2.0 would be 240 meters tall or 775 feet tall, and 18 meters or 60 feet wide.

This would make it the widest rocket ever built. The area of the cross-section would be 4 times higher, and it would have 9 times the volume of the Starship 1.0. The engines would likely be upgraded for the Ultra Heavy Starship 2.0.

This means the next rocket might be able to launch around 1000 tons per launch. In case you didn’t already know, doubling the diameter of a circle quadruples its area.

Coupled with a doubling of height and a hypothetical Starship 2.0 would have 8 times the surface area and eight times the propellant tank volume requiring roughly eight times as much thrust and making the vehicle eight times as heavy as starship 1.0.

Presumably, that would mean that the next generation of SpaceX super heavies would be able to place payloads up to 800,000 kg (~1.764 million lbs) to Low Earth Orbit (LEO), the Moon, and Mars – provided orbital refueling is an option. That works out to about 800 metric tons (881 US tons).

To be able to lift off a rocket as massive as this – we are talking about the Starship 2.0 of course – Musk needs really powerful engines. Roughly 60 Raptor 1.0 engines would be needed to help this rocket take off! Fortunately, Elon has been working on a more powerful engine known as the Raptor 2.0.

Elon Musk provided an update on his favorite social media platform, suggesting the orbital maiden flight of Starship might be just around the corner. “Each Raptor 1 engine above produces 185 metric tons of force. Raptor 2 just started production & will do 230+ tons or over half a million pounds of force.”

He said in a tweet touting the increased performance of the super powerful Raptor 2 engine. Hence, using the Raptor 2 engine, the Starship 2.0 would need less than 60 engines to lift off. Earlier in 2016, SpaceX had a 12-meter diameter ITS rocket design.

It was designed to launch 300 tons to orbit and, with refueling, could launch 450 tons to Mars. The ITS was about double the volume of the current Starship Super Heavy but had 3 times the payload. If the 18-meter Starship 2.0 had similar scaling, then it would have 9 times the payload of the Starship.

The 240-meter tall rocket would be twice as tall as the Statue of Liberty and about 75% as tall as the Eiffel Tower. A bigger starship is better in many scenarios.

During an argument with Jeff Bezos about the Artemis contract, Musk said that refueling starship for lunar landings would take 10 launches, or else there won’t be enough fuel to get there, and a crewed flight to Mars would become a hundred times more complicated which Jeff Bezos termed High risk.

However, a larger starship 2.0 that can supply all the fuel will simplify things massively. Additionally, with its large size, the starship itself must also become a fortress to live in for a long time before we complete all the facilities that will serve the lives of a hundred volunteers to first step foot on Mars.

Another reason for such an ungodly huge StarShip might be that Mars really does need some 600-tonne payloads that can’t easily be divided up into 150-tonne chunks.

Ultimately, if the Martian colony is going to be self-sufficient, obviously, they can’t do manual labor with the harsh weather conditions on the red planet. They are going to need things like iron ore excavators, civil aircraft, and steel mills with massive cauldrons and rolling mills.

Things that aren’t easy to split up into smaller loads. The 9-meter payload bay diameter starts to look problematic for some of the things that the Mars colony might ultimately need, but the 18-meter Starship 2.0 would be a more feasible option.

Finally, the massive payload of a future generation 2 SpaceX Starship could then launch factories and advanced production systems anywhere, and most importantly, Musk will be able to attain his plans for Mars much faster with this larger and more powerful rocket.

The capacity of the powerful starship to lift more cargo per trip will make delivering the supplies needed by colonizers faster, thereby reducing the number of trips required to do so.

There is also a need to consider the economic aspect of Starship 2.0. You don’t just build a big rocket because you have a couple of billions lying around. Musk said full reusability and thrifty use of propellant would drop the cost of each Starship 1.0 launched for just 2 million dollars.

On the other hand, if you were to carry out 8 launches of Starship 1.0, it would cost an estimated total of 16 million dollars. So Starship 2.0 will basically have the costs for the same amount of payload. The number of passengers in every batch on Starship 2.0 will also grow from the initial 100 to a thousand.

Thanks for reading till the end. Comment what’s your opinion about this information “Elon Musk’s ALL NEW Starship 2.0 SHOCKS the Entire Space Industry“.