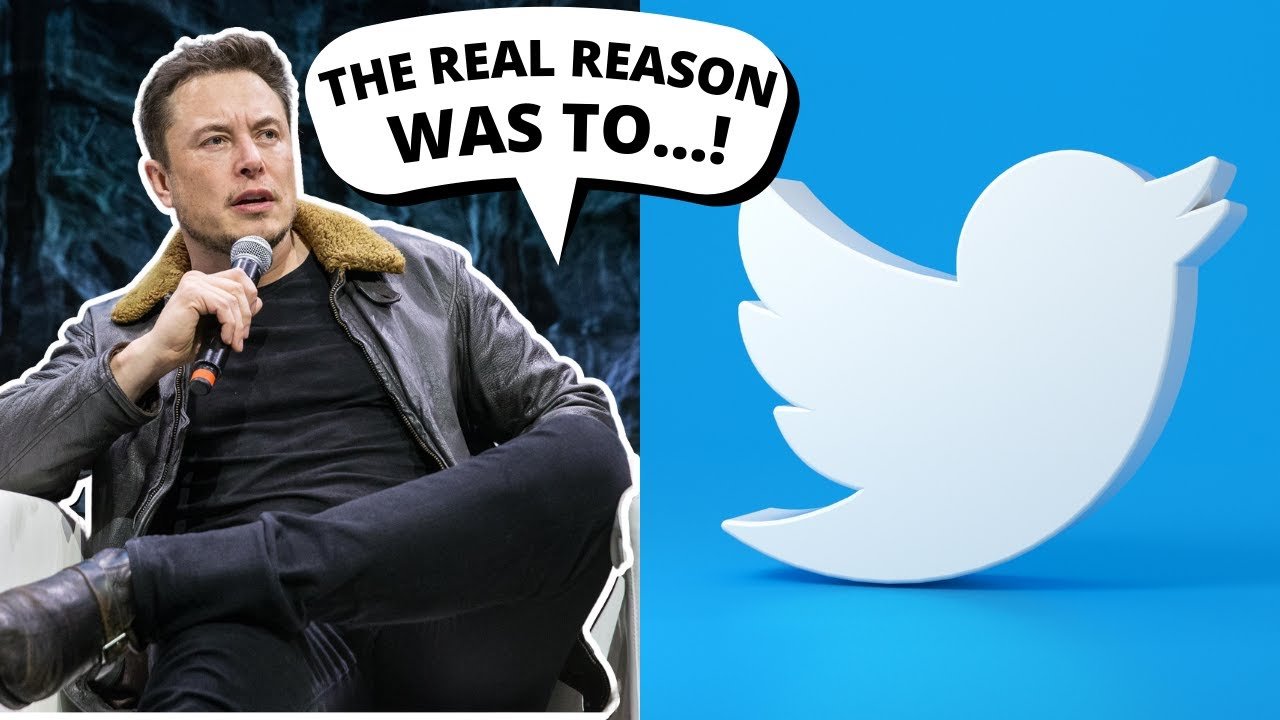 Real Reason: Why Elon Musk Bought Twitter:- The man behind notable tech companies such as Tesla and SpaceX is known for venturing into new markets as well as entering existing ones. On 14 April 2022, Elon Musk made an unsolicited offer to acquire the company for USD 43 billion.

On April 24, the board accepted the offer for USD 44 billion. Welcome to “Tech Heaven” and in this video, we’re taking a look at the real reason why Elon Musk bought Twitter…

Musk is one of the most popular Twitter users, with over 86 million followers. He is also an avid user of the social networking platform, and the majority of his thoughts on business and current events are channeled through this online-enabled channel.

Some of his previous tweets sparked interest in his companies or cryptocurrencies such as Dogecoin. Of course, these are not sufficient reasons for him to spend billions of dollars to acquire the social media platform.

Nonetheless, this raises the following issues: Why did Elon Musk invest in Twitter? What are his goals and intentions? What exactly does he want from Twitter? How does he intend to run the platform? What are his future plans for the company?

One of the reasons Musk wants to buy Twitter is that he believes the platform’s current policies obstruct free speech and public discourse. In a public statement, he stated, “Free speech is the bedrock of a functioning democracy, and Twitter is the digital town square where matters vital to humanity’s future are debated.”

It is worth noting that the social media company has increased its campaign against messages that it believes endanger the public’s interest. Due to the risk of further incitement of violence, it even permanently suspended Donald Trump’s account in January 2021.

Critics of Musk have argued that he could relax Twitter’s policies to allow notorious personalities unrestricted access to the platform and use it to advance his political and business interests.

In a tweet, the multibillionaire clarified that he meant free speech in the legal sense. He also stated that he is opposed to censorship that “exceeds the law,” and that “if people want less free speech, they will ask the government to pass laws to that effect.”

He believed that going above and beyond the law was against the will of the people. Observers speculated that Musk may want to expand the platform’s user base and increase account owners’ engagement with one another through diversity and inclusion. Some people are concerned about the spread of misinformation and hate speech.

It serves over 200 million people in key regional markets such as North America, Southeast Asia, South America, the Far East, Europe, and South Asia. However, unlike other internet-based and service-oriented tech companies like Google and Meta Platforms, which derive the majority of their revenue from online advertisements, Twitter has not fully realized its revenue-generating potential.

Even so, its stock market performance has been disappointing. It should be noted that the company was founded in March 2006 and went public in November 2013.

The April 2022 disclosure that Musk owned 9.1 percent of the company resulted in a 27 percent increase in the stock price, the largest intraday increase since the company’s initial public offering.

Elon Musk also stated that he wants Twitter to improve with new features such as making its algorithm open source to increase trust, dealing with spam bots, and authenticating all human accounts and human interactions. He also wishes to return the company to a private ownership structure.

Following the acquisition offer, he explained in a letter to Twitter that the company needs to go private “to go through the changes that need to be made.” Musk will be able to pursue initiatives without having to appease public shareholders.

By the way, if you are watching us for the first time, make sure to hit that subscribe button and turn on notifications so you can enjoy our future videos while getting updated. Getting back to the topic …

A Further Note On Why Elon Musk Bought Twitter

It is important to note that the aforementioned reasons why Elon Musk purchased Twitter or why he has insisted on owning or participating in the social media company remain unconfirmed.

The multi billionaire business magnate is volatile. What is certain is that he continues to be the type of entrepreneur and business leader who pursues a project or initiative for a reason. He is also visionary and forward-thinking.

Remember that he bought Tesla and turned it into one of the pioneers of electric vehicles as well as the world’s largest automaker in terms of market valuation. As part of his vision to rekindle public interest in space exploration and Mars colonization, he founded SpaceX.

Through its Starlink business division, the company has pioneered cost-effective launches and promoted the use of satellite internet. Musk may have bigger plans for Twitter that are in line with the internet’s future.

It may become acquainted with technological advancements such as the expanding applications of blockchain technologies and the prospects for establishing a metaverse. It is worth noting that Facebook has become Meta because it recognizes future metaverse applications.

Musk stated at a TED event on the day he announced his $44 billion bid that he wants to open source Twitter’s algorithm and code. This means that anyone would be able to access and iterate on the platform’s publicly available code.

Musk stated at the same event, “The top priority I would have is eliminating the spam and scam bots, as well as the bot armies that are on Twitter.” They are degrading the product significantly. If I had a dogecoin for every cryptocurrency scam…”

He proposed “authenticating all humans” to combat bot spam. While these strategies can help reduce spam, they can also make it more difficult for marginalized people to express themselves.

“Pseudonymity and anonymity are essential to protecting users who may have opinions, identities, or interests that do not align with those in power,” wrote the Electronic Frontier Foundation in a blog post.

I heard that the transaction has been halted due to bots. What does this imply? Perhaps our brave hero has finally realized that spending $44 billion on a social platform is more trouble than it’s worth.

For a long time, he’s been concerned about bots on the platform, as evidenced by his fantasy of verifying all humans on Twitter. The company estimates that bots account for less than 5% of accounts on the site, but “lame duck” CEO Parag Agrawal believes this calculation cannot be independently verified because it requires the use of private company data.

Musk’s response was a poop emoji. Following his pixelated feces, he asked Agrawal, “So how do advertisers know what they’re getting for their money?” This is critical to Twitter’s financial health.” Advertisers, it appears, aren’t as concerned as Musk.

For years, the company has stated in its earnings reports that the number of fake accounts may be higher than their data indicates, which isn’t an outrageous statement. Wouldn’t Musk have read a shareholder letter before acquiring the entire company?

Musk has stated that the deal is “on hold” due to spam, but he appears to be committed to the acquisition. Nonetheless, this statement caused Twitter’s stock to drop by 25%. According to Bloomberg, Twitter’s top lawyer and head of policy, Vijaya Gadde, told staff at an all-hands meeting that “there is no such thing as a deal being on hold.”

He has a contractual obligation to complete the transaction; he cannot simply refuse to do so unless he has a compelling reason, and having more than 5% of users as bots is not a compelling enough reason, according to his contract.

Thanks for reading till the end. Comment what’s your opinion about this information “Real Reason: Why Elon Musk Bought Twitter“.