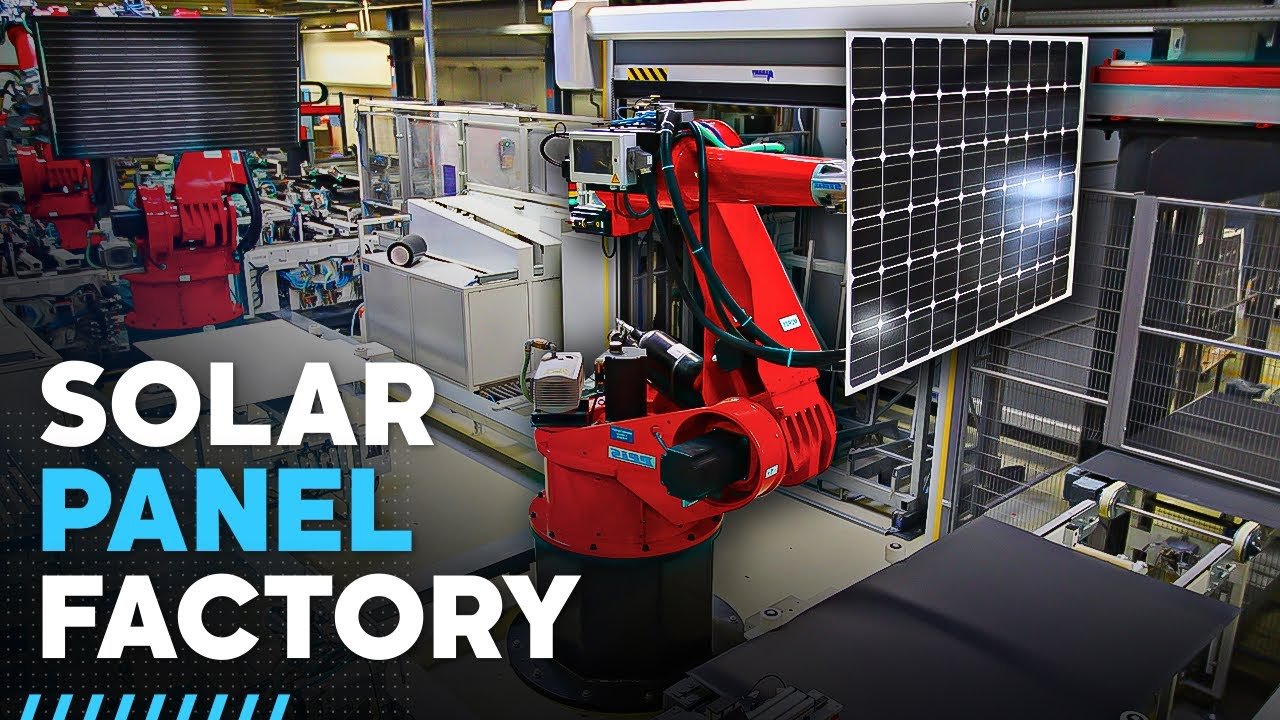 Take A Look Inside This Solar Panel Factory 2022: Gigawatts upon gigawatts of clean, green solar capacity is being churned out by high-tech factories all around the world. But how are solar panels actually made? Join us now on a sun-seeking sojourn as we look inside a solar panel factory.

To do that, Indians will need to make solar panels. Lots of them. Vikram Solar is one of a few big players in the field vying for a slice of this lucrative growth market. And Vikram recently expanded its own capacity by a not-insignificant 1.3GW through the opening of its new 130,000 square feet plant in Oragadam, Tamil Nadu. So let’s see what goes down inside.

Solar panels, also called solar modules, are made up of a number of individual solar cells. These cells can trace their origins back to simple silica sand, from which silicon is extracted. Silicon is the second-most abundant element found in the earth’s crust by the way. So we’re not likely to run out any time soon.

Cooked at 2,000 degrees Celsius in a furnace along with a source of carbon, the raw element is then cooled to create metallurgical grade silicon. This is usually liquified again in order to remove the remaining impurities.

It’s then blended with a pinch of boron and a dash of phosphorus, moulded into ingots then sliced into tiny wafers less than 0.2mm thick. These wafers are then coated with silicon nitride and roughed up a bit to create texture and reduce reflectivity – any light that bounces off a solar panel is wasted, of course.

A silver paste is then applied to the front and rear surface and, pretty much, that’s your solar cell. At Vikram Solar’s new Tamil Nadu facility, these incoming cells are visually inspected to find any obvious cracks or breakages.

Cracks in the solar cells render them useless for large modular applications like solar panels. But more often than not, smaller sections of solar cells can be cut away and used for smaller, less intensive off-grid applications, like solar-powered toys.

After this manual visual inspection, the first of several tests under blasts of artificial sunlight, to check they work, is undertaken. Then a hydraulic conveyor system introduces a layer of EVA – that stands for Ethylene-vinyl acetate – to a flat pane of tempered glass.

This EVA layer serves as an adhesive to hold fast the rows of solar cells that are automatically laid on the pane in a careful tile pattern, by this six-axis robot arm that can move 12 cells at once. The cells are connected to each other, and ultimately the grid, via a criss-cross pattern of narrow metal ‘fingers’ and fatter ‘busbars’.

These carry electrons generated from the activated cells to the tab wires and beyond, to whatever the panel will ultimately power. Engineers looking to maximise the efficiency of solar cells have debated whether it’s better to have more busbars – conventional wisdom says 5 is a good upper limit – because resistance is lowered, although the additional hardware inevitably shades parts of the solar cell.

More fingers and busbars can also mitigate the risk of micro-cracks appearing in the cell, or at least prevent cracks from spreading too far across the cell. Once all the cells are in place, another layer of EVA is laid over the panel and an additional backsheet is added to encapsulate the cells and internal wiring.

The next stage is called ‘pre-lamination electroluminescence’. Exploiting one curious property of photovoltaic cells – that they light up whenever a current is passed through them – inspectors can look even closer for microcracks that might render the final panel inefficient or at worse useless.

All they need to do is identify the dark spots. These microcracks, incidentally, can creep in at any stage of the process. Silicon wafers are notoriously brittle, and mishaps during the manufacturing or transportation phase are common.

Wild fluctuations in ambient temperature can also cause irreversible damage. After this pre-lamination electroluminescence phase comes – you guessed it – lamination. An industrial laminator applies heat and vacuum pressure to the ‘sandwich’ of glass, EVA, solar cells and wires, binding everything together in a taut, weatherproof panel.

Following this stage, circuit ribbons are attached to the edges, and an aluminium frame is placed around the edge This aluminium frame offers the panel sturdiness, which helps prevent nasty cracks. These frames also make the panels much easier to handle and store, as well as offer some resistance to the day-to-day mechanical loads the panel will be subjected to, like heavy snow or gale-force winds.

Another electroluminescence test follows, and the installation of a so-called ‘junction box’ on the backside of the module using strong silicone adhesive. This junction box serves not only as of the collector of electricity, but its diodes ensure power only ever flows in one direction.

This is important because solar panels by their very nature generate differing and unpredictable amounts of electricity throughout their working lives. Final testing looks for weaknesses in the panel’s weatherproofing.

Next, the completed panel is subjected to a final blast of artificial sunlight. And now our panel is ready to ship. Vikram Solar’s shiny new Tamil Nadu facility is part of a wider drive within India to achieve what prime minister Narendra Modi has called his ‘Atmanirbhar Bharat’ initiative.

This translates, pretty much, to ‘self-reliant India’, the idea being to wean the subcontinent off of its dependence on foreign expertise and expensive imports. The new plant is all set up to embrace emerging technologies, for instance using Artificial Intelligence algorithms to spot microcracks early in the manufacturing process.

As Vikram Solar’s managing director Gyanesh Chaudhary puts it. ‘This is an extension of our endeavour to provide high quality, reliable, technologically superior products and timely delivery to our customers. It will further contribute as an R&D platform for next-gen module technology’. Talk about sunny optimism. What do you think? Is solar still exciting? Let us know in the comments.

Thanks for reading till the end. Comment what’s your opinion about this information “Take A Look Inside This Solar Panel Factory 2022“.