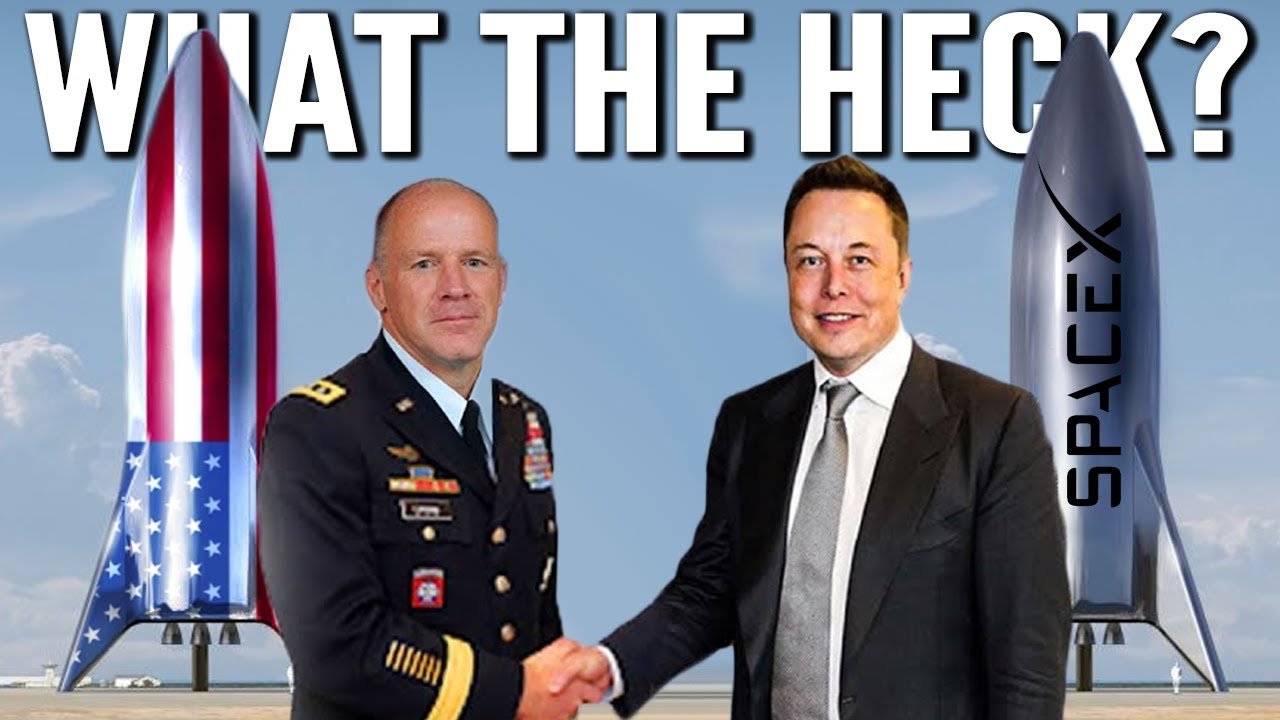 Insane Partnership Between Elon Musk SpaceX & Pentagon: SpaceX is right at the top when discussing space travel and technology. For a company founded 20 years ago, that is a great deal of progress. SpaceX has crammed more achievements under its belt in the last decade than NASA.

Elon Musk, founder and CEO of SpaceX, has admitted that his company is at the forefront of space technology and far ahead of the competitors in this sector. This kind of success means that SpaceX is prone to copycat organizations. Join us today as we discuss a sensitive topic that involves the Pentagon. We will discuss what happened between SpaceX and the Pentagon and how the Pentagon went from copying SpaceX’s ideas to partnering with the private space company to bring the concept to life.

SpaceX and the Pentagon haven’t always been on good terms. In 2014, the private space exploration company sued the Pentagon because it felt that the government organization had structured a contract to its disadvantage.

The Pentagon objected that SpaceX had missed the deadline to file a protest regarding the said contract, but it settled the case in 2015 by revising the contract, so companies like SpaceX have a better shot at bidding.

Amidst all these lawsuits and what seems to be a secret beef between SpaceX and the Pentagon, the two organizations seem to be working together now. Before we get into how they became partners, let’s talk about the Pentagon copying SpaceX. What exactly is this project that the Pentagon is trying to copy from SpaceX?

Sometime in the middle of 2021, the Pentagon announced the launch of an experimental project known as RocketCargo. The Pentagon has earmarked $48 million for the fiscal year of 2022 toward the project.

RocketCargo is the brainchild of the United States Transportation Command, the Air Force Research Laboratory, and The United States Space Force. The program aims to use sub-orbital spaceflight to deliver cargo to every corner of the planet. Yes, we know the earth is round and has no corners, but you get the point.

The program aims to develop the capability to send cargo to any part of the world at record speeds, using rockets. This plan will involve using reusable rockets and space vehicles that are capable of propulsive landings at designated landing sites. Does that sound familiar?

It sounds familiar because this plan is similar to what Elon Musk has planned and is working to achieve. SpaceX aims to reduce the cost of space travel significantly by developing reusable rockets. It is also developing rockets that can perform propulsive landings, a goal aimed toward the colonization of Mars.

The Pentagon’s well-thought experiment sounds like what we had heard before because Elon Musk made a similar plan known to the world in 2017. Before the first Starship was commissioned, Elon Musk discussed his dream of earth-to-earth rocket transport.

He showed a demo at the International Astronautical Congress in 2017, where starship rockets transport passengers from London to New York in 29 minutes at the same fee an airline charges for an economy flight for the same distance.

Elon Musk proposes to do this by launching his starship rockets into low-earth orbit where air resistance is almost non-existent. At such high levels, under such conditions, the starship rocket will be able to move at incredible speeds of up to 27,000 kilometers per hour.

SpaceX released some mind-blowing flight durations to show us how much time these rocket flights will save you compared to regular airlines. Honolulu to Tokyo takes 30 minutes, New York to Paris, two different continents take 30 minutes, and Sidney to Singapore takes 31 minutes.

Elon Musk’s dream has not become a reality yet, but can you see the similarities between his dream and the Pentagon’s RocketCargo experimental program? Having commercial rocket flights like these will change air travel as we know it. But do the Pentagon and the United States Space Force possess the technology to make the RocketCargo program operational any time soon?

SpaceX has not perfected the Starship; Elon Musk didn’t specify in his plan that the Starship would be used as the space vehicle of choice. But looking at how far SpaceX has advanced in propulsive engine technology, it has what it takes.

SpaceX has had more successful launch missions than any other space organization; they have also landed the falcon booster rocket more times than we can count. The Pentagon does not have the resources or expertise that SpaceX has; it doesn’t have the personnel either.

The Space Force is 5000 men and women strong; even with the proper funding and equipment, it doesn’t guarantee that the project will be operational anytime soon. SpaceX has been in this field for over two decades, so they have the experience that the Pentagon and Space Force sorely lacked.

You might wonder why the Pentagon didn’t just turn to NASA, a government space exploration company. NASA has not had an excellent track record of bringing its projects to fruition. It has spent over 20 billion dollars on the SLS rocket but hasn’t launched yet.

SpaceX has won two contracts from the Pentagon to the tune of $160 million. The contracts involve using SpaceX’s Falcon 9 rockets to launch US military craft. This is not the first time the Pentagon will award SpaceX a contract. It has previously received a sum of $149 million to build missile-tracking satellites for the department of defense.

SpaceX is not the only private space company the Pentagon is in cahoots with.; the United Launch Alliance, a joint venture between Boeing and Lockheed Martin, has also been awarded a contract of $224.2 million.

The Head of the United States Transportation Command (TRANSCOM), General Stephen Lyons, has confirmed that both the Pentagon and SpaceX are working to bring the concept of cargo delivery via orbit to fruition. He hopes they can conduct tests as early as 2021.

He admitted that although the thought may seem provocative, he is excited about working with SpaceX on the project. After General Lyons’ comments, TRANSCOM revealed that it had entered into two research and development agreements with two different companies, SpaceX and xArc.

SpaceX signed in March 2020, while xArc, a commercial space architecture firm, signed on in April 2020. SpaceX and xArc are working to assess the cost, technical, and regulatory barriers that would affect this concept.

These agreements do not come with government funding like many of the other contracts signed by SpaceX. Still, TRANSCOM will provide the logistics and everything needed to support the programs required for NASA’s return to the moon and our eventual journey to the red planet, Mars.

TRANSCOM plans to build a rocket that can carry 80 metric tons of cargo and payload to any point on the planet in less than one hour. The rocket will also be capable of speeds of up to 7500 mph. We would all love to see this new rocket since it is unheard of.

The United States strategic and tactical airlifted, the Boeing C-17 Globemaster, is the equivalent of this rocket in terms of the amount of payload it can carry. The C-17 is currently in service even though it has been in production since 1991. Production for the C-17 ended in 2015 with just 279 units produced, and each one cost 218 million dollars.

It has a maximum speed of 670 miles per hour and its flight time from Florida to Afghanistan is 15 hours. If the RocketCargo becomes a reality, it will render the C-17 obsolete. That’s without mentioning that the ability to supply troops with supplies or reinforcement in any part of the globe under one hour would go a long way to add to the military might of the United States.

General Lyons has commended SpaceX; he mentioned that the capabilities of SpaceX’s starship are the blueprints for the project RocketCargo. SpaceX always moves fast, and they seem to be making progress rapidly. The Pentagon’s choice of SpaceX is clear; they have the plans for Starship, which is already a work in progress.

They have also perfected the ability to launch and land a reusable rocket system on earth. SpaceX’s portfolio lends credibility to the project RocketCargo. One day, earth-to-earth rocket travel will become the new normal. We don’t know the role xArc will be playing as regards project RocketCargo, but the profile and portfolio of the company suggest that it would build the landing pads for the system when it is ready.

The Pentagon is not putting all its eggs in one basket. It has revealed that it is still watching the progress of other companies with rocket launch capabilities like Astra, Virgin Orbit, and Rocket Lab. It also aims to use its partnership with SpaceX to gain access to the Starlink satellite network to track its assets around the globe better and improve public GPS.

SpaceX has built a reputation for itself, making it the go-to private space exploration company for the United States Department of Defense. Elon Musk isn’t just making space travel cheaper; he is also helping to ensure world peace. Tell us in the comments section what you think about this partnership.