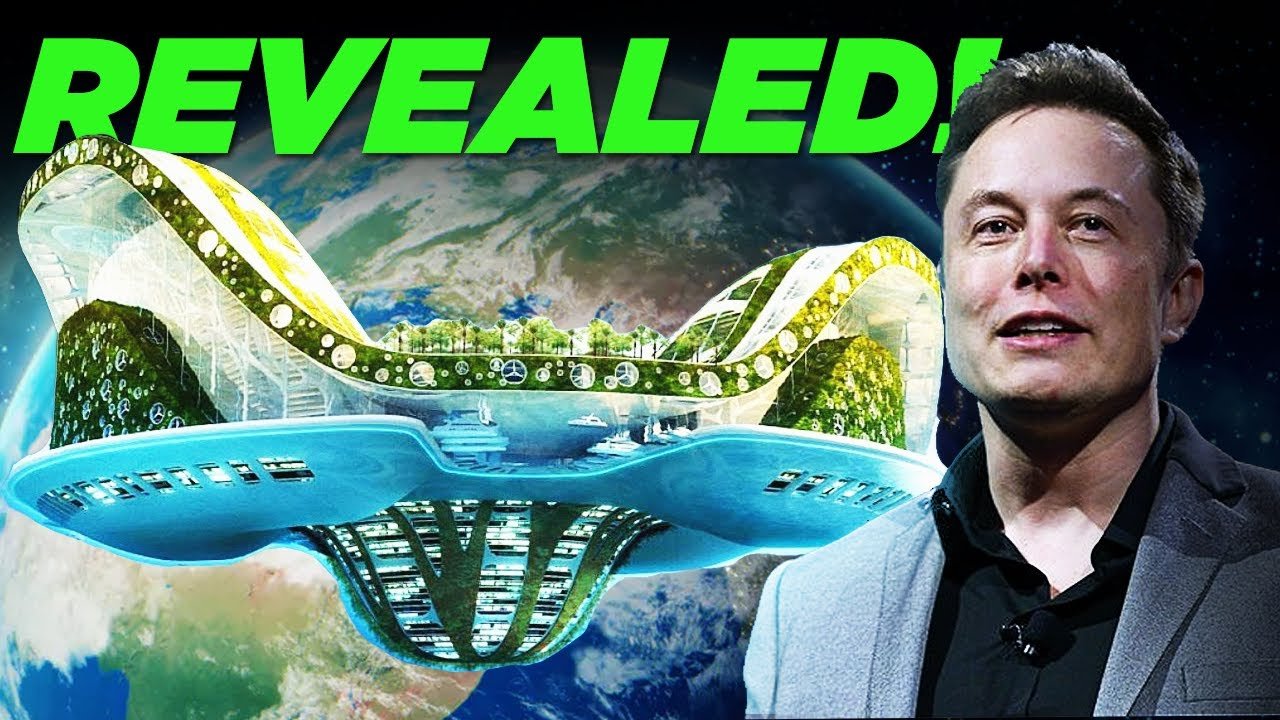 Take A Look This Elon Musk’s INSANE New $3.2B Space Factory Project: Space agency SpaceX owned by our very own Elon Musk collaborated with Varda Space Industries to launch the first-ever space factory into orbit. Building materials with high monetary worth, such as optic cables and bio-printed human organs will be the main deliverables of the factory.

Among the many grandiose aspirations of space company CEOs like Elon Musk are plans to industrialize space. “Proponents who are in favor of this mission claim that doing so will significantly reduce the pollution on Earth.

Furthermore, the advantages of working in a microgravity environment should be fully reaped”: said Elon in a recent interview. Intriguing isn’t it? Read till the very end as we have all the exclusive insider information about this massive space project. Let’s dive in!

A look inside the very first space factory of its kind! Varda space plans on connecting at least three Photon spacecraft during the beginning of its development phase. In contrast to the International Space Station (ISS), Varda intends to use them for space manufacturing that does not require human intervention.

Once production is complete, the craft will be equipped with re-entry capsules that will return the manufactured goods to Earth. In order for Varda to be viable, it will need to manufacture more than a few hundred kilos of material in its first factory.

It is for this reason that the business will be focused on high-value products that sell for high prices despite their limited market share. Furthermore, when manufacturing products in space, there is no chance of contamination.

Thus, the products created will have high purity levels as well. Some examples include crystalline structures, semiconductors, medicinal components, and optic cables. Their space factory is said to be operational in less than 18 months!

A collaboration to benefit all In their statement, Varda executives pointed out that cooperating with SpaceX provided them with the most cost-effective and reliable solution for launching the mission into orbit.

Their financial strength is heavily reliant on the amount of money they spend on launch costs. The firm, according to Delian Asparouhov (Co-founder of Varda), is quite thrilled about this new partnership because it would not only save them money, but it will also allow them to expand their reach.

Varda expects to spend approximately 7.5 million dollars to launch an electron rocket delivering a 200-kilogram payload into a sun-synchronous orbit. A launch driven by SpaceX, on the other hand, will only cost a million dollars and will take place in under an hour.

Varda photon does not require a specific orbit for its mission, and it can be launched from a low earth orbit with relative ease, making it suitable for rideshare launches, in contrast to communication and image satellites, which require specific orbits.

Another factor that influenced Varda’s decision to partner with SpaceX was the fact that both of the company’s founders were personally acquainted with Elon Musk.

Also connecting them is the Founders Fund, an organization that invests in both Varda Space and SpaceX, as well as other space-oriented companies. What can be done in space that one can’t do on earth?

In microgravity, certain items can be made quite efficiently such as specialized semiconductors and bio-printed human organs. There’s also a super-efficient fiber optic cable called Z-bland. Aside from Varda space, NASA’s ISS has also been experimenting with such materials for quite some time.

They were also the first to send back payloads from space to earth in the Dragon spacecraft owned by SpaceX. It is astonishing how the dragon is the only spacecraft that can carry out this task effectively, even after ten years from its launch.

Varda intends to develop its own smart satellites with miniature re-entry capsules capable of returning up to 100 kilograms to earth.

Despite being launched with SpaceX’s Falcon 9, Varda has also purchased three of “Rocket Lab”’s spacecraft. Challenges in the way SpaceX and Varda are yet to decide the exact materials they will build.

For the mission to be scalable, they need to make a product that not only has a high resale value but also is easy to transport without contamination. Funding is also a crucial factor for Varda to be viable.

Aside from this, their primary challenge is developing a re-entry capsule that will allow the materials to be returned to earth. Re-entry is tougher than assembling hardware apparatus. Another problem is both processes and equipment will be exposed to a high level of radiation and will also have to withstand solar flare exposure.

However, Elon has constantly stated that in-space manufacturing has great potential for humanity. In the past years, there were two main issues that deterred space manufacturing: the lack of a dedicated platform and no soft return.

However, with this new partnership, these difficulties now do not stand in the way. As time passes, who knows we could also colonize the moon and mars which would reduce the need for intern-planetary transport significantly.

Varda Space Industry: At a glance, This company was founded less than two years ago with the aim of building a space factory. With the help of experience at Elon Musk’s SpaceX and constant backing by Peter Thiel’s Founder Fund, they have now managed to raise more than $50 million in a single year.

They are set to launch the beta phase of their project by the first quarter of 2023. This company is primarily based in Torrance, California, and was founded by Will Bruey and Delian Asparauhov.

As of 2021, this company packs a group of 16 best aerospace engineers, many of which are even ex-SpaceX employees. By the time of their first launch, the size is expected to go up to 40 as per their co-founders.

Their working principle is mainly targeted towards launching space-made products more quickly. Earlier, the International Space Station has also served as a platform for manufacturing products in space, but a dedicated space factory has never been set up.

Their first mission will launch on a ‘rideshare’ launch along with another SpaceX rocket, preferably a Falcon 9 due to its high payload threshold. As per Asparouhov, their company is different from other organizations that deal with in-space manufacturing because they focus on how their products add value to earth instead of only contributing to space.

There are “very huge” markets for things like semiconductors, fiber optic cables, and medications here on the ground, according to Asparouhov. So they plan on building things that are more specialized and otherwise would have had a negative impact on the environment.

They will be launching the first time with the Falcon 9 rocket. During its flight, the spacecraft will test space manufacturing technologies for up to three months. Then it is expected that the re-entry capsule will return to earth with between 40-60 kilograms of materials collected from the orbit.

The photon satellite will act as a mothership for each re-entry capsule. It also has solar panels, avionics, and batteries in it. They can also make some propulsion upgrades to create a satellite bus that facilitates inter-station payload transport.

SpaceX: At a glance, SpaceX is short for Space Exploration Technologies Corporation. It is now one of the best commercial space flight organizations in the world.

In the aspirations of reshaping the aerospace sector and making space travel more accessible, Elon Musk founded SpaceX in 2002. The Falcon 1 rocket, a two-stage, liquid-fueled craft, was the first to be launched by the corporation.

Lockheed Martin and Boeing, two of the most well-known and well-funded corporations in the aerospace industry, were among Falcon 1’s most expensive competitors. Reusable rockets are another area of focus for SpaceX.

They are also the very first commercial company to release a spacecraft (Dragon capsule) into orbit and have it safely return to earth. Given their astonishing achievements, it should come as no surprise that even foreign space agencies like Russia’s Roscosmos want to partner with SpaceX.

Now they work closely with NASA and provide most of the rockets for their missions. SpaceX is also planning on setting up an autonomous network of satellites to provide seamless internet connectivity through Starlink.

This project is known as Starlink. Recently, SpaceX has also announced their successor to Falcon 9 which would be called the BFR. Its payload would be ‘Starship’ which is a spacecraft designed for a wide array of use cases including fast transportation between cities on earth and colonies on Mars.

Verdict If I told you about a company like Varda 5 years ago, you’d probably think I have lost it. But now, thanks to enhanced technology, this dream has turned into a reality.

This collaboration has made it possible to create unique products that are only possible in space and deliver them economically. This plant is a technological marvel because of lower costs, improved regulations, and commoditized space hardware solutions.

Every time we think Elon has run out of creative ideas, he comes up with another one that blows our minds. This one, in particular, is a classic example of preferring smart work over hard work.

What do you think about this giant space factory? Do you think space manufacturing will really be able to make the earth a better place? Let us know your thoughts in the comments down below.

Thanks for reading till the end. Comment what’s your opinion about this information “Take A Look This Elon Musk’s INSANE New $3.2B Space Factory”.