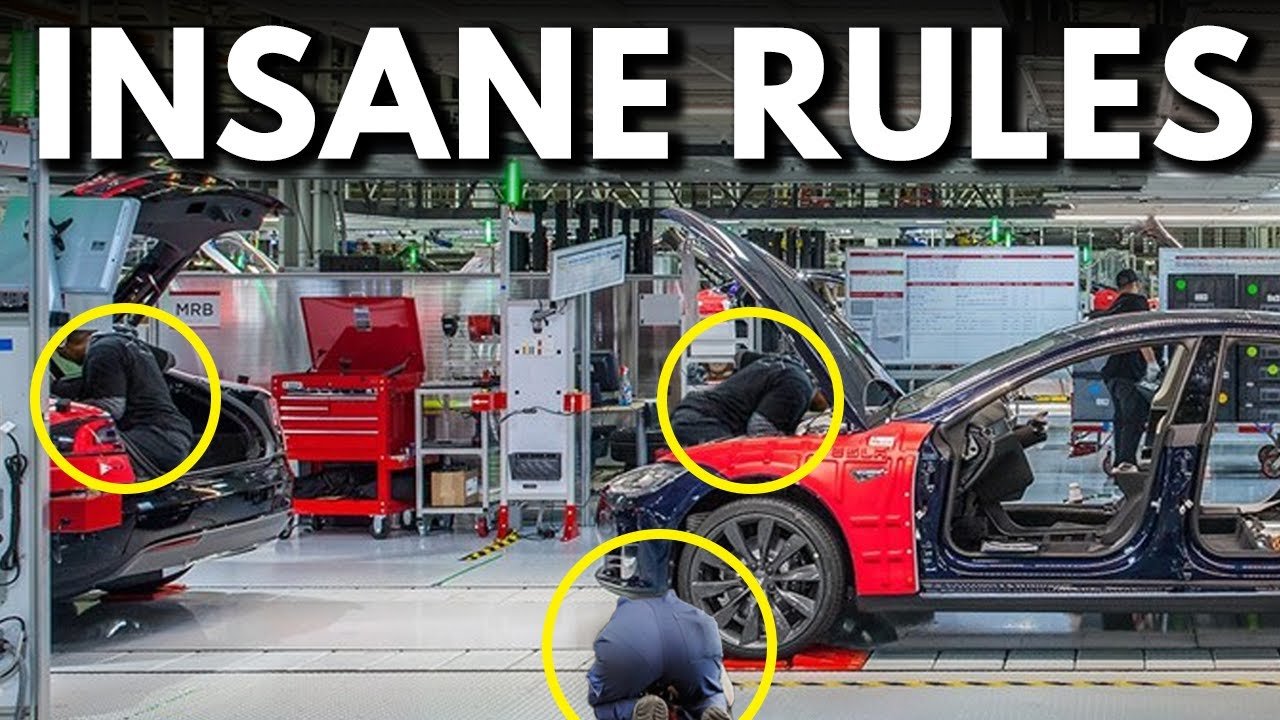 Elon Musk’s Insane Rules In His Tesla Giga Factory: Elon Musk has a hectic schedule and it’s not uncommon to hear rumors about him being alien or superhuman. What does it feel like to work for a man of this caliber? What rules has he put in place, so his underlings can catch up and be as productive as he is? Join us today, as we look at Elon Musk’s crazy rules in Tesla Factories.

Elon Musk has considerable stakes in The Boring Company, SpaceX, Neuralink, OpenAI, and Tesla. Musk was just an early-stage investor at Tesla, but his hands-on approach to the company and his brilliant ideas catapulted him to Product Architect and CEO.

Elon Musk helped Tesla through the final crisis of 2008; today, the company is the leading producer of electric vehicles globally. Tesla has a massive demand that it has to meet. The company produces as many as 6000 cars in one week.

Elon Musk isn’t the type of boss that gives orders blindly, expecting his employees to follow them. He is always present at his factories and puts in over 100 hours weekly.

No Big Meetings In Tesla

Elon Musk has made it a rule for his employees to avoid big meetings. Huge meetings are synonymous with big corporations. But in Tesla, if you want to hold a meeting, only invite people directly involved with the subject of discussion. Many companies try to get every department involved. Instead, they create a rowdy environment and waste everybody’s time.

Elon Musk has instructed his employees to avoid large conferences or congregations where value is not delivered to every audience member.

Leave That Meeting If You Feel Your Presence Is Not Needed.

If you work in a big corporation, you’ve probably been in meetings and have had to wonder what you were doing there. It is not uncommon.

In most corporations, the boss wants everyone to be present. These meetings could go on for hours, and they wouldn’t add value to some participants. Unless you are confident your presence in that meeting will bring value, you have no business there.

He has also emphasized how short meetings have to be. In his words, it is not rude to leave; it is rude to make someone stay and waste their time. Longer sessions tend to be less productive, the attention span of the participants will dwindle, and many of them would be tired of sitting in one spot.

This rule can also apply to our everyday lives; if it does not add value, don’t go there and always be time conscious. Avoid Frequent Meetings You can not have frequent meetings at Tesla unless the subject of the discussion is urgent. Holding meetings frequently reduces efficiency. Elon Musk believes that if the critical issue of a meeting has been resolved, the frequency of such meetings should reduce.

Most companies offer employee discounts as an incentive to ensure their workers use their products. Elon Musk has refused to do such.

If you are an employee at Tesla, you will pay the total price for any Tesla Model just like every other customer. This doesn’t mean that Tesla doesn’t care about its employees. Elon Musk feels it is fundamental to the integrity of Tesla as a company.

In a company-wide email, he confirmed that discounts on vehicles are against company policy, and anyone found in violation of this rule will have corrective actions taken against them. Don’t Use Acronyms or Workplace Jargon Acronyms are abbreviations formed by the initial letters of words, and they are essential to business-speak.

Elon Musk sent out an email to every employee titled Acronyms Suck. He ordered that everyone should immediately stop using acronyms at work, or else he would take drastic actions. He stated that acronyms could be confusing, difficult to remember, and sometimes contain unnecessary words.

He pointed that most employees don’t want to look dumb when they can not figure out the meaning of an acronym at meetings, so they just sit there in ignorance, wasting precious time. He was particularly angered by the acronym used to describe the explosion of SpaceX’s Falcon 9 rocket.

Whoever picked the acronym picked RUD which means, Rapidly Unscheduled Disassembly. That seems to be a bit over the top; they could have just said, Boss, our rocket exploded. Any average person would be annoyed if an acronym was used in that manner.

You Must Meet Your Quota At All Costs

Tesla always has a high demand. Past employees of Tesla have complained about their boss having no regard for sick leave or a life outside work. If you get employed to work in Tesla, you can say goodbye to 40 hours per week. You would be doing almost twice that.

Tesla has been failing to meet demands, and the company postpones launch dates often because of problematic production targets. Rumors say that Tesla factory workers are provided with free energy drinks to stay on their feet.

We can not verify the authenticity of this rumor, but it might not be far from the truth. Elon Musk once spent nights on the floor of his factory in Fremont, California. He didn’t want to waste time traveling from work back home to freshen up and change his clothes.

He wears the same clothes for up to five days sometimes. This isn’t a great work ethic, but for Elon Musk, every worker must complete his quota at all costs.

Likability is very important at workplaces. It helps create an environment where everyone can feel like part of a big family. Elon Musk values this trait more than anything else in his employees. He mentioned that during every hiring process, he looks for a positive attitude from that employee to be. Without a doubt, if you don’t like the people at your place, or if they don’t like you, your job is going to be pretty miserable.

Musk has admitted that he has fired some employees for being jerks, but he didn’t specify or mention names. The richest man in the world doesn’t care if you are one of the brightest minds on the planet. If you are rude to your colleagues, you have to leave.

Elon Musk drew from an ancient philosophy known as the old principle approach. Using this approach, he has laid down guidelines on how his employees should think. At a TED conference in 2013, he explained that things should always boil down to the most important fundamental truth, then reasoned up from that point.

Following this principle means employees can break down problems into core parts and affix a solution for each part. He uses this philosophy to examine managerial expenses. Managers were required to show how they applied the First Principles Approach to their expense claims. Any manager who could not fully understand the principle was fired immediately.

People who work with Elon Musk said that he is quick to interrupt; he is very intentional about his time and only sits down to listen when he thinks he might learn something. Elon Musk is a firm believer in having information pass through the shortest path necessary to execute the job.

Instead of having a piece of vital information go through the desks of various managers in the chain of command, he wants it to get to him if it has to. Any manager or superior officer found enforcing the chain of command on his subordinates in Tesla will have to find somewhere else to work.

Poor communication affects productivity; it also reduces efficiency. In a large corporation like Tesla, where the departments are endless, they might have issues with communication. Elon Musk’s rule of a disregard for hierarchy when it comes to information allows the free flow of information at all levels.

Instead of having to talk to a superior, who has to report to his superior and on and on, the information can be directly forwarded to the person who needs to act on it. Elon Musk just wants to make the right thing happen in Tesla; he wants it done in the fastest way possible. This might be why Tesla has overtaken several companies in its field.

Musk wants his employees to always apply logic to every scenario. He encourages people who work with him to disregard the rule if they feel it defies logic. In comparison, some employers might not like this because it sounds like a disregard for authority or insubordination.

Elon Musk gives his work free rein to do as they want if it is well within the confines of logic. If a company rule sounds too ridiculous to you, you can pretend it doesn’t exist. This does not allow you to disregard that rule that doesn’t allow employee discounts, as you would probably have to find work elsewhere if you do that.

What do you think about these rules? Is this something you could have worked with? Comment down below.

Thanks for reading till the end