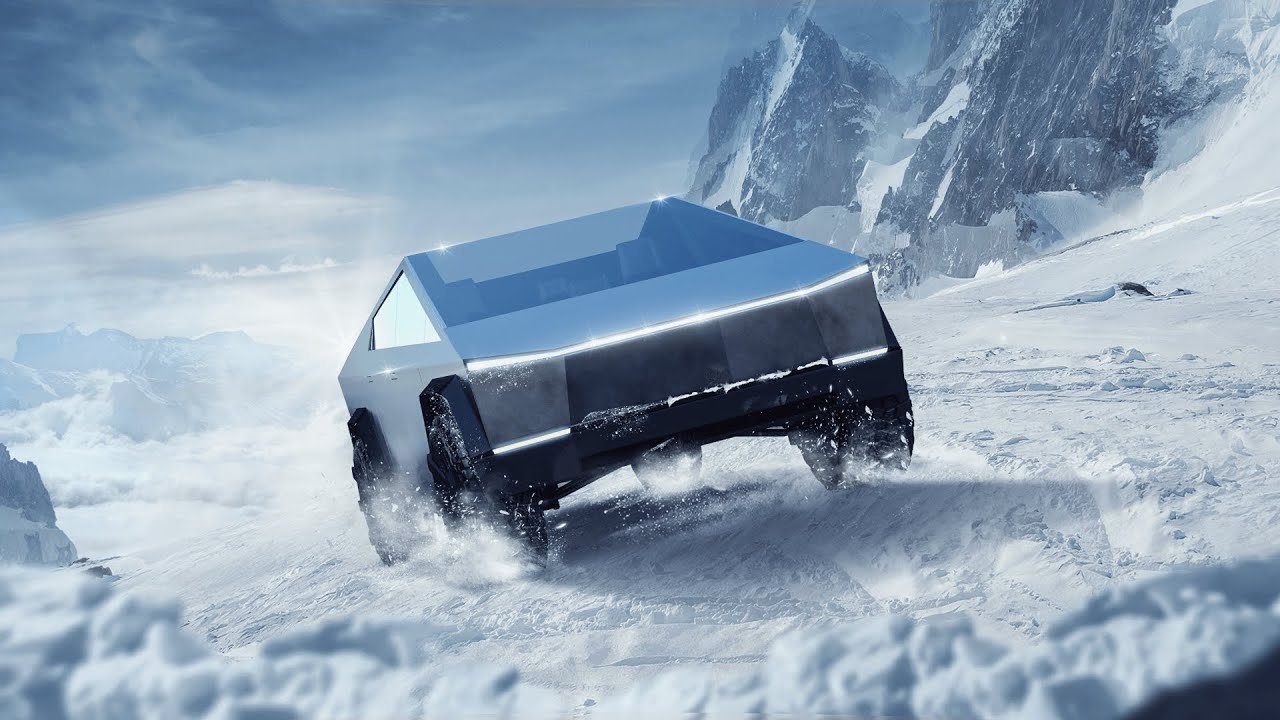 Tesla Cybertruck is Special, Here’s Why – Tesla Truck: When Elon Musk declares he’s building a new electric truck, the world takes notice. First envisioned back in 2013, it took over five years for the technology to catch up with Musk’s vision. In 2019, Tesla unveiled a teaser image of the colossal vehicle, with its name and design being inspired by the cyberpunk aesthetic of “Blade Runner.” With much speculation about the truck, it’s one of the most anticipated vehicles in the world.

Indeed, its ambition is to be a sustainable energy substitute for the roughly 6,500 fossil-fuel-powered trucks sold in the U.S. every day. So, what can we expect? In this article, I’ll explore everything we know about the Tesla Cybertruck, from its raw cyberpunk aesthetic to the horsepower under the hood. Let’s dive in.

The Tesla Cybertruck is huge, it dwarfs the Roadster and most other cars on the road. To power this hunk of metal and rubber, the truck comes in three options: single, dual, and tri-motor AWD or all-wheel drive.

The upcoming Ford F-150 Lightning, for example, is expected to reach 563 horsepower, not even close to the unbridled power of the Cybertruck. To quote the Cybertruck’s tagline: “Better utility than a truck with more performance than a sports car.” They aren’t kidding!

Search the internet for the Cybertruck, and you’ll find incredible images of the bulletproof windows. The truck’s exoskeleton is nearly impenetrable, forged from Ultra-Hard 30X Cold-Rolled stainless steel structural skin.

And, of course, the windows are made from Tesla’s armor glass. The glass is already ultra-strong, but it can absorb and redirect more force when combined with a polymer-layered composite, including bullets.

And being designed by Tesla’s own Franz von Holzhausen, it captures the world’s attention, which was probably the intention. It’ll provide maximum protection to passengers and eliminate any dents, damages, and long-term corrosion you’d expect from your standard truck.

This isn’t just a truck; it’s Elon Musk’s very own Batmobile. It’s probably the safest vehicle on the market by some margin.

Much has been said about the vehicle’s outer aesthetic. What’s less appreciated is the minimalism of the interior. Expect a 17-inch center display and seating for six across two bench seats, with the front middle seat being foldable. The back of the seats also resemble the same angular and geometric style as the body.

There’s no steering wheel; rather, there’s a racing car style steering yoke positioned in a dashboard resembling marble. It’s not actually marble, that would weigh far too much. Instead, it’s a paper composite made from paper, wood-based materials, natural wood pigments, and non-petroleum-based resins.

Occupants can expect plenty of room, given the vehicle’s sheer size. So, long trips won’t be claustrophobic, even with a full house of six people. But, when there are five or fewer, the front middle seat can be transformed into an arm-rest.

Gone are the days when consumers worried about range issues with an electric vehicle. The Tesla Cybertruck can comfortably manage a full day’s worth of driving. The tri-motor Cybertruck lasts 500 miles between charges.

The mid-spec dual-motor model can last 300 miles. Even the rear-wheel-drive single motor truck will do 250 miles. There’s also a planned quad-motor model, details remain scant. Though, it’s unlikely to be released before 2024.

Once again, for comparison, the Ford F-150 Lightning manages 230 to 320 miles of range, depending on the model. The Tesla Cybertruck is quite literally miles ahead of its competition.

Perhaps most exciting is the ubiquitous inclusion of Tesla Autopilot. The autonomous user interface is amongst the most advanced driver-assistance systems globally, akin to Level 2 vehicle automation.

Its features include lane centering, traffic-aware cruise control, automatic lane changes, semi-autonomous navigation, self-parking, and the ability to summon the car from a garage or a parking spot. As I said, it’s Musk’s Batmobile. In addition, we’ve seen glimpses of the new UI.

As expected, it’s darker-themed, going with the futuristic sharp-edged feel of the vehicle itself. It’s been referred to as origami with stainless steel, and that’s definitely present in the display.

To power such a beastly machine, you need power, and lots of it. For electric trucks, that means using the same 4680 battery cells and structural battery packs as were seen in Model Ys.

They’ll be produced at Tesla’s Gigafactory in Austin, Texas. According to recent calculations, the Cybertruck will need a 200-kilowatt hour battery to achieve a 500-mile EPA range rating.

It is why Tesla is purchasing colossal quantities of lithium annually to supply its needs for Cybertruck’s advanced lithium-ion batteries.

According to estimates, the charge time for a Tesla Cybertruck is expected to be one hour and 30 minutes. To squeeze a little extra juice out of the colossal vehicle, the EV leader is including an optional solar roof. Musk claims the solar roof option will add 15 miles of range per day.

It’s been something he and his team have worked on for years. The Tesla engineers attempted to include solar cells on Model 3, but concluded it wasn’t worth the time. With Cybertruck’s flat roof design, there’s optimal space to include a large solar panel, including a folding panel over the trunk.

In fact, the trunk bed cover is Tesla’s own patented design. It’s a tremendous step forward for the industry. While it’s not a huge amount of power, it is a beneficial addition. Expect to pay an additional $2,500 to $4,000 for the solar roof.

The Cybertruck isn’t light, nor is it small. Nevertheless, with a rapid top speed of 130 miles per hour, it can achieve the feats of acceleration unparalleled by other electric trucks. The Tri-Motor model, as mentioned, does 0 to 60 miles per hour in less than 2.9 seconds.

Meanwhile, the single motor model does it in less than 6.5 seconds and the dual motor in less than 4.5 seconds. In short, this is one fast truck, capable of mind-bending acceleration while maintaining stunning maneuverability. It raises the question just how fast will the quad motor model be?

It’s not inconceivable to expect 1,000 horsepower, meaning the truck will reach even faster top speeds than current planned models. Even a decade ago, it was unheard of for heavy-duty trucks to reach such speeds, let alone an electric truck.

With all that power, the Tesla Cybertruck’s base model can tow 7,500 pounds. The dual-motor mid-level model manages 10,000 pounds; meanwhile, the tri-motor truck hauls up to 14,000 pounds.

It’s an astonishing rating, with the tri-motor model offering an additional 3,000 pounds of towing capacity compared with the Ford F-150. That said, owners should factor in that the truck’s range will be cut in half when towing at maximum capacity.

In one interesting concept shot, Tesla includes a Cybertruck-style trailer being pulled along. Inside, the graphics show a whole camping pod, complete with a bed, fridge, sofa, shower, and kitchen.

It’s the ultimate glamping experience. When we can expect this futuristic Cybertruck camper is anyone’s guess, but it’s certainly caused a stir in the industry.

Trucks almost always face a conundrum when it comes to suspension. A stiff suspension is needed for heavy loads but is detrimental to ride quality. To balance capability and comfort, Tesla has developed an active air suspension system.

The suspension will self-level to account for the payload using its in-built software. We’ve seen such systems before, in the Ram 1500 and GMC Sierra 1500 Denali, but never like this. In fact, the adjustable air suspension system will be linked to Tesla’s autopilot for automatic adjustments.

It could make the Tesla Cybertruck the most adaptable pickup truck ever. But what do you think? Is this a game-changing electric truck set to change the market forever? Or do you think Tesla’s Cybertruck is a step too far? It’s certainly unlike anything that came before. Let us know in the comments below!

Thanks for reading till the end. Comment what’s your opinion about this information “Tesla Cybertruck is Special, Here’s Why – Tesla Truck“.

4 thoughts on “Tesla Cybertruck is Special, Here’s Why – Tesla Truck”