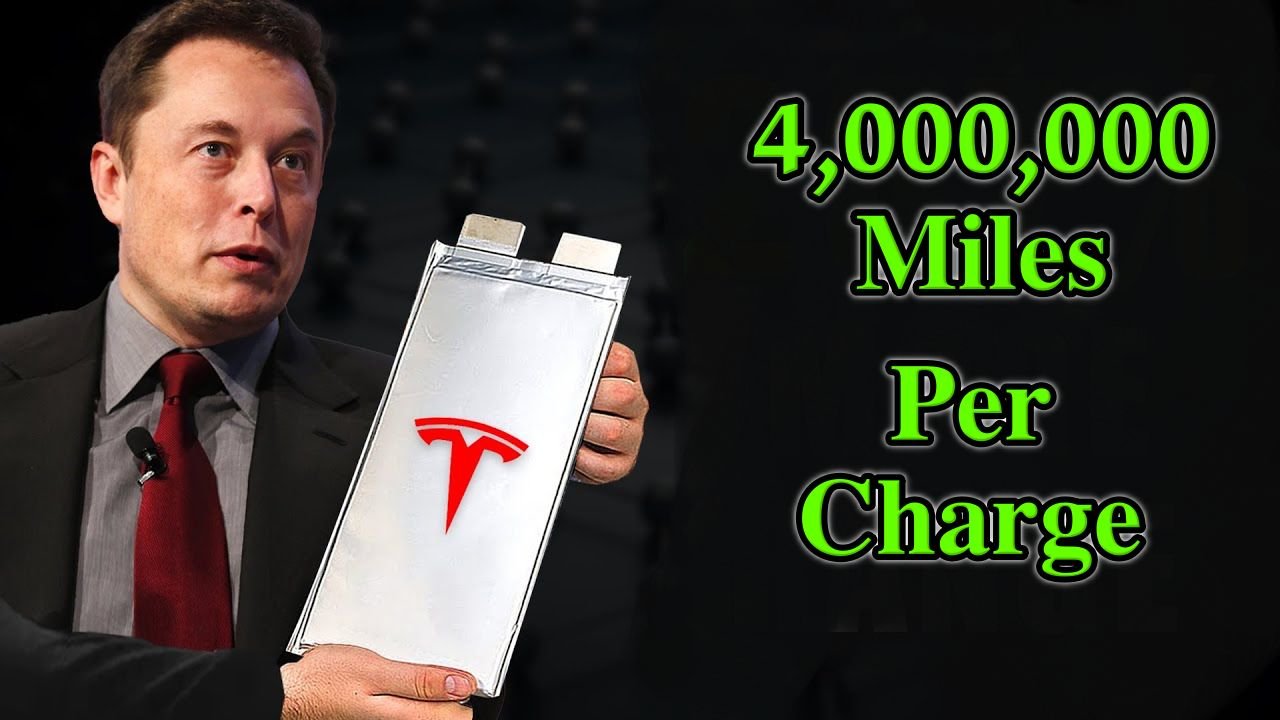 Tesla’s New Battery Pack Revealed That Could Last For 4,000,000 Miles: One of the main concerns with EVs is that the batteries will need to be replaced after a few years, which will be costly. After all, in as little as three years, your smartphone battery will have seen better days.

Elon Musk, on the other hand, promised last year that Tesla’s vehicles’ batteries would eventually be able to travel 1 million miles in their lifetime. However, after demonstrating batteries that could potentially outlive most humans, a Tesla researcher is getting ready to put this idea to rest once and for all.

So today we’ll take a look at the Tesla battery, which is said to have a range of 4 million miles! Isn’t that fantastic news?! So, let us take a look.

Electric transportation is being touted as one of the ways to achieve emission targets that countries have set for themselves as the world looks to reduce carbon emissions. Countries must transition to renewable energy sources, while electric vehicle manufacturers must ensure that the vehicles themselves do not become a source of concern.

Tesla has kept a secret for the past four and a half years, but a recent study disclosed it. The truth is that they’ve been working behind closed doors on a battery that’s lightyears ahead of anything currently available, with a lifespan of 100 years or four million miles before needing to be replaced!

Not to mention the possibility of much lighter battery packs as a result of it. So, what exactly did they do to accomplish this? Is it possible to buy a Tesla with a four-million-mile range in the near future?

If you’re a Tesla fan, you should be familiar with Jeff Dahn and his team of researchers at Dalhousie University in Halifax, Nova Scotia. Dahn is primarily responsible for all of the buzz surrounding the “million-mile” electric vehicle battery, which sounds incredible but isn’t out of reach, as it turns out.

Tesla-affiliated researchers recently published a paper about an energy-dense electric vehicle battery that could last a hundred years. Dahn also gave a presentation about a “4-million-mile battery” at the international battery seminar in Orlando, Florida, in March.

Prior to the paper’s release this month, this included some of the findings. He had previously promised a “million-mile battery,” and since October 2017, he has been testing cells based on his modified chemistry.

They appear to be in good shape, as only 5% degradation has been observed after 4.5 years of continuous cycling at room temperature. This means they could last 4 million miles before needing to be replaced in an electric vehicle.

The switch from polycrystalline to single-crystal cathodes, which do not break down as quickly during the charge-discharge cycle, is one of the reasons for the increased longevity.

These are more expensive than LFP or NMC 811, but they have the highest density and longest range. Nickel, cobalt, manganese, and aluminum are all used as cathodes in NCMA chemistry, but nickel is used the most.

The NMC 532 chemistry that Dahn has been experimenting with promises to be a significant step forward in battery technology. Cars, on the other hand, do not need to last 100 years or travel 4 million miles.

In practice, 4-million-mile batteries will enable applications like vehicle-to-grid, which will increase the rate of charge-discharge cycling. However, they are most likely to be useful for static energy storage in homes and grid buffering capacity from intermittent renewable energy sources.

Batteries, according to hydrogen enthusiasts, are just a stopgap until Fuel Cell Electric Vehicles and hydrogen storage systems become mainstream. However, given the rapid advancements in battery technology, hydrogen is likely to be too little, too late when it does arrive in sufficient quantities for transportation.

Batteries will have solved all of the problems posed to them in just a few years, thanks to technologies like those developed by Dahn, as well as lithium sulfur developments from Theion and ultra-rapid charging technology from StoreDot.

The mission to develop an ultra-long-lasting battery could reduce manufacturing costs and the electric vehicle industry’s carbon footprint significantly. Current Tesla models’ batteries are expected to last for around 200,000 miles (20+ years) before their charge capacity begins to drop by more than 20%.

By creating a battery that can last longer than the car, it can be reused in new models, possibly multiple times. According to the paper, electrolytes containing lithium salt have an excellent lifetime at high temperatures, far exceeding that of conventional LiPF6 electrolytes.

“Compared to LFP cells, NMC cells, particularly those balanced and charged to 3.8V, have better coulombic efficiency, less capacity fade, and higher energy density, and are expected to have lifetimes approaching a century at 25C.”

Tesla CEO Elon Musk had been expected to announce a “million-mile battery” at the company’s Battery Day event in September 2020, but instead a plan to transition from cobalt to nickel was unveiled.

While this improves sustainability and eliminates concerns about ethical cobalt sourcing, it also provides insight into the battery development path that Tesla researchers are now taking. Since 2017, Dahn has been experimenting with a lithium air battery with an unusual cathode.

During that time, it was charged and discharged over and over again, 24 hours a day, seven days a week, for four and a half years! Most Li-ion batteries would have ended ages ago by this point, but Dahn’s Lithium air battery had only lost 5% of its capacity.

Dahn calculates that it could last for the same number of charges as driving a Tesla four million miles, or about 100 years of typical driving, based on the data. This type of battery has the potential to revolutionize electric vehicles.

Electric trucks could run at full capacity and cover hundreds of thousands of miles per year without having to worry about astronomically high battery replacement costs.

Because renewable energy storage can last for much longer, solar and wind power can be adopted at a lower cost and with less environmental impact. Electric vehicles (EVs) can be used as energy storage devices for home solar without risking battery damage.

EVs will become even more environmentally friendly as electronic waste decreases, and vehicle turnover will decrease dramatically as cars begin to last decades rather than years. But keep in mind that lithium air batteries are still in their early stages.

Batteries could become much lighter and smaller if Dahn can develop this technology and push it to its theoretical limits. Consider a Tesla Model 3 with a 100 kilogram battery pack; normally 480 kilograms, that can still travel 300 miles on a single charge.

Commercial electric planes will become far more efficient as a result of the weight savings, and ultra-lightweight, high-performance EVs may emerge. Tesla currently produces and uses a lithium-ion battery known as lithium iron phosphate (LFP), which has a higher energy density and allows for longer charge intervals.

The researchers’ nickel-based alternative could theoretically overcome the energy density and endurance limitations of such batteries while providing a significantly longer life cycle. The goal of developing a long-lasting battery could reduce production costs and the electric vehicle industry’s carbon footprint significantly.

The batteries in current Tesla models are expected to last around 320,000 kilometers, or more than 20 years, before their charging capacity drops by more than 20%. Including this battery in Tesla vehicles, that could last 100 years, could be a game-changer for the company.

However, as you may be aware, Dahn and other researchers have begun to examine how to make the dream a reality. What’s your thoughts on this battery? Let us know in the comment section below.

Thanks for reading till the end. Comment what’s your opinion about this information “Tesla’s New Battery Pack Revealed That Could Last For 4,000,000 Miles“.