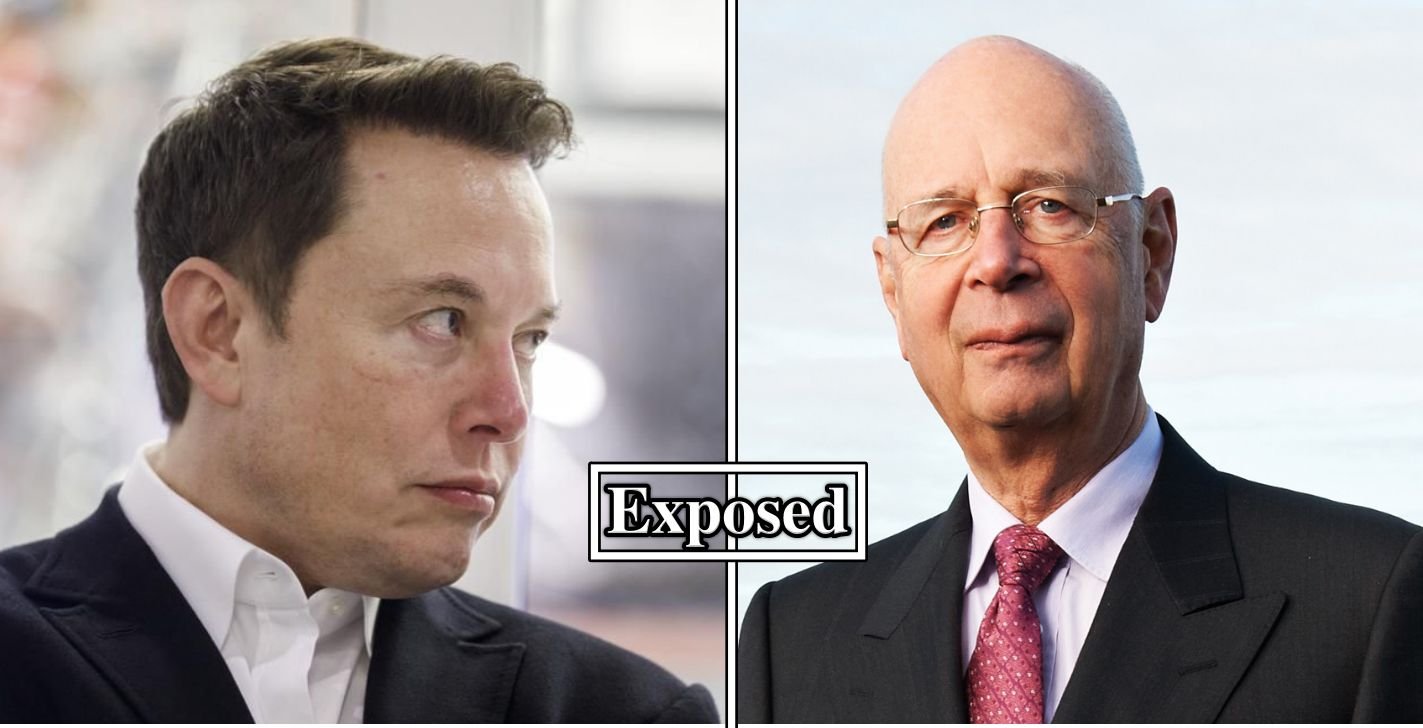 Elon Musk Just Exposed Klaus Schwab’s CORRUPTION: Elon Musk has faced numerous challenges in his life, but he may be set to face HIS GREATEST CHALLENGE YET! After Tesla was removed from the S&P 500 ESG index, Elon Musk went to Twitter and criticized the mechanism created to assess a firm’s sustainability or investment.

He then proceeded to EXPOSE Klaus Schwab and the world economic forum. And this situation has escalated!

The S&P 500 removed Tesla from its ESG Index as part of an annual update to the list. Meanwhile, Apple, Microsoft, Amazon, and even the oil and gas conglomerate Exxon Mobil remained on the list. The S&P 500 ESG Index ranks and successfully recommends firms to investors based on environmental, social, and governance data.

Its criteria include hundreds of data points for each organization about how enterprises influence the environment and treat stakeholders other than shareholders, including consumers, workers, vendors, partners, and neighbors.

The index was updated on May 2, and a spokeswoman for the index explained why in a blog post published Wednesday.

It stated that Tesla’s “lack of a low-carbon strategy” and “codes of business conduct,” as well as racism and terrible working conditions recorded at Tesla’s Fremont, California facility, had an impact on the score.

Tesla’s handling of a National Highway Transportation Safety Administration inquiry also impacted its grade. While Tesla’s declared purpose is to speed the world’s transition to renewable energy, the company settled with the EPA in February this year after years of Clean Air Act breaches and failing to measure its emissions.

Last year, Tesla rated 22nd on the U-Mass Amherst Political Economy Research Institute’s Toxic 100 Air Polluters Index, trailing Exxon Mobil, which ranked 26th. (The index is based on data from 2019, which is the latest available.)

Tesla also stated in its first-quarter filing that it is being investigated for its waste management practices in the state of California and that it was fined in Germany for failing to satisfy the country’s “take back” responsibilities for old batteries.

Meanwhile, the California Department of Fair Employment and Housing has filed a lawsuit against Tesla for anti-Black harassment and discrimination at its Fremont auto facility.

According to the agency, it discovered evidence that Tesla habitually held Black employees in low-level positions, assigned them to more physically demanding and risky jobs, and retaliated against them when they complained about racial comments.

Tesla was also found to have participated in unfair work practices by the National Labor Relations Board last year. “While Tesla may be playing its part in taking fuel-powered cars off the road, it has fallen behind its peers when examined through a wider ESG lens,” the S&P representative noted.

Tesla CEO Elon Musk complained about the index on Twitter on Wednesday morning, where he has over 90 million followers, stating S&P Global Ratings had “lost their integrity.” Musk has stated, “I am increasingly convinced that corporate ESG is the Devil Incarnate.”

Tesla wrote in a subsequent corporate impact report: “Current environmental, social and governance (ESG) reporting does not measure the scope of positive impact on the world.

Instead, it focuses on measuring the dollar value of risk/return. Individual investors — who entrust their money to ESG funds of large investment institutions — are perhaps unaware that their money can be used to buy shares of companies that make climate change worse, not better.”

In that study, Tesla argued that other manufacturers might get higher ESG ratings even if they just reduced greenhouse gas emissions somewhat and continued to manufacture internal combustion engine vehicles. Tesla shares fell more than 6% on Wednesday, while the market as a whole fell. This year, the company’s stock has dropped by more than 30%.

The World Economic Forum (WEF) is a yearly gathering of world leaders from politics, economics, academia, and civil society.

This year’s event was held from January 17 to 20 in the Swiss resort town of Davos. The core subjects of the WEF investigated the numerous economic, social, political, and technical concerns that influence worldwide societies. “The Fourth Industrial Revolution” was one of the most discussed subjects.

Elon Musk’s work at Tesla and SpaceX is focused on creating a sustainable future for our world by slowing climate change and lowering human labor through automation. Here are some key points from his WEF presentation that you might find interesting.

The World Economic Forum is an annual gathering of the world’s most influential politicians, corporate executives, academics, and members of civil society. Every year, it is held in Davos, Switzerland, and is the most significant gathering for “the global elite.”

This year’s agenda included a debate about our planet’s future and what it would take to survive. Elon Musk mentioned climate change, and he believes that solar alone will not suffice to tackle the problem.

While he feels solar is a useful source of energy, he also believes we should employ other sources such as wind and geothermal energy. – The term “Fourth Industrial Revolution” refers to the present surge of digital technology that has the potential to alter the way people live, work, and interact with one another.

Elon Musk believes that this transformation would worsen economic inequality and societal unrest. This revolution is distinguished by rapid technological advancement as well as physical and virtual reality innovation.

The World Economic Forum sponsored a panel discussion with specialists on automation, sensors, machine learning, robots, and 3D printing. These experts were asked how they believed the revolution will impact our lives and the global economy.

Elon Musk stated: “It’s not just about what office you go into every day. It’s about what kind of joy you’ll be able to find.” He believes that technology will replace humans more frequently than we realize.

He is especially concerned about the impact of the revolution on individuals who are economically poor or otherwise marginalized in society. He continued, “We shouldn’t feel like we’re fighting this future, but we should recognize its potential benefits as well as its potential cost.”

At the WEF, the successful entrepreneur discussed his own experiences and opinions on a variety of themes. Elon Musk spoke at the WEF on how humanity has to work together to form some type of global governance.

He claimed that this would be required to meet the present issues faced by climate change and artificial intelligence. In answer to the question, “Is there anything you believe will cause humanity to become post-human”? He replied, “I think we’ll have some pretty interesting conversation.” he said.

He was also asked to name one of the most “urgent” issues confronting society today. Elon Musk said, “It depends on what we call our reality.” This year’s Davos gathering has been dominated by debates about climate change, global trade, and digitization.

However, EloMusk’s speech has captured the majority of people’s attention. It’s not every day that an entrepreneur sets forth a daring strategy for mankind in front of 3,000 global political and economic leaders!

The world is shifting from globalization to hyper-localization, and products and services will become less reliant on global markets. Advanced manufacturing and smart infrastructure will allow countries to compete effectively in the Fourth Industrial Revolution.

Leonardo Dicaprio, Matt Damon, Bono, Bill Gates, and Angelina Jolie have all attended in the past. The “Great Reset” is the topic of the 2021 Davos. Davos has seen both accomplishments and protests over its existence.

For example, considering that the WEF has traditionally been a major advocate of globalization, anti-globalization activists have protested on various occasions. According to the World Economic Forum, concern about the world’s social and economic prospects is growing.

The World Economic Forum advises that “the world must act jointly and swiftly to revamp all aspects of our societies and economies, from education to social contracts, or a great reset of capitalism,” to reach a better outcome.

The Great Reset debate began in late May when the World Economic Forum announced plans to meet world leaders to address climate change and economic recovery.

According to Klaus Schwab, the Society Economic Forum’s Founder and Executive Chairman: “The pandemic represents a rare but narrow opportunity to reflect, reimagine, and reset our world.”

According to the WEF, the most pressing cause for a reset is the COVID-19 problem, which has major long-term implications for economic development, public debt, employment, and human well-being.

Some fear that if these issues are not addressed, the world will become less sustainable, less egalitarian, and more vulnerable. The Great Reset agenda would consist of three major components.

The first includes directing the market toward more equitable results, such as adjustments to wealth taxes and new intellectual property, trade, and competition restrictions.

It is proposed that governments increase cooperation in tax, regulatory, and fiscal policies and foster a “stakeholder economy.” Furthermore, they imply that in times of substantial public debt, governments have strong incentives to undertake such initiatives and enact long-overdue reforms.

The second component would develop a common purpose of equity and sustainability, for example, through large-scale expenditure initiatives to create a more resilient, fair, and sustainable system. Building green urban infrastructure might be one of the measures.

In the United States, economic disparity in terms of disposable income and consumption remains significant. The expenses of the COVID-19 recession are borne disproportionately by low-income communities, and others argue that climate change is also a major worry.

The fourth goal would be to capitalize on the Fourth Industrial Revolution’s advances, notably tackling health and social concerns. However, there are several significant points of dispute.

Some believe that the WEF’s ideas equate to global socialism, even though Davos is widely attended by billionaires, Fortune 500 CEOs, other influential individuals, and large industrial organizations.

He claims that “the Australian taxpayer spends a fortune sending top politicians and public servants year in year out in luxury style to attend the WEF which has a plan involving replacing shareholders of big companies with stakeholders, who happen to be left-wing bureaucrats and climate change, zealots.”

Most recently, Musk addressed the American economy, expressing concern about the future given the present leadership in Washington. Not only were his statements criticized, but he also singled out the ESG index after Tesla was eliminated.

“ESG is a scam. It has been weaponized by phony social justice warriors.” Along with criticizing the ESG index, the Biden administration, and the World Economic Forum, Musk appears to be on a tear, asking why the Department of Justice hasn’t released the client lists of Jeffrey Epstein and Ghislaine Maxwell.

Musk has not remained silent in the face of many of America’s ills. Not long ago, the billionaire infuriated Democrats by proposing to buy Twitter for a whopping $44 billion. The Democrats soon debated the risks of allowing a single individual to run a whole social media platform.

Very similar to Mark Zuckerberg. Musk’s speech at the World Economic Forum in Davos, Switzerland, demonstrated his future vision for the world. He contends that humanity’s future is closely intertwined with the end of the world. This is why we must develop sustainable energy sources and discover methods to live in peace with nature.