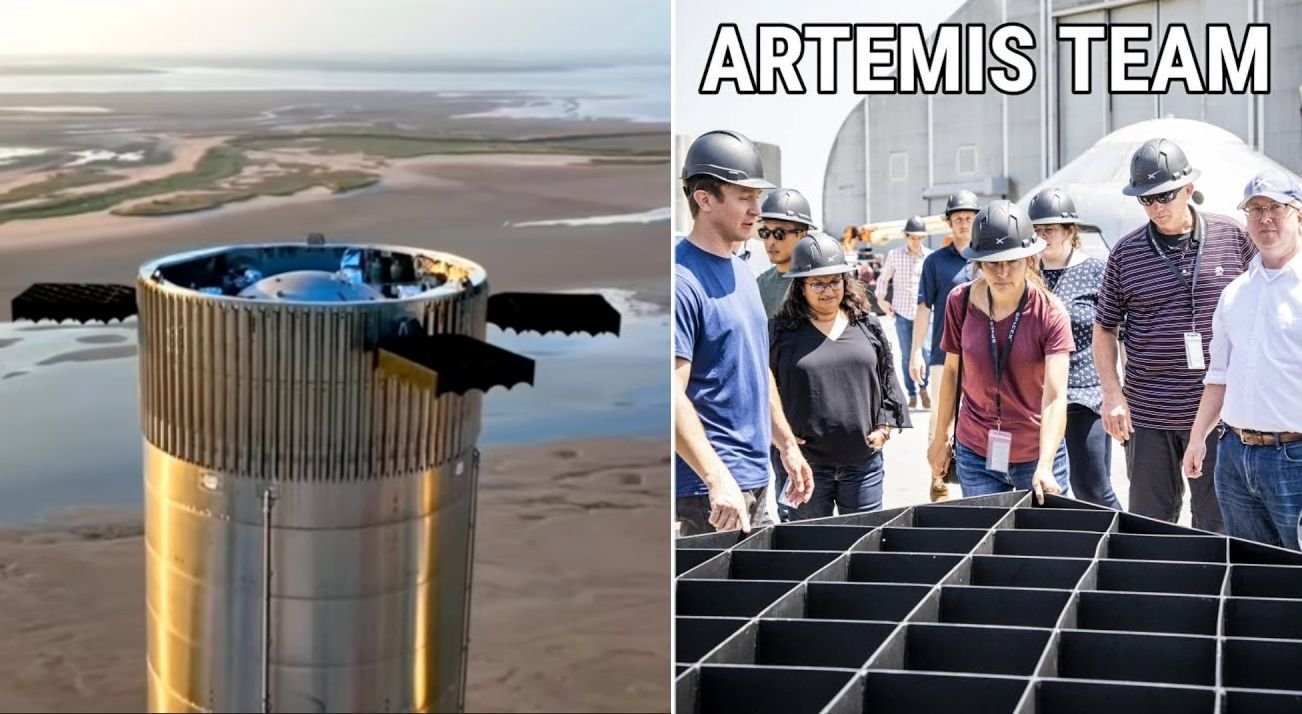 NASA Artemis ENGINEER Visited STARBASE For Starship Hardware Check: NASA awarded a contract to SpaceX to develop a lunar-optimized Starship Human Landing System (HLS) to land astronauts on the Moon as part of the Artemis program that will launch the first woman and next man to the Moon.

The first human landing systems in history to be developed by U.S. industry will take astronauts from lunar orbit to the surface and back again. It will be humanity’s first time back to our closest celestial neighbor in half a century.

SpaceX is working to develop the two-stage Starship vehicle, which consists of a powerful Super Heavy rocket booster that will propel the spacecraft to orbit. As part of a NASA program that will select one or two commercial crewed Moon landers, SpaceX is busy testing Starship and prototyping hardware.

For its lunar lander design, SpaceX has pitched a variation on its Starship spacecraft. SpaceX is already on its 15th Starship prototype and has been regularly testing the craft.

Many of the prototypes have so far crashed and exploded, with SN10, its 10th Starship prototype being the first to land (though it exploded shortly after landing). The company is preparing to conduct the first-ever orbital flight test this year that will enable engineers to speed up the spacecraft’s development.

SpaceX has been working closely with NASA experts during the HLS base period of performance to inform its lander design and ensure it meets NASA’s performance requirements and human spaceflight standards.

“SpaceX hosted NASA leadership at their Starbase facility in Boca Chica, TX, for an update on Starship, the human landing system that will carry the next American astronauts to the Moon on Artemis III,” the agency announced on June 10.

NASA shared a photo of representatives checking out the Raptor V2 engines and Super Heavy’s giant grid fins. The rocket will be equipped with four grid fins located at top used to guide the vehicle when it returns from space.

SpaceX to continue development of the first commercial human lander that will safely carry the next two American astronauts to the lunar surface. At least one of those astronauts will make history as the first woman on the Moon.

Another goal of the Artemis program includes landing the first person of color on the lunar surface. SpaceX’s proposal is certainly a unique one, with Starship being no less than several times taller and heavier than both its prospective competitors.

The agency’s powerful Space Launch System rocket will launch four astronauts aboard the Orion spacecraft for their multi-day journey to lunar orbit. There, two crew members will transfer to the SpaceX human landing system (HLS) for the final leg of their journey to the surface of the Moon.

After approximately a week exploring the surface, they will board the lander for their short trip back to orbit where they will return to Orion and their colleagues before heading back to Earth.

The firm-fixed price, milestone-based contract total award value is $2.89 billion. “With this award, NASA and our partners will complete the first crewed demonstration mission to the surface of the Moon in the 21st century as the agency takes a step forward for women’s equality and long-term deep space exploration,” said Kathy Lueders, NASA’s associate administrator for Human Explorations and Operations Mission Directorate.

“This critical step puts humanity on a path to sustainable lunar exploration and keeps our eyes on missions farther into the solar system, including Mars.” “This is an exciting time for NASA and especially the Artemis team,” said Lisa Watson-Morgan, program manager for HLS at NASA’s Marshall Space Flight Center in Huntsville, Alabama.

“During the Apollo program, we proved that it is possible to do the seemingly impossible: land humans on the Moon. By taking a collaborative approach in working with industry while leveraging NASA’s proven technical expertise and capabilities, we will return American astronauts to the Moon’s surface once again, this time to explore new areas for longer periods of time.”

SpaceX’s HLS Starship, designed to land on the Moon, leans on the company’s tested Raptor engines and flight heritage of the Falcon and Dragon vehicles. Starship includes a spacious cabin and two airlocks for astronaut moonwalks.

The Starship architecture is intended to evolve to a fully reusable launch and landing system designed for travel to the Moon, Mars, and other destinations.

The HLS award is made under the Next Space Technologies for Exploration Partnerships (NextSTEP-2) Appendix H Broad Agency Announcement (BAA).

In parallel with executing the Appendix H award, NASA intends to implement a competitive procurement for sustainable crewed lunar surface transportation services that will provide human access to the lunar surface using the Gateway on a regularly recurring basis beyond the initial crewed demonstration mission.

The Artemis III mission is currently set to occur sometime in the year 2025. Before launching humans, they will perform a pair of uncrewed demonstration spaceflights to the Lunar South Pole, designated as Artemis I and Artemis II.

NASA’s return to the Moon will make use of SpaceX’s Starship HLS, as well as the Space Launch System (SLS) rocket and Orion capsule. Four lucky astronauts will make history on the Artemis III mission to the Moon. They will lift off aboard the Orion atop the SLS rocket from the Kennedy Space Center in Florida.

Orion will dock to a Starship in lunar orbit and two astronauts (a woman and a man) will transfer to the spacecraft. Starship will land the brave duo on the lunar surface, while the other two astronauts remain inside Orion orbiting the Moon to supervise Starship’s landing and overall week-long lunar exploration mission.

NASA’s SLS and Orion are actively under development in Florida; It is expected to conduct a debut flight in August 2022. SpaceX is expected to also conduct its first test flight to orbit sometime this year, the company is pending regulatory approval to launch from Boca Chica Beach.

The U.S. Federal Aviation Administration (FAA) performed an environmental assessment of the Starbase launch site that is scheduled to be completed by June 13th. With NASA’s Space Launch System rocket, Orion spacecraft, HLS, and the Gateway lunar outpost, NASA and its commercial and international partners are returning to the Moon for scientific discovery, economic benefits, and inspiration for a new generation.

Working with its partners throughout the Artemis program, the agency will fine-tune precision landing technologies and develop new mobility capabilities to enable exploration of new regions of the Moon.

On the surface, the agency has proposed building a new habitat and rovers, testing new power systems and more. These and other innovations and advancements made under the Artemis program will ensure that NASA and its partners are ready for human exploration’s next big step—the exploration of Mars.

Thanks for reading till the end. Comment what’s your opinion about this information “NASA Artemis ENGINEER Visited STARBASE For Starship Hardware Check“.