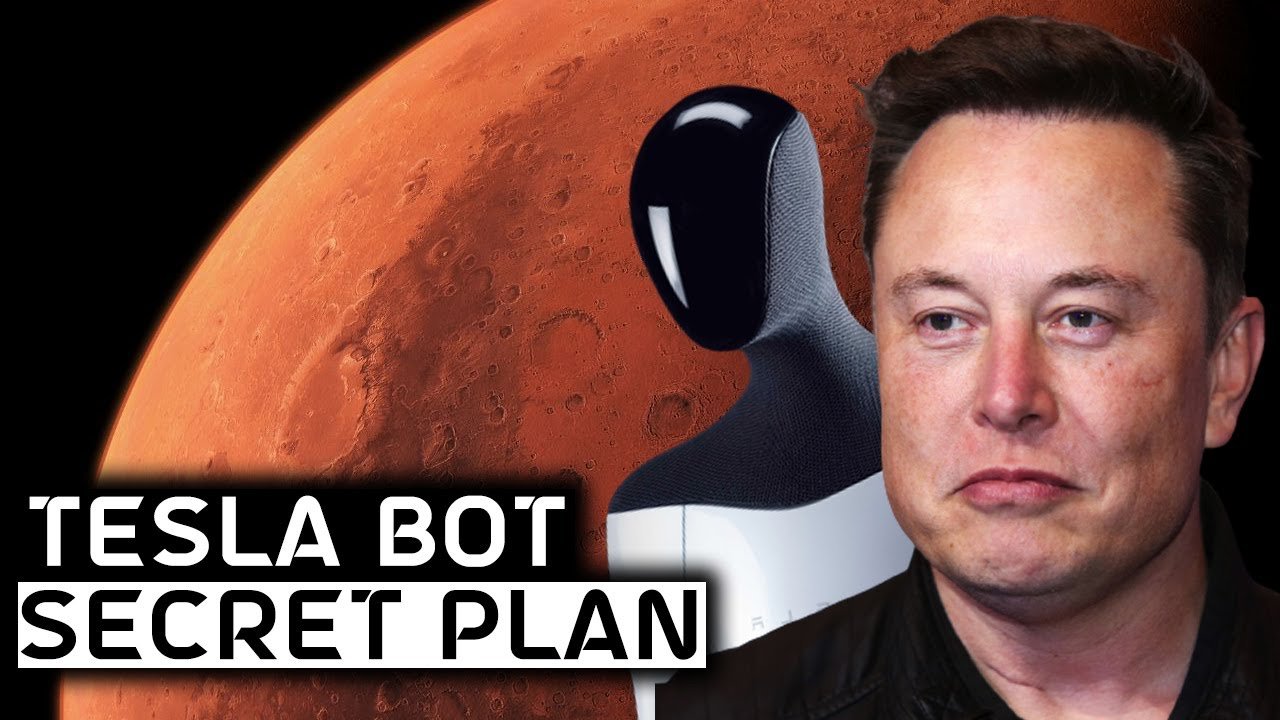 [su_dropcap style=”flat” size=”4″]T[/su_dropcap]Tesla’s Secret Plan Behind Tesla Bot – Elon Musk: Humanoid Robots are something that always fascinated pop culture. We have seen countless versions of these in movies and shows. It is not the first time a humanoid robot is being announced. Then what is this hype about the Tesla Bot? Is it because it has Tesla attached to it?

In today’s article, let’s look at Tesla’s secret plan behind the Tesla Bot. Tesla Tesla is one of the most valuable car makers in the world. They are American manufacturers of cars, car batteries and home power stations.

Elon Musk, the mighty billionaire, had long been interested in the possibilities of electric vehicles, and in 2004 he became one of the major funders of Tesla Motors (later renamed Tesla).

In 17 years from the foundation, its growth is unrivalled and shows no signs of slowing down. The electric vehicle giants offer fully automotive self-driving cars equipped with the latest artificial intelligence and autopilot technologies.

However, the company is not only working on building energy-efficient, affordable electric vehicles. They are researching the materials, batteries and many more. Even the casual observers are well aware of Tesla’s something called the master plan, which is a three-part strategy to make affordable electric vehicles to market. Elon calls this a secret plan, even if it is well known.

[su_dropcap style=”flat”]T[/su_dropcap]Tesla’s Master Plan was very specific about the ultimate goal but didn’t specify the details of how to reach it. Tesla and Elon Musk once again stole the limelight by introducing its humanoid robot Tesla Bot which is under production.

Tesla Bots Many of us feel bored doing the daily errands like buying essentials, cleaning even in our free time. We would like to have someone do that for us while we are at work or even resting.

Elon Musk certainly understands this as he announced his companies’ latest product, Tesla Bot, on Tesla’s AI day 2021. Tesla Bot is a sleek, humanoid robot that relieves people from tedious day to day activities like grocery shopping and can be used as a substitute for human labour.

[su_dropcap style=”flat”]E[/su_dropcap]Elon described the robot as 125 pounds, 5’8” tall, with a maximum speed of 5 miles per hour made up of lightweight materials. Elon claims his robot can carry a capacity of 45 pounds and a deadlift capacity of 150 pounds.

It will have a screen for helpful information and eight cameras. There will be 12 joints in the arm, two on the neck and chest and 12 more on the legs. Users will be able to speak with the robots. It will be controlled by the self-driving computers inside them.

Tesla Bot will work with automotive artificial intelligence and autopilot technologies to follow routes and avoid any obstacles. Throughout his speech, Elon mentioned the fact that the robot can be outpaced and overpowered in any scenario and jokingly said it will obviously be “friendly”.

[su_dropcap style=”flat” size=”4″]T[/su_dropcap]Tesla Bots are more of a servant than a superhero and will be helpful for families as a housekeeper. From the presentation and specifications, once the Tesla Bots are released, they will have greater after effects, and we will have to keep waiting for it to unravel.

Elon went on to say that the prototype would be released as soon as 2022. What made Musk think about building a robot? Keep watching to find out. Why Human Robots?

[su_dropcap style=”flat” size=”4″]W[/su_dropcap]We know Elon Musk is someone who always thinks bigger than most people. He thinks of technology as the saviour of humankind in the long run. Self-driving cars, space vehicles, and now humanoid robots are all built on this vision.

He ultimately wants to make man an interplanetary species and create an environment where humans and machines merge to live peacefully. He said Tesla is arguably the world’s largest robotics company as their cars are almost robots on wheels, and it makes sense to build robots on a human form.

Tesla Cars make use of autopilot technologies and optical cameras to analyze photos, routes, obstacles in the path and decide what to do. He wants to install this into a humanoid structure and work within the environment built around humans.

He had previously been told that all the technical requirements to create a humanoid robot already existed. Moreover, if they don’t make robots, someone else will, and they have to make them safer.

Humanoid robots replacing actual human labour will have benefits in fields like mining and manufacturing due to the hostile working environment and the threat of losing a life.

[su_dropcap style=”flat” size=”4″]S[/su_dropcap]Secret Plan Tesla Bot seems like a robot working with the same technologies as a fully automated car from the outside. But is this all that Elon Musk is thinking? The goal, according to Tesla, is to create the next generation of automation, which will include a general-purpose, bi-pedal, humanoid robot capable of doing dangerous, monotonous, or boring activities.

Elon even went on to ask mechanical, electrical, and software experts to join their team and make the Tesla Bot a reality. On 19th August 2021, Elon announced the Tesla Bot during the company’s AI day held annually, where a series of tech-related presentations are made to lure expertise into the company.

After explaining the artificial intelligence enhancements like dojo computers, which powers electric vehicles by training them without human assistance, the model of the Tesla Bot was unveiled.

Elon Musk, well within his characteristics, went on to predict the changes Tesla Bot can bring in employment and the economy. He envisions Tesla Bot to replace most of the time-consuming works like labour, buying food, and other dull activities.

According to Elon, the 5′ 8″ tall, 125 pounds, sleek Tesla Bots are not being made to assist Tesla in manufacturing processes but to help the public by running tedious errands.

What will the approximate price range be for Tesla Bots?

[su_dropcap style=”flat” size=”4″]L[/su_dropcap]Launching Of Tesla Bot Even though a robot model was shown at the presentation, Tesla is at the early stages of production with yet to build a fully functional robot. Elon said that the prototype will be produced sometime next year.

Musk didn’t announce a potential release time for the robots; instead said it would become a reality. Like building 1 million fully robotic electric vehicles by the end of 2020, his previous announcement didn’t come into provision.

Given the complexities of launching a robot for the general public, Tesla Bots looks far away for now.

[su_highlight]Elon Musk didn’t mention any price range for the Tesla bots but reiterated that the product will not be very pricey. What about the potential challenges and threats?[/su_highlight]

Challenges As interesting as the idea is, some people say that the Tesla Bot is over ambitious and may change the very basics principles of society.

[su_dropcap style=”flat”]E[/su_dropcap]Elon himself had been told that he is against using robots as weapons in his old interviews and that artificial intelligence, if not properly used, poses an enormous threat to society. So it seems a little hypocritical that the man himself is using the same.

The fact that he specifically stressed points like being friendly, outpaced, overpowered indicates he understands this. Also, the robot is made to function with the technologies being used in the car, which has a dubious track record as there are cases of accidents involving self-driven cars.

Elon indicated that the robot probably did not work at the beginning. Tesla Bots can pose a threat to privacy and autonomy as the robot can acquire, keep, share potentially sensitive information.

Elon went on to say that in the future, physical labour will be a matter of choice. The economic ramifications are another challenge as the robots can take over the physical work in the long term and thereby affect the economy.

Convincing the public about functionality and safety is another challenge the company will be facing. We all have watched and enjoyed robots acting like humans and even doing stuff ordinary people couldn’t with the help of technology.

Ever since then, there has been constant talk of robots in real life and the consequences. But this still remains a mystery to us, like the idea of humans and robots co-existing in real life haven’t come into reality to date.

[su_dropcap style=”flat”]T[/su_dropcap]Tesla is not the first company that is making or building humanoid robots; companies like Honda (whose Asimo robot has been present for a long time is highly advanced), Toyota already have their own robots. Even then, what’s all the hype about Tesla bots? Is it the Tesla factor or the fact that the robot will be powered by a supercomputer?

In the world of technology, Elon Musk never ceases to amaze the world. He never thinks small, and if his success is looked upon, Tesla Bots for sure will be a reality.

We hope you enjoyed our content. What are your opinions about the Tesla Bots, its opportunities and challenges? Leave your suggestions in the comment box.

Thanks for reading till the end. Comment what’s your opinion about this information “Tesla’s Secret Plan Behind Tesla Bot – Elon Musk”.