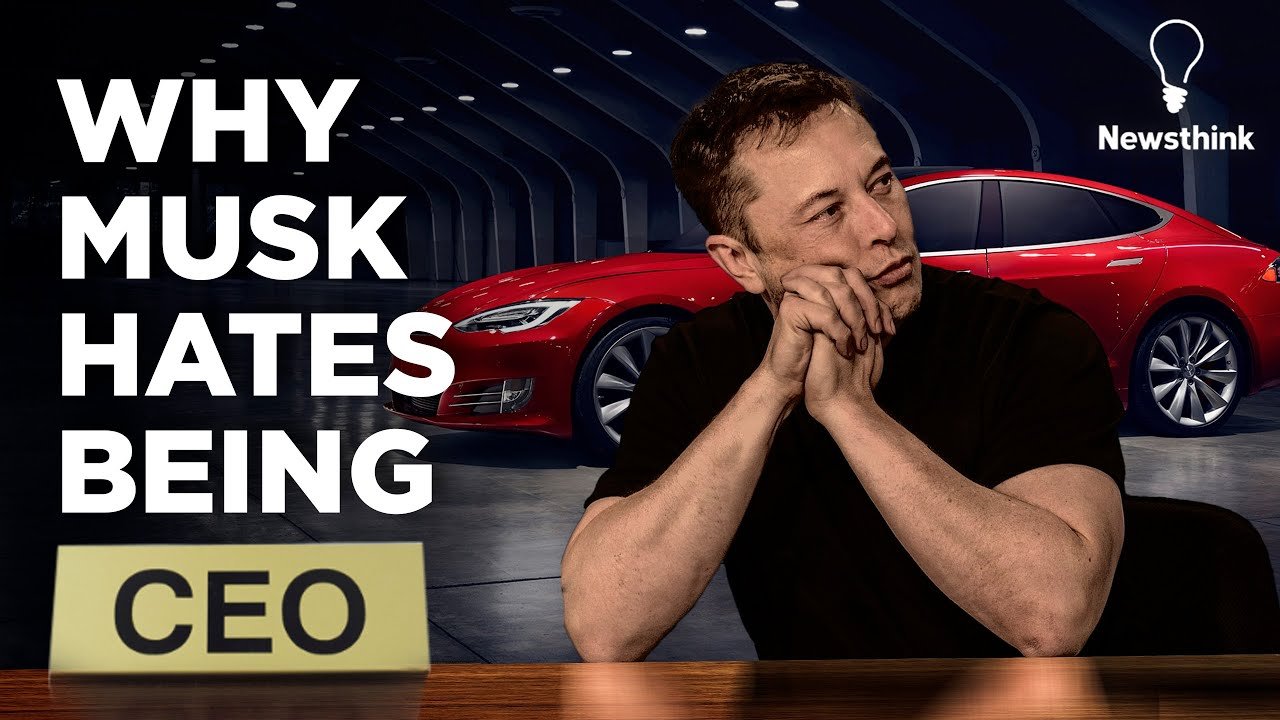 Why Elon Musk Doesn’t Like Being CEO of Tesla: When Elon Musk sat in court and defended Tesla’s purchase of solar panel company SolarCity, he unleashed this bombshell: He hates being CEO of Tesla. He declared:

“I rather hate it and I would much prefer to spend my time on design and engineering which is what intrinsically I like doing.”

The man with the engineering mind has said he only spends 60% of his time at Tesla on engineering. So, why is he still in the driver’s seat? He said during the trial he strongly believes the electric car company cannot survive without him.

Insisting: “…but I have to or frankly Tesla is going to die.” But it’s come at a significant cost to himself. Here’s what he’s said about his experience. I’ve had some pretty tough life experiences and Tesla’s responsible for probably two-thirds of all personal and professional pain combined.”

Musk always knew making Tesla a success would be a battle – giving it a 10% shot at pulling through. But he was inspired to try after test driving a tiny yellow electric prototype called the “tzero”.

He encouraged the company behind the tzero, AC Propulsion, to commercialize it, and when it didn’t, that inspired Tesla to come up with the Tesla Roadster.

The problem with leading an electric car company was that Musk already had a monumental task on his plate. He had only just started his rocket company SpaceX which wanted to do what nobody had done before: build reusable rockets.

That was supposed to be his day job. And on the side, he thought he could dedicate some time to Tesla, maybe 20 to 30 hours a week to work on product engineering. Instead of 20 or 30 hours a week, he sometimes puts in 20 hours a day – even sleeping at Tesla’s factory when it struggled to mass-produce the Model 3 in 2018. But he didn’t start out as CEO.

That job initially fell to engineer Martin Eberhard. He co-founded what was then Tesla Motors, in 2002 alongside Marc Tarpenning. When they went looking for money to fund their venture, Musk came into the picture.

He invested his personal fortune and became Chairman of the Company’s board. When production problems arose with the Roadster and Tesla nearly ran out of money, Eberhard got ousted as CEO. Eventually, Musk took over, in 2008.

He said it was too hard to find a qualified chief executive officer from outside because Tesla wasn’t a traditional automaker but more of a technology start-up. By that point, Tesla was near death. Musk scrambled to save the company by cutting the workforce and relying on friends to cover payroll while negotiating with investors to keep Tesla alive.

As he once told Kara Swisher on the podcast Recode Decode, he still can’t believe Tesla is alive.

He said during that especially hellish period in 2018 – he was open to someone else taking over at Tesla, telling the New York Times: “If you have anyone who can do a better job, please let me know. They can have the job.”

He reportedly did try to offer the top job to Volkswagen CEO Herbert Diess according to a report by Business Insider Germany. This was before Diess left BMW to join Volkswagen in 2015.

There’s no word on why that didn’t work out. Musk has pursued unorthodox strategies for growth as CEO. It’s laid out in Tesla’s “Master Plan”. The strategy involves releasing high-end models before more affordable ones whereas traditional automakers typically do the opposite.

After developing the Roadster, Tesla unveiled the Model S and Model X, which then paved the way for the more affordable Model 3 and Model Y. Fun fact: Musk wanted to name the Model 3 the Model E do that it really spells out SEXY but Ford had a trademark on the Model E and shut that down.

Musk has sometimes taken a cheeky approach to his role. He changed his job title to “Technoking of Tesla” whatever that means. It could be a play on the word technology or techno. And he gave his Chief Financial Officer the title “Master of Coin”.

This is all part of the game plan. He admitted his sense of humor generates free publicity for the company because the media loves this kind of thing. But his antics have also gotten him into trouble. It didn’t go over well with the Securities and Exchange Commission when he tweeted he was thinking about taking Tesla private at $420 a share.

The stock has now soared well past $420 even after splitting. Tesla delivered 241,000 cars in the third quarter of 2021, which means at this rate, it’s on track to hit a million deliveries a year.

But success has come at the expense of a schedule Musk wanted to avoid. And now, he’s hoping to dial back his duties a bit. He says he’ll likely skip Tesla’s quarterly earnings calls from now on. “I will no longer be default doing earnings calls.

I think going forward I will most likely not be on earnings calls unless there’s something really important that I need to say.” It’s in those conference calls that he’s made some epic and controversial comments, like this exchange with a Wall Street analyst in 2018. Sanford C.

Bernstein & Co. analyst Antonio Sacconaghi: And, so, where specifically will you be in terms of… Elon Musk: Excuse me Sacconaghi: …capital requirement? Boring, bonehead questions are not cool. Next. He ended up apologizing to the analyst for his behavior.

Despite taking this step back, we’ll still hear from him publicly. He’s agreed to continuing doing interviews with YouTubers, however, he has pointed out this will be limited as there’s only so much time in his day. And time is precious if you’re trying to electrify the world.

Thanks for reading till the end. Comment what’s your opinion about this information “Why Elon Musk Doesn’t Like Being CEO of Tesla”.