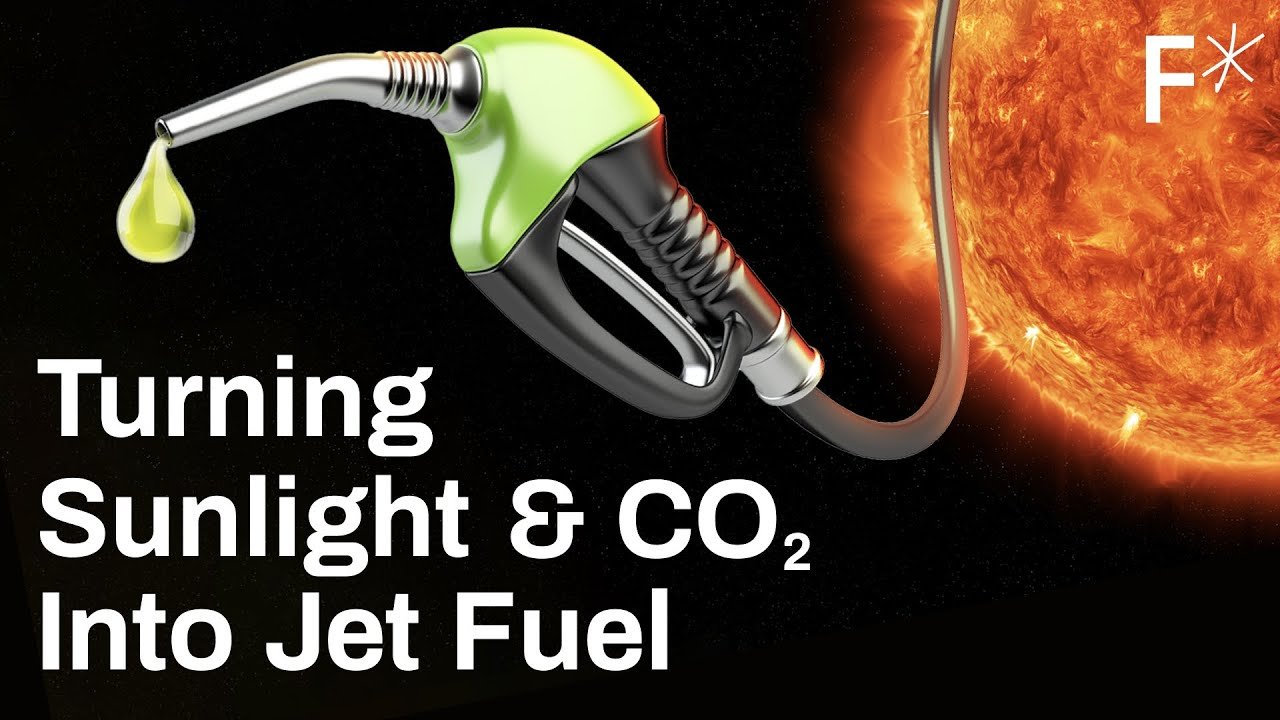 [su_dropcap style=”flat” size=”4″]A[/su_dropcap]Artificial photosynthesis turns CO2 into sustainable fuel: Carbon capture is the idea of taking CO2 from the air and storing it. Carbon conversion is taking that same CO2 and turning it into something useful. CO2 can be used for a number of products, but one of the most exciting is alternatives to fossil fuels.

If we look at what’s possible with batteries today, you can do a lot. [su_highlight]You can electrify certain portions of aviation, but they’re just never gonna touch that jumbo jet full of a couple of hundred passengers going a thousand miles. And that’s where sustainable aviation fuels come in.[/su_highlight]

This is Make It Count, a series on environmental innovations and the math it takes to bring them to the masses. Using CO2 to store energy is not a new idea. It’s literally millions of years old.

[su_dropcap]P[/su_dropcap]Plants have been doing this for a long time, taking CO2 from the atmosphere and converting it into energy through photosynthesis. Dimensional Energy is trying to do the same thing, and they’re using the same energy source, the Sun.

As we contemplate how to make green hydrocarbons possible, we took a look at how to do it with one of the most elemental forms of energy, direct sunlight. We have a great relationship budding with one of the best platforms for concentrated solar collection.

They’ve got what they call a sunlight refinery in the making, and they’re rapidly advancing their technology. And it seems like a perfect partner for us to go within developing our platform.

Low costs and renewable energies are the keys to making this technology competitive with fossil fuels. – With direct sunlight, if we produce electricity on-site with concentrated solar, could take care of all the electricity needs for our process and remove the burden from the grid to make green fuels happen.

[su_dropcap]W[/su_dropcap]With early implementations of this technology, we’re able to produce fuels that cost about $60 a gallon. And before you ask, no, that’s not competitive with fossil fuels.

So you could see that we could quickly decarbonize an entire industry. – Dimensional Energy plans to scale its production up to commercial levels by 2024, aiming to hit a price close to a dollar, which would make it cheaper than traditional jet fuel today.

What you need to do is apply the same logic that brought the scale and velocity to our economy over the last century to a renewable form of energy production, and not just chip away at the niche sides of things and sell renewable fuels at a premium.

If we can create fuels at cost parity, it would be one of the largest industries to ever emerge in such a short period of time.

Technologies are emerging today for the removal of carbon dioxide from say, flue gas, from industrial concrete sites or steel production or power production. Those are highly concentrated sources of carbon dioxide that can be reapplied to making things.

The jet fuel produced by this process will still release CO2 into the air when it’s used. But since it’s equal to the amount taken out of the atmosphere in the first place, it’s carbon-neutral. This means you can make air travel sustainable while using the same planes and infrastructure.

We need to make these hydrocarbons from a circular economy perspective. The circular economy is the idea of producing products that instead of turning into waste at the end of their life cycle, can become a resource for other useful products.

We’ve relied mostly on fossil fuels to power our economy and advance different technologies. So now that industries and the world is waking up to the fact that CO2 is a dangerous greenhouse gas, we have to come up with a way to close the loop on industrial emissions and turn those emissions into something new and have a circular economy approach to carbon management.

And if we can do that, then we can start to see perhaps stemming the worst effects of climate change.

Carbon-neutral jet fuel would be an incremental change with a massive impact. And as the technology improves, it could soon be more affordable than pulling it out of the ground.

[su_dropcap]T[/su_dropcap]There are ways to do transportation without oil. And we’ve been doing them more and more since in the ’90s. Back then battery cars were a blip, if anything, in people’s eyes. And now we’re talking about creating jet fuel from carbon dioxide.

We’ve really developed the technology internally, and we’ll be ready to show that to the world shortly. – When I take a step back and look at the whole project and how far we’ve come, I’m proud of us.

Jason is one of a number of entrepreneurs looking to find technological solutions to climate change, who realize that in order to make lasting change, you have to align economic incentives with what’s good for the environment.

This is an exciting space to invent within. I hope we get a lot more people entering the space of solving big, hairy problems like climate change because it’s a place in which we can see a new economy emerge. And this is what we need to have future generations enjoy the planet just as we have.

Thanks for reading till the end. Comment what’s your opinion about this information “Artificial photosynthesis turns CO2 into sustainable fuel”.