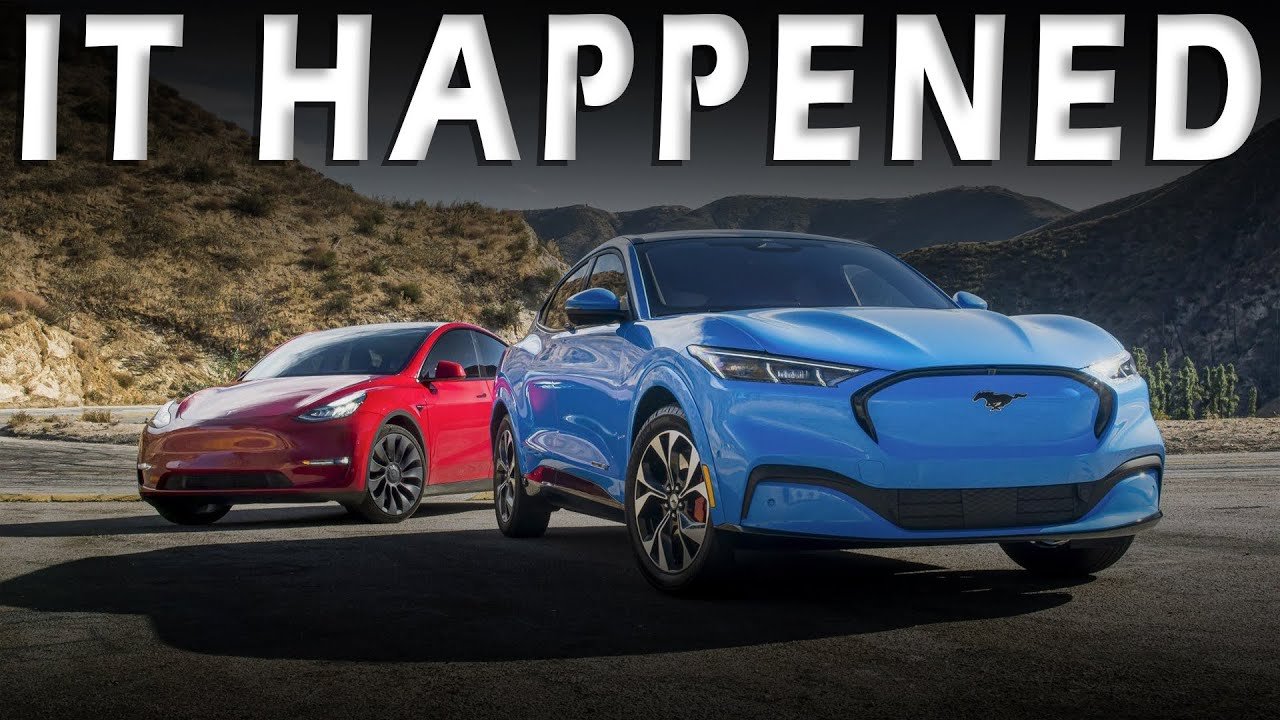 The Ford Mustang Mach E The Great Challenger Of The Tesla Model 3: Today, Tesla is the world’s leading manufacturer of electric vehicles, but we think Tesla needs tough competition, and it looks like for the Tesla Model 3, which happens to be one of the best selling models for Tesla, here comes a serious competition and that too from Ford with their Mustang Mach E.

The trend in the automotive industry is now constantly changing, especially for electric vehicles. Previously the model 3 was the Consumer Report’s favorite electric vehicle thanks to all the features that Tesla provides without the price tag of the Model S. But it looks like the Tesla Model 3 is no longer at the top because we have a compelling product from Ford, which happens to be the Mustang Mach E.

The electric vehicle category was always dominated by Tesla and for good reasons. Tesla is a relatively new company, but the kind of technology that Tesla packs in their vehicles are at least five years ahead of the competition.

Tesla was also successful in getting rid of the range anxiety that people had by setting up superchargers and by providing vehicles with a usable range at the same time giving you some of the fastest production vehicles around.

For the last two years, the Tesla Model 3 was the top pick for the electric vehicle category, but now that title goes to the Ford Mustang Mach E and for the very first time. This score is based on the overall score like ride quality, reliability, satisfaction, and safety.

So what exactly is special about this Ford Electric Mustang? Well, the Ford Mustang Mach E does carry the very famous Mustang badge, because of which this is a very sporty vehicle, and it’s also easier to live with.

The Mustang Mach E is also very practical compared to most Sedans, including the Tesla Model 3. The Ford also gives you better ride quality with great sound insulation inside the cabin, which means you are getting a very quiet cabin.

Combine that with the close to zero noise electric powertrain you have the perfect recipe for a noise-free ride. The Mustang also got the advantage of having a better, more usable large infotainment screen because, with the Tesla Model 3, the only way to interact with the car happens to be with the screen, and you don’t even get a speedometer behind the steering wheel which is difficult for a lot of people to deal with.

The tesla model 3 requires multiple steps to activate, something as simple as a defroster. The Mach E also happens to be a very reliable vehicle which is very good news for those people who want to own an electric vehicle for a long time.

The Model 3, on the other hand, received about an average reliability score from the Consumer Reports with so many problems here and there with the Model 3, which is why for most people, the Mustang Mach E makes a lot of sense.

All thanks to the blue cruise active driving assistance system. This system will give you warnings if your attention goes somewhere else. This way, the Mustang Mach E ensures that you are driving safely, which is a nice thing to have because there are different kinds of people on the road, and everybody drives differently.

So a monitoring system like this will definitely help those people who tend to get distracted while driving. With the Tesla Model 3’s autopilot system, the car will run itself even if you are looking away from the road or even if you’re browsing your Instagram feed. But again, you need to have at least one hand resting on the wheel.

The Mustang Mach E is also more intuitive to use overall, which is why it made it to the top of the list. So which is the best electric vehicle that you can buy today?

Well, as we mentioned earlier, the Consumer Reports ranking system clearly favors the Ford Mustang Mach E to be the best option in the market. But again, keep in mind that the Mustang Mach E is relatively new but is extremely reliable and comes with an excellent infotainment system along with a driver monitoring system.

The competition in the EV space is just getting more aggressive, with so many legacy auto manufacturers working on their own version of a Tesla killer. Most companies forget that it is the charging infrastructure that made people buy Tesla over the competition because, for a gasoline vehicle, fuel stations are almost everywhere.

But for an EV, it still needs to catch up, but Tesla was successful in solving that problem by providing more than 25,000 charging stations worldwide. The problem with the Ford Mach E right now would be the charging stations.

But Elon Musk announced that Tesla’s fast-charging stations would open to other brand electric vehicles, and Tesla might be opening for other brands to use one place at a time.

Tesla also stated that Supercharging stations do not work for other brands because there was no standard back when Tesla started building these supercharger networks for their own vehicles because Tesla was the only company focusing on long-range electric vehicles.

However, if you want to charge your Ford Mach E, every Ford electric vehicle comes with a Ford mobile charger, which is something you can plug into your home wall outlet. According to Ford, there are more than 16,000 charging stations across North America, and that number is constantly growing.

These sessions feature 150 kWh DC fast-charging stations, which will get your Mustang Mach E about 61 miles of range in about 10 minutes, which is huge. If you want to find the ford charging network, you need to install the Ford Pass app, and the app will show owners the best place to stop during a trip with the least amount of downtime.

This makes a lot of sense for people who want to go on a long-range road trip. Ford is also working on making a charging station that is much better than Tesla, and if that happens, Tesla needs to worry because now they have a serious competitor even in terms of charging infrastructure.

Ford is also working on a new charging cable that sends about 4.6 times the current that the Tesla Supercharger cables do today. This might then be the best electric charging station, but the issue with producing that much electricity through a cable will be the size and temperature because cables do get extremely hot, and they need to be really thick.

But then it will create so many other issues, especially when it comes to practicality. Maybe Ford will opt for a liquid-cooled cable that is wrapped with liquid running over the wire so that it gets cooled down immediately.

You see something similar with high-end gaming computers for cooling down the hard-working graphics card.

So right now, it’s clear that Ford is going to challenge Tesla’s dominance with their Mustang Mach E, and let’s hope that Ford releases more electric vehicles because the future is clearly electric, and we want to be a part of that future because electric cars are fun to drive especially with all the research and development that is going into making electric vehicles more usable with better far of charging times and better batteries that give you better range.

We are really, really excited about this and you should be too. And that’s a wrap for today’s post. What do you think about the Ford Mustang Mach E? Will it be able to dethrone the tesla model 3? Do let us know in the comments section below.

Thanks for reading till the end. Comment what’s your opinion about this information “The Ford Mustang Mach E The Great Challenger Of The Tesla Model 3“.

3 thoughts on “Upcoming: The Ford Mustang Mach E The Great Challenger Of The Tesla Model 3”