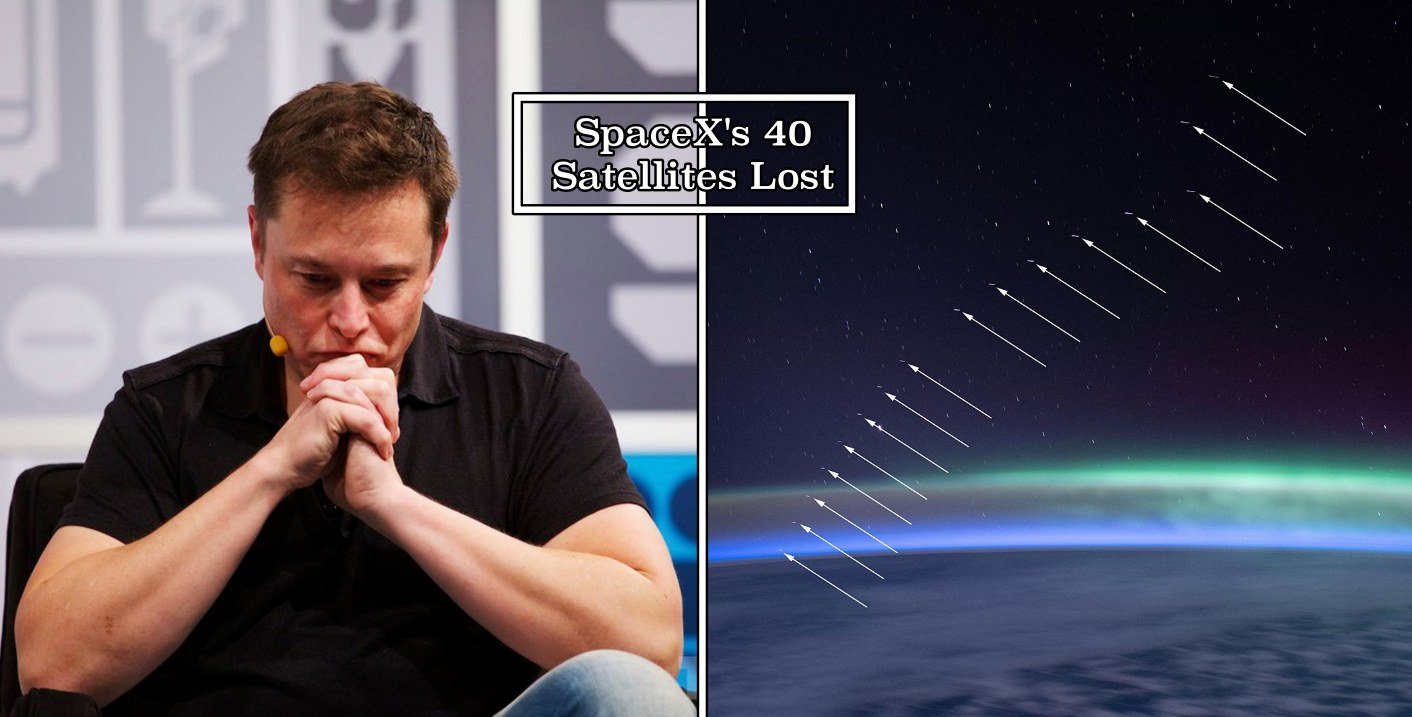 Elon Musk Revealed The Most Terrifying Ticking Bomb That Causes Satellites Loss: Recently, 40 Starlink satellites fell out of their orbits not too long after they were launched. These 40 satellites fell through the atmosphere and burned up before impacting the ground. This has never happened before.

And according to Elon Musk, what caused the loss of those satellites is a ticking time bomb that may affect all of us. Now, the question is “what exactly is going on?”. We’re about to find out.

SpaceX’s newest fleet of satellites slid out of orbit. According to the company’s online update. Up to 40 of the 49 tiny satellites launched have either re-entered the atmosphere or burned up.

A geomagnetic storm, they said, made the atmosphere denser, increasing the drag on the Starlink satellites and thus dooming them. Ground controllers attempted to salvage the small, flat-panel satellites by putting them into a state of hibernation and flying them in such a way that they would generate the least amount of drag.

According to the business, the satellites were unable to awaken and climb to a higher, more stable orbit due to the strong air drag. The satellites that were impacted by the solar storm were only in orbit for a short time.

SpaceX places them in this unusually low orbit to ensure that any failures reenter the atmosphere swiftly and pose no threat to other missions. According to the company, these recently launched satellites pose no threat in space or on the ground.

The missing satellites were described by SpaceX as a “one-of-a-kind scenario.” Intense solar activity, such as flares, can send streamers of plasma from the sun’s corona hurtling out into space and toward Earth, causing geomagnetic storms.

OneWeb, a British-Indian enterprise that emerged from bankruptcy in 2020 and is set to launch another 34 satellites this week, isn’t SpaceX’s lone competitor in the satellite communication industry. This year, it intends to expand commercial service.

Meanwhile, in Redmond, not far from SpaceX’s satellite production facility, Amazon is laying the groundwork for its Project Kuiper satellite network. Amazon noted satellite failures and the possibility of orbital collisions in comments filed with the FCC as concerns to consider when assessing SpaceX’s Gen2 proposal.

Approximately 200 Starlink satellites have been decommissioned after launch, either due to on-orbit failure or deliberate or unintentional deorbiting. However, let’s take a look at the specifics of the cause behind the loss of these recent satellites.

What are geomagnetic storms? Geomagnetic storms are short disruptions of the Earth’s magnetic field and atmosphere (also known as the magnetosphere) caused by bursts of radiation and charged particles generated by the Sun.

The surrounding magnetic field deflects this solar stuff towards the poles as it collides with our planet at high speeds. It reacts with substances deeper in the atmosphere, causing auroras to appear as ‘curtains’ of light.

These currents can be powerful enough to overrun entire electrical systems and destroy sensitive equipment during periods of high solar activity.

According to recently revealed naval data, geomagnetic storms triggered the detonation of scores of sea mines off the coast of Vietnam in 1972. In 1859, one of the most devastating storms dubbed the Carrington Event, struck, and it was not quickly forgotten.

There were reports of telegraph equipment malfunctioning and electrocuting operators, as well as an extreme brightening of auroras. Today, there are fears that a similar occurrence may have considerably more disastrous consequences for technology and the society that relies on it.

A geomagnetic storm the size of the solar storm of 1859 today may cost billions, if not trillions, of dollars in damage to satellites, power grids, and radio communications, as well as widespread electrical blackouts that could take weeks, months, or even years to recover.

Electrical blackouts of this magnitude could jeopardize food production. For SpaceX and even Tesla specifically, the implications of a major geomagnetic storm are enormous.

The areas of weakness for SpaceX are communications, navigation systems, satellite hardware, and radiation hazards. Solar activity has an impact on military detection or early warning systems that operate in the high-frequency range.

Over-the-horizon radar monitors the launch of airplanes and missiles from great distances by bouncing signals off the ionosphere. This method can be significantly affected by radio congestion during geomagnetic storms.

Submarine magnetic signatures are also used as one input to various submarine detecting systems’ locating algorithms. These signals can be masked and distorted by geomagnetic storms.

Non-terrestrial telephone, television, radio, and Internet links can be disrupted if communications satellites are damaged. In 2008, the National Academy of Sciences published a paper on hypothetical scenarios of widespread disruption at the solar peak in 2012–2013.

A solar superstorm could create global Internet outages that last months. A study examined the robustness of the current Internet infrastructure and discusses various mitigation strategies and exceptions, such as user-powered mesh networks, associated peer-to-peer applications, and new protocols.

They found that the current Internet infrastructure was very vulnerable to a solar storm. Increased solar UV output and geomagnetic storms heat Earth’s upper atmosphere, causing it to expand. The heated air rises, resulting in a large increase in density at satellite orbits up to 1,000 km (621 mi).

As a result of the increased drag, satellites slow down and shift orbits somewhat until they fall. This also explains why 40 Starlink satellites lost contact with Earth. Low-Earth-Orbit satellites that are not boosted to higher orbits on a regular basis gradually plummet and finally burn up.

The loss of Skylab in 1979 was an example of a spacecraft entering Earth’s atmosphere prematurely due to higher-than-expected solar activity. Starlink will most likely also be used for navigation. The upper atmosphere is heated by increased solar UV radiation and geomagnetic storms, forcing it to expand.

At satellite orbits of up to 1,000 km, the heated air rises, resulting in a significant increase in density (621 mi). Satellites slow down and shift orbits as a result of the increased drag, eventually falling. This also explains why 40 Starlink satellites were unable to communicate with the Earth.

Low-Earth-Orbit satellites that are not regularly boosted to higher orbits progressively decay and eventually burn up. Skylab, which was lost in 1979 owing to higher-than-expected solar activity, was an example of a spacecraft entering Earth’s atmosphere prematurely.

The Jicamarca Radio Observatory has also looked into it. Receiver Autonomous Integrity Monitoring is a system that allows GPS receivers to continue to work in the presence of some misleading signals (RAIM).

However, because RAIM is based on the premise that the bulk of the GPS constellation is functioning normally, it is far less useful when the entire constellation is disrupted by global factors like geomagnetic storms.

Chromosome damage, cancer, and other health issues can be caused by high-energy particles penetrating live cells. Large amounts can be lethal right away. Solar protons with energy above 30 MeV are especially dangerous.

A distinct but related type of event, solar proton events, can also cause increased radiation aboard airplanes flying at high altitudes. Although the dangers are minor, flight crews may be exposed multiple times.

Satellite instrumentation that monitors solar proton occurrences allows exposure to be monitored and evaluated, enabling flight courses and altitudes to be altered to reduce the absorbed dose.

Ground-level enhancements, also known as ground-level events or GLEs, occur when a solar particle event contains particles with enough energy to have effects at ground level, which are typically identified as a rise in the number of neutrons observed at ground level.

These occurrences have been found to have an effect on radiation dosage, although they do not increase the risk of cancer appreciably. Even yet, there is a significant risk of damage to SpaceX’s ground communication and monitoring systems.

For astronauts, this critical loss of communication can be highly deadly. It would still be a tense occasion even if it wasn’t deadly. Elon Musk’s ambitions are indeed often at the mercy of celestial events.

Thanks for reading till the end. Comment what’s your opinion about this information “Elon Musk Revealed The Most Terrifying Ticking Bomb That Causes Satellites Loss“.