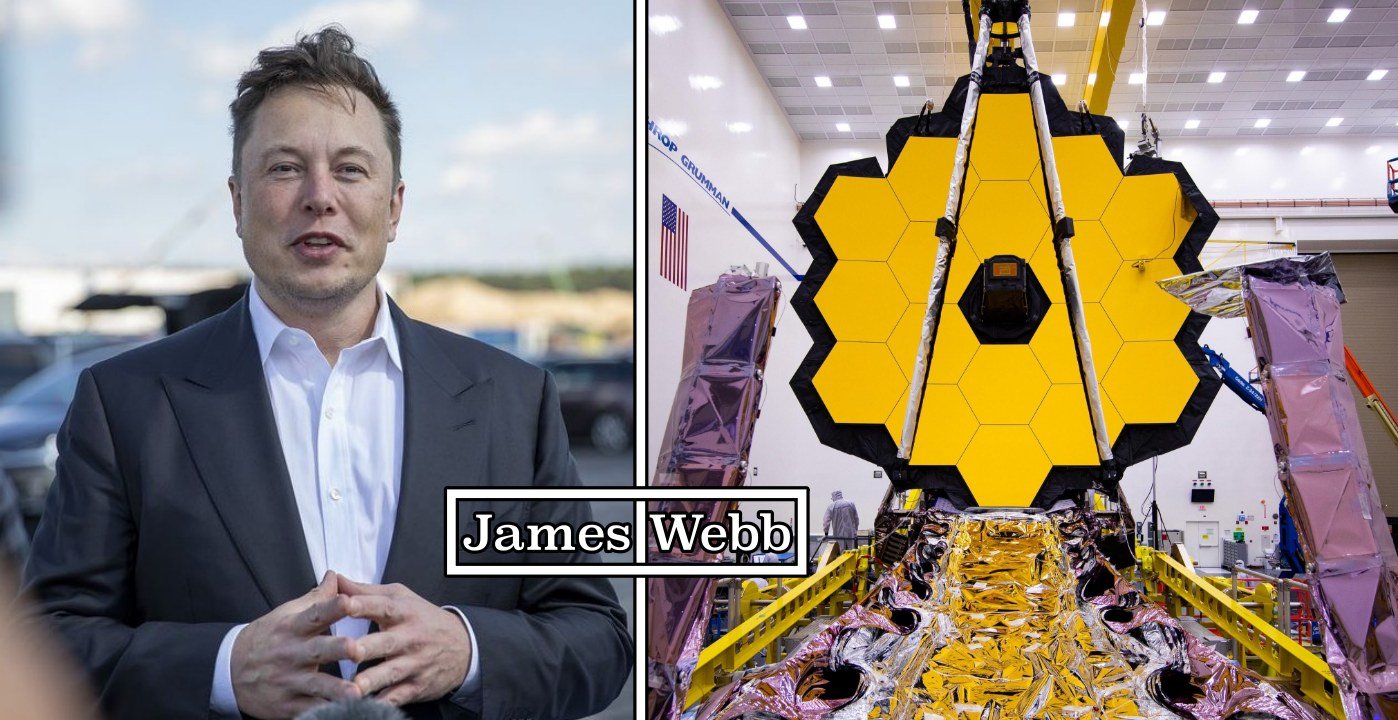 Elon Musk’s thoughts on “James Webb Space Telescope”: As humans, we have always been curious about our origins. The curiosity in our nature has always pushed us to explore beyond the confines of our planet, seeking to discover new life in the galaxy. We all want to know how we came to be and find answers to questions about our universe and its existence.

Our quest for information has opened up space travel. Man has explored the moon and hopes to colonize other planets. Another era of space exploration is on its way. With the James Webb Space Telescope launch, the answers we seek might just be at our fingertips. Join us today as we look at what Elon Musk has revealed to us about the James Webb Telescope.

Elon Musk has always been interested in space exploration. His company SpaceX pioneered the technology for reusable rockets and has reduced the cost of space travel by a wide margin. He is also developing a vehicle that will be a game-changer for space travel.

This space telescope was built with the combined efforts of three space agencies: NASA (National Aeronautics and Space Administration), ESA (European Space Agency), and CSA (Canadian Space Agency). It was named after James E. Webb, NASA’s administrator, from 1961 to 1968.

It operates in low-earth orbit, making it easily accessible to astronauts to carry out repairs and upgrades. As soon as Hubble’s telescope launched in 1990, NASA was already thinking of a replacement. The development of the James Webb Space Telescope began in 1996, with a budget of $500 million.

The telescope was supposed to be ready for launch in 2007, but many delays and cost overruns plagued it. It had to undergo a significant redesign in 2005. The telescope’s construction was not completed until 2016; it was launched into space on December 25, 2021, on the Ariane 5 rocket after undergoing an extensive testing phase.

The cost of the entire project was $10 billion. The construction of this telescope took almost 30 years to be completed. NASA involved over 300 universities, companies, organizations in the United States and 14 other countries. The main contractor for the project was Northrop Grumman.

The launch of the telescope has caught the attention of many people, and Elon Musk voiced his opinion about the project. The space telescope puts humankind just steps away from unraveling cosmic secrets.

Elon Musk replied to a BBC article on Twitter about the Telescope, and his words were, “This is a big deal.”

The James Webb Space Telescope is no small project; it is a considerable achievement for NASA and other agencies involved in its creation. Elon Musk knows this, so he has revealed why this space telescope is such a big deal for humanity.

Brace yourself, and get ready to be amazed. What makes the James Webb Space Telescope a big deal is its ability. The telescope was built to detect the faintest of information-carrying light. It should be able to view images 100 times fainter than its predecessor, the Hubble Space Telescope, could view.

The stars we see now are so far away from us; many of them are millions and billions of light-years away. The telescope will retrace these light sources, peering back in time to about 13 billion years ago. The telescope is built to look back to the very beginning when stars emerged. It is like a time machine that lets you peer back into time.

With the James Webb Telescope, scientists will be able to revisit the early days when the universe was still very young. They would be able to learn how our universe got filled with light. Who knows, maybe we’ll watch the big bang as it happened on YouTube.

It is a known fact that before the big bang, darkness was what existed. This cosmic darkness was eliminated when the first stars ignited, and the creation and evolution of the world began. The Senior Project Scientist and Nobel Prize-Winner John Mather told the BBC that the James Webb Space Telescope would hunt for the lights that emerged from the first stars billions of years ago after it points its

21-foot gold-plated mirrors towards a tiny space in the sky. The ability of this telescope seems too good to be true. For the doubting Thomases and skeptics, let’s get into the science of how the telescope will carry out its purpose.

The telescope has a primary mirror called the Optical Telescope Element. This mirror is what it uses to gather light. This primary mirror is made up of 18 hexagonal segments made with gold-beryllium. The gold coating on these segments is so thin that a human hair is 1000 times thicker.

The primary mirror has a diameter of 21 feet and gives the James Webb Telescope a light-collecting area that is almost six times as large as that of the Hubble telescope. Webb’s telescope is designed to detect low-frequency range, long-wavelength visible red light.

It could observe objects that are too distant to be captured by the older Hubble Telescope. It can see right through a massive cloud of dust, where planetary systems and stars are born. It is designed to look at places where the Hubble telescope can only peak at.

The Webb’s telescope is so sensitive that it can detect the heat signature of a bumblebee at the distance of the Moon from Earth. If you lost your penny, this telescope could pick out details on the penny from over 25 miles away. The James Webb Space Telescope needs to be kept at temperatures lower than 50 Kelvin.

So that it can observe faint signals from infrared sources without any inference, to achieve this, the telescope will deploy to a strategic point known as the Lagrange point. This is a neutral point in space about 1.5 million kilometers from the Earth’s surface.

In this spot, Webb’s telescope will use its five-layered kite-shaped shield to protect itself from getting warmed by the Sun, Moon, and Earth. Webb’s telescope launched into space on December 25, 2021. It is already on its way to the designated Lagrange point.

The telescope is so large that it had to be folded up into a rocket. It is more than three stories tall, it is as wide as a tennis court, and it remains one of the most complex space science projects ever worked on. As the telescope journeys in space, it must complete the difficult mechanical maneuver of assembling itself.

NASA has revealed that this maneuver is very delicate, and there are more than 300 technical problems that can potentially doom the mission. Scientists estimate that it would take six months before we get the best images it has to offer.

The telescope has to undergo a series of tests, sun shield deployment, alignment, instrument turn on, and calibration. Since Webb’s telescope is far beyond reach, the calibrations and adjustments will have to be done remotely.

The James Webb Space Telescope will take new images of celestial objects that the Hubble Space Telescope has formerly captured to understand them better. Hubble’s telescope is fully functional and operational, and both telescopes would work together for a while.

The telescope will also be focusing on galaxies. Looking at galaxies gives us hints to how the universe evolved. It will look back at one of the earliest galaxies to better understand evolution. The Pillars of Creation are famous birthplaces for stars.

The Hubble telescope has given us a glimpse at them, but it is impossible to see much through the dust and gas clouds that create the stars. Webb’s telescope will look at these heat sources and observe as stars are made.

With Webb’s telescope, we will be able to look at several exoplanets that have been found by NASA’s planet-seeking Kepler Space Telescope. In some cases, Webb’s telescope might be able to capture images of the planet’s atmosphere, to help scientists predict if the planets are habitable or not.

All these sound like things that are supposed to be in a science fiction movie. We agree with you; that’s why we think the James Webb Space Telescope is an outstanding achievement for us as humans.