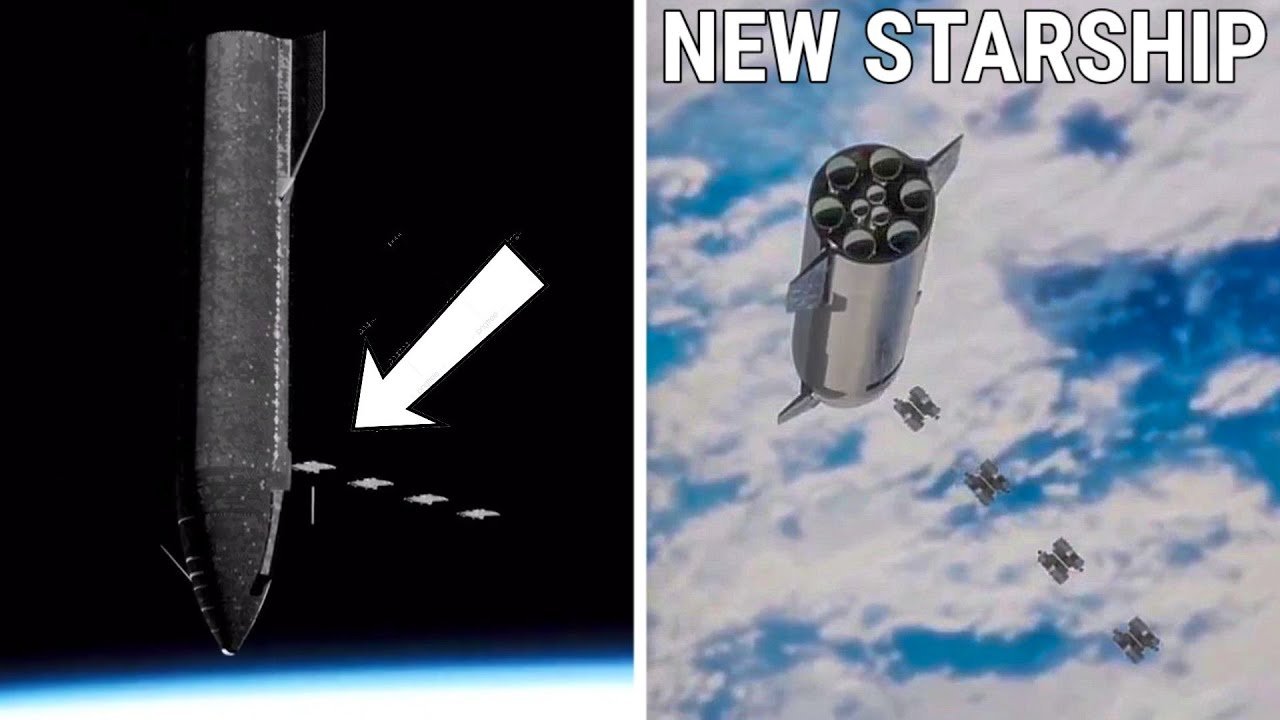 SpaceX New Starship Design For Starlink Satellites Launches: After several weeks of work and occasional glimpses of the hardware and installation process, it’s now clear that SpaceX has outfitted part of its next Starship prototype with a truly unique Starlink satellite dispenser.

It remains to be seen if this particular assembly is simply a pathfinder – an experiment never meant for flight – or an integral part of a prototype that could become the first Starship to reach space or even orbit.

In the first few months of 2022 a slightly different pathfinder was also quickly assembled but was ultimately moved to the scrapyard. The latest prototype is quite different.

First, the device installed inside what appears to be the steel rings Starship S24’s nosecone will eventually be stacked on top of is almost nothing like any satellite deployment adapter observed in the past or present.

The rectangular framework SpaceX craned inside of the barrel-like section of five steel rings – a cylinder measuring around 9m x 9m (30 ft x 30 ft) – about two weeks ago looked rudimentary and lacked any obvious moving parts, generating some ambiguity.

Based on its apparent dimensions, the frame could likely extend anywhere from 10-15m (30-50 feet) up into Ship 24’s nosecone before the diameter would get too narrow for it to continue.

If it was a satellite deployment adapter, which most expected it to be, it was nothing like any other common adapter – including SpaceX’s own unusual present-day Starlink deployment method. It wasn’t until March 24th that SpaceX spun the nose barrel around, revealing an unusual cutout akin to a giant mail slot.

At that point, it became clear that Ship 24’s nose had been fitted with a Starlink satellite deployment mechanism akin to a giant PEZ dispenser. Instead of a large, alligator-like payload bay, all Starship would need is a comparatively tiny slot and either an active or passive mechanical deployment mechanism.

Starlink satellites would first be loaded one by one into the slot and somehow lifted inside the bay on the rail-like frame SpaceX recently installed. Eventually, that dispenser would be filled with a stack of an unknown number of Starlink satellites – likely larger Starlink V2 prototypes but possibly today’s smaller V1.5 satellite variant.

Once in orbit, the stack of satellites would be ejected one by one through Starship’s payload slot. The satellites could potentially be passively fed down to the slot with a tension mechanism or Starship’s maneuvering thrusters, reducing the dispenser’s complexity.

Crucially, alongside the first fully outfitted prototype with an upgraded Starship nosecone design, the ‘nose barrel’ the apparent Starlink dispenser is part of has also been fitted with heat shield stand-offs, ceramic wool insulation, and netting.

Most importantly, technicians began installing dinner plate-sized heat shield tiles on the barrel section’s exterior within the last few days. The logic behind SpaceX’s Starbase decision-making has been increasingly indecipherable in recent months but, in theory, it would make little logical sense to waste time, effort, and money installing a thermal protection system (TPS) on a Starlink dispenser.

In other words, it’s quite likely that this Starlink dispenser is actually a part of Ship 24 flight hardware. Alongside Booster 7, Ship 24 is widely believed to be the first Starship scheduled to attempt an orbital launch after the recent demotion of Ship 20 and Booster 4.

That means that it’s quite possible that this dispenser is actually meant to deploy Starlink satellites from Starship. According to Elon Musk, Ship 24 and Booster 7’s orbital test flight could occur as early as May 2022.

The Commission filed a series of questions to SpaceX last month, which the company has now addressed. In May 2020, SpaceX requested a permit from the FCC to operate nearly 30,000 satellites in a new generation Starlink constellation they called “Gen2.”

This new constellation, as SpaceX explained, would be used to augment the capabilities of the first one and be able to serve more people at higher bandwidth and lower latency than the first generation constellation.

In August 2021, SpaceX requested an amendment to the FCC to include two possible scenarios for this constellation: Configuration 1 and Configuration 2. Configuration 1 would make use of Starship for the launch and deployment of all the satellites of this new constellation, as well as have a modified number of shells and orbital planes than the original.

Configuration 2 would make use of Falcon 9 for launching and deploying all satellites – with its corresponding arrangement of orbital shells, planes, and satellites per plane. Last month, the FCC sent a letter to SpaceX asking for more details about this amendment.

As expected, SpaceX replied this week, responding to each of the questions and providing some interesting information. The letter’s introduction opens with SpaceX complaining to the FCC, both about the lateness of the approval for filling and the lack of similar questions asked to other would-be competitors of Starlink.

SpaceX then noted that it has opted to go with “Configuration 1” instead of “Configuration 2” as an update to their plan, which translates to launching this second generation of Starlink satellites into orbit using Starship instead of Falcon 9.

After the FCC asked about how SpaceX would operate this new constellation alongside its current generation of Starlinks, and if the terminals were capable of working with both Gen1 and Gen2 satellites.

SpaceX noted its commitment to continue launching the 4,408 satellites of their first-generation constellation – having launched about 1,900 of them already – as well as deploying the next generation of satellites.

SpaceX expanded by adding that it wants to operate both constellations simultaneously, noting “just as terrestrial wireless networks meet customer demands by operating more than one generation of technology simultaneously, SpaceX plans to use both of its networks to provide superior service.”

This includes launching replacement satellites later down the line to keep the first-generation constellation serviced while deploying Gen2 satellites. SpaceX also said that customer user terminals would be able to communicate through both constellations.

The FCC also asked SpaceX about the launch plans for Gen2, given that the company had said in the August 2021 amendment that they were considering two different configurations. As they did in the introduction, SpaceX noted that they intend to go ahead and launch these satellites using Starship alone.

“SpaceX has now reached a point in the development of its Starship launch vehicle and Gen2 satellites that it can concentrate solely on Configuration 1 and no longer pursue Configuration 2.

SpaceX confirms here that it still intends to begin launching the Gen2 system as early as March 2022, likely beginning with the 43 degree or 53 degree inclined planes.” That target date will almost certainly slip, given SpaceX is yet to launch the demonstration flight to orbital velocity.

As such, the readiness of Starship launching Gen2 satellites will be constrained by the readiness of several factors, including launch site readiness, the FAA approval of the Boca Chica Programmatic Environmental Assessment (PEA) and subsequent grant of the launch license, as well as the orbital test flights that might precede the first Starlink Gen2 launches.

When Starship enters the early operational phase, Starship launches from Boca Chica to the 43º and 53º orbital planes will also likely involve a substantial dogleg maneuver to avoid overflying parts of Mexico in the Yucatan peninsula.

Thanks for reading till the end. Comment what’s your opinion about this information “SpaceX New Starship Design For Starlink Satellites Launches“.