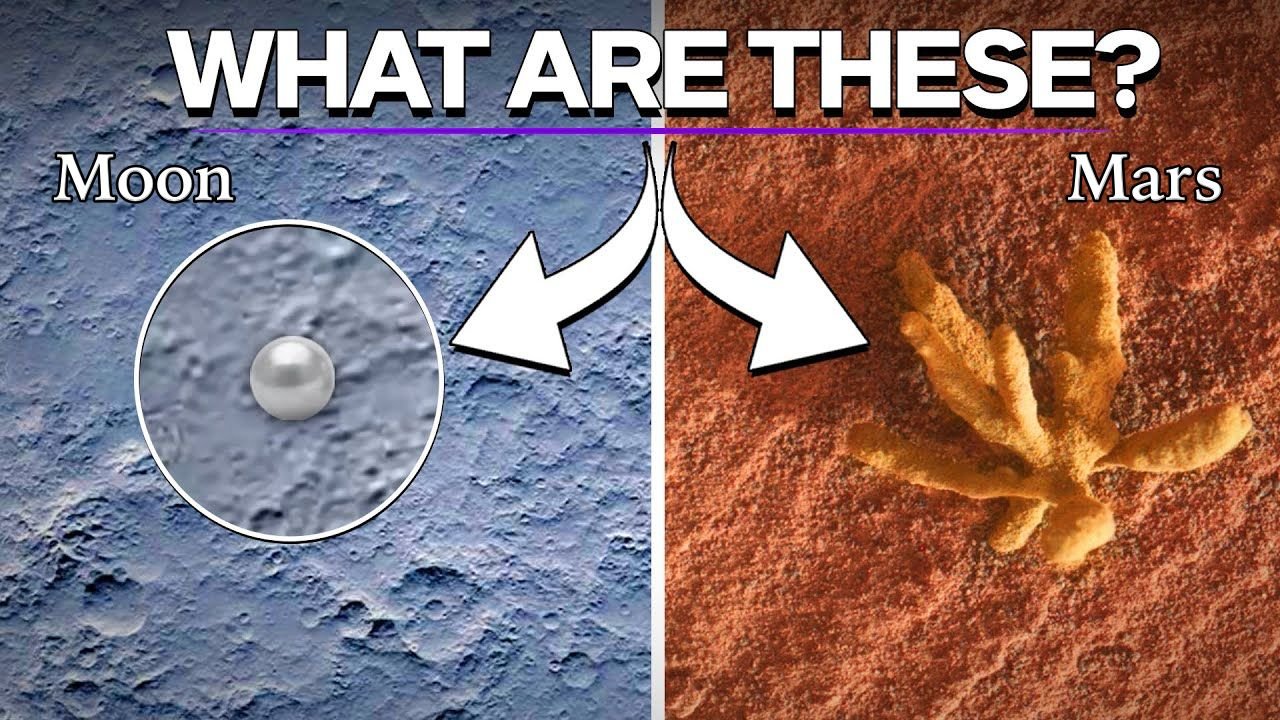 Something Strange Found On Mars And Moon: One of the major revolutions we had in the last decades was humans being able to send probes on other planets and the moon, as well as rovers. Huge steps have been made in this direction, and some months ago we even sent a small helicopter on Mars!

Its name is Ingenuity! Such technologies are developed in order to take us on a higher understanding level of our universe.

Nowadays, big discoveries are often coming from them. They are as useful as telescopes and let us observe and study our solar system with an amazing grade of precision. The thing is, we often find something completely new and…unexpected!

This was taken by the Curiosity rover directly from the surface of the red planet.

Doesn’t it seem like a coral? What is going on here? Follow me in this video to get to know more about these strange objects and what they really are.

Let’s start with the first image. If you look carefully, you can spot what seems to be a sphere on the moon’s surface. This picture was taken by China’s Yutu-2 mission. Yutu-2 is the robotic lunar rover component of the Chinese space agency’sChang’e 4 mission to the Moon.

Among other things, in the first 25 lunar days (around 738 Earth days) of Yutu-2’s mission, the rover crawled over more than 2,700 feet across the 110-mile diameter Von Kármán impact crater within the Aitken Basin at the Moon’s southern polar region.

It found the terrain to be relatively flat and free of rocks compared with areas on the side of the Moon facing Earth, such as the Mare Imbrium explored by the first Yutu rover from 2013 to 2015, and by Luna 17 and Apollo 15 in the early 1970s.

Change 4 was launched in December 2018 and it soft-landed on the Far Side of the moon in January 2019. It holds the records of being the most long-lived lunar rover and the first one traversing the far side of the moon. The rover’s panoramic camera picked out these two small intact spheres of translucent glass.

This is an amazing discovery. Of course, as one can imagine, they are not human-made spheres and they are not some extraterrestrial product, yet they are more interesting than you think! This is because such spherules can tell us something about Moon’s history.

For example, we can retrieve some information about the composition of its mantle and past impact events. But how did glasses arrive on the Moon? Scientists think that the material formed when silicate is subjected to high temperature. And the moon, in the past, had both high temperatures and silicates.

In fact, our romantic satellite was volcanically active, and this activity led to the formation of volcanic glass. But there is also another way to form glass: impacts from smaller objects such as meteorites can generate intense heat, resulting in glass formation.

All of this is to say that glass is pretty common on the Moon. According to planetary geologist Zhiyong Xiao of the Chinese Academy of Sciences, the latter could be behind the spherules observed by Yutu-2.

Anyway, it’s really hard to say, we can never be sure, and this is also because let’s face it: most of the glass found on the moon to date looks really different and it has not had the shape of a sphere. Better saying, we already knew there are spherules up there, but they tend to be less than a millimetre in size.

Instead, Yutu-2’s spherules are larger than that, something like 15 to 25 millimetres across. And this is not even the greatness of this discovery, because similar glass balls were already recovered from the Moon’s near side during Apollo missions.

The main difference, as Xiao and colleagues explain, is that the far side spherules are translucent or semi-transparent. While the ones on the near side were bigger, up to 40 millimetres across, and quite opaque.

In addition to the two that seem to be translucent, they found four more spherules that have a similar luster, but their translucency could not be confirmed. Such spherules were found close to a crater, therefore they are thought to be impact spherules.

We are really confident they are glass spheres because we have them here on Earth! Such tiny glasses spherules are created during an impact, generating intense heat that the crust melts and sprays into the air. Then, the molten material falls back down as tiny glass beads.

The team says the peculiar morphology, geometry, and local context of the glass globules are consistent with being anorthositic impact glasses. In short terms, they would be the equivalent of terrestrial tektites. Tektites come from the Greek tektos , fused.

They are natural glassy objects, consisting mainly of silicates larger than a few centimetres. According to most scientists, they were formed as a result of the impact of large meteorites on the earth’s surface, when at the exact moment of impact, the shock waves produced fractured and partially melted the encasing rocks of the earth’s surface.

We can’t know for sure without studying their composition, but if they are lunar tektites, they might be quite common on the lunar surface. This offers some tantalizing possibilities for future research, the team says.

The study carried out by the team predicts that such spheres should be really abundant across the lunar highland. This is something really interesting that could turn out to be the starting point of a new understanding of t our satellite’s nature. Well, we solved this mystery of the moon.

Now we are left with the second picture, coming directly from Mars’ surface. What is this? It kinda looks like a flower or a coral. If it was so, this could finally be the proof of life on another planet.

This could be revolutionizing our world, and we could probably die happy…but scientists assert it is not, nor has ever been, alive. This image was taken by NASA’s curiosity some days ago, on Feb. 22 2022. It seems to show a tiny red “crystal” mineral deposit, which is just two-fifths of an inch wide. It looks really good, doesn’t it? But what is this?

Scientists say it is the product of interaction between martian rocks and water. Yes, because we know for sure Mars had water in the past. By definition, this makes it a diagenetic feature, or one that occurs after the sediment is turned sedimentary rock.

Diagenesis is the process that describes physical and chemical changes in sediments first caused by water-rock interactions, microbial activity, and compaction after their deposition.

Dr Abigail Fraeman, a planetary scientist and deputy project scientist for the Curiosity rover said “We’ve seen diagenetic features with similar shapes before, but this dendritic shape is particularly beautiful.”

We know the chemical composition of this crystal because luckily our Curiosity rover has a foot arm that stretches towards the rocks and can analyze them. The rover is car-sized and it can also bring rocks, soil and air onboard, and study them directly on the rover itself.

One of the most important things we can learn from this discovery is that morphology is not the same as life. Just because something resembles some existing organisms, this doesn’t mean what we found is a living organism.

Moreover, scientists now believe that if life ever existed on Mars, it would almost certainly be microscopic. This was definitely not the case. If we take a look at other papers, we can see that such crystals exist in various 3d formations, and they form as the crystals solidify from the liquid water.

Also, these crystals seem to be very resistant to erosion. One of the well-known examples of this process or this type of crystal is the tiny, iron-rich spheres scattered across the rock surface near the robot’s landing site that snack-loving scientists working with the mission dubbed these objects “blueberries.”

Basically, this new crystal is very unusual in shape, but it is quite common to find in different forms on the martian surface. It was dubbed Blackthorne Salt, and we can’t find something like this on our planet Earth, because we have very different chemical reactions and a lot more erosion and sedimentation.

The analysis of these kinds of crystals and glass spheres on the surface of another planet and on the moon can only be conducted by rovers, and that’s why they are so important to us. Curiosity, for example, is currently doing great.

Something major could happen that shortens the life of the mission at any time, but barring that, the mission’s life is limited by its plutonium power source, he says.

Over the next years, NASA will need to cut back on the rover’s activities gradually, because at some point there won’t be enough energy to keep the rover going. But until now, it keeps amazing us with brand new discoveries and awesome pictures from the Red Planet.

Thanks for reading till the end. Comment what’s your opinion about this information “Something Strange Found On Mars And Moon“.

3 thoughts on “Something Strange Found On Mars And Moon”