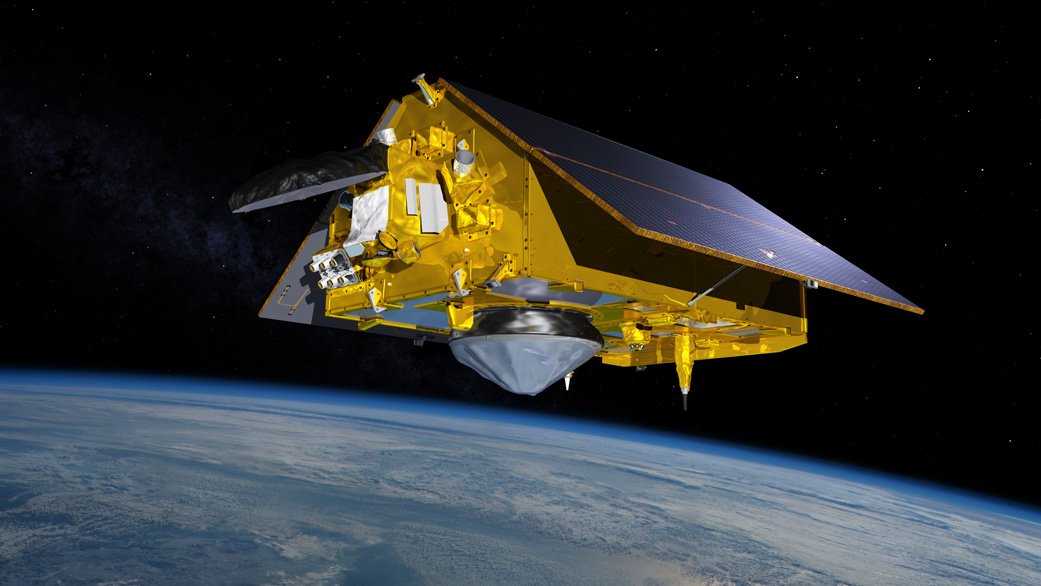 Why NASA Launched a House into Space: Out of the 10,000 objects that have been launched into space and all of human history a few look quite peculiar. A satellite is shaped like a tiny house. There’s a reason it looks the way it does and it has to do with its purpose.

In November, the Sentinel-6 Michael Freilich satellite arrived at Vandenberg Air Force Base in California to hitch a ride aboard SpaceX’s Falcon 9. This satellite is designed to measure the height of the ocean in order to better understand how Earth’s climate is changing.

Although NASA uses different tools to study the ocean: planes, ships, vessels, robots, and people – a satellite gives a comprehensive view of the bigger picture.

This one is highly sophisticated. It can map up to 95% of the world’s oceans every 10 days at an altitude of 1,300 kilometers with a precision down to a few centimeters. That’s more accurate than the long line of instruments that came before it.

Beginning in 1992, NASA and the French space agency CNES launched Topex/Poseidon followed by a series of missions that includes the Jason satellites. Meanwhile, the European Space Agency started their own program called Copernicus which includes the Sentinel series.

Europe and the US decided to join forces to create the Sentinel-6 Michael Freilich in honor of the American oceanographer who headed NASA’s Earth Science division. It’s inspired by the similarly house-shaped CryoSat from the European Space Agency which measures the thickness of polar sea ice.

Such a design offers a distinct advantage. It allows the solar panels to be placed directly onto the satellite. Solar panels convert the sun’s energy into electricity in order to power the spacecraft. It’s a far more stable solution than this alternative which involves adding big solar wings that have to move.

The Sentinel-6 is equipped with an altimeter or an altitude meter – an instrument that measures sea levels. Here’s how it works.

Sea level satellites emit a pulse of radar waves that bounce off the surface of the water and return to space. Once it detects the return signal, the altimeter calculates the round-trip travel time. The shorter the trip, the higher the water is below.

Previous satellites have already shown that sea levels have risen steadily at a rate in excess of 3 mm a year due to the earth warming primarily because greenhouse gases trap the heat – most of which is absorbed by oceans.

As the water warms, it expands and then rises. Another reason for the increase is melting ice from land-based glaciers and ice sheets.

Scientists believe water levels will increase more rapidly in the future and begin to pose a serious risk to low-lying and coastal areas.

Since the Sentinel-6 can provide a high-definition look at the coastline which was beyond the capabilities of previous satellites, this can help coastal communities and towns understand just how vulnerable they are to flooding and predict what might happen in the next 100 years as scientists warn floods could displace 200 million people around the world.

It’s crucial to have accurate information pinpointing areas that are most at risk because the threat is not uniform across the globe. Water levels aren’t rising evenly like in a bathtub.

Research shows sea levels on the US east coast, for example, are accelerating three to four times faster than the global average – potentially impacting cities such as New York and Miami.

By monitoring water levels, the Sentinel-6 can also act as an early warning system for detecting extreme weather. It can predict when the phenomenon El Niño will return by detecting the massive warm bulge in the cold eastern Pacific Ocean that causes intense rainfall in some areas and drought in others.

And when it comes to unpredictable weather, the satellite can improve hurricane predictions as it gathers information on atmospheric temperatures and humidity.

That will be more important than ever as higher water levels mean deadly and destructive hurricanes like superstorm sandy that rocked the US, the Caribbean, and Canada in 2012 could push even farther inland.

Sentinel-6 may be the most advanced satellite of its kind but it’s not the only set of eyes in the sky. It’s flying in the same orbit but 30 seconds behind its predecessor Jason-3.

Operating both satellites is helpful in order to cross-calibrate information. Once the Sentinel-6 mission winds down, its doppelganger Sentinel-6B will take off in 2025 to continue measurements for at least another five years.

Thousands of objects may have been launched into space but not many have such a peculiar look and not many provide such a comprehensive understanding of our planet and the risks faced by rising sea levels.

You can follow the Sentinel-6 satellite in real-time on NASA’s website which shows a simulated view of the location in our solar system.

Thanks for reading till the end. Comment what’s your opinion about this information “Why NASA Launched a House into Space”.