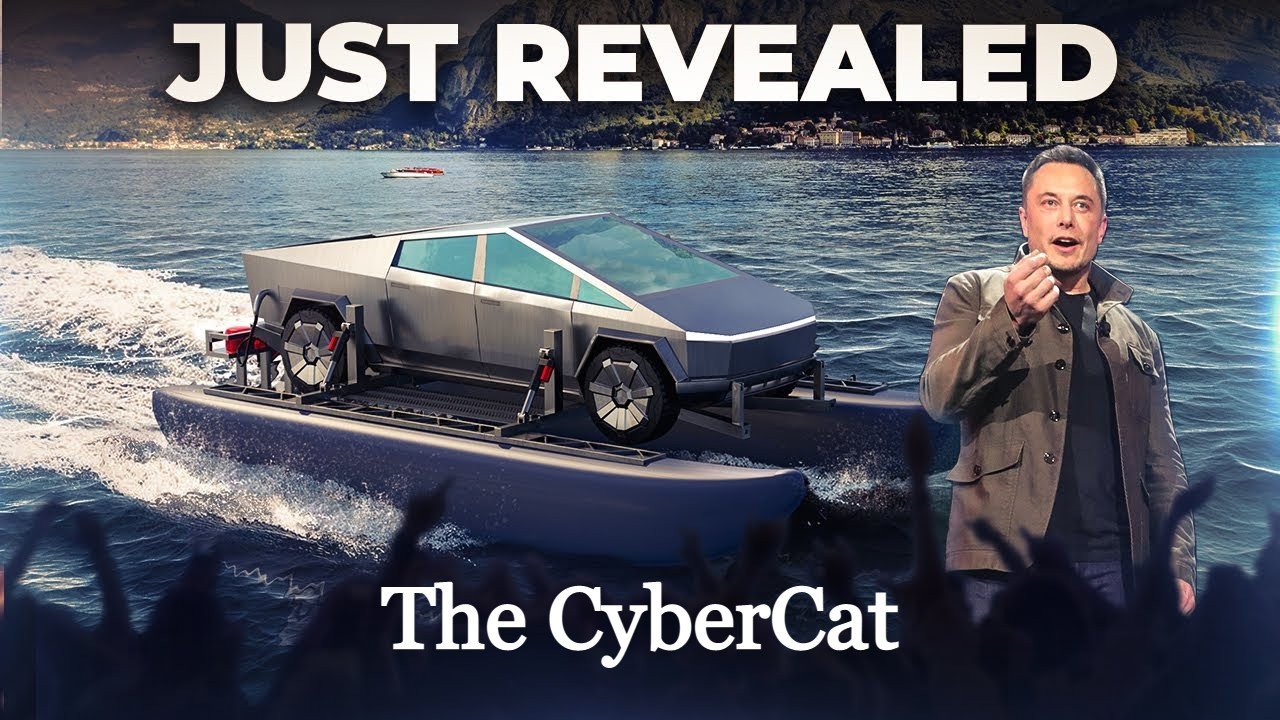 Elon Musk just revealed the crazy Tesla CyberCat: When the Cybertruck was revealed, what was your first impression? A Wall Street analyst said what many people felt when it first was shown. He said the Cybertruck looks very weird. The launch didn’t go without a hitch because the supposed bulletproof windows got smashed during the demonstration.

The Cybertruck has been described by many as something out of this world, something we haven’t seen. Musk has said that two movies inspired the design of the Cybertruck: Sci-Fi classic Blade Runner and the James Bond movie from 1977, “The Spy Who Loved Me.”

The movie featured a particular car, a 1976 Lotus Esprit car that doubled as a submarine. It seems that this same Lotus Esprit has influenced the design for a modified Cybertruck known as the CyberCat. Join us today as we take a look at this CyberCat and all the extraordinary things it can do.

The Tesla Cybertruck is the most anticipated model in Tesla’s lineup, but for some reason or the other, Tesla keeps postponing the launch date of the electric truck.

The Cybertruck has an angular design that many would see as too edgy, but for Musk, the Cybertruck reminds him of the White Lotus Esprit from the Bond Film “The Spy Who Loved Me.”

Musk has been so enamored by this car that he bought one of the actual vehicles used in the movie for a price tag of $997,000 at an RM Sotheby’s auction. Musk was disappointed to learn that his Lotus Esprit didn’t actually transform.

While he was a little kid in South Africa, he watched James Bond in the movie drive the Lotus Esprit off a pier before pressing a button and having it transform into a submarine as the car got submerged. After learning that the car couldn’t transform, Musk told Jalopnik that he would upgrade the Esprit with a Tesla powertrain and make it transform for real.

What do you do if you can’t afford a Lotus Esprit from the 1970s or one from the actual movie? Well, someone thought of that and took everyone’s favorite electric truck with the hope of turning it into a vessel for both land and the seas. This version of the Cybertruck will be dubbed the CyberCat.

Even though Tesla has disappointed its fans and pre-registered customers, the hype about the Tesla Cybertruck is still so much that third-party accessories are being developed for it. This is just one of the many attempts by engineers to create offerings that would elevate the vehicle’s appeal even further.

The CyberCat turns the Cybertruck into an elite, fully electric catamaran. We have a Seattle-based startup and American Materials Scientist, Anthony Diamond, to thank for developing this CyberCat accessory. The CyberCat is a Cybertruck equipped with a pair of attachable pontoons and outboard motors.

One person can install this accessory in less time than it takes to launch a boat. Apart from being an amphibious catamaran, there is an option for hydrofoil extension to maximize speed and efficiency on the water.

Using interconnecting sensors, pontoon pressure transducers, and power or data connections, the CyberCat can digitally verify whether the assembled pieces are correctly assembled before allowing the vehicle to touch the water.

The inflatable pontoons give the CyberCat 12 inches of ground clearance. Once you hit the surface of the water, the electric outboard motors, pontoons, and hydrofoils fold down while the wheels retract, allowing you to take off quickly. The CyberCat will be equipped with up to five 50 kilowatt motors to provide an output of 335 horsepower.

These motors would be powered by the Cybertruck’s battery pack. If you are in shallow waters or around the docks, the CyberCat can be maneuvered with ease using the wheel rotation of the Cybertruck.

The CyberCat with the added hydrofoils is called the CyberCat Foiler, and it can exceed 40 miles per hour by rising out of the water for improved hydrodynamics. The Cybertruck was presented in 2019, slated to reach the market in 2021.

Till now, the truck has faced one postponement or the other. The Cybertruck has to be available for sale before the CyberCat accessory can be offered for sale. The fact that the CyberCat looks like something conjured up by Desmond Llewellyn’s Q Branch from the James Bond movie franchise is not a coincidence.

The designer of the CyberCat, Anthony Diamond, has said that this accessory will pay homage to Elon Musk’s passion for the iconic 1976 Lotus Esprit from the James Bond Movie, also known as Wet Nellie.

Anthony believes that with over 1.3 million Cybertruck reservations, the market potential of the CyberCat is immense. He also pointed out that since you wouldn’t be using the CyberCat on land, the parts are designed to fit into the Cybertruck.

The firm which produces the Cybertruck, TSWLM Electric Vehicles Incorporation, is named after the movie that inspired this accessory. Designer Anthony Diamond has pointed out that the CyberCat is still patent-pending and is not a third-party aftermarket solution.

He added that the company intends to work directly with original equipment manufacturers (OEM) to bring the CyberCat concept to the market. TSWLM now accepts emails from interested people, so this concept doesn’t stay a concept.

From computer-generated images on the internet, your CyberCat can be retrofitted to suit your needs on the water. This fantastic invention is expected to retail for 23 to 33,000 dollars for the standard version, while the Foiler version costs around 36 to 43,000 dollars.

The CyberCat is not the only new concept that has been inspired by the Cybertruck. Let’s take a look at the CyberKat, a small electric snowcat designed to help you clear snow during winter.

The CyberKat is remote-controlled and was designed by Ryan Butler from a startup called Spyker Workshop. The CyberKat looks like a mini Cybertruck on tracks. It is fitted with wide tracks, which allows it to cut through thick white snow blankets. The CyberKat has a ground clearance of 4.25-inch, which lets it glide easily on uneven terrain.

The model features a plasma-cut Aluminum frame, and its 775 electric motor is powered by four 12 volt batteries. Spyker Workshop spoke about the CyberKat, saying its aluminum transmission can be set to high speed or high torque modes.

They haven’t released any specifications about the CyberKat, so we don’t know how fast it can go or how much power it would have. The CyberKat is complete with light bars, just like the original Cybertruck. It would also be equipped with the CyBlower, a device still under development.

The CyBlower can be mounted on the trailer hitch of the CyberKat, to help blow snow away. The CyberKat would be highly customizable, and customers are free to choose what types of batteries or electric motors they want. This Cybertruck inspired snowcat is already available for pre-order.

At a starting price of $1,299, you can get the CyberKat, but you have to spend an additional $120 for the electronic kit that powers it and an optional $80 to have a radio-equipped. Unlike the Cybertruck, which is long overdue, the CyberKat will ship to customers early in 2022.

If you think that’s all we have for you, have you heard about the CyberLandr, an ambitious high-tech camper designed for the Tesla Cybertruck? This is another Cybertruck accessory that has begun selling even though the Cybertruck hasn’t quite launched yet.

The idea is to have a camper sit on top of the truck or in a trailer that will be hitched to the truck. The CyberLandr is designed to fit into the Cybertruck’s bed, making it more efficient as it would have a smaller impact on the range of the vehicle.

The CyberLandr is very popular, and it has gained reservations worth over 50 million dollars in just weeks. The accessory is expected to cost about $45,000, and more than 2000 reservations which require a $100 to $5000, have been made. If you love the open seas, or you love the woods.

Sorry to all the electric truck fans out there. There have been several leaks showing the latest Cybertruck prototype, but there are a lot of issues Tesla needs to address before the public can feast their eyes on the electric truck or get behind the wheel.

Thanks for reading till the end. Comment what’s your opinion about this information “Elon Musk just revealed the crazy Tesla CyberCat“.