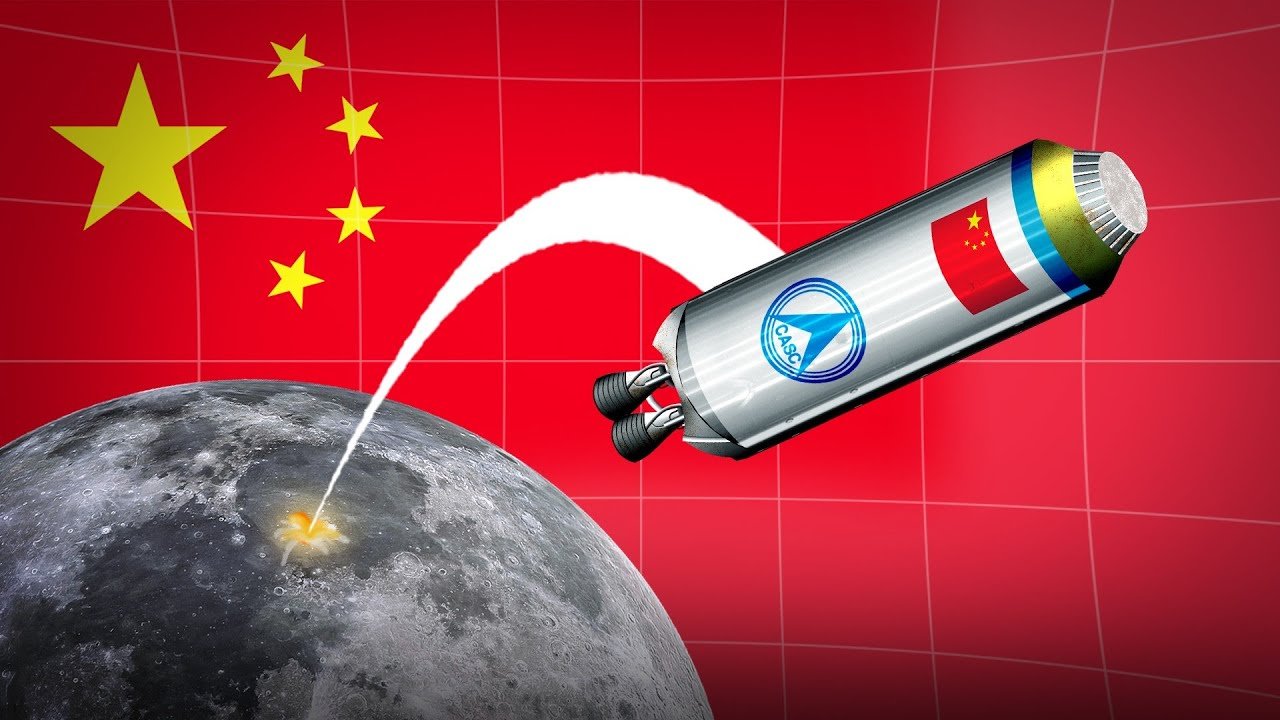 The First Accidental Moon Crash: On the 12th of February 2015, a Falcon 9 rocket lifted off from the Kennedy Space Center. This was SpaceX’s very first interplanetary mission, sending a climate observation satellite into space. But after deploying the satellite, the Falcon 9’s upper stage was left in a highly elliptical orbit around the Earth.

After spending 7 years in space, astronomers predicted that it would soon crash into the far side of the Moon. In this post, we’re going to look at how astronomers track these kinds of objects so precisely and why they were wrong about this one.

When a rocket deploys a satellite into Earth’s orbit, it typically performs a deorbit maneuver to safely slow the vehicle down until it burns up in Earth’s atmosphere. However, this particular rocket was launching a satellite out to Lagrange point 1, where the gravitational forces between the Earth and the Sun cancel out and hold objects in place.

Since this point is so far away, the Falcon 9 didn’t have enough propellant left to return and de-orbit around Earth. With enough time, objects stuck in this kind of orbit either collide with the Earth or the Moon – or they come close enough to receive a gravity assist, which slingshots them out into an orbit around the Sun.

But if this object really is a piece of space junk, it will be the first time that space junk has ever unintentionally collided with the Moon. In the past, scientists have purposefully crashed their space junk into the Moon, in order to retrieve data about the Lunar surface.

In 2009, NASA launched an observation satellite, in the hopes of detecting water on the Moon’s Southern pole. After separating from the satellite, the Centaur rocket stage purposefully crashed into the Moon at two and a half kilometers per second.

As the debris plume rose 10km above the Moon’s surface, the observation satellite went right through it and collected samples. The data showed many different materials were present, but most importantly, it confirmed that there really was water on the Moon.

When this object strikes the Moon, it’s unlikely that it will hit at a time and place that’s visible to any satellites. Predicting the exact time and place of the impact is a big challenge, especially since the object is only visible to us for small periods of time.

Initially, astronomers saw this object make a close flyby of the Moon. The object had the same kind of brightness you would expect from a rocket booster and showed up at the expected time. And so, this object was tentatively labeled as the Falcon 9 upper stage.

For 7 years, this object was basically forgotten about until the recent realizations that it might be heading straight for the Moon. Astronomers were able to predict the exact location of this object’s impact to within a few kilometers.

When predicting an object’s path with this much precision, even things like the Earth’s slightly weird shape can be very important. The Earth isn’t a perfect sphere. Due to its constant spin, it bulges out at the equator by 43km.

Although this is such a small detail, ignoring this information would change the location of the object’s impact by over 170km. Every now and then, the path of this object gets changed when it comes close to the Moon.

Some of these gravitational effects can be very small, but any inaccuracies early on in the predictions will accumulate and make the predictions way off. But what is perhaps even trickier to predict, is how the Sun’s radiation will affect the object.

The radiation which blasts out from the Sun exerts a small but constant force on objects in space, like a very gentle breeze. Artificial objects like rocket boosters, they’re very lightweight but still have large surface areas. This makes them much more susceptible to solar winds than a dense and heavy asteroid.

Astronomers were able to measure how the light from this object varies, giving them a light curve that shows the object is rotating once every 90 seconds. With this information, astronomers can quite precisely plot the object’s path for the near future.

On the 1st of January, the object made a close flyby of Earth before climbing back up to its apogee beyond the Moon. On the 5th of January, it came within 10,000km of the Moon, which pulled the object in and changed its orbit slightly.

It then made another two orbits of Earth before being thrown into a much larger loop. From then on, the object will reach its apogee for the final time before crashing into the far side of the Moon on the 4th of March at around 2.6 km/s.

Despite being able to predict the impact with so much precision, astronomers were completely wrong about the actual identity of the object. After re-analyzing the trajectory of the Falcon 9 launch, they realized that it wouldn’t have made such a close flyby of the Moon.

And so, astronomers tracked this object’s orbit back and found that it had a possible match with the Chinese Change-5 mission, which launched just a few months before the Falcon 9. This mission launched on a Long March 3C rocket and sent a spacecraft around the Moon and back to Earth.

The rocket booster would have made a close flyby of the Moon about 4 days after launch. Tracing the orbit back even further showed that it was parked into a Lunar transfer orbit, which is common for rockets going to the Moon.

What’s even more impressive is that the ground path of this orbit could be traced back to an area near the Chinese launch site of Xichang and shows the object heading East. This is exactly what you would expect from a Chinese mission to the Moon.

Despite being able to track this object so precisely, the impact itself will be unobservable to our ground-based telescopes, since this side of the Moon never faces Earth.

Eventually, though, some of the satellites that orbit the Moon will pass over that area and image the newly formed crater. This old rocket booster will become just another piece of space junk left on the Moon.

Perhaps in hundreds of years when humans have a higher presence on the Moon, this rocket stage might be discovered in the same way that we discover old fossils here on Earth. When humans finally return to the Moon, they will have the incredible chance to reunite with the lost space junk of the Apollo 11 mission, which has been perfectly preserved on the Moon for over 50 years.

Thanks for reading till the end. Comment what’s your opinion about this information “The First Accidental Moon Crash“.

4 thoughts on “The First Accidental Moon Crash – Take A Look”