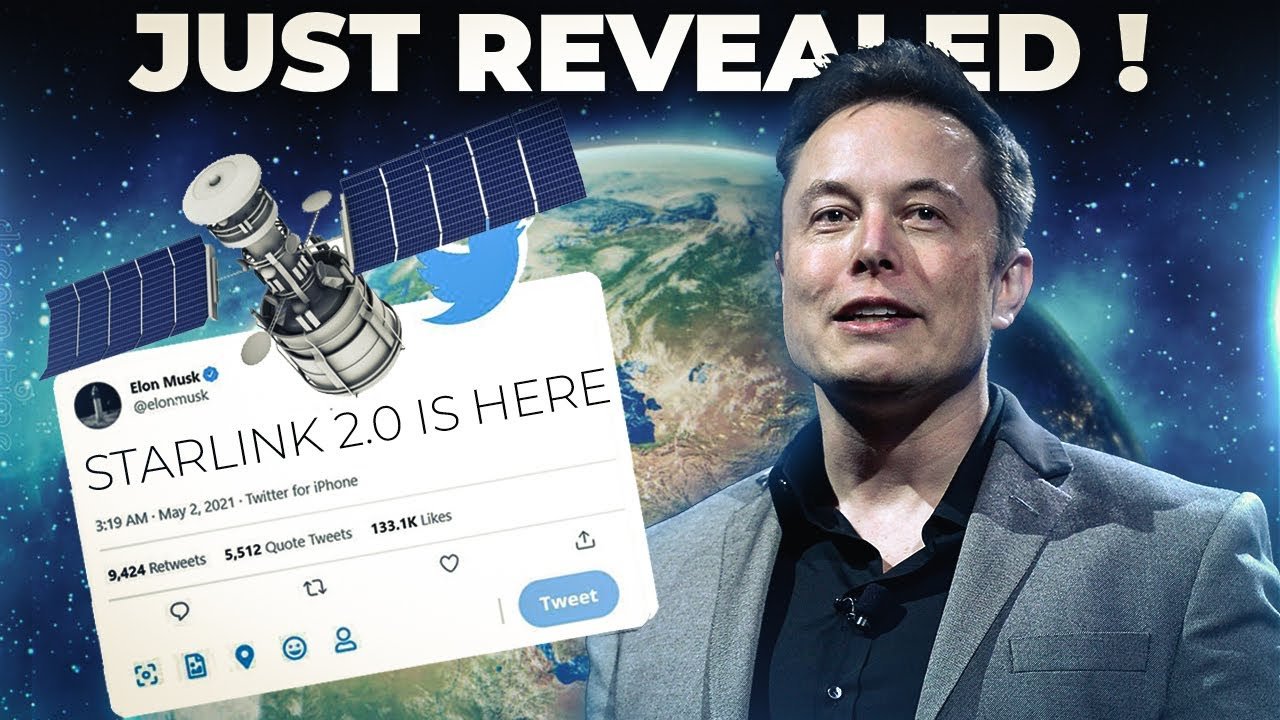 You Won’t Believe “How Fast the Next Gen Starlink Network Is”: Whoever you are, reliable super-fast internet will always be beneficial to you no matter what. There are few things more satisfying than being able to access the internet instantly, as you watch the web pages appear instantly and online videos streaming at 4K full HD.

Of course, that’s what Elon Musk is promising to you with Starlink. We all know the basics, being that Starlink is an ambitious plan to provide super-high-speed internet anywhere in the world with swarms of satellites constantly in orbit around the Earth. Some of these satellites are already in orbit and running, but Elon Musk is now taking it up a notch with Starlink 2.0.

SpaceX has abandoned previous plans to utilize the Falcon 9 to launch the 30,000 satellites that will make up its projected second-generation Starlink broadband constellation in favor of a configuration based on its future Starship spacecraft. ‘Second generation’ being the next iteration of the Starlink satellites, an upgrade from what’s currently in orbit.

The decision follows development progress that SpaceX said exceeded the company’s expectations and means it could start “launching the Gen2 system as early as March 2022,” SpaceX lawyer William Wiltshire said in a January 7th letter to the Federal Communications Commission.

SpaceX has received FCC approval to launch 4,408 satellites into low Earth orbit at a height of roughly 550 kilometers and has already launched almost half of them. SpaceX’s plans for a larger, second-generation constellation have yet to be approved by the FCC.

Now that it has decided on the Starship-launched design, SpaceX has asked the FCC to expedite approval. “Just as terrestrial wireless networks meet customer demands by operating more than one generation of technology simultaneously.

SpaceX plans to use both of its networks to provide superior service,” Wiltshire wrote. “SpaceX will continue to maintain its first-generation system, launching replacement satellites as appropriate to sustain the orbits in which it operates, even as it conducts the initial deployment of the Gen2 system.

A SpaceX customer user terminal will be able to receive service from satellites of either system” he further stated. There we have it. SpaceX is already quite prepared to send an improved and updated version of their Starlink satellite into orbit.

This indicates that the project is going forward healthily and satisfactorily for Elon Musk’s ambitions. Where do his ambitions reach for? His ambitions for Starlink aren’t just contained to providing the fastest possible internet service even to extremely remote locations such as in the middle of the Sahara Desert or the Polar regions.

Neither are they solely limited to a zero-sum goal of becoming one of the largest internet service providers on the planet. Gwynne Shotwell, president of SpaceX, talked about how his company’s Starlink satellite internet provider could assist Elon Musk to realize his much-discussed Mars dreams.

Shotwell was asked to explain his thought process when Starlink was first conceptualized in an interview with Via Satellite. She responded by saying Musk had been thinking about it for a while.

Thus, the global internet market is highly lucrative, much more so than the aerospace industry. She further added: “If you want to help fund long-term Mars development programs, you want to go into markets and sectors that are much bigger than the one you’re in, especially if there’s enough connective tissue between that giant market, and what you’re doing now.

According to Tesmanian, a Tesla-focused news site, if SpaceX acquires 25 million Starlink subscribers, it will make around $30 billion in annual revenue. This is ten times the amount the firm makes as a launch provider.

Attempts to provide satellite internet to consumers in the past have failed due to the exorbitant expense of the high-tech antennae required to deliver and receive data. In the last two years, SpaceX claims to have cut the cost of producing their terminals from US$3,000 to US$1,500.

Even for clients in wealthy countries, Starlink’s monthly fee of US$99 is not cheap. However, it’s worth noting that Musk’s vision of progress is mostly motivated by cost reduction. As we can see with the Gen2 satellites being deployed, this is likely to become the norm in the future with the monthly fee slowly reducing down to a more acceptable rate.

Therefore, it can be safely said that at this point, SpaceX’s entire future plans have in mind the potential widespread success of Starlink. The question to consider now would be related to its viability. In 2020, Starlink went into beta testing and is currently available in 14 countries.

The US Federal Communications Commission awarded SpaceX $886 million in December as part of its Rural Digital Opportunity Fund (RDOF), which subsidizes US telecom companies who are creating infrastructure to help rural areas receive internet access.

However, it’s unclear whether rural America will be a profitable consumer base for Starlink. The cost is the most pressing concern. A Starlink subscription costs $99 per month. Although speeds vary widely, the average user should anticipate receiving 50 to 150 megabits per second.

To acquire the same speeds, you’d have to pay twice as much to standard satellite internet providers like Viasat, so Starlink wins there The upfront cost of Starlink, on the other hand, will be the most difficult to bear.

The cost of the satellite dish and router, for example, is $499, and the equipment is sold at a loss to customers. Elon Musk has previously stated that he hopes to bring these costs down to $250. The price is simply too high right now for much of the rural world, both in America and overseas.

The US military is more likely to be among the first clients, given it frequently relies on geostationary satellites, which have crowded service and significant latency when operating in remote places. Starlink is being tested by both the Air Force and the Army.

Starlink is also being considered by airlines that want to provide passengers with quicker and more stable in-flight Wi-Fi. Other commercial enterprises in rural areas might find it useful as well. Of course, there are techies and curious clients in the suburbs and cities who have the financial means to test it out.

By concentrating on these possible early clients, SpaceX will be able to more quickly iron out the kinks and focus on price reduction. Starlink could be a boon to underdeveloped portions of the world, as many of these areas lack physical networks like the cable system that the United States built in the 1970s, 1980s, and 1990s.

However, beta testing is currently only available in the United States, Canada, portions of Europe, Australia, New Zealand, and Chile. It’s too early to say how much of an impact it will have in developing countries, especially if subscription and equipment costs remain high.

Even if Musk is successful in appealing to a viable customer base and profiting handsomely, there is another issue he will have to clear at some point. SpaceX’s plan for a Starlink mega constellation with up to 42,000 satellites has been criticized.

A new analysis of observations by the Zwicky Transient Facility (ZTF) in Southern California, which is meant to seek for supernova explosions as well as asteroids passing very close to Earth, found that Starlink satellites have been affecting twilight observations more and more.

According to the scientists, the ratio of damaged twilight photographs climbed from 0.5 percent in late 2019 to 20% in late 2021 as the number of Starlinks aloft increased.

According to Hugh Lewis, the head of the Astronautics Research Group at the University of Southampton in the United Kingdom, Starlink satellites are involved in roughly 1,600 close contacts between spacecraft per week, accounting for 50 percent of near-collisions in orbit. In light of this, you may recall the recent snafu with Starlink satellites and Chinese spacecraft coming dangerously close to colliding.

It’s a major problem that requires immediate attention, and it’ll only get worse. Finally, we have something a little disheartening to say. The most recent 49 satellites were launched at a height of around 210 kilometers (130 miles) above the Earth’s surface.

After being launched on February 3, SpaceX stated that “each satellite achieved controlled flight.” The geomagnetic storm, on the other hand, struck the Earth a day later. It’s the same mechanism that causes aurorae, such as the Northern Lights, but it may also be deadly.

The atmosphere was warmed by this storm, which made it much denser than expected. The satellites were entered into a safe mode, in which they flew in a change orientation in order to reduce drag, a result of the aforementioned increased density.

The fight to stay active for the satellites was desperate but to no avail. They were knocked out of orbit and have fallen to Earth, burning up in our atmosphere.

SpaceX has not publicly revealed how they’re going to deal with massive geomagnetic storms, especially since these satellites are expensive and are already seeing upgrades.

Of particular interest should be the measures in place to reduce disruption but more importantly, how SpaceX’s plans for profit may be affected too. Starlink’s future is definitely going to be on a careful balance. But hey, Tesla and SpaceX both were at that stage too.

Thanks for reading till the end. Comment what’s your opinion about this information “You Won’t Believe “How Fast the Next Gen Starlink Network Is”.