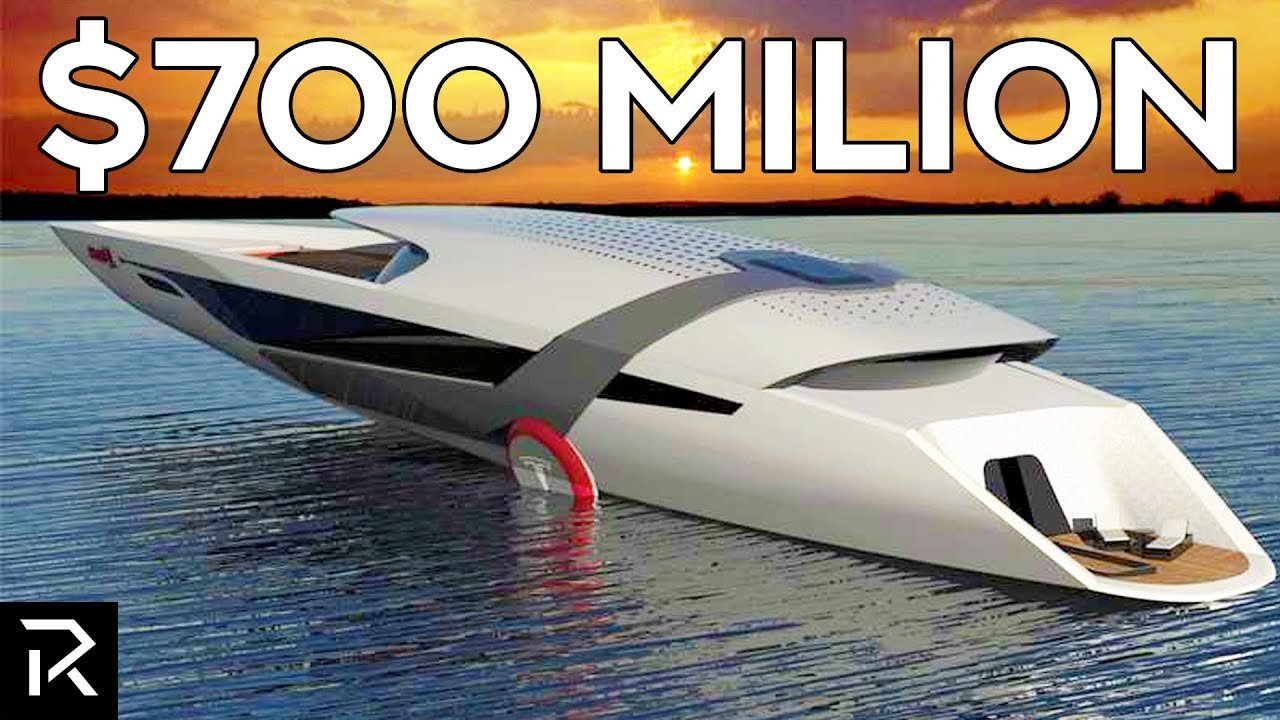 The World’s First Nuclear-Powered Superyacht: 300 meters long, 60 meters high, it is bigger than the Titanic. It runs on an exciting new breed of a nuclear reactor, packs the latest quantum computers, and its luxury bunks are adorned by the brightest minds and richest industrialists on the planet.

Is this mission? Nothing short of saving the world. but how? Join us today as we weigh anchor for a journey on the first nuclear superyacht.

There has never been a ship like the Earth 300. On the sheer scale of a cruise liner, rocking the sensual lines of couture stilettos, it will be a triumph of ambition over mediocrity when it sails from an unknown shipyard in four years.

Designed by superyacht veteran Ivan Salas Jefferson, the Earth 300 will carry 450 wide-eyed adventurers across the seven seas, serving as a novel mix of the research vessel, deluxe pleasurecraft, and floating intellectual saloon.

Because as radical as the design is – this cantilevered observation deck, that glassy spherical superstructure – the role of the Earth 300 is truly revolutionary.

Founder and CEO Aaron Oliveira found his calling in avant-garde cruise ships when he visited the Maldives in 2015.

Taking time off from his day job, developing upmarket tourist resorts, Oliveira went scuba diving and was heartbroken to see the man-made bleaching of coral reefs for the first time. Realizing in an instant that ‘the world doesn’t need another resort’, he challenges himself to work to inspire civilization in the fight against climate change.

Oliveira envisions an iconically beautiful floating science hub, where cutting-edge experiments by the world’s most ingenious researchers take place in a super-prime luxury environment. How can such a craft be funded?

Oliveira’s daily stock in the business, by wealthy tourists. And he’s gambling that 2025 will well fall upon itself for the chance to celebrate the holiday in the presence of scientific greatness.

That’s what this mildly sinister circle on the back is all about – a thirteen-story science section, consisting of 22 state-of-the-art laboratories that conduct cutting-edge research in a variety of disciplines such as climate science, AI. Medicine, and marine biology.

Naturally, customized equipment has been decked out along with the latest gear like 3D printers to prepare. A fleet of underwater ships tucked into their slender hulls will help 160 scientists gather data, while one of the first working quantum computers – arguably the first ocean model – will crunch the numbers.

The international media, the theory goes, will be so moved by this seafaring faculty that it will help inspire a wave of bold thinking on climate change.

When success after success is shared with individuals and institutions through Earth300’s generous open-source data-sharing model, the discussion will spread. But the ship’s complement won’t be the only white-coated nerds on test tubes.

Banking each trip will be 40 or so high-rollers, who will spend $3 million for the privilege of a ten-day cruise in the lavish suites of Earth 300, each with a plush balcony. There will also be separate cabins for the crew and staff of wealthy passengers.

A more modest class of lucky VIPs – or ‘Very Interesting People’, as Earth 300’s breathless press release calls it – will ride for free.

Oliveira aspires for artists, activists, explorers, economists, and students alike to take their place at the dinner table with resident boffins and billionaires. Imagine Greta Thunberg hooking up with Obama while Elon Musk has a drink.

Anyway, designer Evan Salas Jefferson hopes his diverse guests thrown together in such a spectacular setting will collectively be nothing less than an ‘alchemist of global solutions’.

Apart from Earth’s fleet of 300 experiments – perhaps no different than the kind you’d find on the International Space Station – the ship itself would represent a giant leap forward in maritime architecture.

Quantum computing at sea is an ambitious enough prospect in itself. But the vessel’s power plant – a so-called ‘molten salt reactor’ – would be a game-changer if they pulled it off.

Viewed by some – the Bill Gates-funded firm TerraPower – as a potentially revolutionary technology, the molten salt reactor holds the promise of safe nuclear power for power-hungry self-contained applications. Like big fancy ships.

The molten salt reactor has few moving parts, and almost no cost is incurred, which makes it far safer than conventional nuclear power plants. It also assisted operating at normal, ambient atmospheric pressure.

This means that several tons of heavy external nuclear hardware can be removed. If Oliveira and his team successfully manage this one aspect of their plan, it will serve as compelling proof of concept and inspire much-needed decarbonization in the marine economy.

Which, for context, is currently responsible for over a billion tons of CO2 emissions every year. So how excited should we really be? Critics say the Earth 300’s onboard quantum computer isn’t worth the trouble.

Especially now, when high-speed satellite connections and remote data centers provide more than enough processing power at a significantly lower cost. The notion that any government would approve a civilian boat with a nuclear reactor is also a bit hypothetical.

New Zealand, for one, banned nuclear-powered craft in 1984. Laboratories certainly need to rest frequently, a time-consuming logistical headache on a ship that will likely earn most of its life on a distant stay.

Earth 300s First Voyage, As You Ask, is a deluxe circumnavigation of Antarctica. Other skeptics take a peek at Oliveira’s ambitious schedule.

His project has some tough engineering hurdles that have to be overcome in less than five years. And there’s the cost, which Oliver’s team believes will be no more than $700 million, but experienced nuclear hands think closer to $3 billion.

Nevertheless, legitimate backers such as IBM have temporarily aligned themselves with the mission. And with basically every single climate scientist shouting that the time for action is now, this kind of big-ticket out-of-the-box thinking should probably be encouraged.

As the non-Russian Aaron Oliver himself puts it: ‘We are living at a pivotal moment in human history, facing the greatest challenge to civilization since the beginning of mankind.’

‘We believe that scientists deserve to be treated like rock stars – because they are. ‘Imagine an object that propels people around the planet … capturing people’s attention but also their hearts and imaginations. ‘Where we come together and solve problems… a place to dream and dare.’

Now there is a man who has the burden of ambition. what do you think Will the answer to solving climate change be found in the form of a thirsty Instagram flex crafting important research? Do let us know in the comments.

Thanks for reading till the end. Comment what’s your opinion about this information “The World’s First Nuclear-Powered Superyacht”.