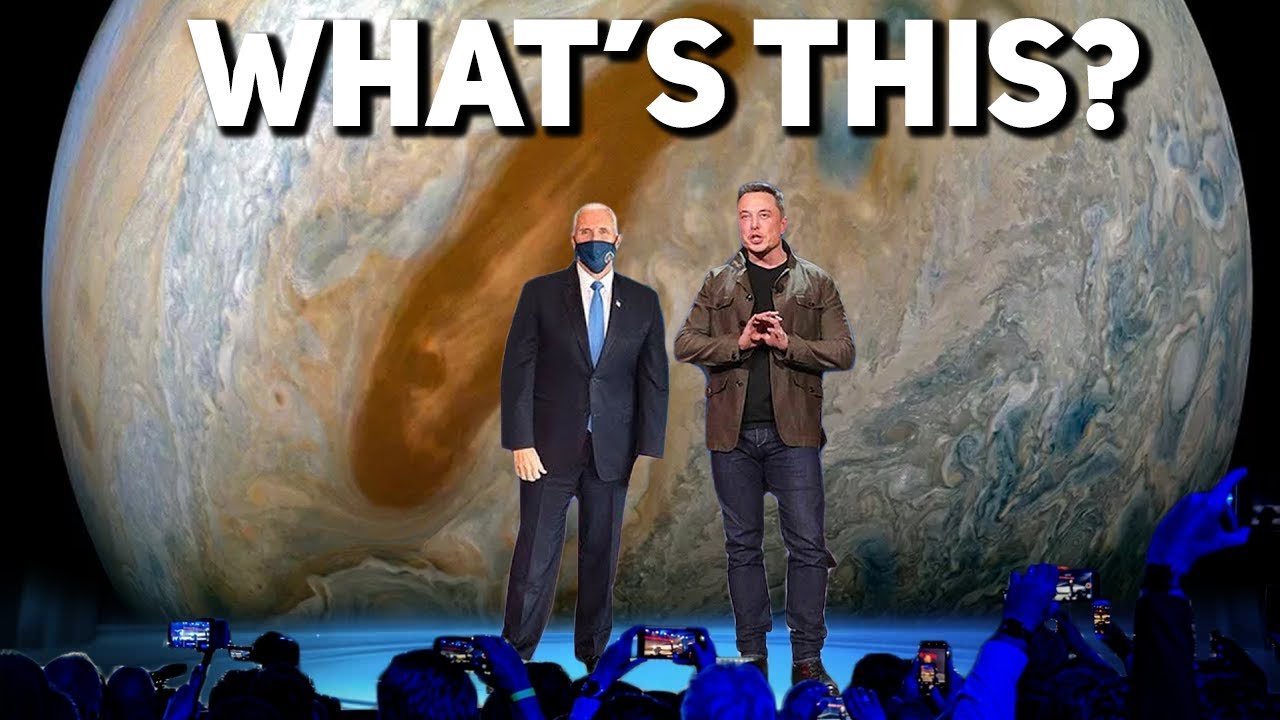 New Insane Discovery On Jupiter By Elon Musk & NASA: Jupiter is named after the king of the Roman gods. This planet is the largest in our solar system – it is more than twice the other planets’ size combined. Jupiter looks peaceful and beautiful from afar, but you begin to notice the chaos as you get closer.

The iconic great spot on the planet is a giant storm that has raged for hundreds of years, and its sheer size surpasses our entire planet, Earth. Using measurements from the Juno spacecraft, which orbits Jupiter, scientists have been able to construct a 3D model of what the atmosphere on Jupiter looks like.

These conjured images reveal things that have scientists a tad bit worried. In today’s article, we’ll tell you what the Juno spacecraft discovered, and we will also look at Elon Musk’s involvement with NASA on these explorations to Jupiter. So stay glued to your device; you have to read this to the end.

Jupiter isn’t just the largest planet; it has the most moons and the strongest magnetic field. Astronomers have known about Jupiter for a while, and inventions like the telescope and the development of modern astronomy have taught a great deal about this planet.

There have been several missions to Jupiter to study the massive planet and its many moons. The first mission embarked upon by NASA was Galileo. Galileo was launched on October 18, 1989. The mission aimed to study Jupiter and its moons; it was accomplished, but Galileo became notable for the discoveries it made on its journey to this gas giant.

On August 5, 2011, NASA launched a mission, Juno. The Juno spacecraft was tasked with an in-depth look at what lies beneath Jupiter’s dense clouds. Juno entered Jupiter’s orbit on July 4, 2016, and its discoveries are amazing and shocking.

These were direct missions focused on Jupiter by NASA, but there have been numerous flybys by other spacecraft, making Jupiter the most visited planet in outer space. Sending a vessel into Jupiter’s orbit is tough.

The planet has a severe radiation environment and huge fuel requirements. However, in June, NASA announced that it had chosen SpaceX to launch its next alien-hunting mission to Jupiter’s moons. The moon in question is Jupiter’s frozen moon Europa. This is a significant achievement for SpaceX because it means they would be moving deeper into the solar system.

The Europa Clipper mission will launch from the Kennedy Space Center in Florida sometime in October 2024. It will launch on a Falcon Heavy rocket, and the contract value is somewhere north of 178 million dollars. This mission is still in motion and doesn’t have any significance to Jupiter.

Using the data collected from Juno, scientists have constructed a 3D image of Jupiter’s atmosphere. These scientists use microwave lights to look deep beneath all of Jupiter’s colorful clouds. This way, they can comprehend the weather and climate in the inner layers of the planet.

The spacecraft orbiting Jupiter has revealed a complete view of how the planet’s distinctive and colorful atmospheric features disclose information about the activities occurring beneath its clouds. The Juno spacecraft has been circling Jupiter since 2016, beaming photos back to earth.

Juno’s flybys around Jupiter have yielded important discoveries; we now know that most of Jupiter’s lightning is concentrated at its North Pole. Juno also discovered that there are storms that tend to appear in symmetric clusters in Jupiter’s poles.

The planet also has powerful auroras that produce ultraviolet lights invisible to the human eye. Juno’s measurements have helped scientists deduce why these auroras form in the first place. They form when electrically charged atoms or ions surf the planet’s magnetic field before crashing into the atmosphere.

The most sought-after planet for other sources of life is Mars, but it seems moons in the outer solar system like Ganymede also have the potential to support life. Beneath those icy exterior shells, these frozen moons like Europa, Ganymede, and Enceladus are perceived to harbor oceans of water.

Ganymede, in particular, is an attractive and dynamic astronomical target. It has a magnetic field which is a vital protective shield for life. Jupiter’s most recognizable feature is the Great red spot. It is an anticyclonic storm with a diameter of 24,000 kilometers and a height of 12 to 14 thousand kilometers.

This storm is located south of Jupiter’s equator, so it has enough space to hold two to three planets with diameters similar to Earth’s size. The location of the great red spot has been known since the 17th century; its discovery dates back 350 years.

The great red spot was first discovered in 1665 by Giovanni Cassini, an Italian Astronomer. Astronomers have developed the theory that this storm is caused by Jupiter’s turbulent and fast-moving atmosphere. In the 20th century, Voyager 1 had an up-close view of the giant red spot during its flyby of the planet in March 1979.

The flyby confirmed those predictions. But there were some observations; it looks like the storm seems to have shrunk. When it was first observed in the 17th century, the size was believed to be about 40,000 kilometers. Based on Cassini’s measurements, this storm is already half its original size.

Scientists are confident that the storm is reducing, they are unsure if it will completely vanish, but they are sure that another one will take its place somewhere else on the planet. Since its discovery, scientists have been fascinated by this crimson vortex.

New findings have shown that this storm is far taller than previously thought. This storm has a dark secret. Dozens of smaller storms slammed into the Red spot, but they didn’t do anything damage; it’s like they served to feed the great storm. Could this storm be eating up smaller storms?

Since 2019, the red spot has been struck by more than two dozen smaller storms every year. Thanks to Juno, scientists at NASA got front row seats at the action. These smaller storms cause some measure of superficial damage to the red spot only to dissipate, but measurements from deep within the atmosphere show that the red spot gains energy from each encounter.

Juno has flown around the great red spot twice, looking for the storm’s gravity signature and studying the concentration of air mass within it. Scientists were able to quantify the velocity difference as small as 0.01 millimeters per second using a NASA Deep Space Network tracking antenna from a distance of more than 400 million miles.

This helped the team to constrain the depth of the great red spot to about 300 miles below the cloud tops. According to Marzia Parisi, a Juno scientist with NASA, the level of precision necessary to calculate the tremendous red spot’s gravity during the July 2019 encounter is mind-boggling.

Being able to ass to MWR’s (Microwave Radiometer) depth finding gives us great confidence that future gravity experiments at Jupiter will produce equally fascinating results. Jupiter’s great red spot is only one of Jupiter’s well-known patterns in its atmosphere.

Another feature is its distinct belts of certain colored clouds. These colored clouds are formed by powerful winds blowing in the opposite directions for each belt. An investigation of this phenomenon is one of the primary objectives of Juno’s mission.

The spacecraft carries a specially-designed microwave radiometer (MWR) to measure emissions from deep within the solar system’s largest planet. NASA uses this instrument to examine the nature of these belts and zones by looking farther into the Jovian atmosphere than anyone has ever done before.

The MWR can probe the atmospheres at pressures starting at the top of the atmosphere near 0.6 bars to pressures exceeding 100 bars, around 250 kilometers deep. By tracing the ammonia, we have discovered circulation cells in both the north and south hemispheres that are identical to Ferrel cells that regulate much of Earth’s climate.

While we have one Ferrel cell per hemisphere, Jupiter has 8, with each one being about 30 times larger. This was explained by Karen Duo, the lead author of an article published in the journal science about Jupiter’s ferrel-like cells.

Data from Juno has also revealed that the belts and zones transitioned 65 kilometers beneath Jupiter’s water clouds. According to NASA and the Junk crew, Jupiter’s belts shine brighter in microwave light than the surrounding zones at shallow depths.

At lower depths, the opposite is true, revealing a likeness to our seas. Jupiter’s belt glows with microwave emission at the cloud tops, but the zones stay dark. Scientists believe that something is changing with depth in Jupiter. They are not sure yet whether it is the abundance of ammonia or physical temperatures.

Hopefully, more precise images will be revealed when NASA embarks on future missions to Jupiter. Juno will have more years to assess these storms and Jupiter’s other features.

It will also have the opportunity to look at its surrounding moons as it continues its extended mission, which will last till 2025. Luckily, NASA might extend Juno’s mission by more than 16 years after it launched.

Thanks for reading till the end. Comment what’s your opinion about this information “New Insane Discovery On Jupiter By Elon Musk & NASA“.