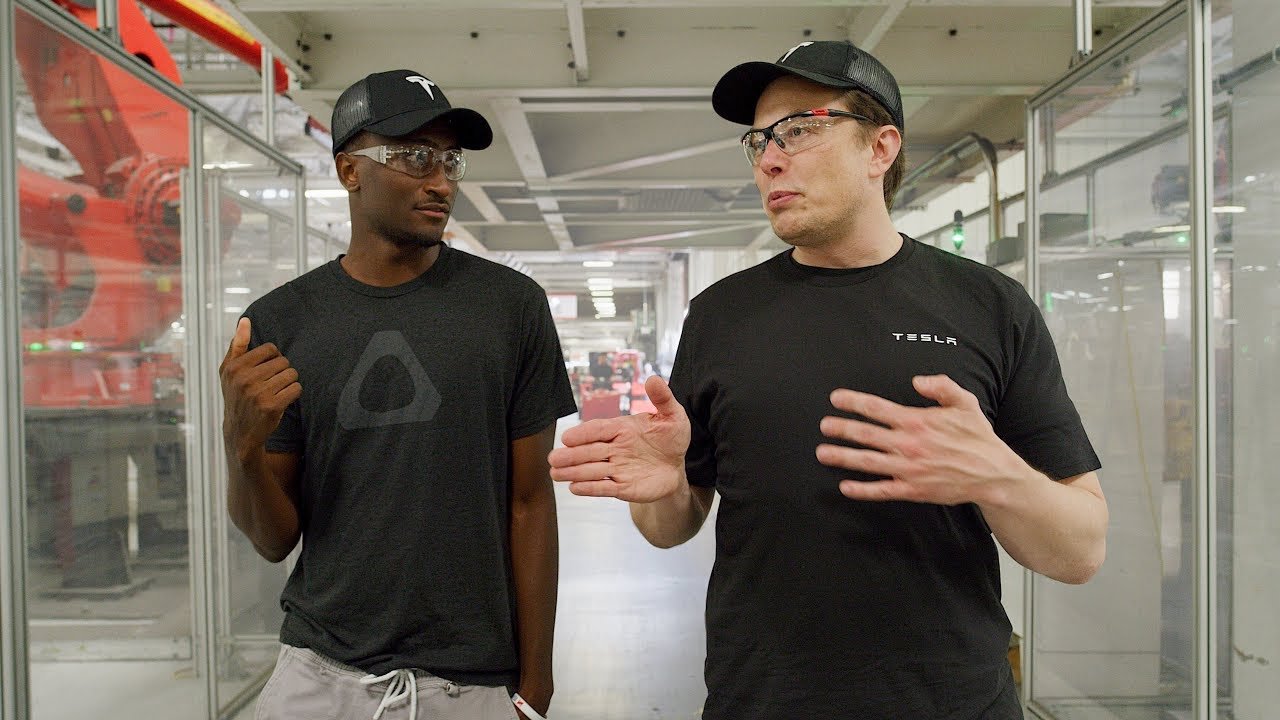 What Elon Musk Just ANNOUNCED About Tesla Changes Everything:- The automotive industry’s future is undeniably electric. Legendary manufacturers such as Ford are beginning to electrify their product lines. Within the next two decades, the majority of major manufacturers have committed to stop producing vehicles that run on fossil fuels entirely.

Thanks to Tesla and other manufacturers’ efforts, electric car sales are already on the rise. Tesla is known for creating world-class innovations that are redefining the automobile industry by releasing cutting-edge features and technological breakthroughs at a breakneck pace.

Tesla has dominated the electric vehicle industry in its native nation for years. Tesla’s market dominance is projected to erode as more EV choices become available and help boost the US industry, but for the time being, the US EV market is still reliant on Tesla.

The automobile sector has seen a tremendous amount of technological advancement and progress in the last five years. The autopilot, or self-driving, the function is the newest technology being discussed. Tesla, the electric-only car business, was the first to offer this technology to the automobile market.

For decades, the term ‘autopilot’ has been used in the aircraft industry to assist pilots to minimize their cognitive burden by allowing an aircraft to virtually fly itself during “cruising” portions of the journey.

Cars with autopilot are fast evolving into more autonomous, self-driving vehicles, allowing drivers to let the cars drive themselves on some segments of the trip, such as freeways.

He’s been talking about it for years, yet his excitement appears to outstrip Tesla’s engineers’ ability to polish the brand’s Full Self-Driving Capability.

In a recent interview, though, Musk went so far as to remark that figuring out full self-driving is the difference between Tesla being “worth a lot of money or worth basically zero.” Musk may have disappointed some fans and investors recently by shifting his attention away from Tesla’s vehicle-related endeavors and toward a humanoid robot.

Despite this, he has emphasized the importance of the company’s efforts on complete self-driving. During a recent interview, Elon Musk underlined that Tesla’s main emphasis is still “solving” technology.

As you’re undoubtedly aware, Tesla is now testing its FSD Beta system on public roads with a restricted group of owners. The firm may have over 100,000 owners who are putting the technology to the test in real-world scenarios.

Indeed, Musk recently stated that Tesla was adding 100,000 beta testers, and he previously stated that there were 100,000, implying that the number might now be up to 200,000. On the other hand, Tesla hasn’t released any official figures in a long time.

Tesla has been offering an FSD package for up to $12,000 that includes a few driver aid functions as well as the promise that self-driving capabilities would be enabled through future software upgrades.

Tesla has missed a number of dates in this area, and it is unclear whether the corporation will be able to deliver on its pledge.

Most recently, Musk lowered the bar to 1 million individuals enrolled in Tesla’s FSD Beta program by the end of the year, although the FSD Beta is not a self-driving system because it requires a driver to monitor the system at all times and be ready to take control at any time.

Musk spoke with a group of Tesla supporters, including hosts from Tesla Owners Silicon Valley, The Kilowatts, and Eli Burton, the creator and president of My Tesla Adventure (otherwise known as Starman).

This comes as the stock market is said to have entered a bear market, with Tesla’s stock price well below its all-time high.

Tesla’s valuation has dropped despite being by far the most successful EV manufacturer in the world and one of the few automakers to successfully handle the worldwide pandemic and chip and supply crisis.

Self-driving cars will make transportation considerably simpler and give personal mobility to groups of people who are currently unable to drive a car on their own. This should lead to an increase in the number of automobiles on the road, which, as Musk projected, would result in more traffic.

Self-driving vehicles would surely reduce the frequency of “phantom traffic jams,” which are one of the most annoying things that drivers encounter on the road, even though this is true. Bad drivers who stop too late are the most common source of phantom traffic bottlenecks.

If the road is already crowded, a driver suddenly slowing might easily prompt several other vehicles to follow suit, causing an immediate jam. Late braking can be caused by a motorist not paying attention to the road or speeding, much as other improper driving practices.

Phantom traffic bottlenecks are anticipated to disappear once self-driving cars are widely used since these vehicles and systems, like FSD Beta, are designed to follow traffic regulations. Overall, Musk’s assertion that more cars on the road will lead to increased traffic may be accurate.

However, it may not be all black and white, as congestion caused by human mistakes is anticipated to reduce as self-driving devices become more common. At this point, it’s important to note that there are five degrees of driving automation, or six if you count Level 0, which indicates the car has no automation at all.

The adaptive cruise control and Lane Keep Assist capabilities are included in Level 1. ALKS is at Level 2, which is referred to as “Partial Automation.” Even around turns, the driver must retain their hands on the wheel, ready to take control if required, but the car can handle speed and direction.

We’re at Level 3 now, and we’re starting to come close to self-driving. This will only be possible under ideal situations, such as on highways, and at specific speeds. The driver must still be ready to take control if necessary, but their hands do not need to be on the wheel all of the time.

Level 4 is on the verge of achieving full autonomy. You may enter your address and the automobile will navigate to it without your assistance. This has been proven in testing, but restrictions prevent it from being published just yet.

Level 5 is similar to Level 4 but requires no human input, eliminating the necessity for a steering wheel or pedals in the vehicle. Tesla’s “Full Self-Driving” capability complements the Autopilot suite of advanced driver support systems (ADAS).

Full Self-Driving adds the ability to drive semi-autonomously on city streets and in residential areas, while Autopilot navigates highways and conducts instrument-guided maneuvers at interstate speeds.

Autopilot and Full Self-Driving, when used together, minimize the entire burden of operating a car, improving safety and convenience.

Eight exterior cameras, 12 ultrasonic sensors, and a strong onboard software system are used to allow semi-autonomous capabilities on motorways, byways, and local roads. Tesla Vision is used in the Model 3 and Model Y vehicles, although radar is still used in the Model S and Model X.

Tesla’s ADAS approach does not include the use of Lidar. Elon’s remark is intriguing, especially given the fact that many people are skeptical about Tesla’s ability to deliver on its self-driving claims.

More and more people are speculating that Tesla will need to change its hardware before it can produce a genuine self-driving system via software upgrades. Keep in mind that whatever Musk says should be taken with a grain of salt.

While the CEO’s optimism is likely to have helped Tesla become as successful as it is today, his timescale projections are sometimes overestimated. While Musk appears to be confident in his projections, Tesla’s engineers have repeatedly demonstrated that they are unable to satisfy Musk’s objectives within the timelines he has set.

However, most of those projections were made before Tesla established its beta-testing program and began putting out frequent technical improvements. On the other hand, I don’t believe anyone can deny that Tesla would be extremely valuable if it could solve the problem.

Tesla would unleash hundreds of billions of dollars in value in its customer fleet and make every vehicle it makes today substantially more valuable if it can enable a self-driving system in all of its vehicles created since 2016, as it promised.

Would it, on the other hand, be worth “essentially zero” if it doesn’t? You’d think so, given that Tesla already makes a lot of money selling electric vehicles driven by humans, but I believe Musk is correct, and it’s all his fault.

Because it has been sold to customers with promises, FSD is a hole that Tesla must dig out of. There will be a reckoning if Tesla fails to deliver on those promises or continues to delay them, and it might be an expensive one for Tesla.

Will Tesla ever be able to fix FSD? Do you believe it will be completed by the end of the year? Will this have a significant influence on the value of the electric vehicle manufacturer?.

Thanks for reading till the end. Comment what’s your opinion about this information “What Elon Musk Just ANNOUNCED About Tesla Changes Everything“.