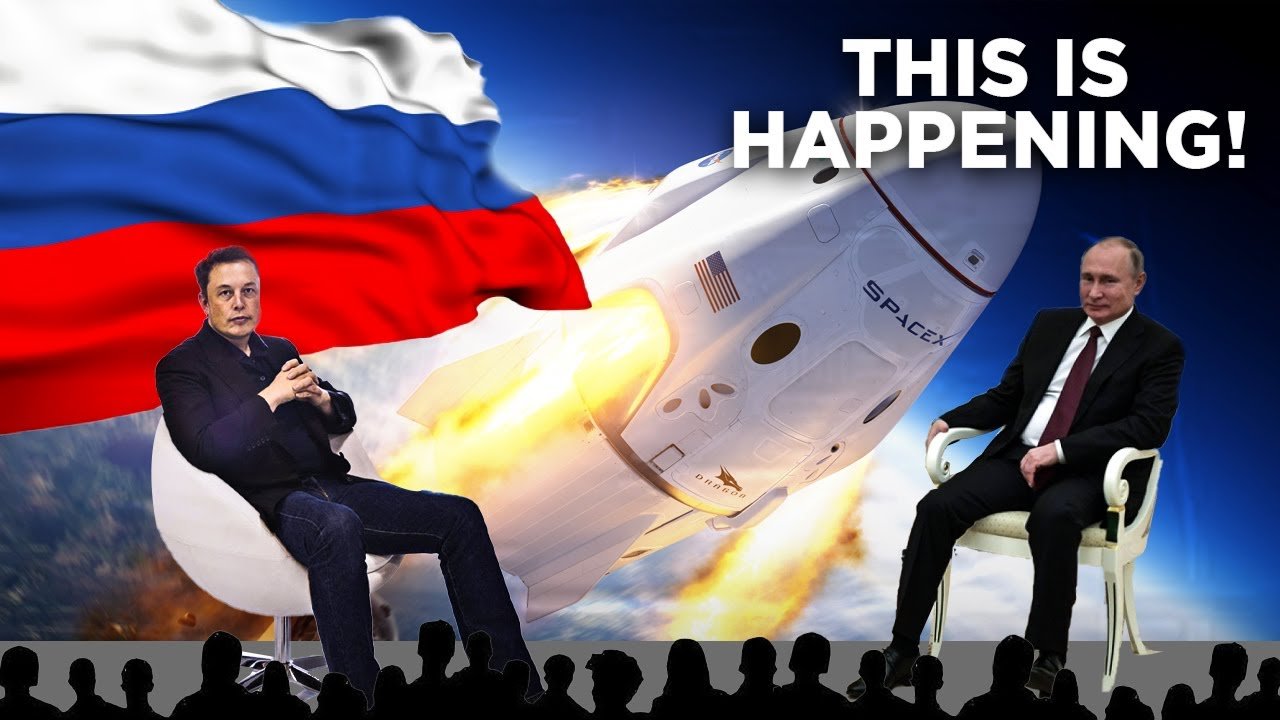 New Partnership Between Elon Musk And Russia Is Affecting The War:- With new space projects coming up every single month from organizations like SpaceX, it only makes sense that cost-cutting per flight is something that should be taken seriously.

While Russian rockets were the primary mode to reach the International Space Station, it has now been well established that SpaceX rockets are much cheaper. Founder of SpaceX, Elon Musk has even said to consider it to be free due to costs as low as $65 million for one launch of the Falcon 9, with hopes to reduce it further.

In such situations, it seems right that the giants shake hands and collaborate. So how does SpaceX plan on establishing relations with Russia? And how can this project be beneficial for establishing extraterrestrial colonies?

SpaceX has now gone international and has flown astronauts representing NASA, the European Space Agency, and the Japanese Space Agency in three crewed launches. However, one country remains absent from this list; Russia.

In the initial days of SpaceX launching rockets, the Russian board had passed comments calling SpaceX inexperienced to carry their cosmonauts to space, but after SpaceX has successfully become the biggest name in the game, it s no surprise that the Russians have officially declared it safe for their cosmonauts to come aboard the crew that will be boarding the Dragon.

Now a particular thing you may have heard us say is calling the Russian space-boarders cosmonauts instead of the more commonly heard astronauts. That is because all people who are trained under NASA, the Canadian, European or Japanese Space Agency are called astronauts and the ones trained under the Russian Space Agency are called cosmonauts, and that s the only difference between the two.

Essentially, their job profiles are the exact same. NASA and its Russian counterpart, Roscosmos, have yet to agree on a system for exchanging seats on journeys to the International Space Station, despite months of talks. NASA astronauts would continue to fly on Russian Soyuz spacecraft, while Russian cosmonauts would board commercial spacecraft such as SpaceX’s Crew Dragon.

While waiting for the first private spacecraft to arrive at the launch pad, NASA has vocally praised the system, and it’s unclear whether any sorts of disagreements are delaying the negotiations.

After the successful launch of the Crew-2 in April 2021, Elon Musk during an interview said “Of course we would be honored to fly cosmonauts on Dragon, but I do not have any insight into any potential objections, Perhaps this may just be a communications breakdown, I don’t know.”

NASA on the other hand has claimed that an agreement is on the way, and it s just a slow procedure to finalise international agreements, and complete formalities In the same new conference, Kathy Lueders, head of NASA’s Human Exploration and Operations directorate said, “We’re working through the agreements right now,”.

“People understand the importance of crew swaps for supportability of ISS and so we’re working through that and getting that agreement in place. It takes a while sometimes, I’ve found out, there’s lots of people to coordinate with so it doesn’t happen as fast probably as I want it to, but we’re working through it.”. Who s to say which one is true? Let us know what you feel in the comments below!

Acting NASA Administrator Steve Jurczyk told Space.com in early February that he believed Russia would need three Crew Dragon missions to be completed safely before putting a cosmonaut on board, but that he hoped an agreement could be reached in time for a Russian cosmonaut to fly on Crew-3, which launched recently on the 11th of November.

But, given how long flight preparations take, Jurczyk stated during a press briefing on April 21 in preparation for the Crew-2 launch, that’s no longer an option, and thus the Russians will probably be looking at a future date with the 4th or the 5th launch.

The recently launched Crew 3 capsule had NASA astronauts Raja Chari and Tom Marshburn, as well as European Space Agency astronaut Matthias Maurer in it. SpaceX’s Crew Dragon capsules can hold up to seven astronauts at a time, although they are currently only equipped with four seats.

Meanwhile, two seats remain open on SpaceX’s next mission, the Crew-4 voyage, which is planned to fly in 2022. So let s hope we can get a cosmonaut on it!

Throughout the life of the International Space Station, the United States and Russia have been the only two of the five partners capable of sending their own astronauts to orbit: crewmembers from Canada, Japan, and the European Space Agency (ESA) have always tagged along.

To transport crewmembers to orbit, Russia has relied on its workhorse Soyuz capsule, which has received periodic modernization upgrades. NASA, on the other hand, began the space station era with a fleet of reusable space shuttles, then remained grounded for nine years while commercial partners created their own spacecraft to transport astronauts to and from orbit.

NASA astronauts hitched rides to orbit aboard Russia’s Soyuz during that time and prior to that, in the aftermath of two fatal shuttle mishaps. Meanwhile, until the space shuttle program was retired in 2011, more than a dozen cosmonauts launched on it.

However, as NASA’s commercial vehicles have progressed, the agency has stated that every journey to the space station will include representatives from both main partner nations. Because the station is divided into two orbital portions, if either Russia or the United States loses its presence in orbit, the laboratory’s side will be left empty.

As a result, NASA wanted its astronauts to continue flying in Soyuz capsules while Russian cosmonauts were to go in new American commercial vehicles, and after years of Russia being skeptical of collaborations with the US, finally, commercial flights are starting to take off.

SpaceX’s Crew Dragon, the first American commercial vehicle, made its first round trip by May 2020. Crew one came back to Earth on May 1, while crew 2 launched on April 23, marking it the first time two crewed commercial vehicles docked to the space station around the same time.

The second vehicle, Boeing’s CST-100 Starliner, has been delayed since an uncrewed test mission in December 2019 failed to reach the space station and landed prematurely; at best, it will fly next year.

NASA has stated for months that it is negotiating a seat exchange arrangement with Russia in order to lead astronaut flights in the future. NASA has purchased seats in batches from Roscosmos since the space shuttle’s demise; most recently, NASA astronaut Kate Rubins launched in October in a one-of-a-kind seat that cost NASA $90 million.

Her seat was rumored to be the final one NASA will purchase from Russia before conducting seat swaps. Although NASA’s Mark Vande Hei launched aboard a Soyuz in April 2021 without the pending agreement, NASA negotiated for his seat with the Texas-based company Axiom Space, pledging to send someone chosen by the company in 2023 instead of paying any money.

According to a Roscosmos statement released at the time, Roscosmos director Dmitry Rogozin invited a NASA delegation to join the April 9 Soyuz launch in a late February call with Jurczyk that included discussion of crew flight arrangements.

According to a separate Roscosmos statement, In Kazakhstan, Rogozin met with Ken Bowersox, NASA’s deputy associate administrator for human exploration and operations, in conjunction with the April 9 Soyuz launch of Vande Hei and two Russian cosmonauts.

A request for information regarding NASA workers who were present at the launch was not responded to. Rogozin’s thoughts on seat swapping were completely hesitant as he has steadfastly defended the Soyuz capsule’s long and spotless track record, especially in comparison to NASA’s shuttle program, which was halted in part owing to reliability issues.

Meanwhile, he has expressed skepticism about the cost of American launch projects, and Russia expressed reservations about the vehicle’s systems’ safety as it neared the space station for docking before an uncrewed test flight of Crew Dragon in 2019.

But good news for those who hope for the collaboration, all these hesitations have now gone under, and we are ready to see a collaboration in the next year. The agency’s main purpose with seat swaps is to ensure that even if something goes wrong with SpaceX’s flight program before Boeing’s Starliner is ready to fly, at least one astronaut will be in orbit at all times.

However, it is unknown how long Vande Hei will remain in orbit. So hearing these concerns and solutions, the only question left is, will Russia and the United States come to a mutual standpoint soon enough now that all trust has been established within the organizations?

Thanks for reading till the end. Comment what’s your opinion about this information “New Partnership Between Elon Musk And Russia Is Affecting The War“.